Or “De Kuip” as it’s known in Dutch, the home of Feyenoord.

Was doing an Amsterdam/Rotterdam double header so popped along to see it.

To give an idea of the stadium’s standing, it has hosted both the European Cup and European Championship Final.

Was easy to get to from the city centre, but it was locked to the public before you get to the turnstiles, so I had to make do with some long range shots.

Visited the club shop and got a cheap Feyenoord away top. Would have loved to have seen a game but the fixture list transpired against me, although I have already seen Feyenoord in action (1999 – a friendly at Windsor Park against Liverpool) and can mark them off my 100 Club list (1970 European Cup winners and UEFA Cup winners in 1974 and 2002) 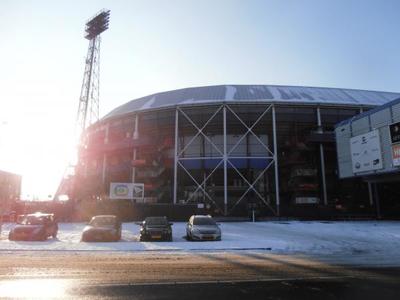