Less said about the football, the better.

Apart from a flurry of corners at the start of the game, Linfield never looked like scoring.

I know it’ s a football cliche, where fans/players says “I don’t care if we lose (x amount of times) to (team) as long as we win the league”, but it has actually happened and it feels quite shit.

Even though today’s result didn’t influence any league positions, I still hate losing to that shower.

With today being the last home game of the season, the stage was set for the presentation of the league trophy.

That, like the match before it (which Glentoran won 2-0, if you’re interested), the trophy presentation was a complete disaster, thanks to one game a season supporters invading the pitch, ably assisted by Scrutini, whose job it is …………. to keep people off the pitch.

Having got set up for shots during the lap of honour, I then headed on the the pitch after everyone else to try and salvage something from the day and get some photos. 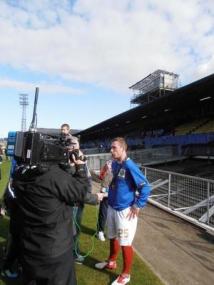 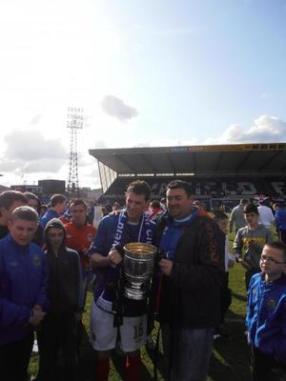 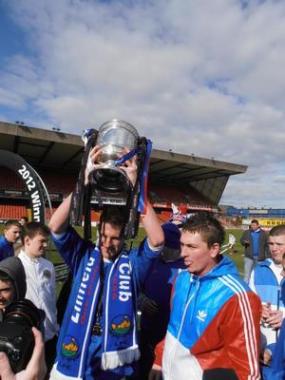 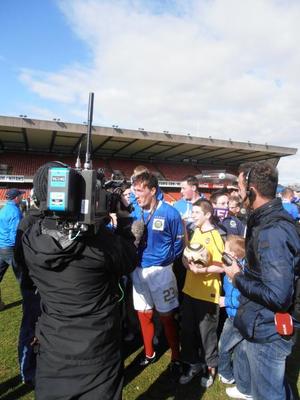 This week saw the announcement of the Peace One Day concert in Ebrington. Not a bad line-up, but Derry Journal reported earlier this week that Noah and the Whale, and Ellie Goulding would be on the bill, which got my hopes up.

Still not sure wether I am going to it, we’ll have to wait and see. Anyway, here’s a Top Five from the line-up.

FIVE SONGS BY ACTS CONFIRMED FOR PEACE ONE DAY

Was at The Oval today for the re-arranged Irish Cup Semi-Final between Linfield and Newry City.

It was originally drawn as Linfield v Ballymena United, but a long drawn out registration dispute saw Ballymena thrown out and Newry reinstated.

Ideally, this game should have been played at Mourneview Park, but the uncertainty over who would be playing, the fact that Mourneview was already booked for the other Semi-Final and that Glenavon were at home today, it became obvious that the default venue of The Oval would be used.

Newry’s support for a match of this magnitude, their first Irish Cup Semi-Final since 1987, was disappointing.

The match itself was a non-event from the moment went 2-0 up after 20 minutes. Soon after, it was 4-0, and any doubt was removed.

Linfield started on the attack, having the possession but not having an attempt on goal.

When Peter Thompson put Linfield 1-0 up, there was always the worry (and, I am a worrier) that they would get a goal from nowhere.

The match ended up 7-0 to Linfield. My highest scoring match been to this season (so far), 28th different team seen and 2nd hat-trick (Peter Thompson)

Was at Windsor Park tonight to see a much changed Linfield team (giving debuts to Ross Clarke and Ross Glendinning) take on Cliftonville in an Irish League clash.

For a team chasing European football, Cliftonville were poor, and were well beaten 2-1 thanks to two well taken Gary Browne goals.

Usual arrangement with regards to photos at Windsor Park, not the best of venues for phototaking and have to make do. Managed to get some not bad shots and some sunset shots outside the ground before the game.

Was at Windsor Park today for the Irish League clash between Linfield and Portadown.

For long periods, the game had 0-0 written all over it. Linfield took the lead through Phil Lowry, before Portadown equalised. It looked like being a frustrating day before Jamie Mulgrew won it late on.

Watched the second-half in the South Stand as that’s where Linfield were attacking, and managed to get some OK photos.

Hopefully, when the trophy gets presented (presumably on April 28th, after the match against Glentoran) there will be (a) better weather (b) and that the one game a season dicks stay the fuck off the pitch, ruining the lap of honour for everyone else. 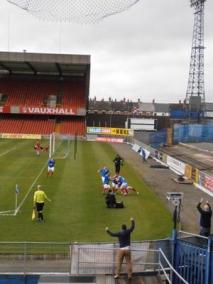 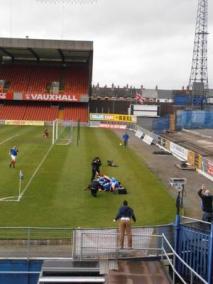 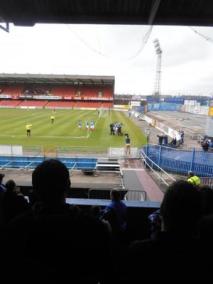 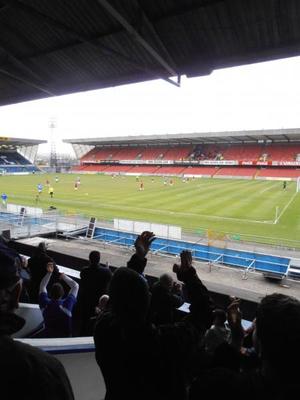 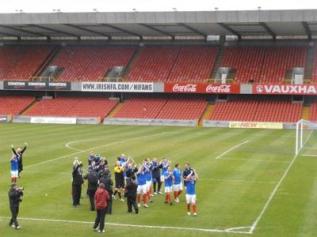 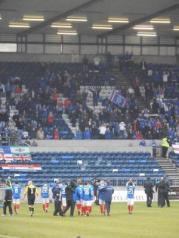 Spotted some new graffiti over the past few weeks, so naturall, I took photos of it.

Some updated ones from Great Victoria Street, news ones from Botanic and Lagan Towpath.

For the background to the last picture, I suggest you check out this blog from April 2010.

Was out during the last week making the most of the brief summer weather and got photos around Lagan towpath and Ormeau Park.