Was in London over the weekend, so decided to take in two matches …. on the same day.

The first game was at lunchtime, at Loftus Road, as QPR took on Norwich.

I arrived at the ground early, and had time to kill, spending some at the nearby Westfield Shopping Centre. It was at the club shop at Loftus Road, that the most curious shopping experience came, as you could buy a Tony Fernandes gnome, or a model QPR plane.

The main attraction in merchandising terms was Ji Sung Park. You name it, you could buy something with his image on it in the club shop. There were quite a lot of people from South Korea purchasing it. Maybe that’s QPR’s business plan to pay their players if they get relegated?

Was behind the goal, the one to the left of your TV screen, below the Norwich City fans. Had a brilliant view and got some nice photos.

The match itself was very dull. The hightlight of the game came when fans taunted their rivals with “Peter Odemwingie/Gary Hooper ….. would’ve scored that” when an opportunity was missed.

QPR missed the biggest opportunity of all, a penalty early in the second-half.

Some games, you just know are going to finish 0-0. This, was one of them. 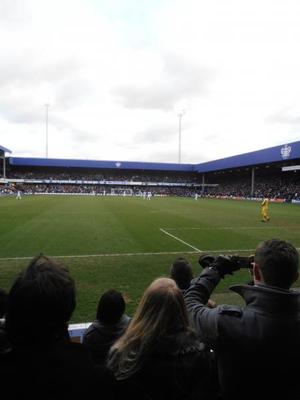