Having been in Glasgow over the weekend, I decided to take in the Scottish Cup Semi-Final at Hampden Park between Falkirk and Hibernian.

I turned up and got a ticket on the day with no problems from a ticket booth outside the ground. It was only 15 quid, which wasn’t bad for a match of this magnitude, seeing as I had paid the same amount for a friendly at Ibrox three days earlier.

I had the choice of ends, so went for the Falkirk end. Nothing against Hibs, I just fancied cheering on the underdogs.

My seat was right at the back of the stand behind the goal (to the left of your TV screen) but there were enough empty seats for me to head down for a closer view of the pitch.

That said, the seat I had at the back of the stand had a fantastic view.

Just over five minutes in, Falkirk went 1-0 up and the end I was in went delirious. Hibs missed an amazing chance to equalise. You need to Youtube it. It was easier to miss, but the player lost his composure.

In fact, the whole Hibs team had lost their composure, as Falkirk looked more comfortable with and without the ball.

By 29 minutes, Falkirk were 3-0 up. I looked around and saw people in disbelief. Falkirk deserved this lead.

At half-time, I walked around the forecourt, and saw grown men hugging each other in disbelief. I imagine it was probably the same in the Hibs end, but for opposite reasons.

When it went to 3-0, there were Hibs fans leaving the ground. The anger was clear to see. Every misplaced pass was met with groans.

The second-half was entirely different, with Hibs fans having a more United front, getting behind their team. Instead of groans, misplace passes were met with words of encouragement.

When coming from 3-0 down, you need an early second-half goal. When the ball went in, there seemd an inevitability that Hibs would go on to win.

The onslaught never happened. With each passing minute, Falkirk fans around me dared to believe they would win, especially when Leigh Griffiths missed a penalty.

That hoped was dashed when Hibs scored twice in five minutes to send the game to extra-time.

Despite a breather between full-time and extra-time, once the game restarted, it was all Hibs, and they went 4-3 up through Griffiths.

From there, Hibs didn’t look like losing the lead, though Falkirk had a great chance towards the end of the game.

It was an enjoyable game to be at as a neutral, maybe not so if you support one of the two teams, especially Falkirk. 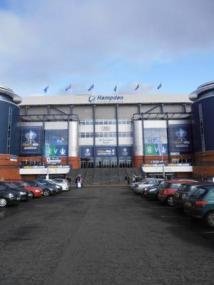 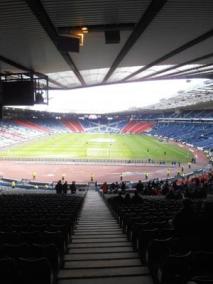 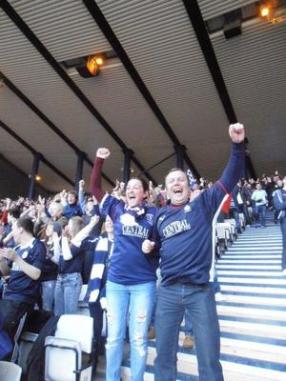 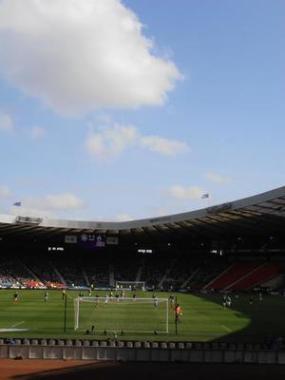 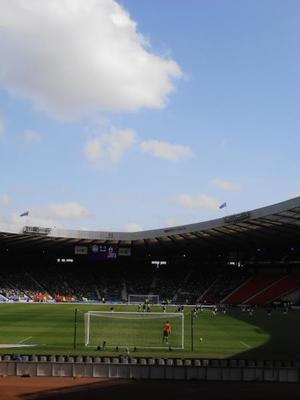