Sheffield Wednesday’s on form striker Garry Thompson is the cover star, in a week where Shoot speculates that Manchester United might be trying to sign Sammy Lee from Liverpool.

Lee is the subject of a double page feature, where he states he is aiming to make up for lost time after a disappointing 84-85 due to injuries and loss of form.

Lee was linked with Manchester United by Shoot, whose Danish defender John Sivebaek has revealed he joined United for money, while manager Ron Atkinson revealed that it was his goal against Republic Of Ireland in a World Cup Qualifier which prompted United to sign him, beating off competition from Spurs, Celtic, Atletico Madrid and Club Brugge.

With the World Cup approaching, Shoot looks at the chances of those wanting to go. They did a report on Terry Fenwick’s performance during QPR’s 1-1 draw with Luton, concluding that he is being wasted in midfield.

One player not going to Mexico was Remi Moses, who would be missing out through injury. Bryan Robson writes about this in his column, and also states that Mark Hughes wants to stay at Manchester United, and then promotes his fan club, which you can join for £3.50 a year if you live in the British Isles.

In news, Reading’s Andy Rogers was saved by the club’s physio after he collapsed during a recent game.

Shoot reports that Barcelona are looking at Mark Hughes, while Gary Williams is set to leave Aston Villa after a bust-up with manager Graham Turner.

One player agreeing with his manager was Peter Rhoades-Brown of Oxford, whos manager Maurice Evans described him as inconsistent.

Jimmy Greaves Star Letter comes from a Scotland fan complaining that it was unfair that Belgoium were considering playing their Euro 88 Qualifier against Scotland to a neutral country, due to the fear of hooliganism.

John Bond gets a double page spread, with the recently appointed Birmingham City manager stating that he can revive the club. They were relegated in 1986, and almost get relegated again in 1987, before Bond was sacked.

In foreign news, Andreas Brehme has signed a pre-contract with Bayern Munich, while Janusz Torowski and Jaroslaw Biernat have both signed for Eintracht Frankfurt, but won’t be going to the World Cup, having claimed asylum in West Germany.

Shoot is in the World Cup mood, doing a double page feature on Denmark, comparing them to the Holland side of 1974 and 1978.

Peter Davenport’s chances of going to Mexico received an endorsement from his manager at Nottingham Forest, Brian Clough, who wrote a column to urge England manager Bobby Robson to put him on the plane.

Talking of managers, Kenny Dalglish picked up his first Manager Of The Month award, but defeat to Everton ruined his day when he was presented with the award.

A future manager, was Alan Curbishley of Charlton, who was on the pitch for them in 1986, leading their promotion charge as they aimed to reach the top flight for the first time since 1957.

In Scotland, a former Rangers man has done Celtic a favour, as Mo Johnston has had a run of form kickstarted by being dropped from the Scotland squad by Alex Ferguson.

Brighton get a full page profile, as they aim to be promoted back to the top flight after being relegated in 1983.

Returning to Scotland, Shoot previewed the Scottish Cup Quarter-Finals between Hibs and Celtic, and Aberdeen v Dundee. At the time of going to print, they were the only two Quarter-Finals definitely confirmed. 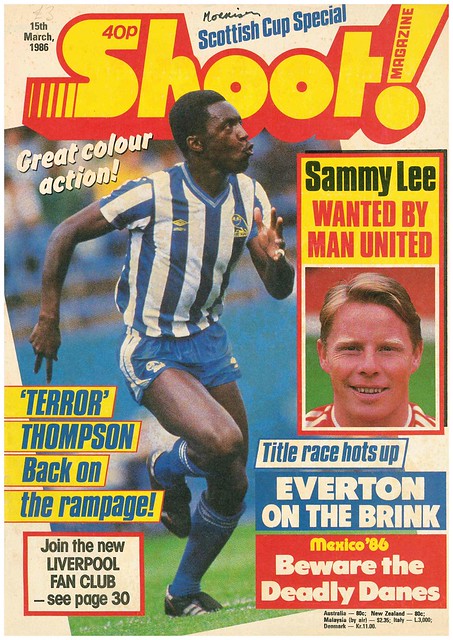 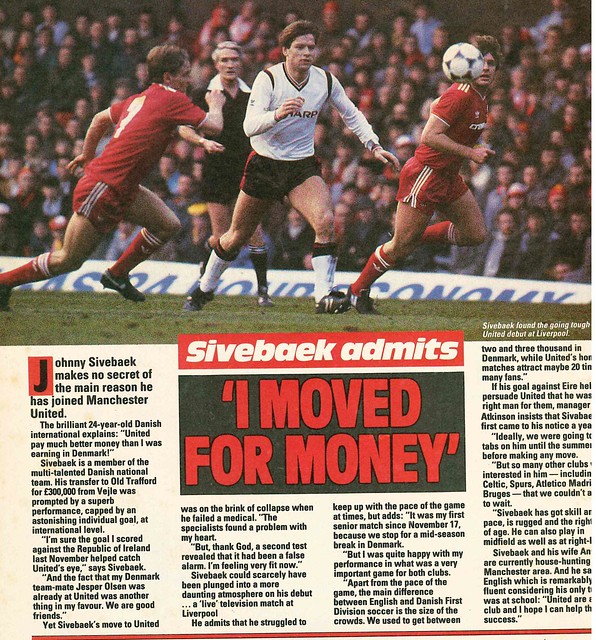 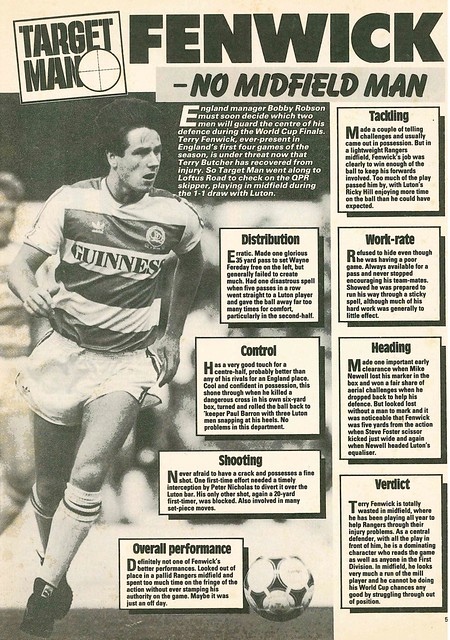 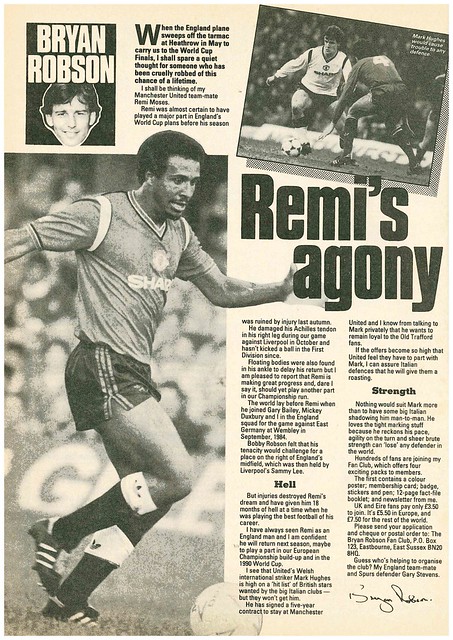 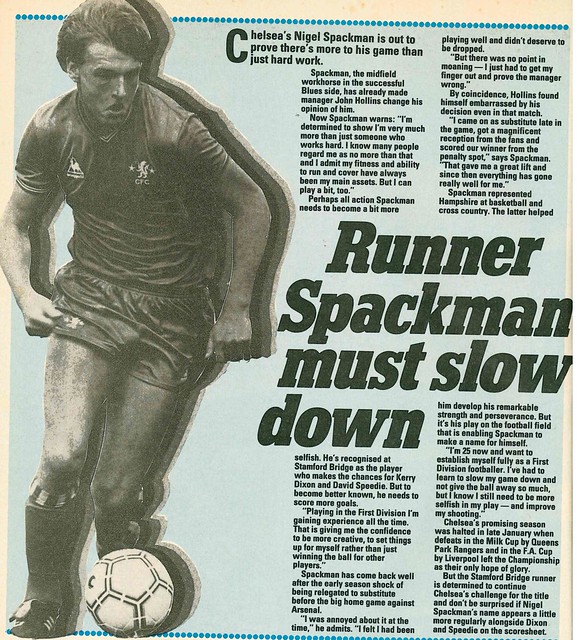 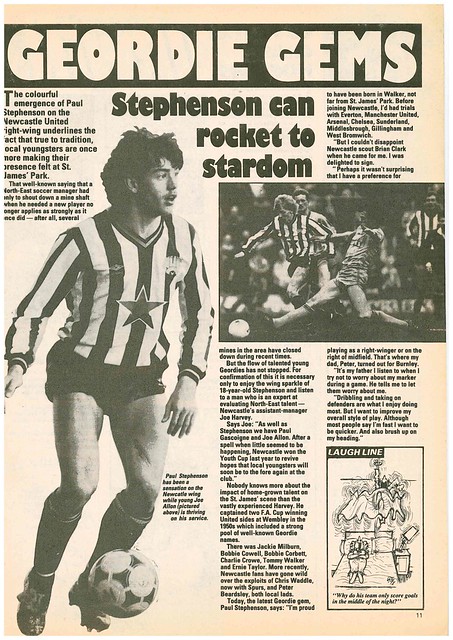 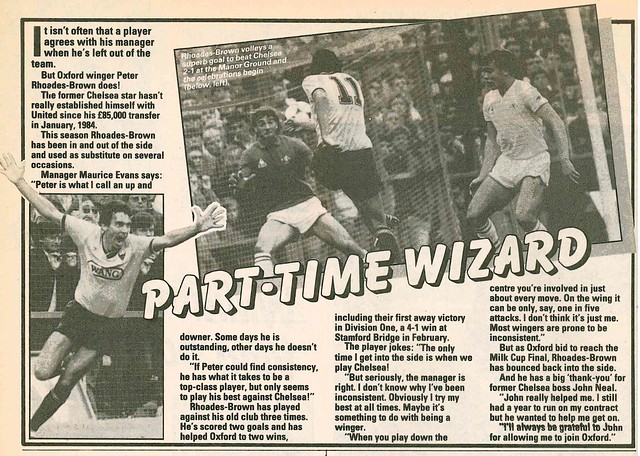 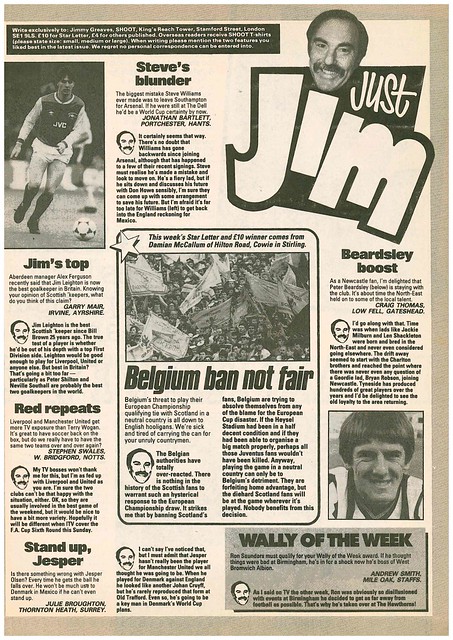 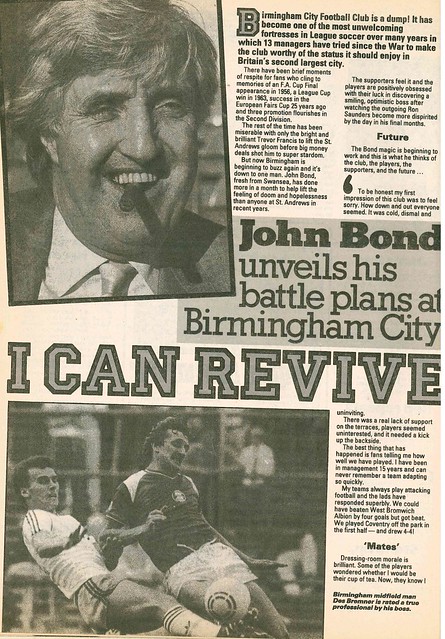 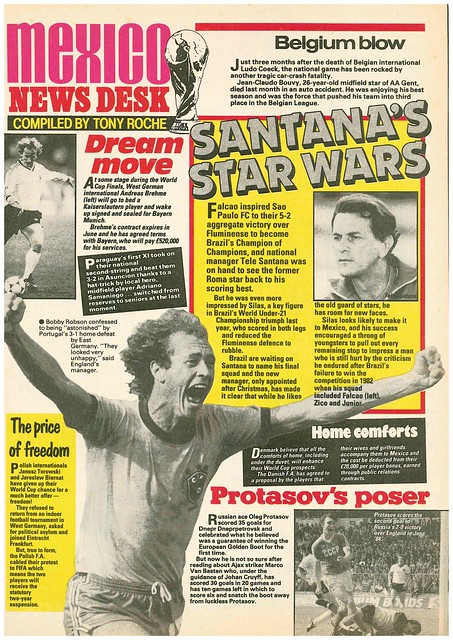 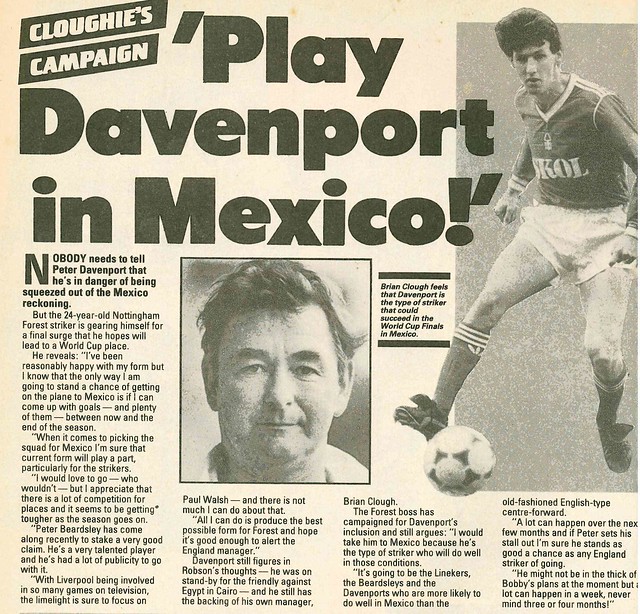 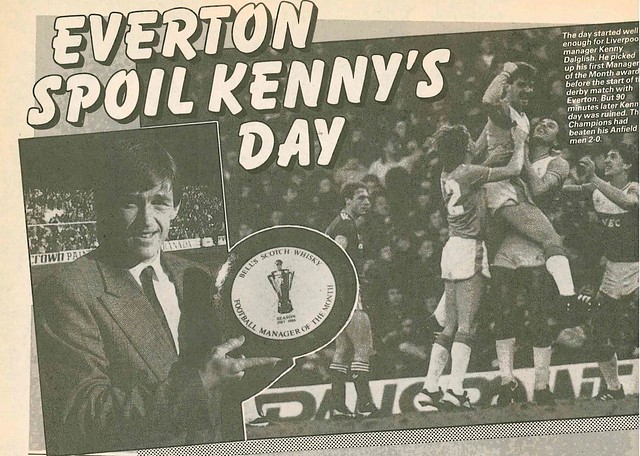 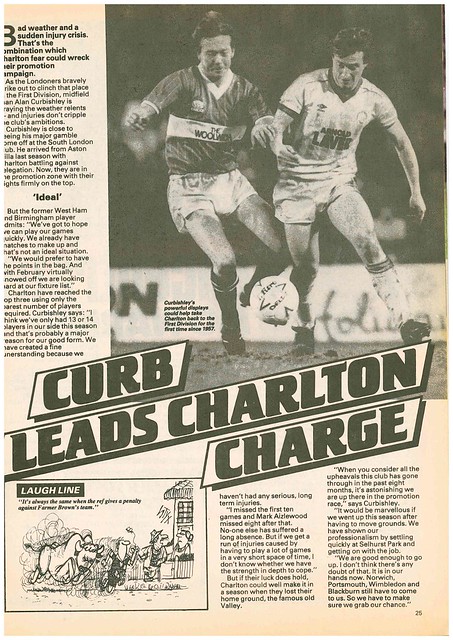 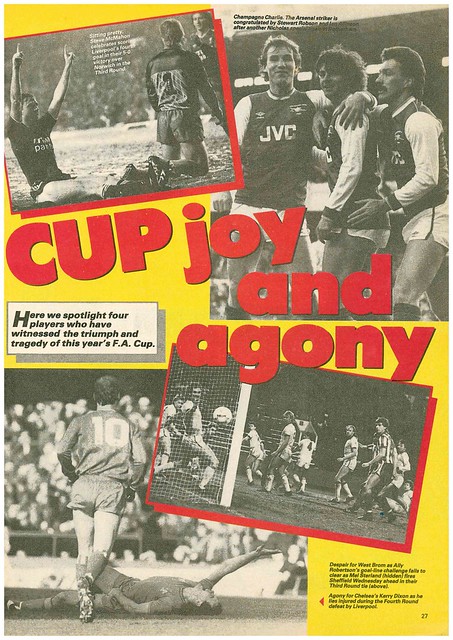 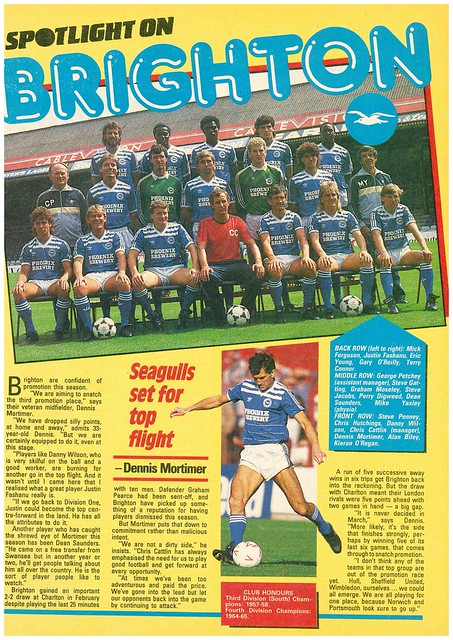 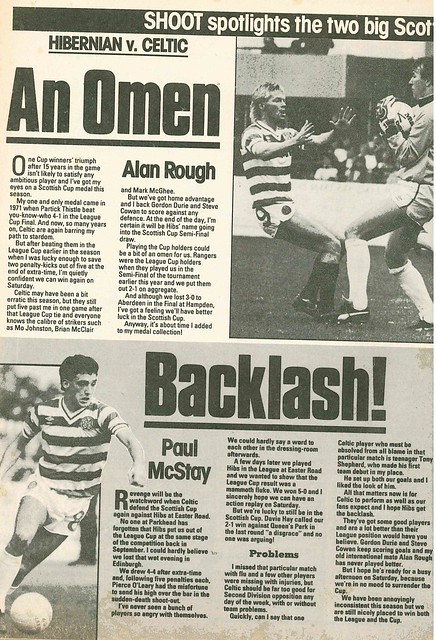 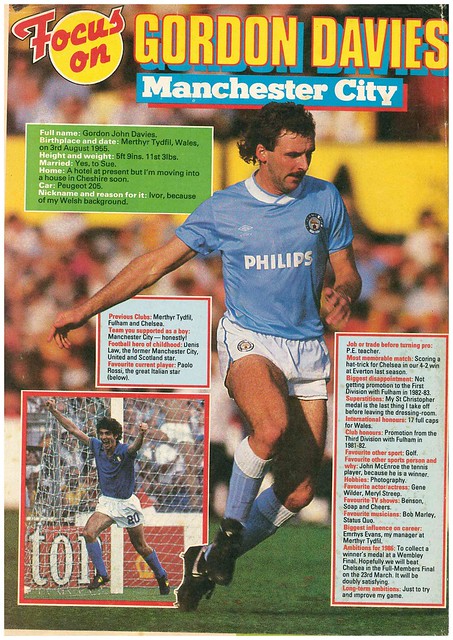