Ronaldinho is the cover star of World Soccer with the headline “THE TWO RONNIES”, not a reference to him doing a sketch show with Ronaldo, but the differing on and off-field life he leads.

The recent transfer of David Beckham from Manchester United to Real Madrid gets four pages of coverage, and what it will mean for player and club.

Summer transfers are the main topic in this magazine, with Italian clubs shopping in the bargain basements.

Manchester United are armed with cash after the sale of Beckham and are linked with either Damien Duff or Harry Kewell, as well as Eric Djemba-Djemba and Tim Howard.

In Germany, Bayern Munich are eyeing up moves for Roy Makaay and Martin Demichellis.

There is a Q and A with Deco of UEFA Cup winners Porto, who considers Portugal his home now having played there for six years, and got a call-up to the national team despite being born in Brazil.

At Napoli, there is an interesting name at their youth team, Diego Maradona Jnr, the estranged son of the Napoli legend.

There is a double page feature on cover star Ronaldinho, then of Paris Saint Germain, but set to be a Manchester United player in a matter of time according to World Soccer.

The monthly Soccer Cities feature does a region instead, The Ruhr in Germany, home of Schalke and Borussia Dortmund.

There is a six page review of the recent Confederations Cup, a tournament marred by the tragic death of Marc Vivien Foe, a tournament which was described by Keir Radnedge as cheap and demeaning before Foe’s death.

There is a full page report on Real Madrid winning La Liga thanks to a win over Athletic Bilbao, a result which ironically helped Barcelona to sneak into the UEFA Cup.

In England, Michael Owen became the youngest player to win 50 caps, while Northern Ireland got a creditable draw against Spain, but it meant they continued a scoreless run of 972 minutes.

Porto added a domestic double to their UEFA Cup, but he local council chairman wouldn’t meet the team as he supports Boavista. There was more good news for Porto as manger Jose Mourinho committed his future to the club until 2006.

Staying with Porto, there is a profile of Helder Postiga, who has just left Porto for Tottenham Hotspur.

In South America, there is a profile of Boca Juniors striker Carlos Tevez, who has attracted the attention of Barcelona and Bayern Munich, but a clue to his future destination could come in the shape of him describing his post treasured possession as a Manchester United shirt given to him by David Beckham after a friendly between United and Boca the previous summer.

In Africa, Nigeria reach the finals of the African Nations Cup, while there is a profile of Aruna Dindane.

The magazine ends with Brian Glanville’s column, which states that David Beckham deserved better from Manchester United than the manner of his departure to Real Madrid. 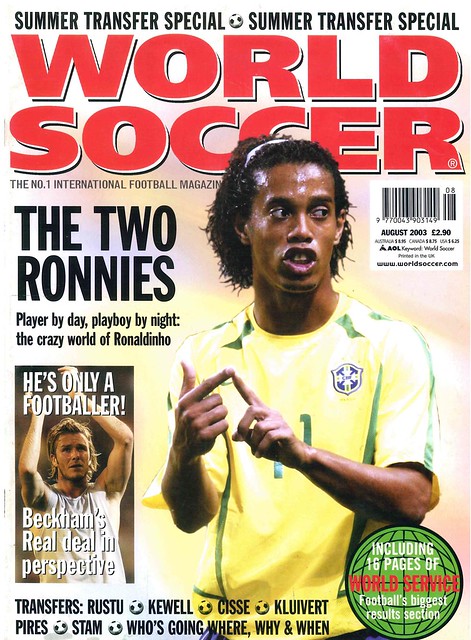 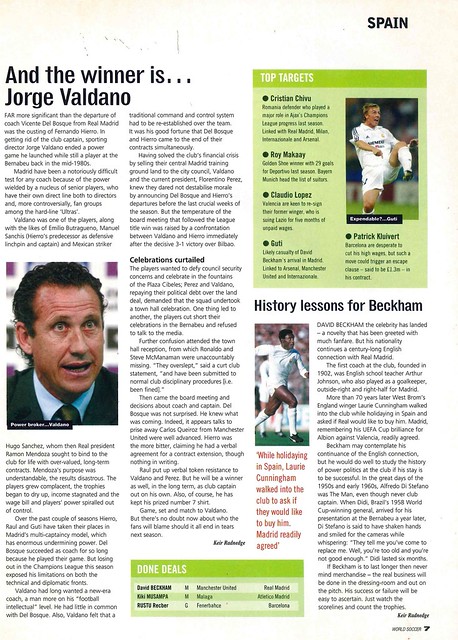 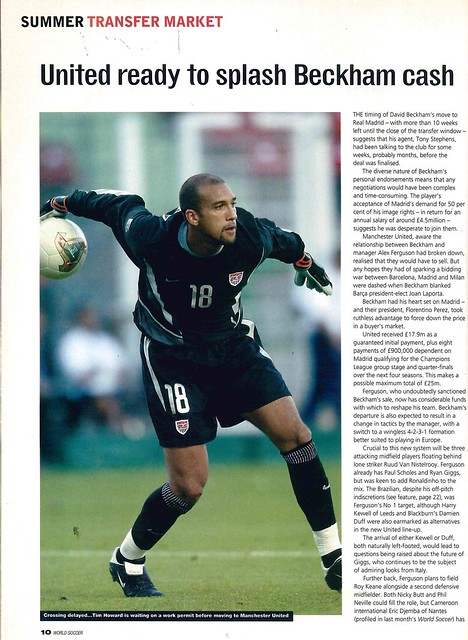 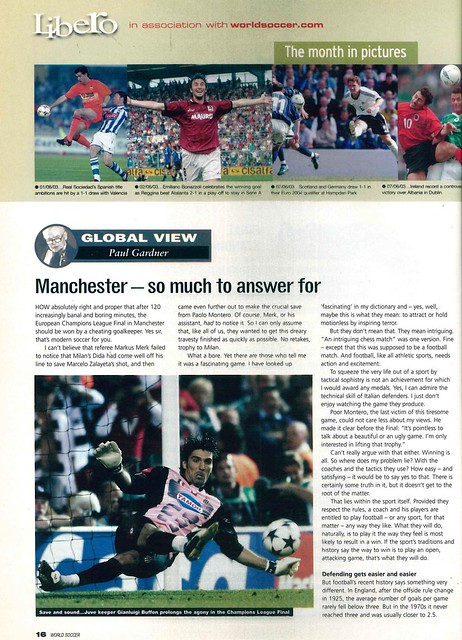 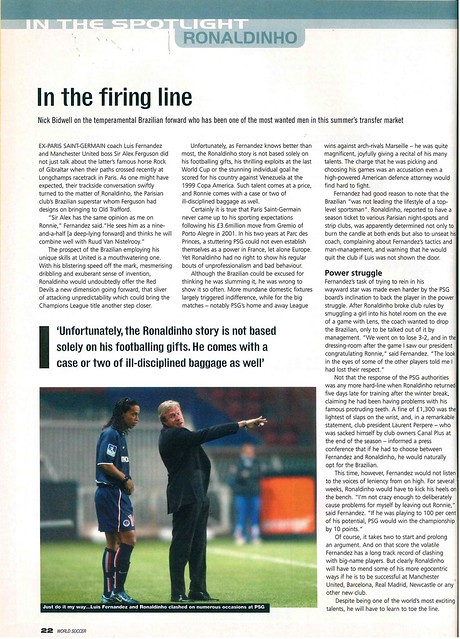 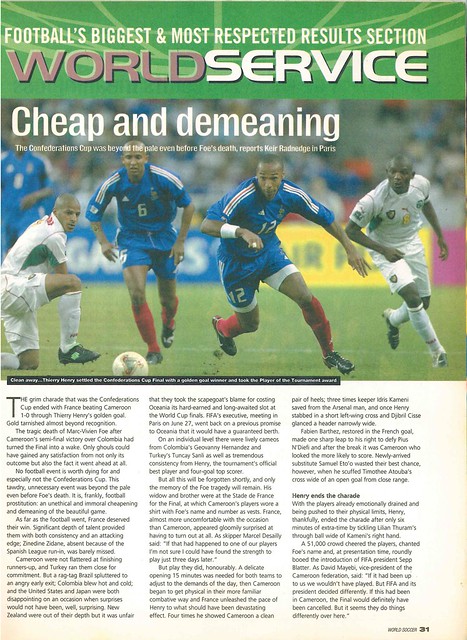 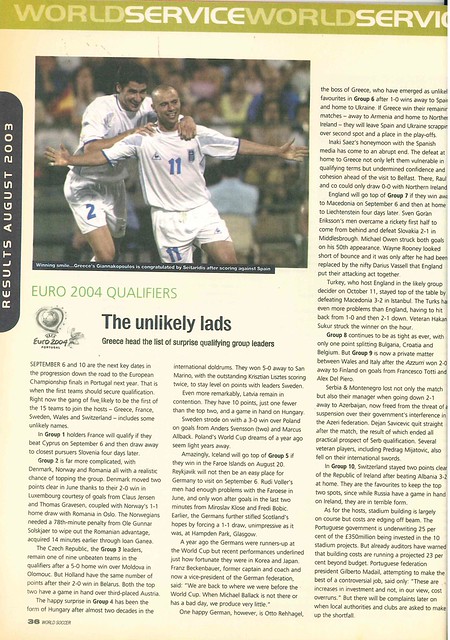 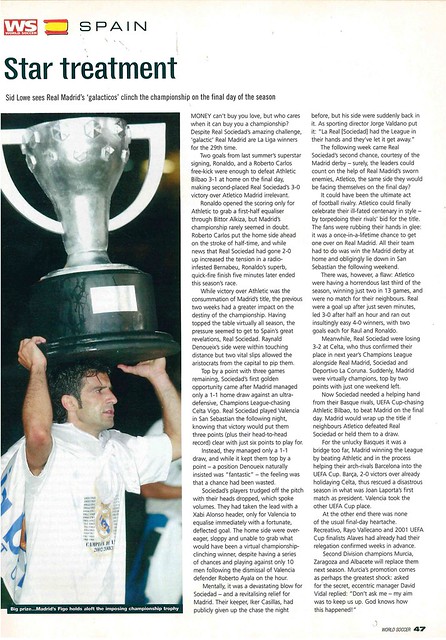 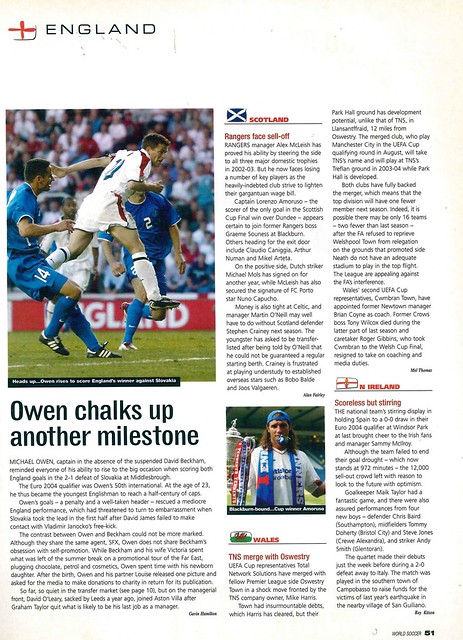 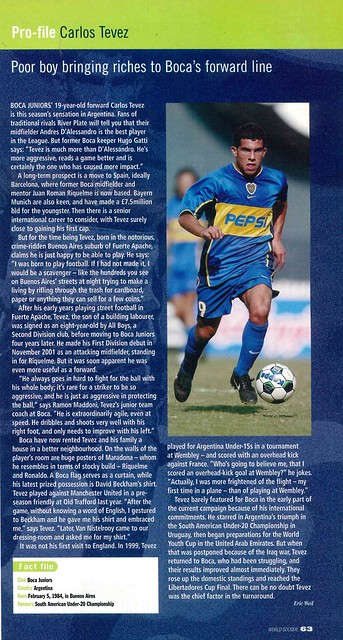 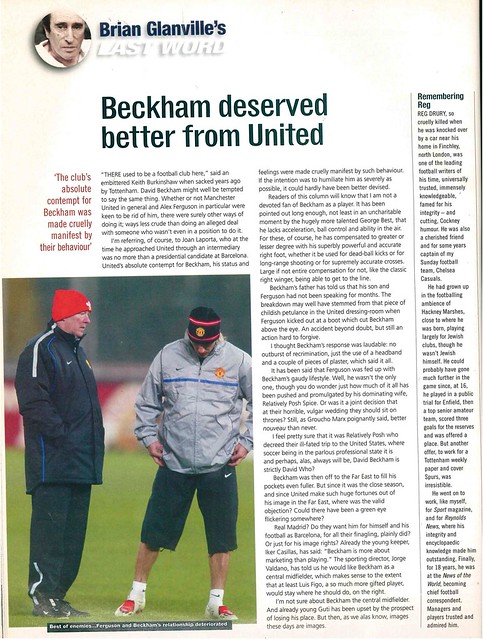