Charlie Nicholas is cover star of Match as he reveals he won’t be returning to Celtic.

The reason for that, were recent comments made by Mick McCarthy of Celtic, who said that Scottish football was better than English football.

A series of players voice their opinion, include Charlie Nicholas, Steve Bruce and Andy Goram give their verdicts. Charlie Nicholas said he would prefer to play for Arsenal, while Steve Bruce says there are only two teams worth playing for in Scotland.

Match looks at the signings made in the summer of 1986 and rates them, the best being Paul Power of Everton and the worst being Neale Cooper of Aston Villa.

Match looks back at Aston Villa’s League Cup winning team of 1977, profiling where they are now.

There is a double page profile on Charlton’s win over Leeds United in a Play-Off (after 1-0 home wins in both legs) Replay to stay in Division One.

In Scotland, Gordon McQueen has just been appointed as manager of Airdrie.

In Division Three, there is a full page profile of Swindon Town, who beat Gillingham in a Replay to get promoted to Division Two. 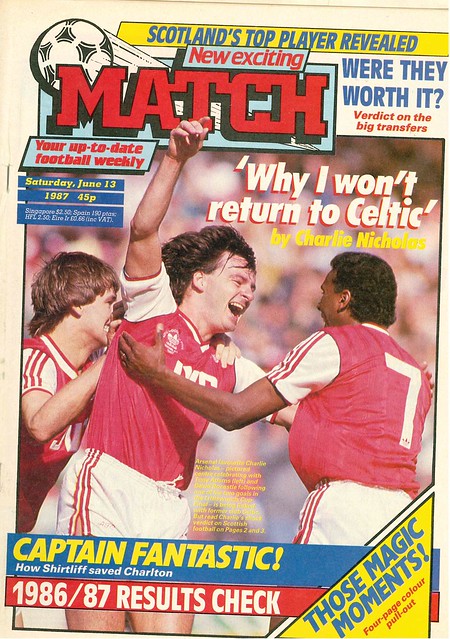 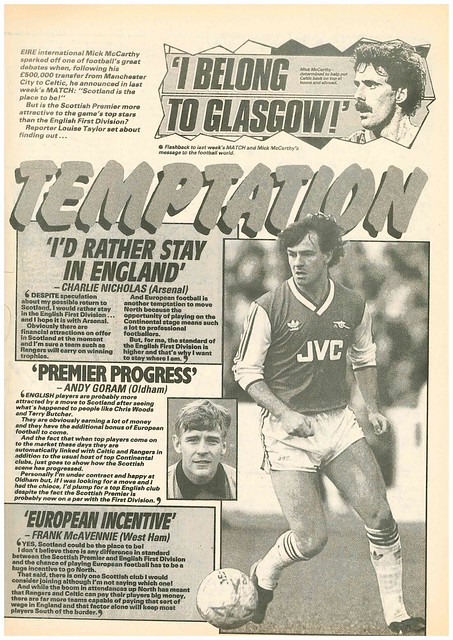 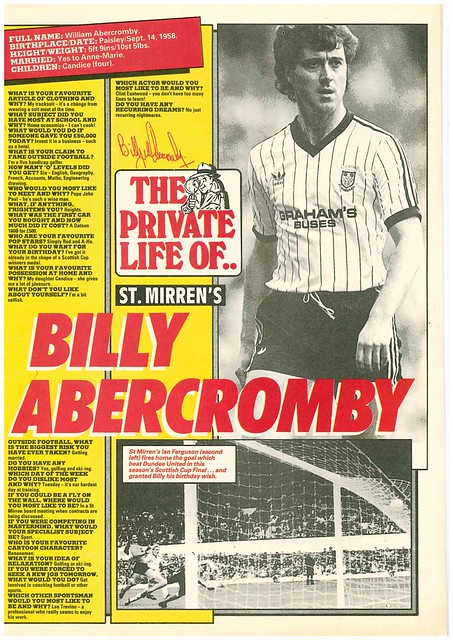 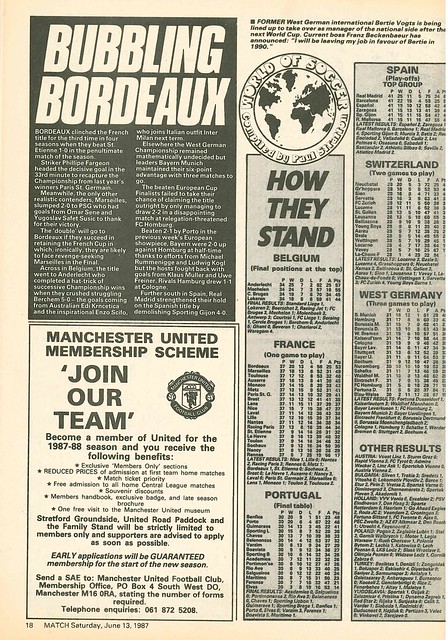 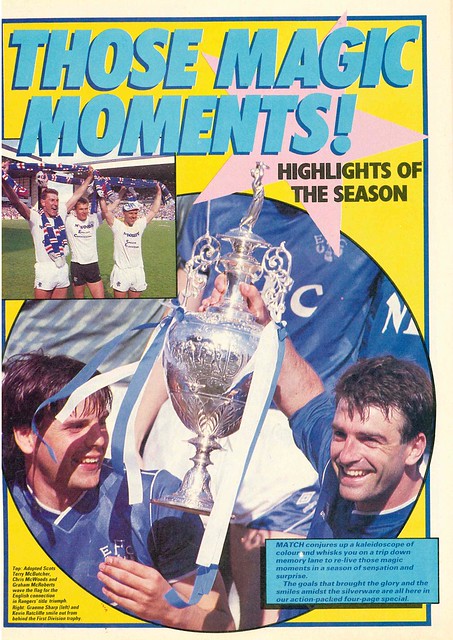 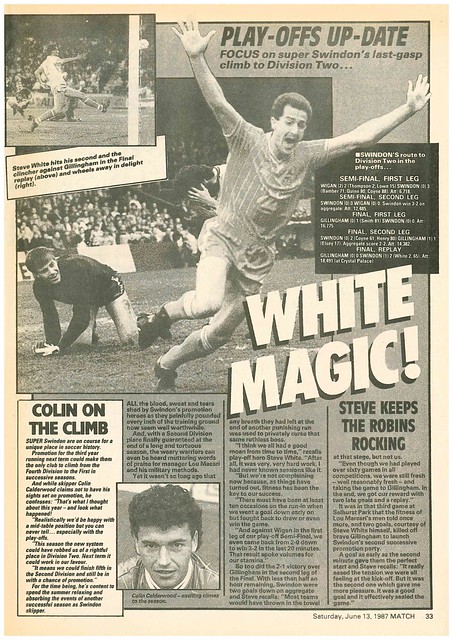 Match action from Derby v Newcastle is the cover image as Shoot gets ready for the start of the 1976-1977 season.

Kevin Keegan uses his column to state what his main aim is for 1977, for Liverpool to become the third British club to win the European Cup.

One man who has recently experienced European success if Ivo Viktor, who tells Shoot that he never thought Czechoslovakia would win the final of Euro 76 against West Germany.

Shoot does a double page feature on clubs in English football who have conceded over 100 goals in a league season.

John Tudor of Newcastle United is interviewed as he makes his comeback from injury, aiming for a move to a club in Mainland Europe, and stating that a breakaway Super League of England’s top 17 clubs would be beneficial for English football.

Alan Curtis of Swansea City gets a feature, being described as “The Welsh Mike Channon”

Billy Bremner reveals in his column that he was recently at Ashton Gate with his Leeds United team-mates to film a TV show called All In The Game for ITV, a football version of It’s A Knockout.

There is a four page feature of French champions Saint Etienne, including a double page centre spread poster.

Gerry Francis uses his column to talk about his favourite ground, which he reveals to be Old Trafford.

Everton goalkeeper Dai Davies is interviewed, warning Liverpool that the limelight could soon be switching to Everton.

Saint Etienne had beaten Rangers en route to reaching the 1976 European Cup Final in Glasgow, and John Greig uses his column to say that Rangers have learnt from those games as they aim to add the European Cup to the European Cup Winners Cup in 1972.

Staying in Scotland, there is a one page feature on the two Dundee clubs. United are aiming for a Top 5 finish, while Tommy Gemmell has renewed his contract with Dundee. 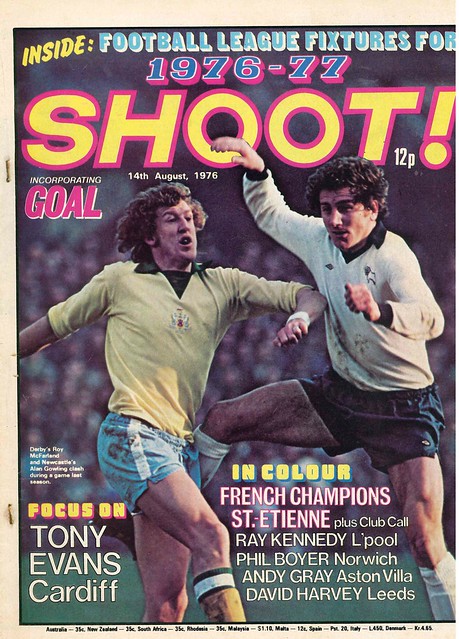 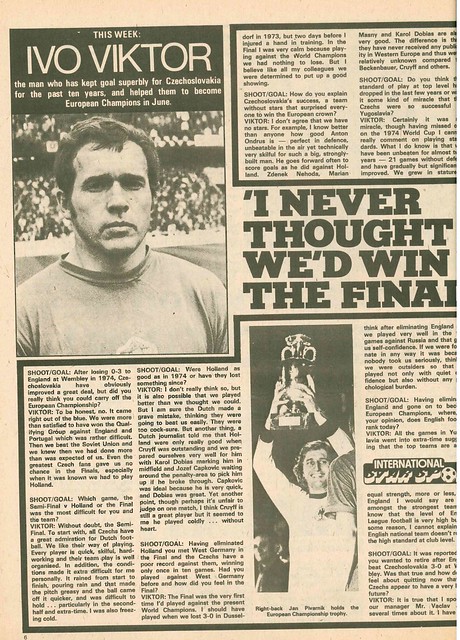 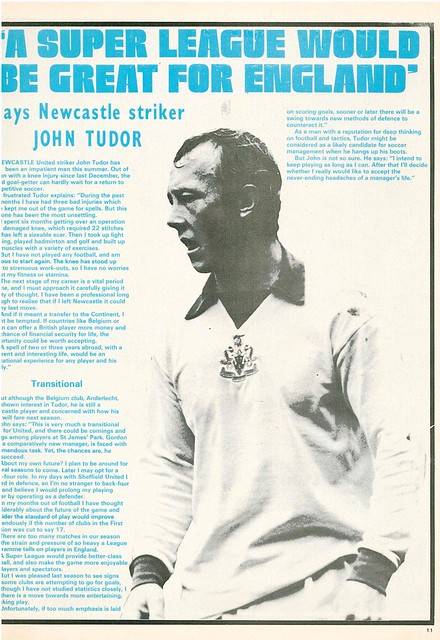 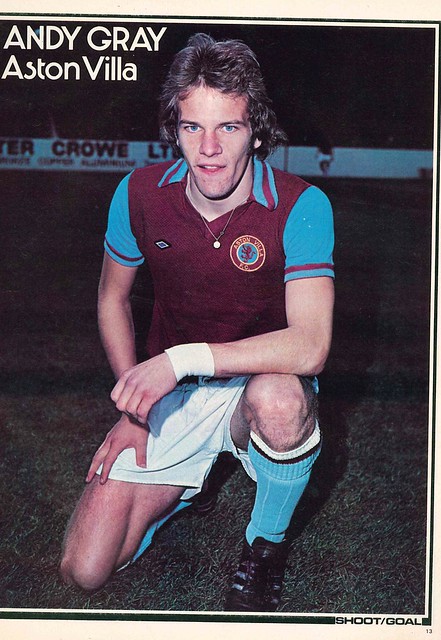 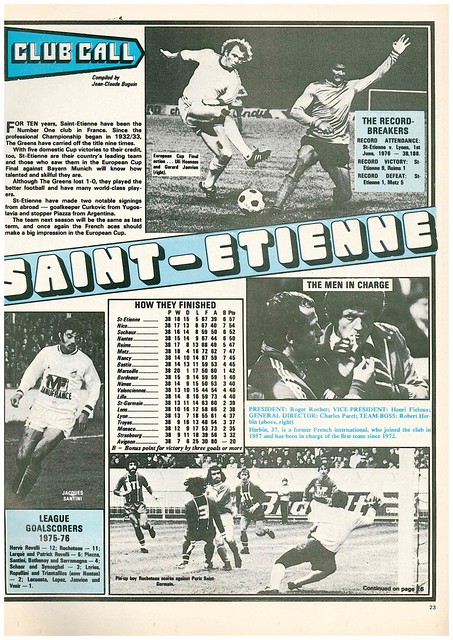 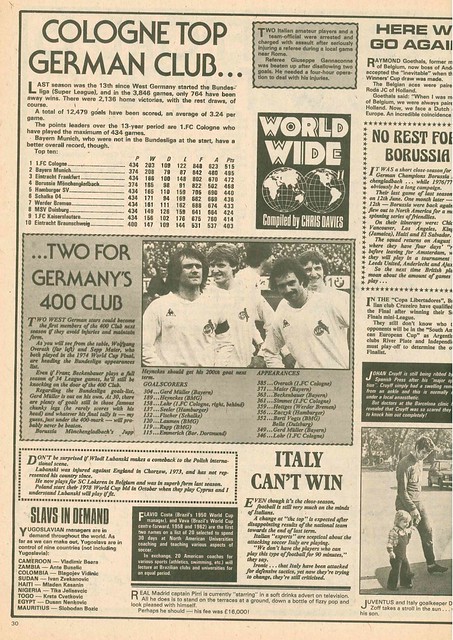 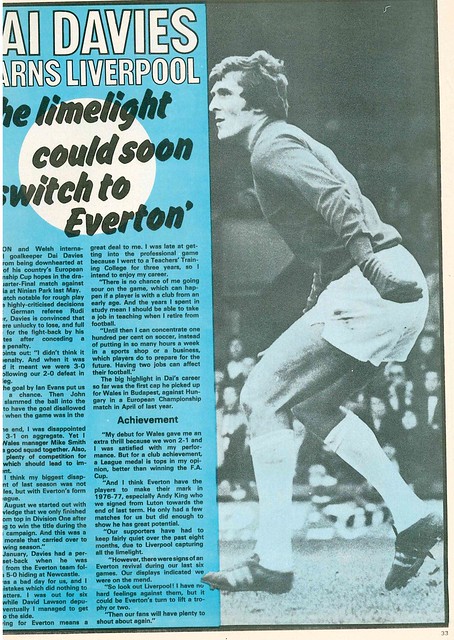 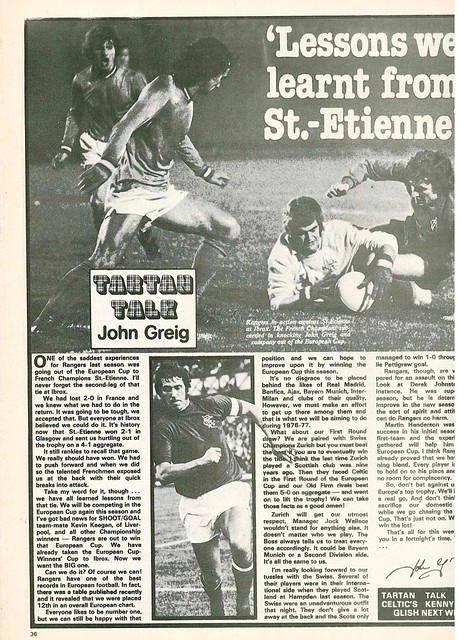 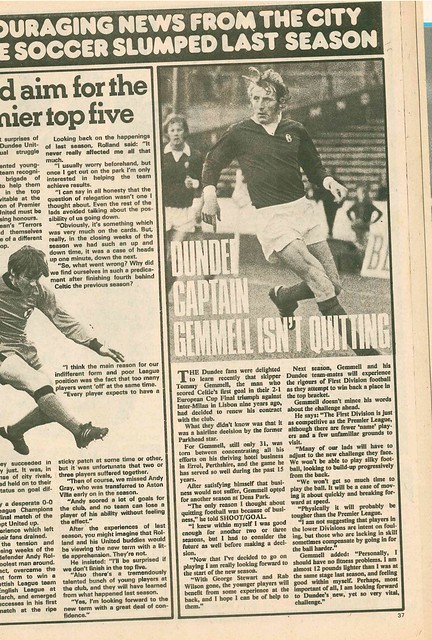 Youri Djorkaeff of Inter Milan is the man of the moment towards the end of the 1996/1997 season, and this is reflected with being on the cover of Football Italia.

The editorial focuses on the good vibes in Italian football – the national team are storming to the World Cup while their clubs are aiming for a clean sweep of European trophies.

There is a review of the League Cup Final in England. Why? Fabrizio Ravanelli and Middlesbrough were aiming for glory. The game between Middlesbrough and Leicester finished 1-1 and would need a replay.

In news, Inter Milan manager Roy Hodgson announced he would be leaving the club to join Blackburn Rovers, to replace Sven Goran Eriksson, who accepted the job but changed his mind before taking charge.

There is a review of the Quarter-Finals for all three European competitions, as Juventus face a European Cup Semi-Final against Ajax, in a repeat of the previous year’s final.

There is a review of the Coppa Italia Semi-Finals, which will see Napoli take on Vicenza in the final.

There is an advert for Chelsea’s official magazine, partly due to the Italian trio of Vialli, Zola and Di Matteo.

There is a three page feature on what Italy’s team for the 2006 World Cup would look like. The only one they had was Gianluigi Buffon.

Gianluca Festa gets profiled having signed for Middlesbrough, who says he is up for a relegation scrap even though Paul Ince says they are too good to go down.

Previews of upcoming matches predict that Juventus will be champions within the next month. 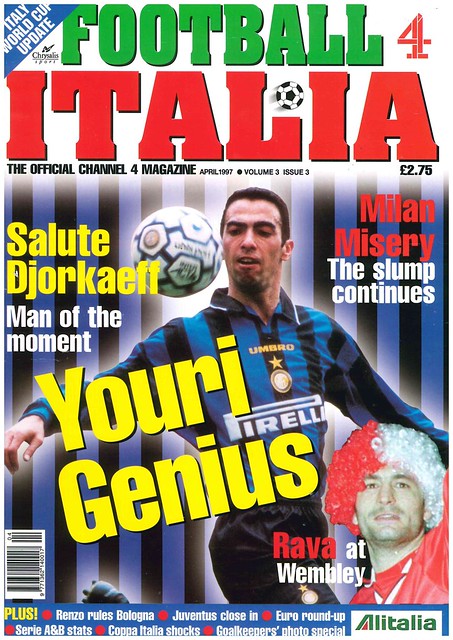 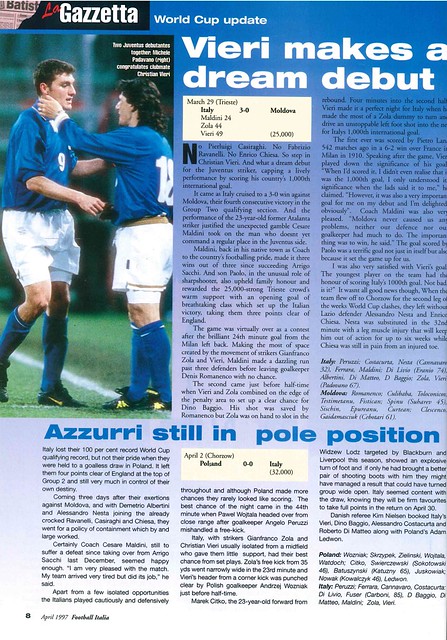 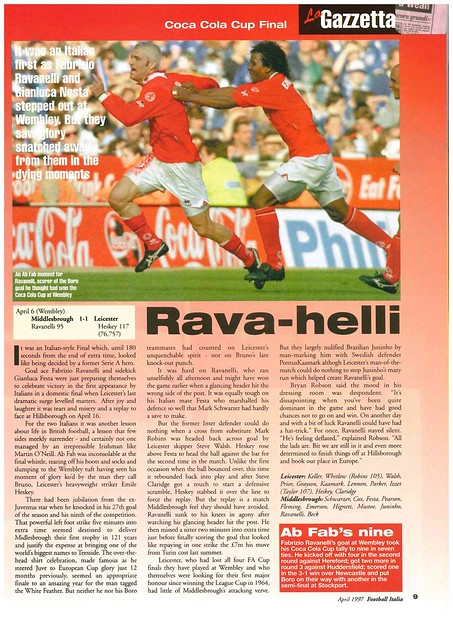 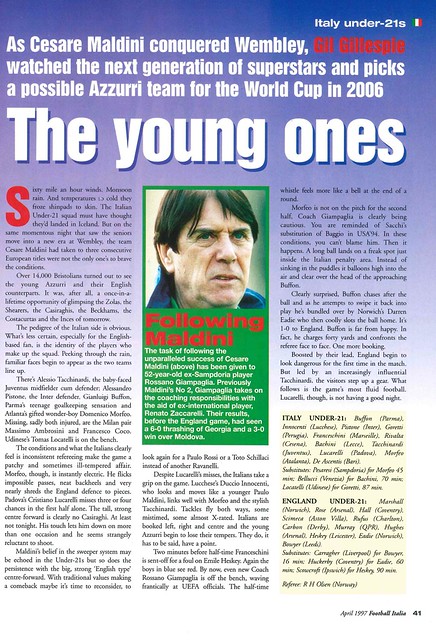 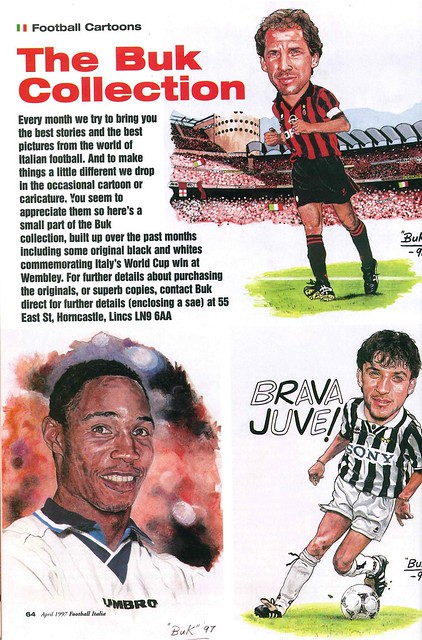 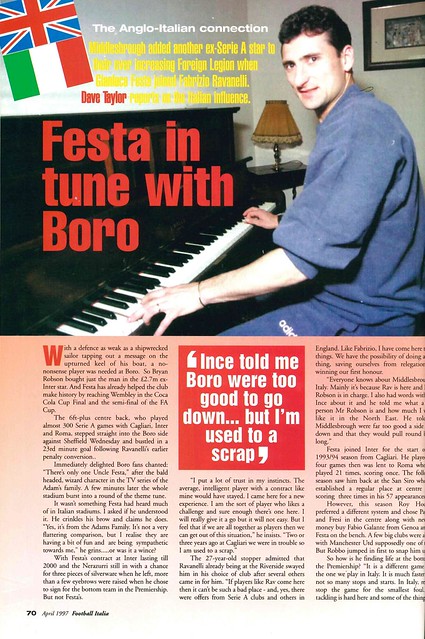 Paul Scholes is the cover star of Manchester Untied’s official magazine as the 1998-1999 season nears it’s end, a season finale that would be mixed for Scholes.

In news, there is a film about George Best’s life in production, due for release in 2000.

Elsewhere, David Beckham has become a dad for the first time, with odds already being offered on a range of life events including playing for United or having a number 1 single.

Cover star Paul Scholes gets a five page interviews where he discusses his recent hat-trick for England against Poland and declares that he never wants to leave United.

There is a look at player’s digs and the landladies who have housed young United stars in the past and present.

United manager Alex Ferguson uses his column to deny that he has any immediate plans to retire, even if United win the European Cup, as he celebrates 25 years in football management.

Henning Berg gets a four page interview ahead of the title run-in, stating that he hopes his former club Blackburn avoid relegation.

There is a look back at United’s games in March and a preview of May’s games. Just the five games, but that could increase depending on cup results in April, as yet unknown at time of going to press. 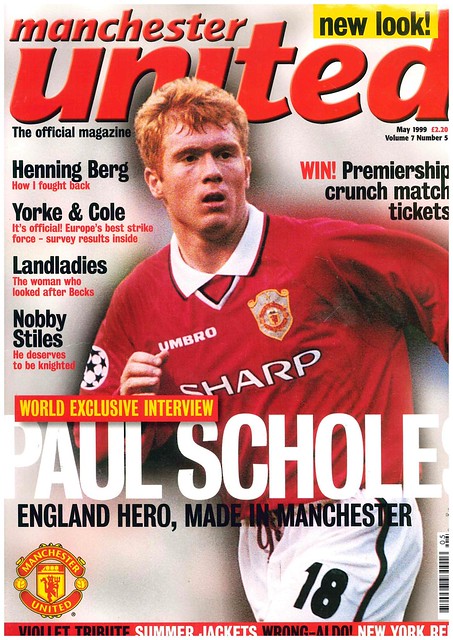 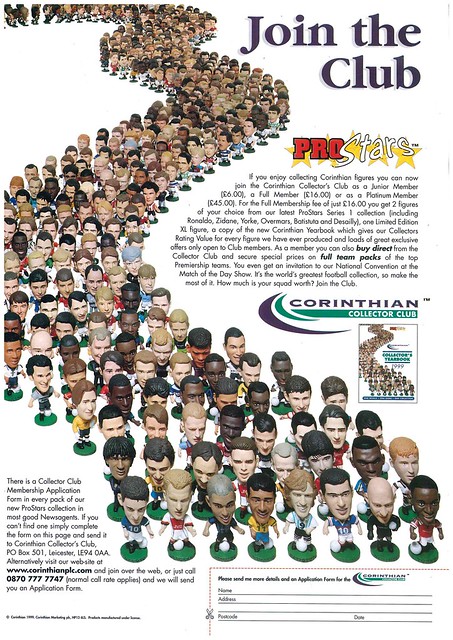 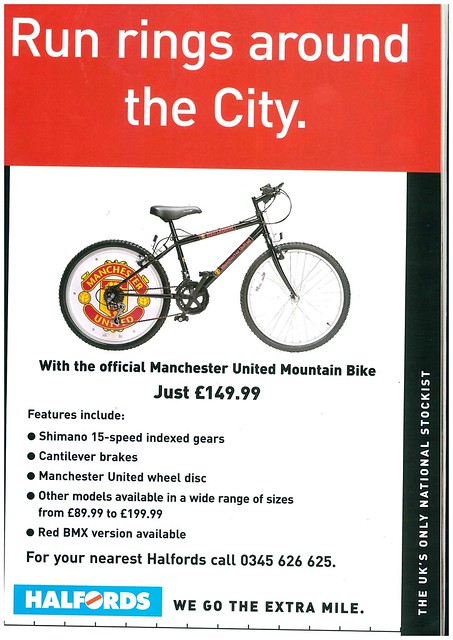 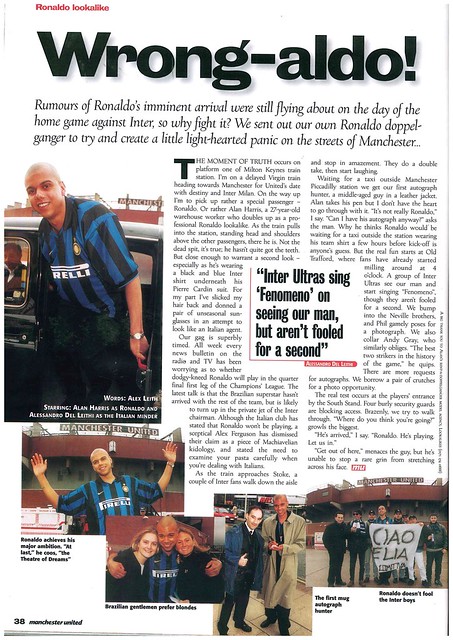 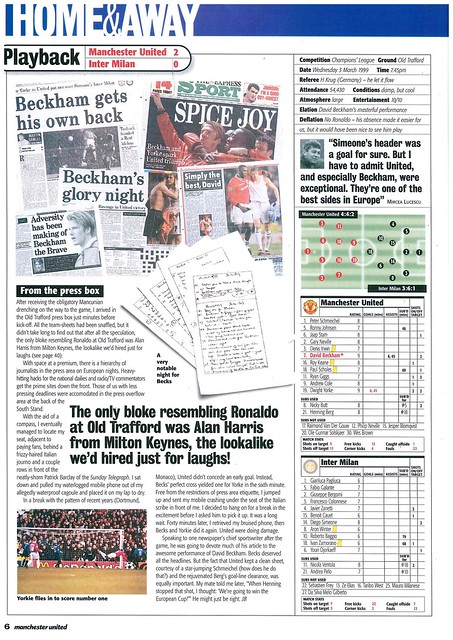 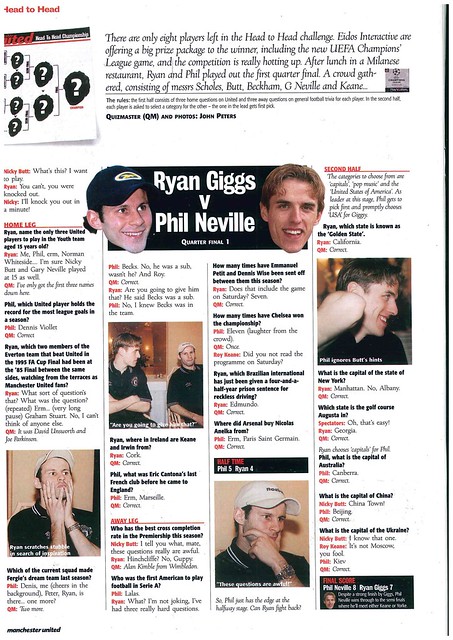