It’s Derby Day in Manchester, and this is reflected with Paul Walsh and Andrei Kanchelskis appearing on the cover of Shoot.

As you open the magazine, there is a poster of Liverpool’s Rob Jones, Steve Nicol and Julian Dicks.

United’s recent FA Cup Semi-final Replay win over Oldham gets a double page spread, with most of the focus being on Andrei Kanchelskis and his goal.

Having just made his England debut, Darren Anderton is already worried that he might not be able to add to his number of caps in future, if Tottenham Hotspur are unsuccessful in their battle against relegation.

Over the page, there is a poster of Neil Webb.

With the World Cup approaching, Shoot does a double page feature focusing on Nigeria’s chances, having qualified for the first time.

In 1994, Shoot had a columnist called Metro, who was the reigning Nintendo UK Champion. He reviewed video games. This week, he reviewed Ryan Giggs Champions World Class Soccer.

In adverts, there were adverts for World Cup Cards, made by a company called Uppper Deck.

Paul Gascoigne had recently suffered a serious and potentially career ending injury. Shoot dedicates a page to this, with a host of footballers offering messages of support to him.

In foreign news, Inter Milan want to offload Dennis Bergkamp and replace him with Chris Sutton, while AC Milan want to buy back Ruud Gullit, a year after selling him after they thought he was too old.

Arsenal’s win over Paris St Germain in the European Cup Winners Cup Semi-Final gets a double page spread. It was a bittersweet night for Arsenal, as Ian Wright would miss the final through suspension.

With the World Cup approaching, Shoot has a series previewing it, with a comic book style full page look at past tournaments. This week featured the 1950 tournament.

Rangers and Dundee United have won through to the Scottish Cup Final, and this gets a double page feature, with Rangers aiming to make history by becoming the first team to win back to back trebles.

The Manchester Derby gets previewed on the final pages, with an interview with City’s Michael Vonk. 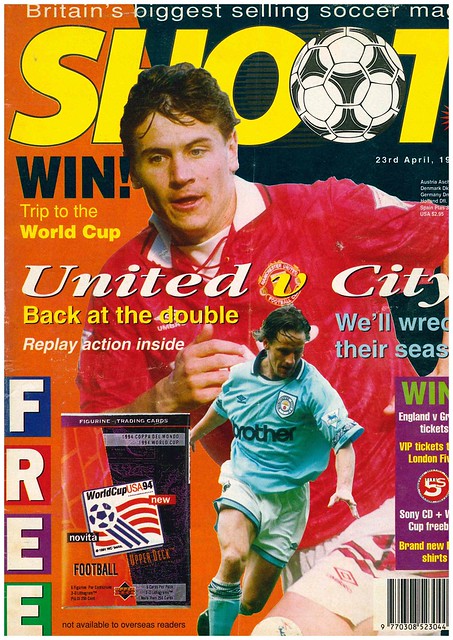 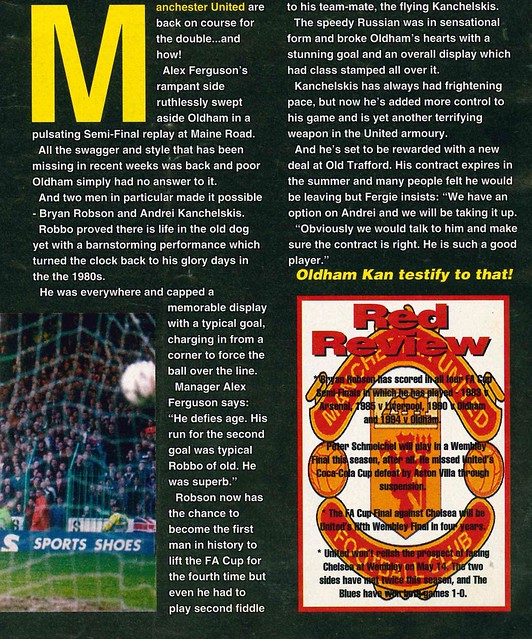 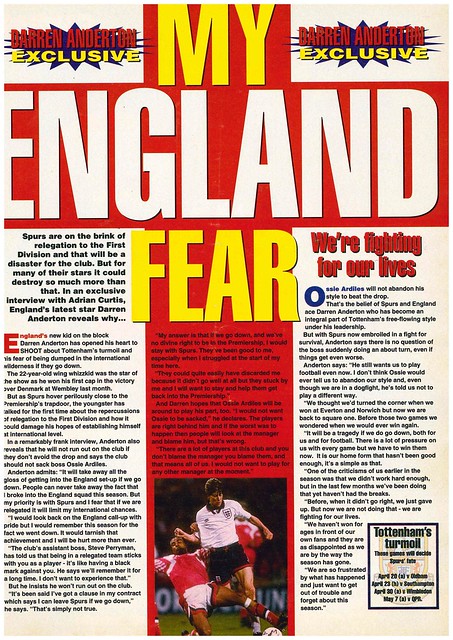 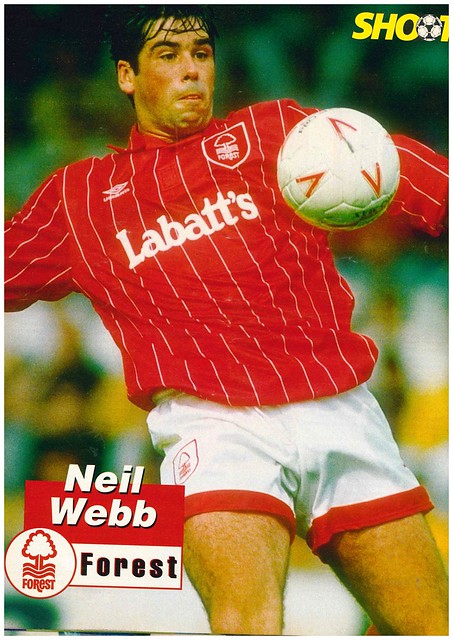 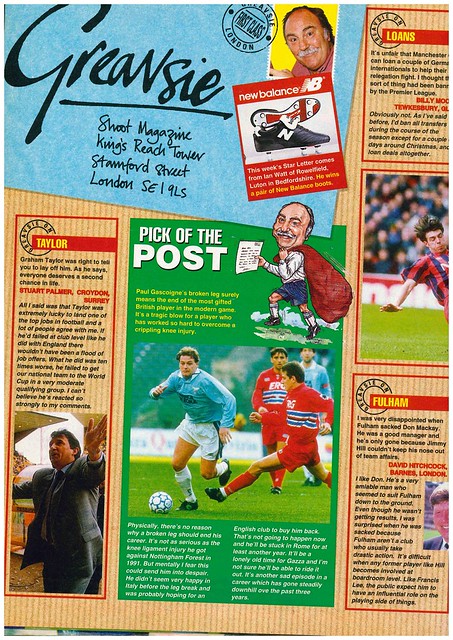 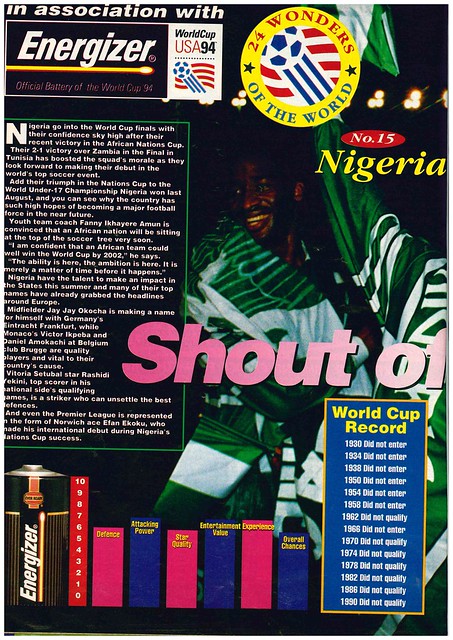 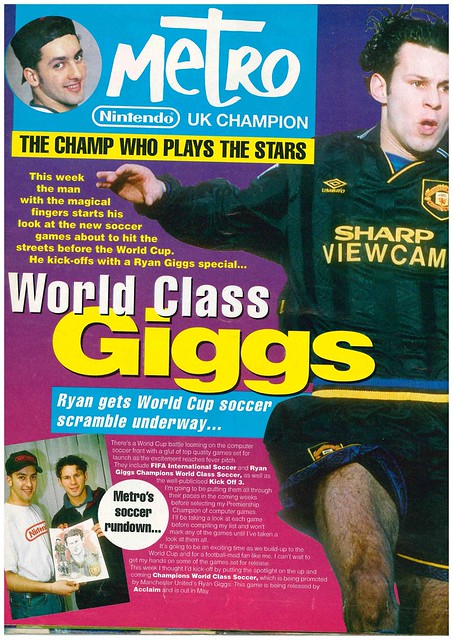 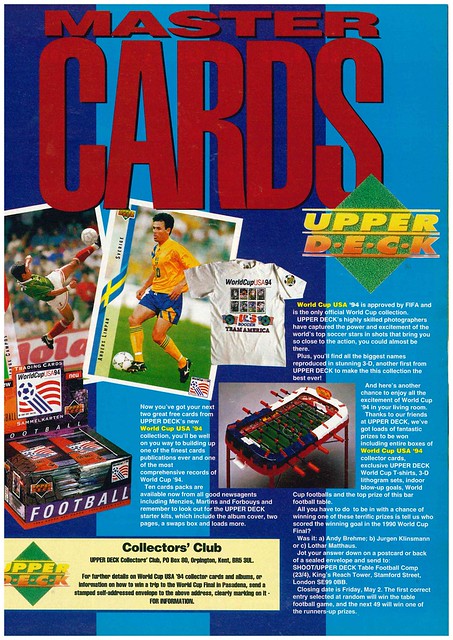 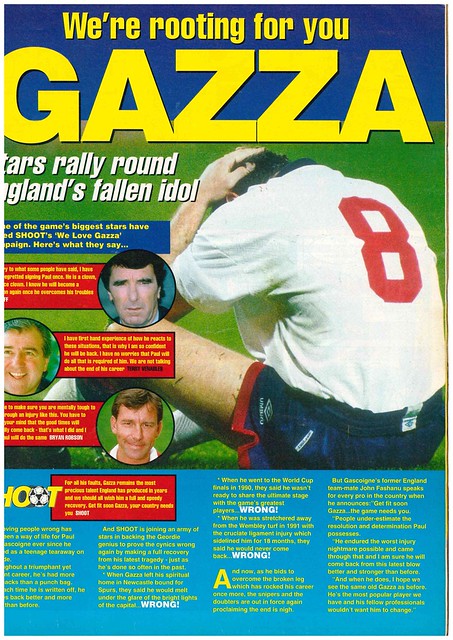 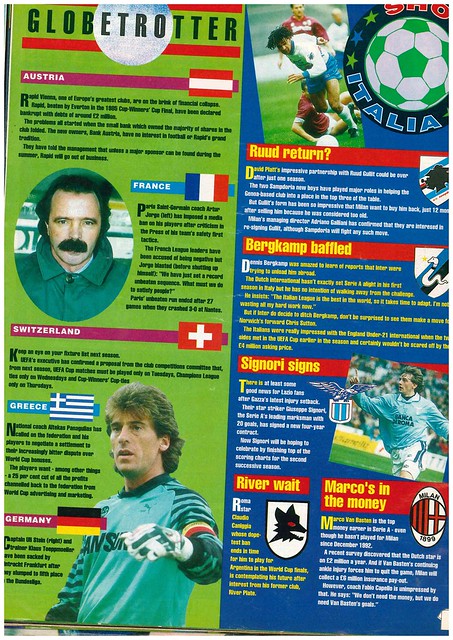 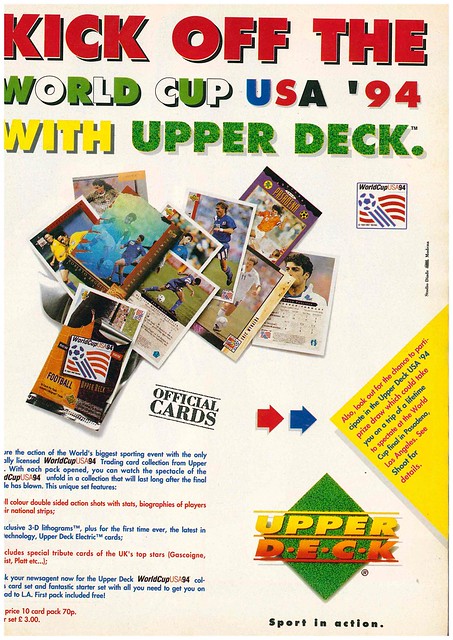 Jurgen Klinsmann is the cover star of this edition of Shoot, after making a goalscoring start to his career in England, denying claims that he’s past it.

In news, new Middlesbrough player/manager Bryan Robson has revealed that his lets his assistant Viv Anderson do half-time team-talks in matches that he is playing in.

In ads, there is an advert for a band called Oasis, as they have just released their debut album, Definitely Maybe. Meanwhile, Chris Sutton is advertising Patrick, having just made a British Record move to Blackburn Rovers.

England are playing USA in a friendly at Wembley, and this match gets a double page preview, focusing on Milwall goalkeeper Kasey Keller who is desperate to play in this game. 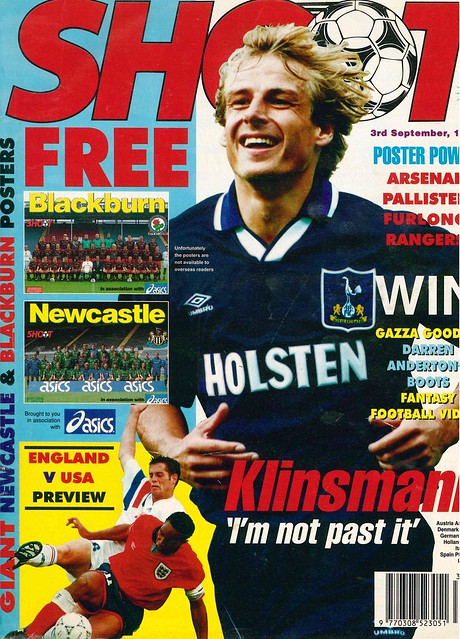 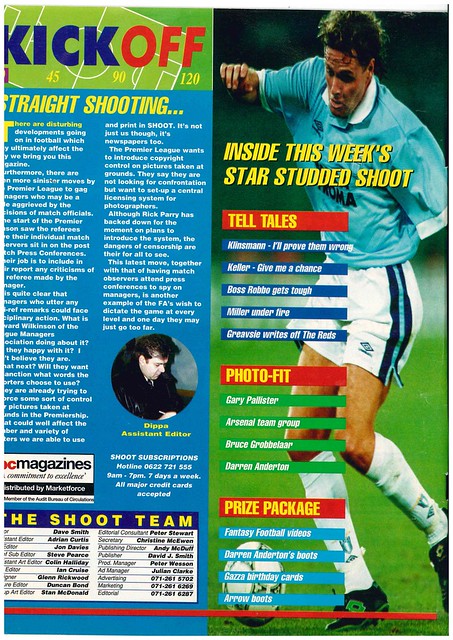 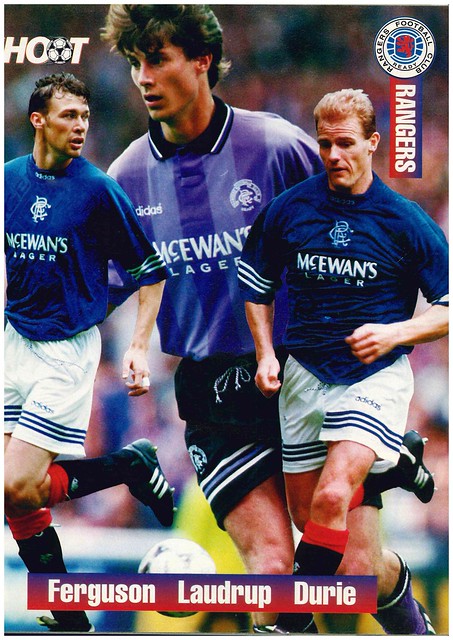 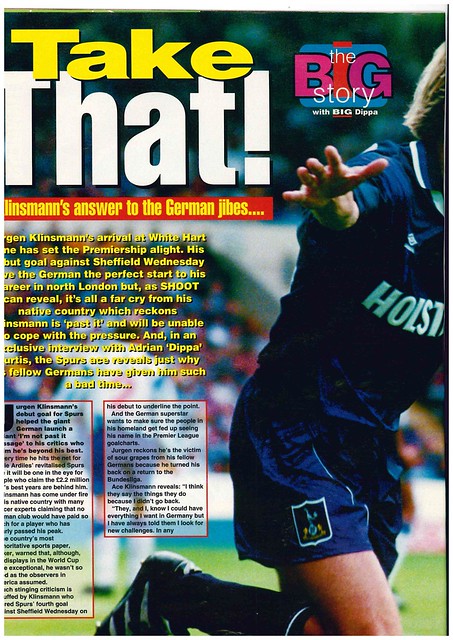 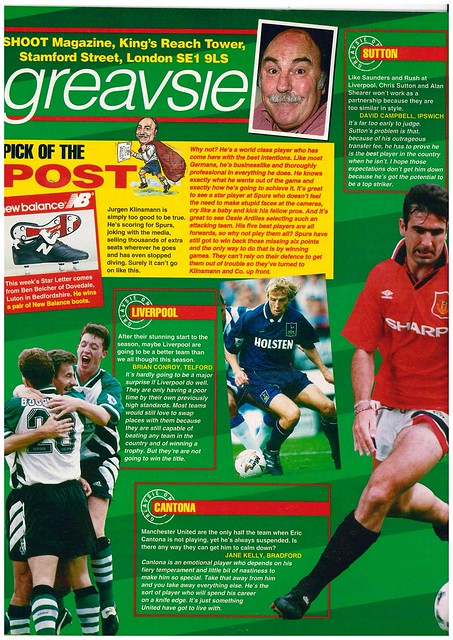 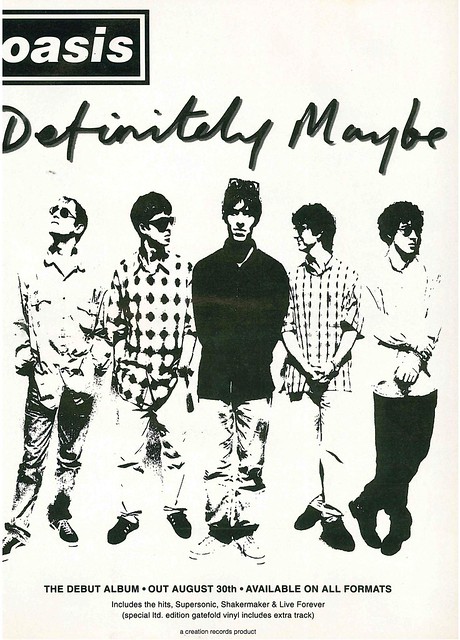 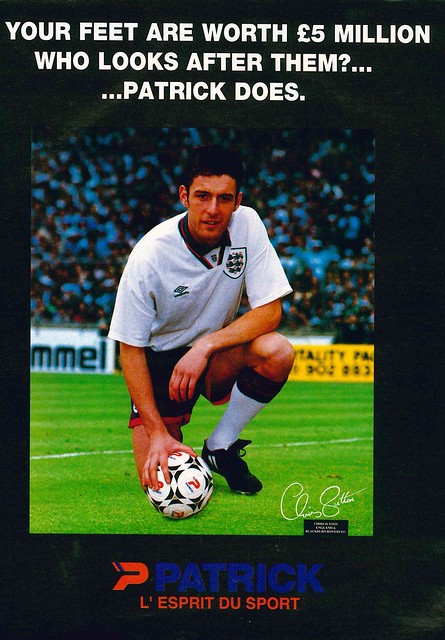 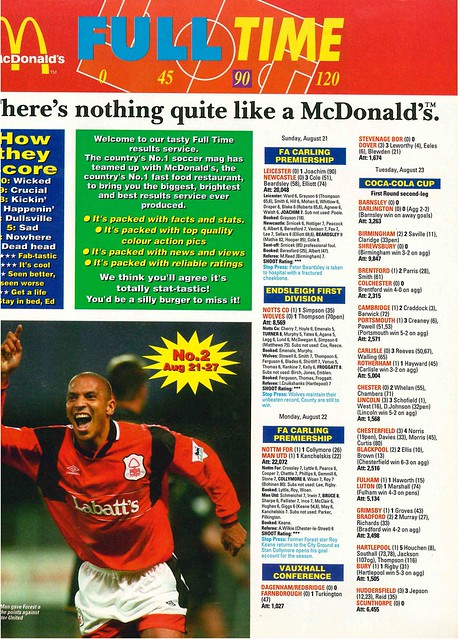 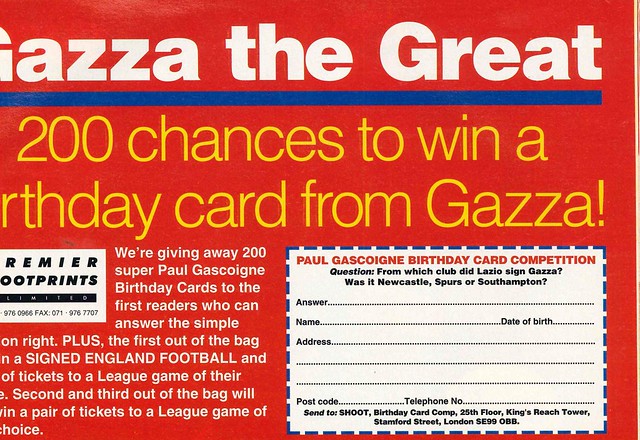 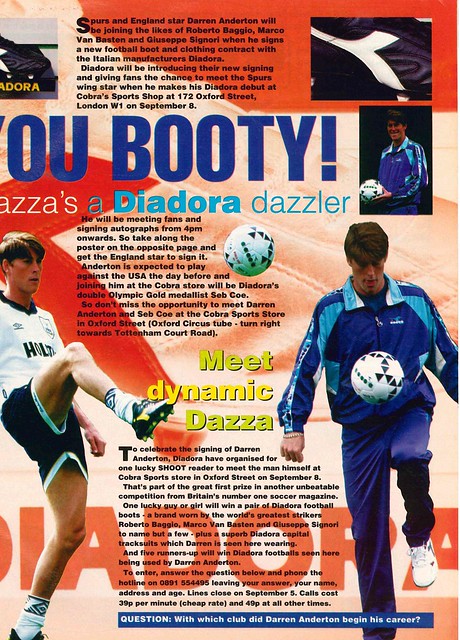 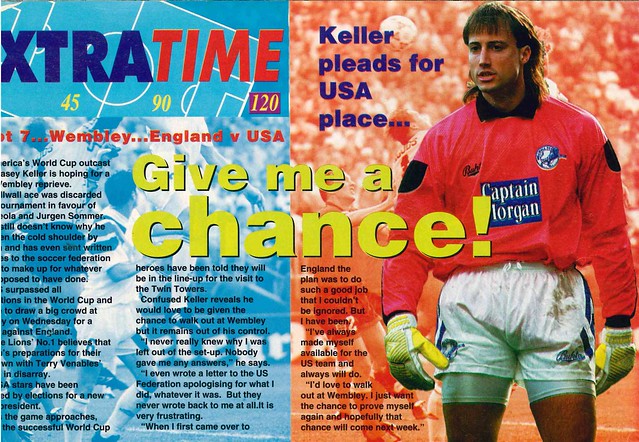 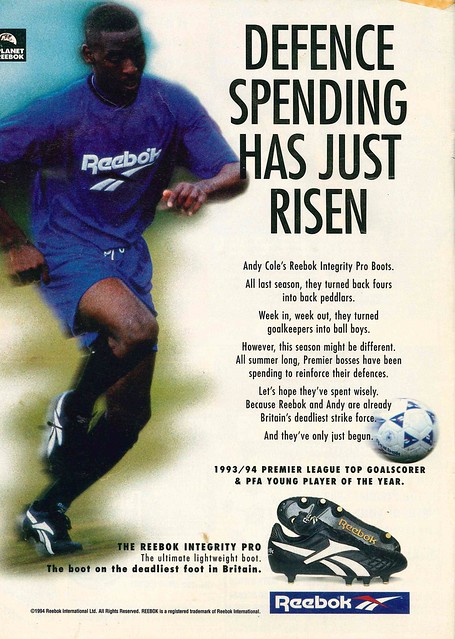 The last ever pre-season of the 20th century dawns, and Ryan Giggs is the cover star of Shoot, an edition where you can win signed England shirts.

In news, Andy Cole is launching a pop career with the release of his single ‘Outstanding‘, dubbed by Shoot (possibly sarcastically) as “Britain’s answer to Will Smith”

Also at United, they launched a new away kit in Central Manchester, while in rumours, Portsmouth were linked with a move for Georgi Kinkladze.

Jonathan Pearce is featured in a Q and A as Bristol City’s celebrity fan, who admits to having a Crystal Palace season ticket.

Ryan Giggs gets a four page interview, looking back at the past year (United won the treble, in case you didn’t know) and looking forward to the future.

When asked what else he can achieve, he points out that Juventus played in three successive European Cup Finals, though Giggs would go on to play in three out of four, a decade later.

When asked about his favourite position, he give the standard footballer answer of just being happy to be picked, adding “I’d play in goal as long as i’m playing for United”, commenting on how footballers have a much higher public profile since he made his United debut, and how he can’t see himself playing for another club.

George Boateng, having just joined Aston Villa, is interviewed on the move, stating that he wanted to join a bigger club to raise his profile so he could force his way into the Dutch squad for Euro 2000, being co-hosted by Holland.

Boateng did force his way into the Dutch squad, but not until 2001, only winning 4 caps.

John Beresford is interviewed in a Desert Island Discs style feature, except that it is about one item to take onto a Spaceship. He would take a Robbie Williams CD. He wasn’t fussy about which one, describing Williams as “A top singer”

He would also take a copy of “The Life Of Brian”, Milk and Chocolate, and invite Paul Whitehouse as his celeb guest.

Kevin Phillips gets a feature on his favourite game, which he chose as making his England debut in a friendly away to Hungary the previous season. Little did he know, he would go on to be the Premier League’s top scorer in the forthcoming season.

Chelsea’s new signing Chris Sutton makes an appearance at a football tournament sponsored by a chocolate bar to hand out prizes and sign autographs, giving advice to aspiring footballers, while adding that he believed Chelsea could win the league. Chelsea finished 5th that season.

Jermaine Pennant, Britain’s most expensive 15 year old gets a poster, where the bio says “Expect him to be hitting the sports pages for all the right reasons soon”, a reference to an FA investigation into agents payments in his move to Arsenal.

Shoot writers then make their season predictions. Of the ten featured, five correctly predicted Manchester United to win the League.

Adam McEwen predicts that Gianluca Vialli would be the first Premier League manager sacked. He was a season early.

Martin Keown is interviewed, giving the lowdown on his Arsenal team-mates. then poses for a photo as a spy. Agent Keown, reporting for duty.