As you open the magazine, there is a poster of Morrissey.

In competitions, you could win an Eddie Cochran single and a Levi’s T-shirt, or you could try to win an AC/DC satchel. Larry Mullan Jnr is interviewed, where he reveals people ask him to hold their umbrella for them while they got Bono’s autograph.

The American and Australian versions of Smash Hits had their Readers Polls, with the results being published. Duran Duran were popular in America, while Australian acts were unsurprisingly popular in Australia.

There is a profile of American star Taylor Dayne, riding high in the charts with Tell It To My Heart.

Kylie Minogue gets a poster an and interview, where she reveals she doesn’t like her teeth.

Debbie Gibson gets a double page interview, where she offers readers a guide to America.

In tours, you could see Pink Floyd, Robert Plant or Erasure if you wished.

Beastie Boys get a double page interview, where they say they want to start a Heavy Metal TV channel.

The Bangles get interviewed where Susanna reveals that her favourite music is Terence Trent D’Arby, Peter Gabriel and Rolling Stones.

Patsy Kensit reviews new singles, giving her favourite to Sting, and admitting to liking early Echo and the Bunnymen, but not knowing who The Doors were.

In concerts, Tiffany gets reviewed as she tours UK shopping centres.

The magazine ends with a double page interview with cover stars Bros. 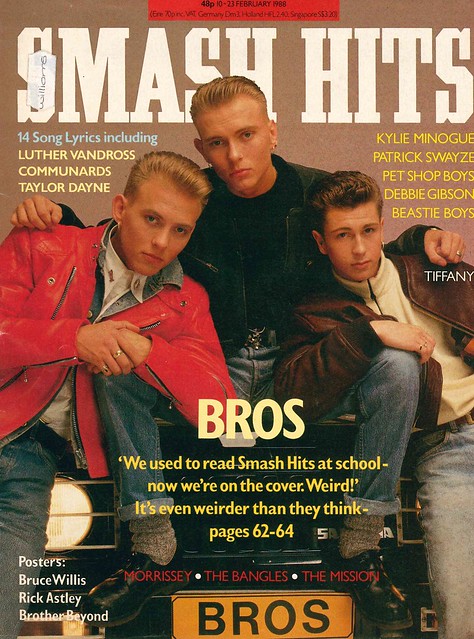 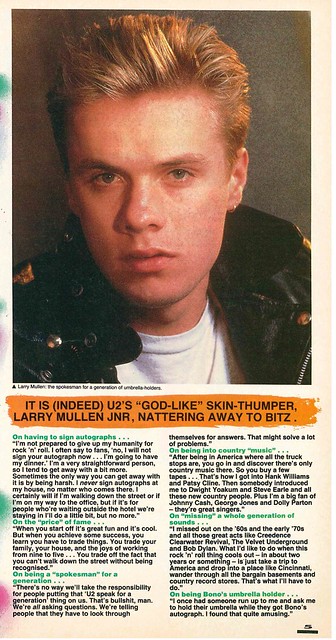 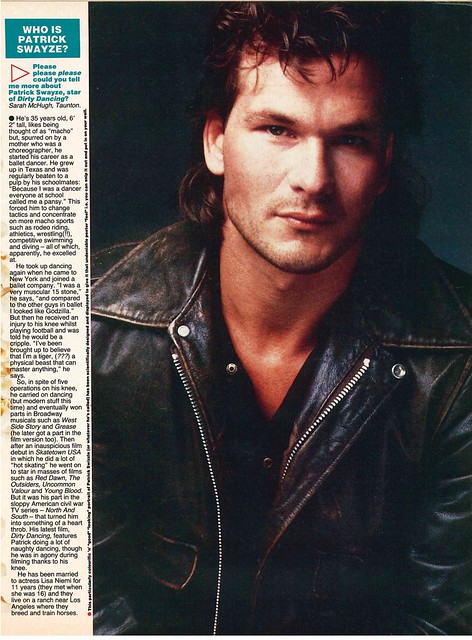 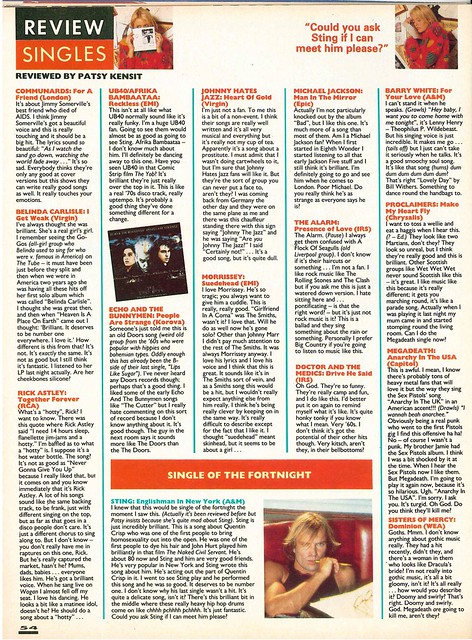 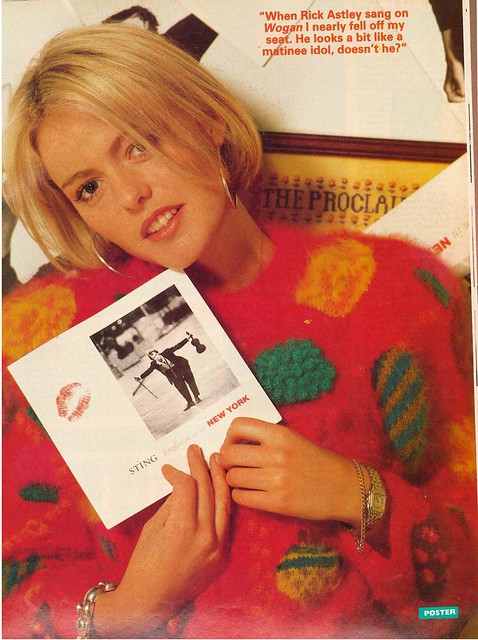 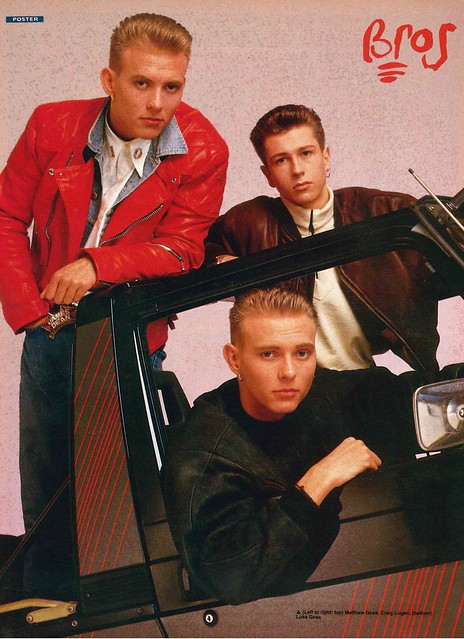 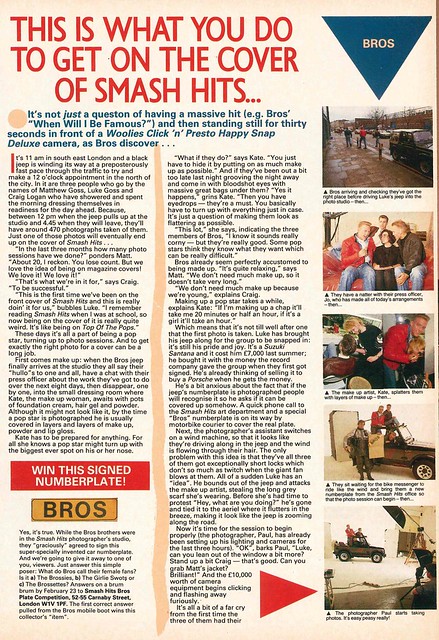 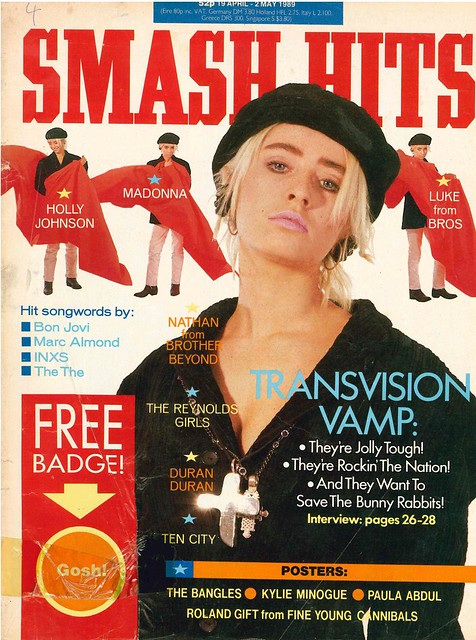 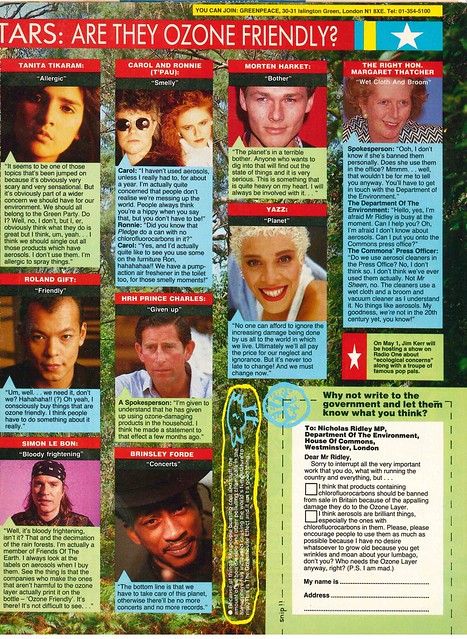 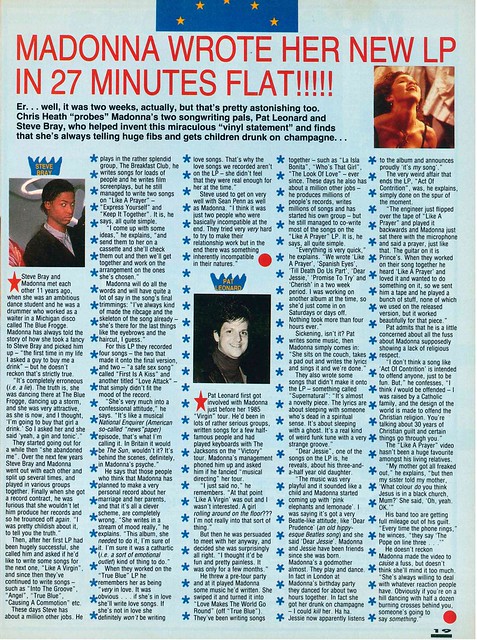 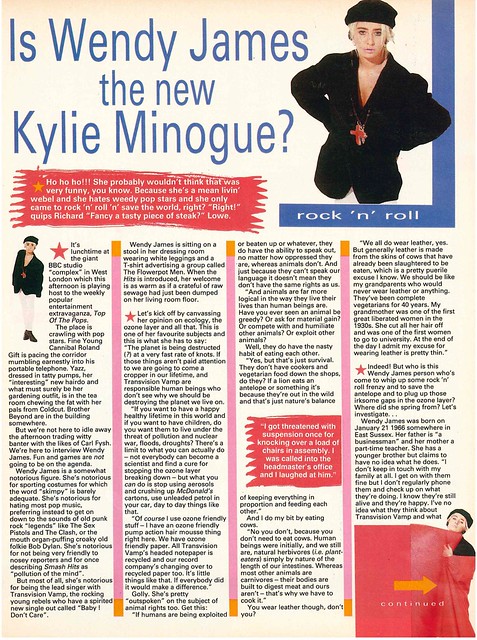 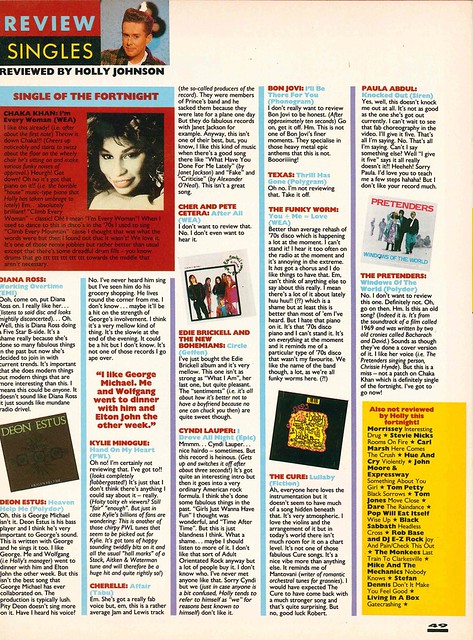 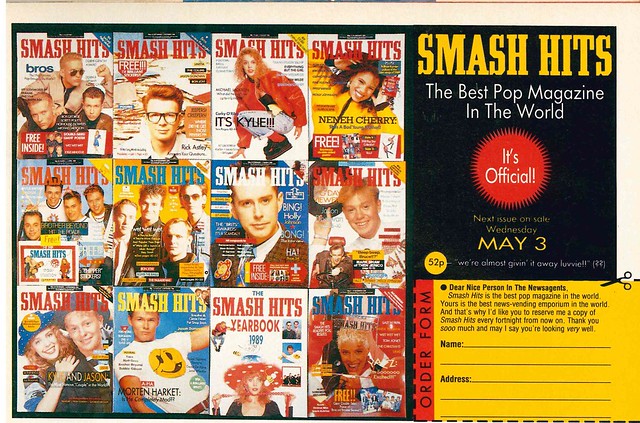 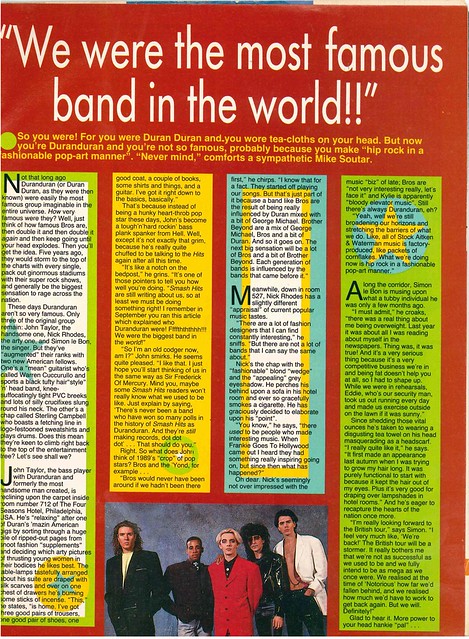 Today, is Duran Duran Appreciation Day. No idea what it is or why it is, but just go with the flow. Somewhere, Tony Hadley is furiously typing “And when is it Spandau Ballet Appreciation Day?” on his computer.

So, to celebrate, here’s a chart to get you in the mood. It really should be a Bank Holiday

This Thursday, is Madonna’s 60th Birthday. Nobody ever remembers it’s her birthday because it’s the anniversary of Elvis Presley’s death.

Here’s a chart for you if you’re celebrating her milestone birthday.

It’s a rest day in the World Cup, but don’t worry, you can survive this difficult 24 hours.

Women’s NIFL Cup Final is on the BBC Red Button, meanwhile, BBC Four will be making the licence fee a bargain tonight with a whole night dedicated to Duran Duran. Remember, it’s only a few weeks until Duran Duran Appreciation Day (August 10th)

And after all that, BBC Scotland will be broadcasting highlights of TRNSMT.

Decent night of TV viewing to make up for the lack of football.

Also, Canada Day and Independence Day coming up as well. Sounds like an excuse for a couple of themed charts.

1. Toto – Africa
2. Britney Spears – Boys
3. Dan Hartman – I Can Dream About You
4. Deep Blue Something – Breakfast At Tiffanys
5. Christina Aguilera – Keeps Getting better

This Monday, is St George’s Day. As with all Saints Days, this blog will do a chart. In fact two charts. Enjoy.

The new Duran Duran? asks Smash Hits of their cover stars The Power Station. You may recognise a few Duran Duran faces in the band.

As you open the magazine, there is a poster of Paul King, the lead singer of the band King.

Smash Hits has noticed a recent trend in recent weeks, of stars such as Andrew Ridgeley, Boy George, Steve Strange and Eurythmics all wearing tartan.

Pat Benatar is interviewed as she enters the final weeks of pregnancy.

In Reviews, new singles by Cliff Richard, The Smiths, The Stranglers, Mick Jagger and Kim Carnes are all reviewed.

Phil Collins is interviewed, where he reveals that John Taylor from Duran Duran is a fan of Genesis.

Cover stars The Power Station get a three page feature.

Wham! have recently toured Asia, and Smash Hits covers this with a two page photo feature.

Mick Jagger gets profiled as he gets set to release his debut solo album at the age of 44, lying in bed in a hotel room when Smash Hits came to visit.

Terry Hall gets interviewed as he launches his third band (after The Specials and Fun Boy Three) The Colourfield, with the headline OLD MISERY GUTS IS BACK. 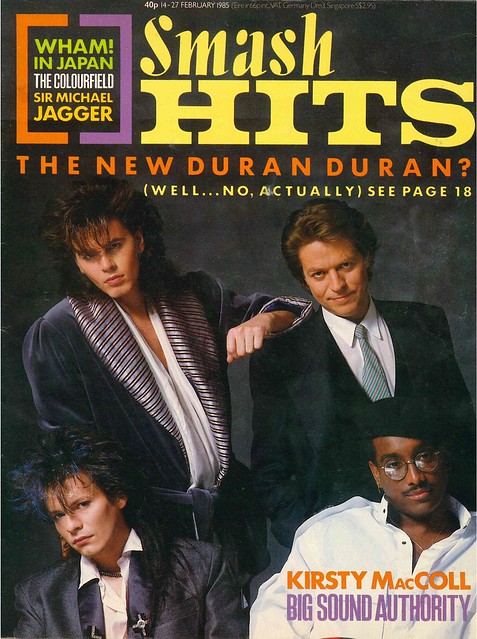 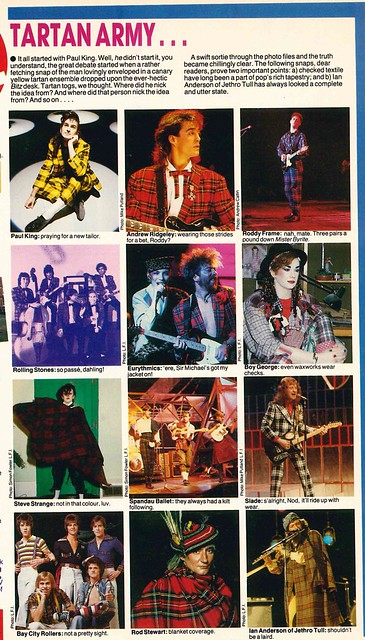 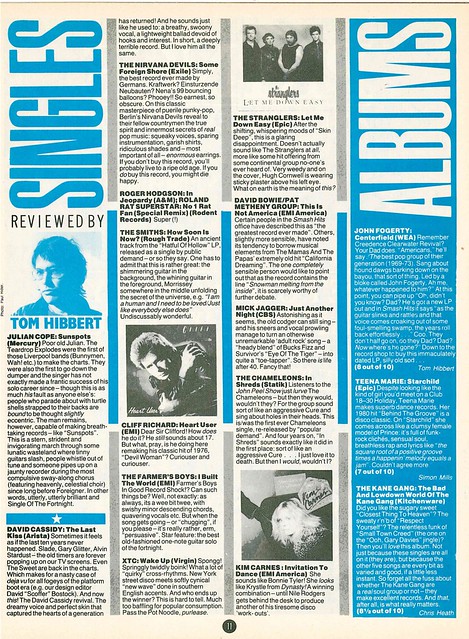 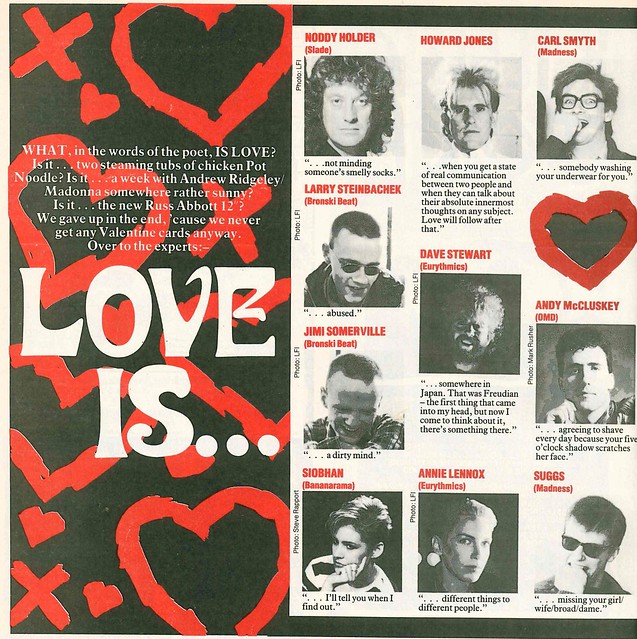 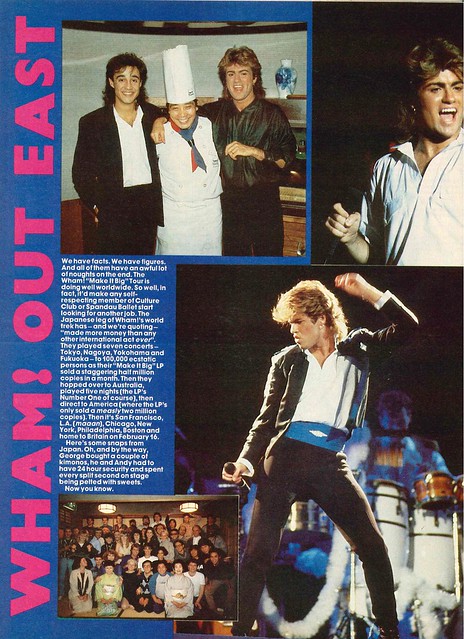 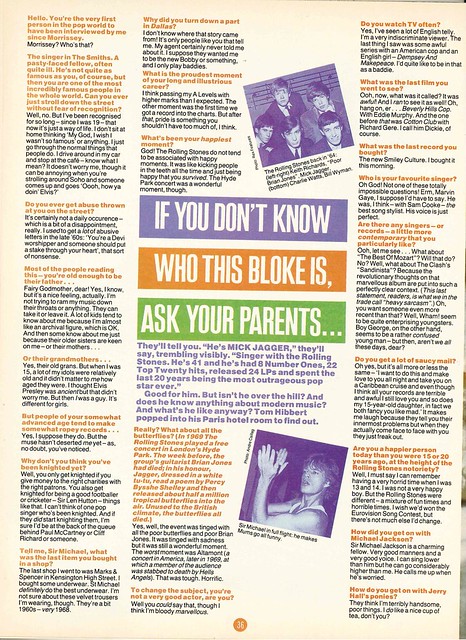 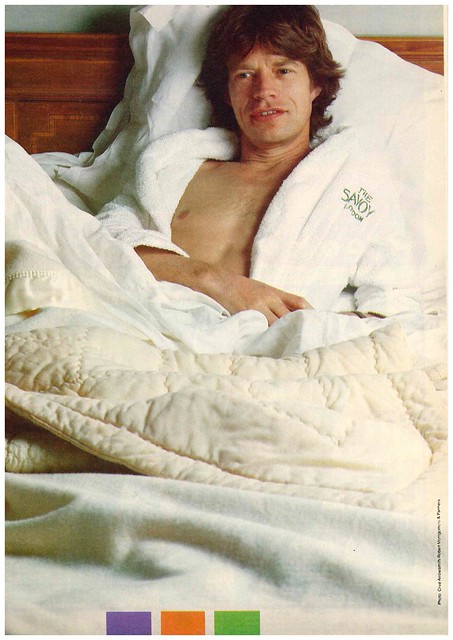 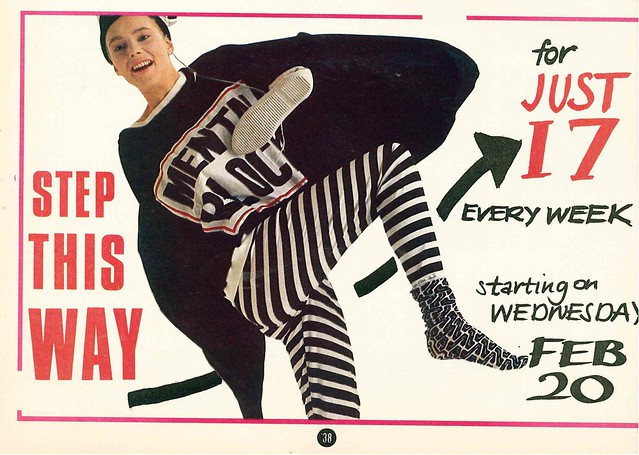 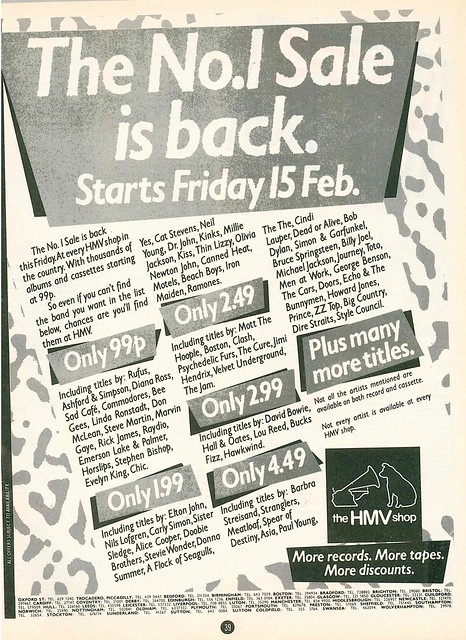 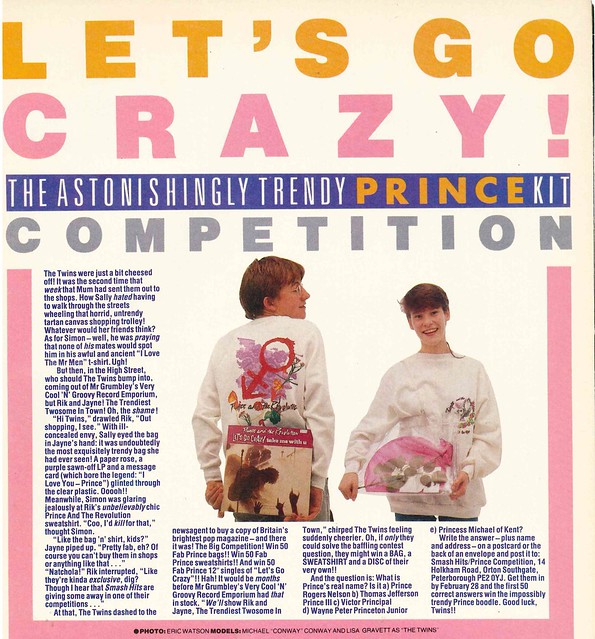 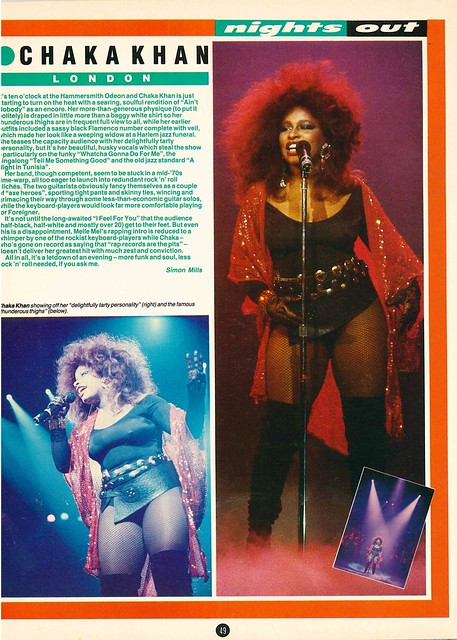 First of all, an apology for there being no Friday Five last week. I was busy and didn’t get a chance to do it. As a result, I missed out on celebrating International Twins Day, which was last weekend.

So here, is a chart based on musical twins

Yesterday was Duran Duran Appreciation Day. It should be a Public Holiday.

In gig news, Erasure have announced a tour for early 2018 with no Belfast gig. Boooo. I’m pining my hopes on Belfast Pride saving the day. Come on, be the heroes we need. DISCLAIMER – I have no inside information, i’m just letting my imagination run wild. What’s the point in having an imagination if you can’t let it run wild?

Liam Gallagher’s first solo show on Tuesday night sounded rather good. I know this, because it seemed like everyone was broadcasting it onto social media via their phone. A reminder that not all heroes wear capes.

I’m not saying I have a favourite Gallagher brother, but Noel does Belfast gigs when he goes on tour.

Hopefully, a full tour will follow when the album is released towards the end of the year.

Meanwhile, the Top Of The Pops juggernaut on BBC Four has reached 1984. The Story Of 1984 is on tonight at 9pm.

Today is Robert Smiths’s birthday, and it’s his favourite day of the week. It’s the first time it’s fallen on a Friday since 2006, and won’t happen again until 2023, so he had better enjoy it.

To celebrate, here’s a The Cure Top Five

This Sunday, is St George’s Day, so time to lie back and think of England with some themed playlists for you

Gig news, Paramore are coming to Belfast. The downside is, i’m already going to see The 1975 that night. If their marketing team had any brains, they could get them to do a gig at the bar of a South Belfast hotel and call it “PARAMORE AT THE PARADOR”

No doubt you all saw May’s big announcement on Tuesday morning. Brian that is, not Theresa. “Queen” are coming to The Odyssey in November. I’m not a big fan of him as a solo artist (apart from What Do You Want From Me?) but Adam Lambert is a capable vocalist and Queen + Adam Lambert looked decent at their BBC New Year’s Eve concert in 2014/2015. However, £74? For £74, i’m expecting Freddie Mercury and John Deacon on stage, and David Bowie to make a guest appearance on Under Pressure.

Ever since BBC Four had a night of programming dedicated to Depeche Mode, i’m been rediscovering how brilliant they are. There’ll be a Belfast gig this year, date to be announced, so I might pop along to see them.

Ryan Adams update. Still looking for a ticket for his Ulster Hall gig.