Nothing says Christmas quite like Charlie Nicholas holding a crown, and that’s what Shoot readers were treated to as they tucked into their turkey in 1985.

As you open the magazine, Ian Rush writes that he hopes 1986 will be a better year for him than 1985, and saying that Wales players failed Mike England in 1985, while also criticising the FAW for playing their vital World Cup qualifier against Scotland at Cardiff rather than Wrexham.

Shoot columnist Jimmy Greaves gets a double page interview, but it’s not football he’s discussing, it’s his predictions for other sports in 1986.

Cover star Charlie Nicholas writes that he is lacking in Christmas Spirit for the fixture computer as Arsenal face Liverpool and Manchester United over the festive period, with Nicholas pointing out that he has been on the losing side in his five games against United for Arsenal.

Another top flight player is pictured dressed as Santa. The clues are that he is 25, plays for a club in the North of England and has less than ten international caps. It is revealed later in the magazine that it is Gary Lineker.

In world news, Brazilian star Eder is linked with a move to Spurs, Gerard Houllier is praised for PSGs unbeaten start in France, and Holland have been offered lucrative friendlies in the summer of 1986 which will earn them more money than if they had reached Mexico.

In Uruguay, legendary manager Luis Cubilla has been jailed for attacking a referee who gave a penalty against his team.

Brian Clough is the subject of a “Focus On ….” feature, where he reveals his favourite musician is Frank Sinatra.

Shoot does a double page feature on transfers that almost happened, such as Jim Bett to Southampton, Bryan Robson to Everton and Charlie Nicholas to Manchester United.

Nicholas decided against signing for Untied after meeting Ron Atkinson, who he says talks about himself too much.

There is a double page spread featuring all the results in the qualifiers for the 1986 World Cup.

Shoot does a full page profile of Oxford United manager Maurice Evans, who has been given Robert Maxwell’s seal of approval after being predicted to be the first manager sacked at the start of the season.

Led by European Cup winner Peter Withe, Sheffield United get a feature and a team poster as they aim for promotion to the top flight.

Glenn Hoddle has been making the most of his spare time by spending it in the recording studio, where Shoot joined him, stating that he is determined to become good at Guitar. He would have a Top 20 hit in 1987 as part of Glenn and Chris, alongside Chris Waddle.

Peter Shilton gets a full page profile, with quotes of what other football personalities say about him. Bobby Robson describes him as the greatest goalkeeper of all time.

Alex Ferguson of Scotland and Aberdeen gets a double page profile looking at what makes him tick. He had recently turned down a move to Inter Milan.

John Bailey gets a profile, having left Everton for Newcastle. Bailey was seen as a joker at Goodison where he arranged for a Kissogram for manager Howard Kendall.

Bryan Robson’s column discusses United’s signing of John Sivebeak, having got glowing reports from Frank Stapleton and Kevin Moran, who faced him in a recent international.

Also writing about a new signing is Paul McStay, who is delighted that Mark McGee has signed for Celtic.

Manchester United’s explosive start to the season brought back memories of Leeds going 29 games unbeaten at the start of 1973-1974, and Leeds stars of that era share their memories.

West Ham’s forward duo of Tony Cottee and Frank McAvennie are profiled, where it is revealed that their partnership only came together due to injury.

Scotland fans got a double page photo collage from their side’s World Cup Play-Off win against Australia, with Graeme Souness being interviewed over the page, stating that it was Scotland’s best chance to get past the group stages for the first time.

Ian Greaves gets interviewed, having recently turned down the chance to manage West Brom in order to stay at Mansfield.

Chelsea and Manchester United are keeping an eye on Brian McClair, who has just handed in a transfer request at Celtic after being dropped to make way for Mark McGhee, while Colin Gibson hopes his recent move to Manchester United will get him a place in England’s World Cup squad.

Seamus McDonagh was £900 out of pocket when he played for Republic of Ireland in a recent match against Denmark, after flying in from America (where he plays his club football) at his own expense, and his match fee not covering it.

The magazine ends with a profile of Steve McMahon. His favourite singers are Rod Stewart and Bruce Springsteen. 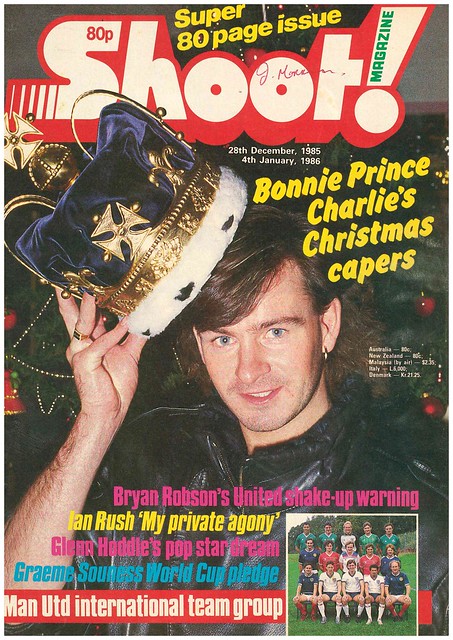 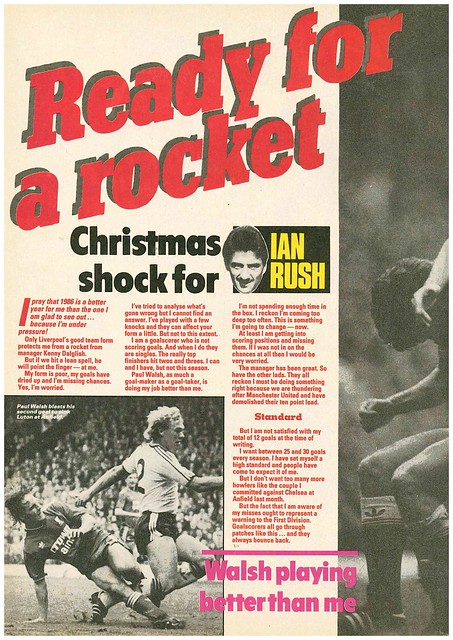 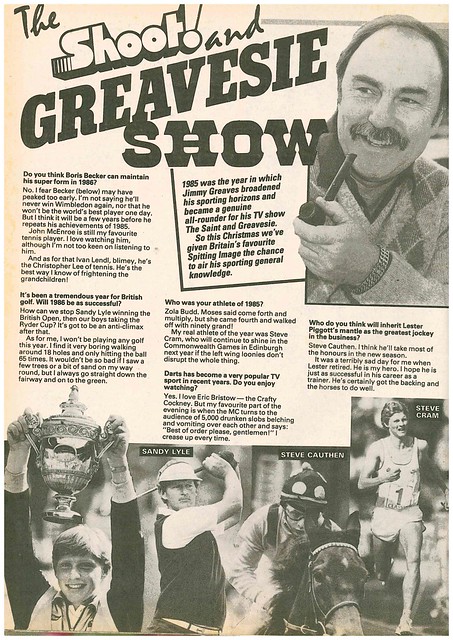 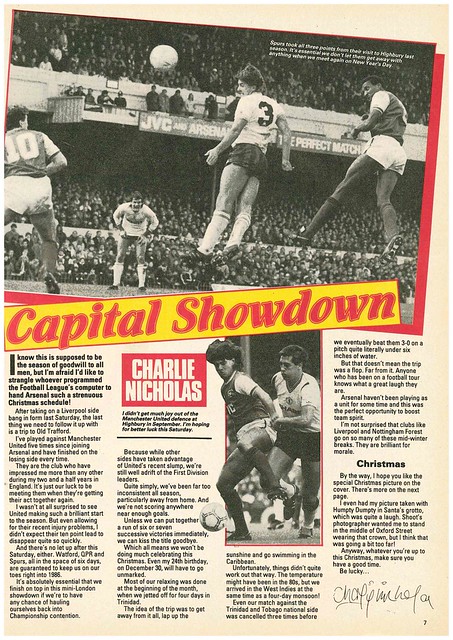 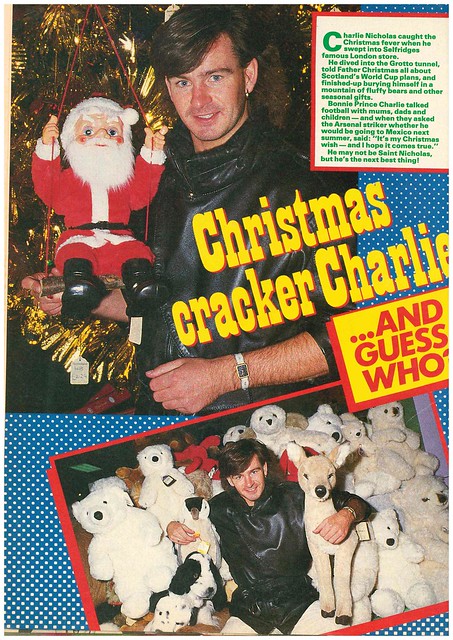 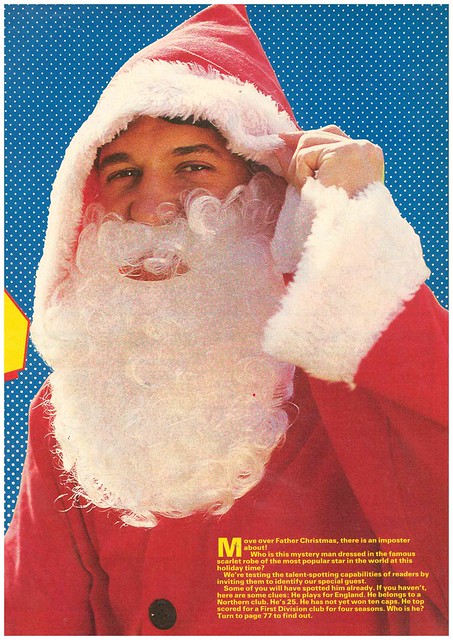 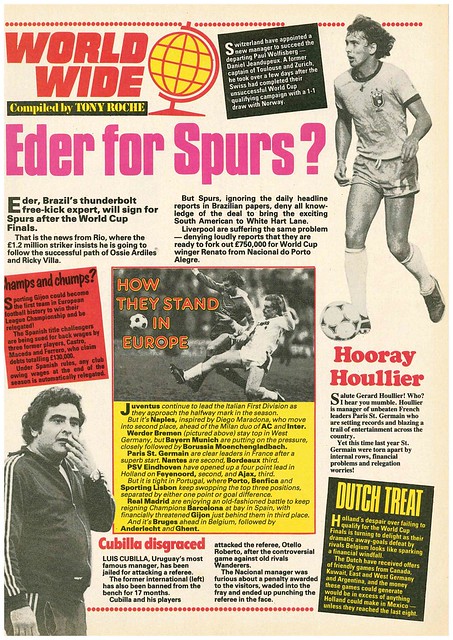 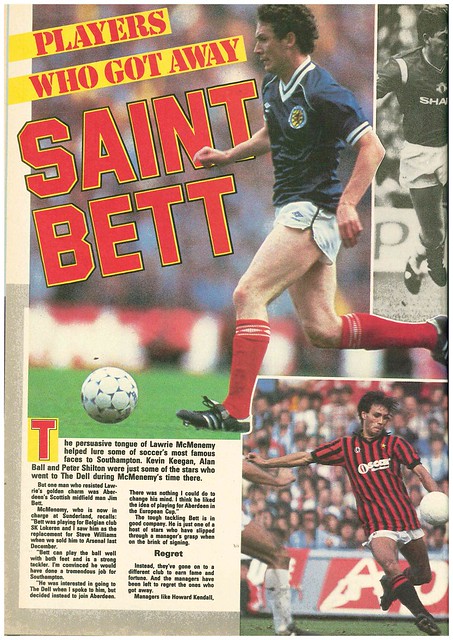 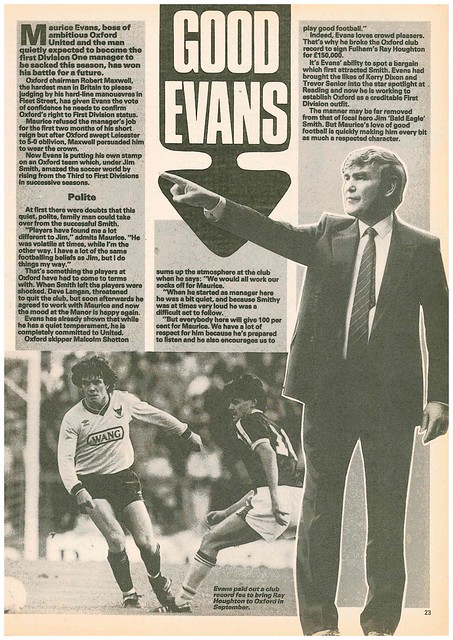 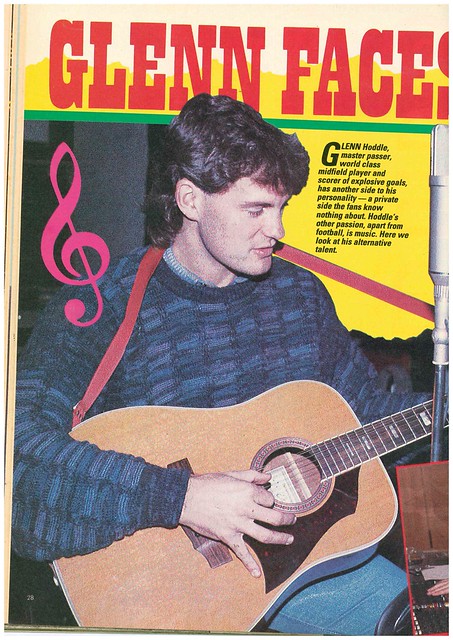 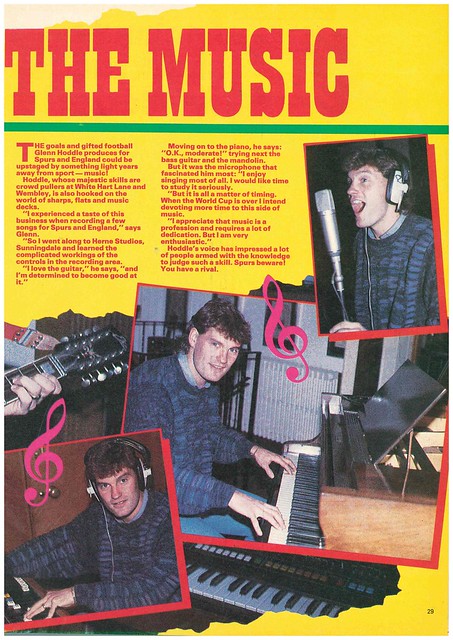 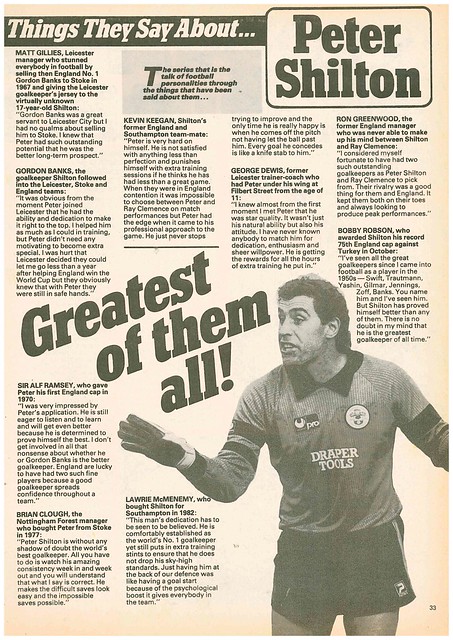 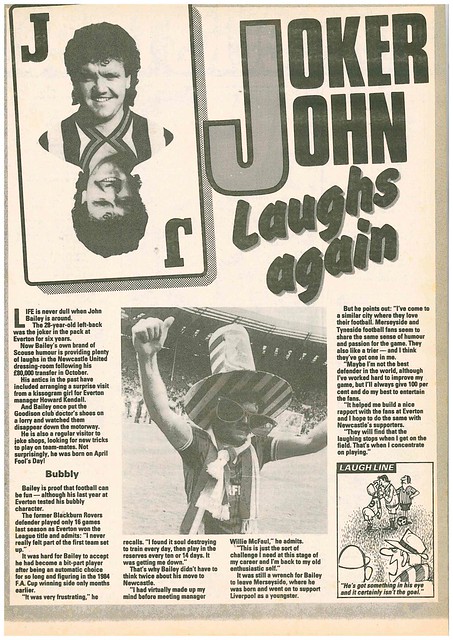 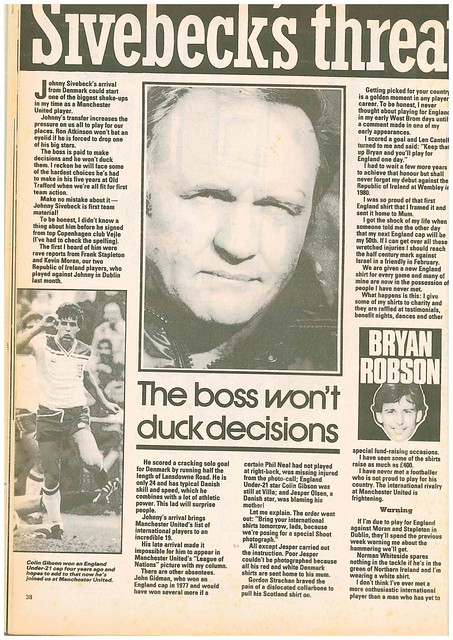 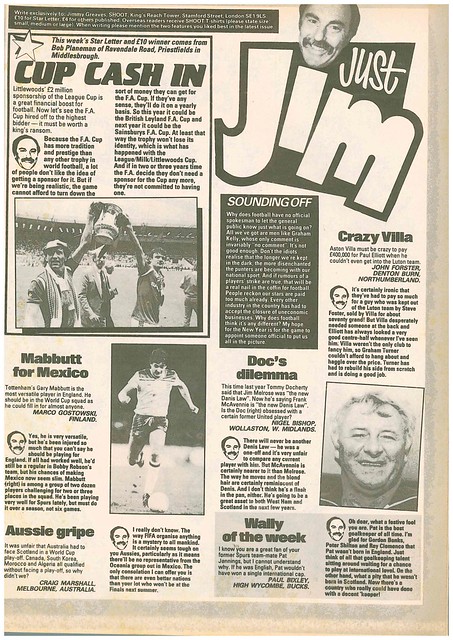 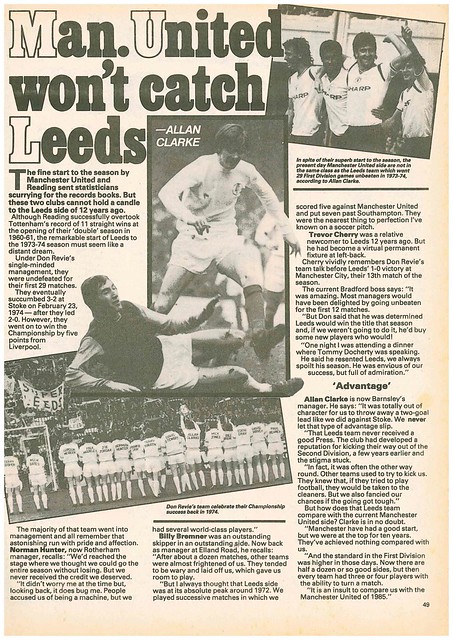 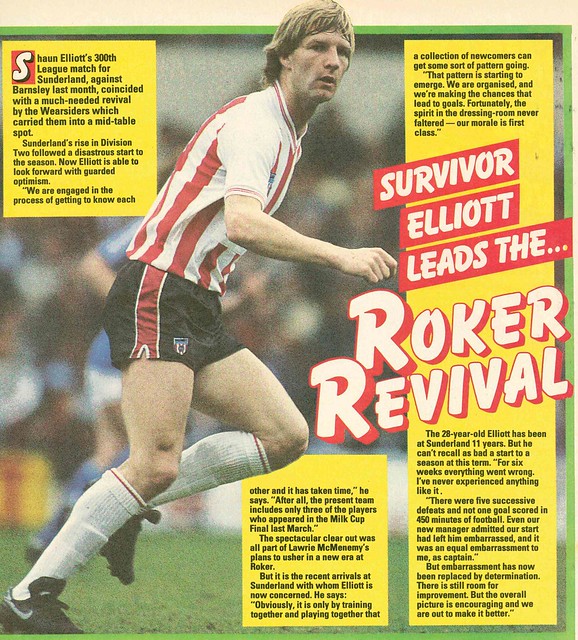 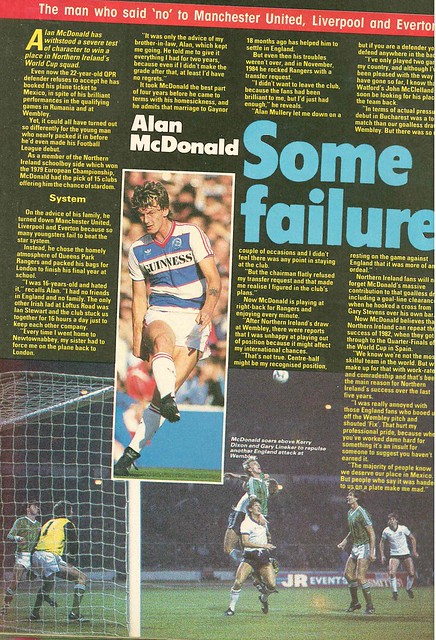 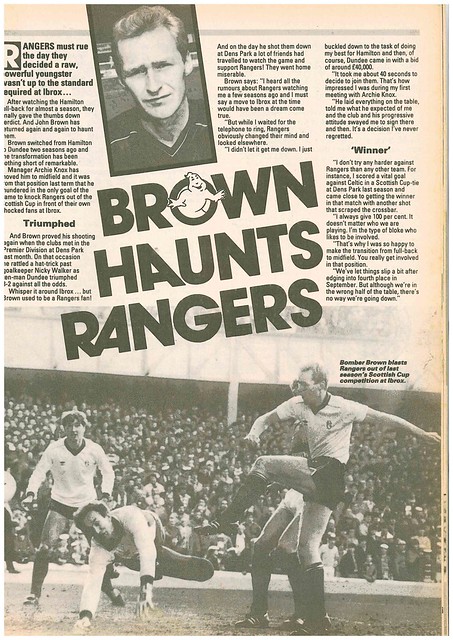 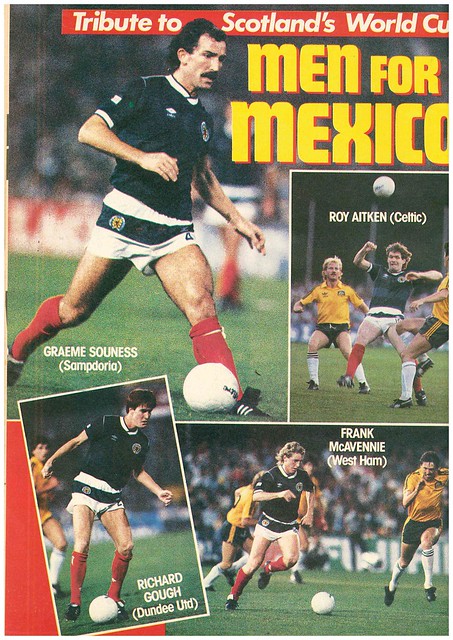 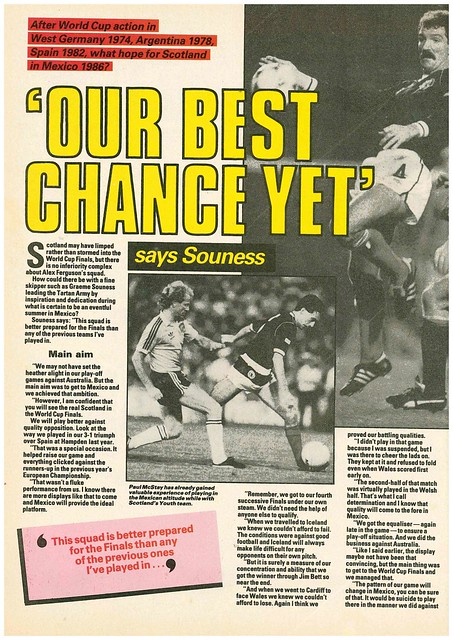 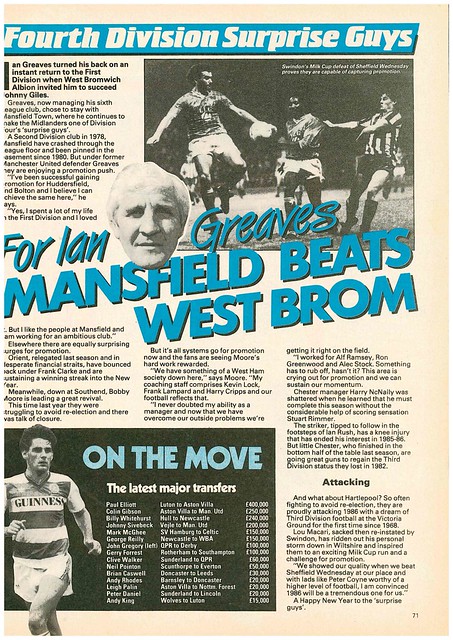 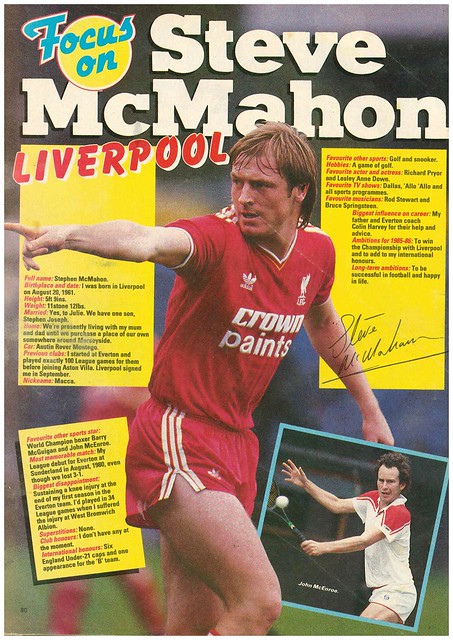