Over in Manchester for United’s match against Burnley, I was over for three days and had a spare evening on the Tuesday. So, time to get the fixture list out and see if I can take in a game. I had options.

One was Macclesfield Town, at home to Crewe, but not knowing how to get there or if I could back to Manchester after the match, that was ruled out.

Last year, I had a spare day and went to Sheffield, so Sheffield United were an option. However, due to check-in times (I’d want any match to be part of an overall day trip), any Tuesday match would have to be ruled out. Plus, i’d be on a train home full of Berts.

There was another Manchester v Sheffield encounter that night, with FC United (Northern Premier League) taking on Sheffield FC (Confusingly, now based in Derbyshire, who are in Northern Division One) in the Integro Cup, the League Cup for clubs in the Northern League, the 7th and 8th Tiers of English Football.

That would have been a good opportunity for me to actually see a match at Broadhurst Park. The last time I was there was in 2016 when I was over for a United game. I wasn’t allowed into the ground, as they were doing a pitch inspection just over an hour before kick-off, and then was given the news that the match was postponed.

However, it was this game that stood out, a cup Quarter-Final with a place at Wembley tantalisingly close.

For those who don’t know, this match was in the Football League Trophy. It is a trophy for clubs in the 3rd and 4th Tiers of English football, to give them a chance of a trip to Wembley and a trophy.

It is interesting to note that some of the bigger clubs who have fallen into this level such as Leicester City, Manchester City, Sheffield Wednesday, Sheffield United, Nottingham Forest and Leeds United have all failed to win the competition.

Recent years have seen a controversial revamp of the competition where underage sides of Premier League clubs have been allowed to enter, although not successfully, as the only one remaining of the eight Quarter-Finalists was Leicester City.

Anyone with even the most basic of interest in football will know all about the recent success of Salford City, climbing up the Leagues thanks to investment from The Class Of 92 (If you don’t know, that’s the collective name for David Beckham, Nicky Butt, Ryan Giggs, Gary Neville, Phil Neville and Paul Scholes)

The club’s profile has been boosted by being the subject of various TV documentaries.

One ambition was realised last year when they won the National League Play-Offs at Wembley to reach the Football League for the first time.

They remained in League Two until gaining promotion to League One in 2018, meaning they were favourites for this game as the higher ranked sides.

This was Salford’s first season in Football League competitions. Their League Cup campaign fell at the first hurdle with a defeat to Leeds United. They were now two wins from Wembley in their first attempt at winning the Football League Trophy.

I was going to this match as a neutral and didn’t care who won, just as long as there was a winner in 90 minutes, so that I wouldn’t have to negotiate late night bus schedules to Manchester City Centre.

Renovated in recent years, Moor Lane is named after the street it is located on, it is hard to miss as you walk towards it, big bright floodlights in the shape of the club’s badge, with red neon lights around it.

The street by which I entered the ground? Nevile Street. I didn’t bother to check to see if there was a Bott Street, Scholls Stree, Goggs Street or Buckham Street.

As with any ground I visit on my travels, I like to have a nosey around the club shop. There are plenty of programmes from home and away games this season if that’s your things. I did give the idea of buying a tracksuit top a miss as they look a bit Crusadersey.

We even had a guest PA Announcer for this game, with Accrington Stanley supporter David Lloyd doing the announcements for the away team, although he fluffed a couple of players names. I think he’ll be sticking to Cricket from now on.

Accrington took an early lead when Sam Finlay got spaced outside the box and his long range shot was deflected up and agonisingly over the keeper and.

Not only did they stay in the game, they began to prosper themselves, and got rewarded with an equaliser from the last touch of the half, when Cameron Burgess backheaded into the net in front of a sizeable away support to make it 1-1.

Within a few minutes of the second-half, Salford took the lead when Luke Armstrong won possession ahead of a hesitant Stanley defender and set up Tom Elliott to fire home.

As Stanley looked for an equaliser, we were treated to their keeper channelling Jose Luis Chilavert by trying to score from a free-kick, but the ball went wide.

In truth, Salford were comfortably holding on, while Stanley were getting frustrated.

In injury time, one of Stanley’s started arguing with Stewards when the ball went out of play, eventually running into the crowd behind the goal to retrieve it, prompting one Salford supporter to comment “Oi, leave it out dickhead”.

The match finished 2-1 to Salford, who are now one win away from a trip to Wembley in their first ever season in the Football League. To do so, they’ll have to get past the winners of the match between Newport County and Leicester City Under 23s.

Not long to go now until kick-off at Wembley. Back in 1990, Manchester United and Crystal Palace drew 3-3, meaning a replay was required to decide who won the cup.

That won’t happen today, as it has to be played to a finish

Printing deadlines meant Shoot could only cover the original game in this edition.

That match at Wembley got four pages of coverage, with a lot going to wether Ian Wright, who came off the bench to score twice, would be picked in the replay.

Luton Town’s great escape against relegation gets covered with an interview with Kingsley Black, who announces he wants to stay at Luton despite interest from Nottingham Forest and Liverpool.

Shoot previews the European Cup Final, which Ruud Gullit is desperate to play in after a season blighted by injuries.

He did play in a match which finished 1-0 to AC Milan, just as predicted by Shoot.

With the World Cup coming up, Scotland face Poland in a friendly, with Shoot interviewing Stuart McCall, as he reflected on the moment he almost made a substitute appearance for England in an Under 21 international.

Leeds United are promoted back to the top flight of English football after an eight year absence, but Shoot says they should be kicked out of football altogether after crowd trouble at their final game at Bournemouth.

Ian Rush uses his column to pay tribute to Liverpool manager Kenny Dalglish, who has just retired as a player, making a final appearance in the game against Derby.

There is a double page interview with Niall Quinn, who recently left Arsenal for Manchester City in a bid to get first-team football to ensure his place in the Republic of Ireland’s World Cup squad.

In foreign news, Diego Maradona intends to stay at Napoli in an attempt to win the European Cup.

In ads, there was an advert for Esso’s World Cup coins of the England and Scotland teams.

Previews of the forthcoming World Cup continue with United Arab Emirates, a squad who is very much disunited due to rows over money.

Dundee’s relegation from Scotland’s top flight was covered with an interview with Billy Dodds, who says he intends to stay at Dens Park.

There is another Wembley Cup Final this week, with Third Division champions Bristol Rovers taking on Tranmere Rovers in the Leyland Daf Cup Final.

Rovers were currently exiled at Twerton Park in Bath, with defender Geoff Twentyman saying the club will be the poor relations in the city until they get a new ground. 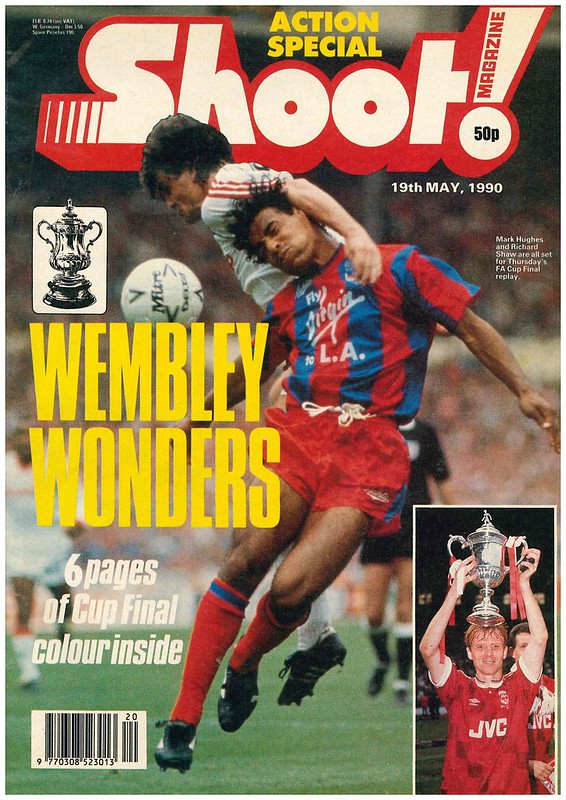 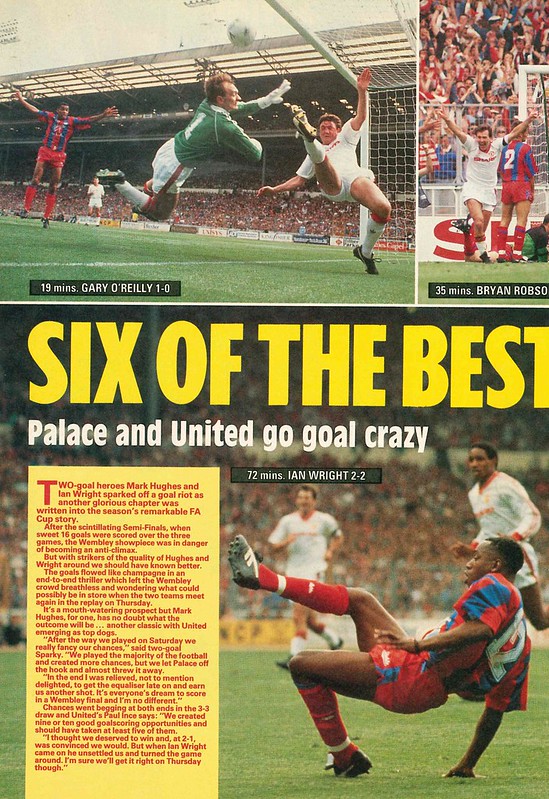 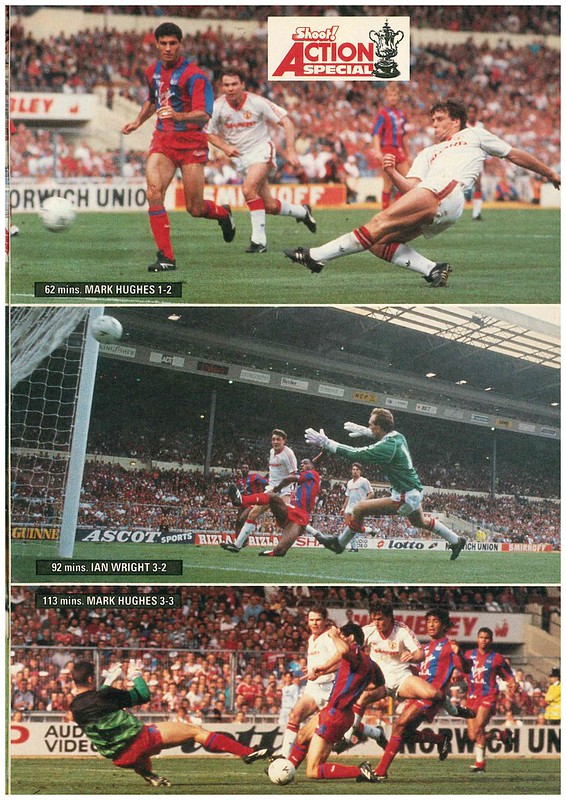 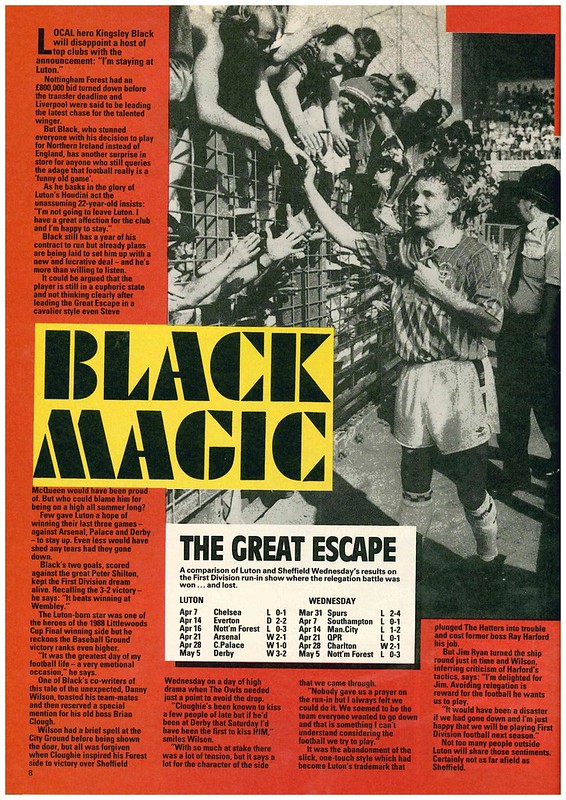 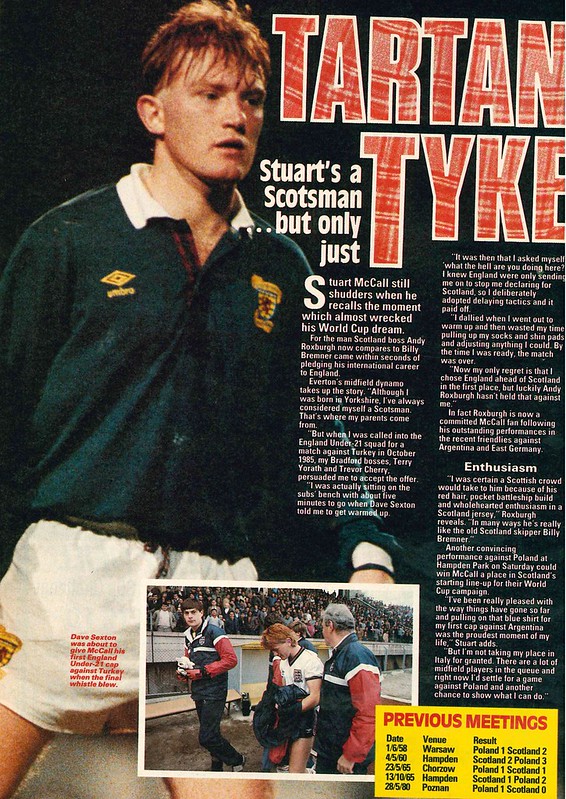 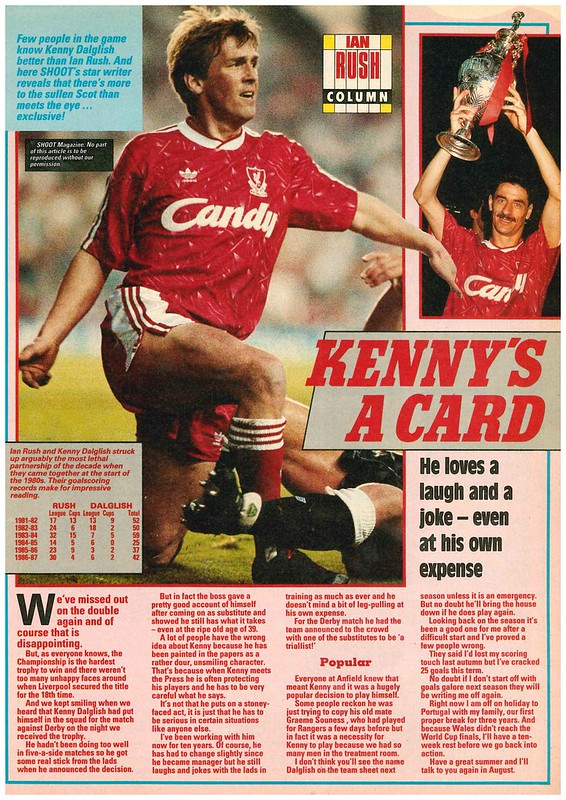 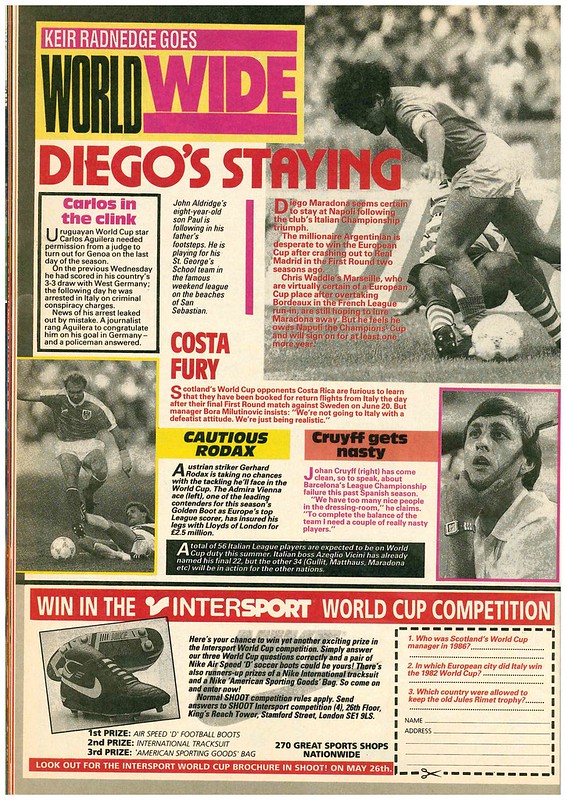 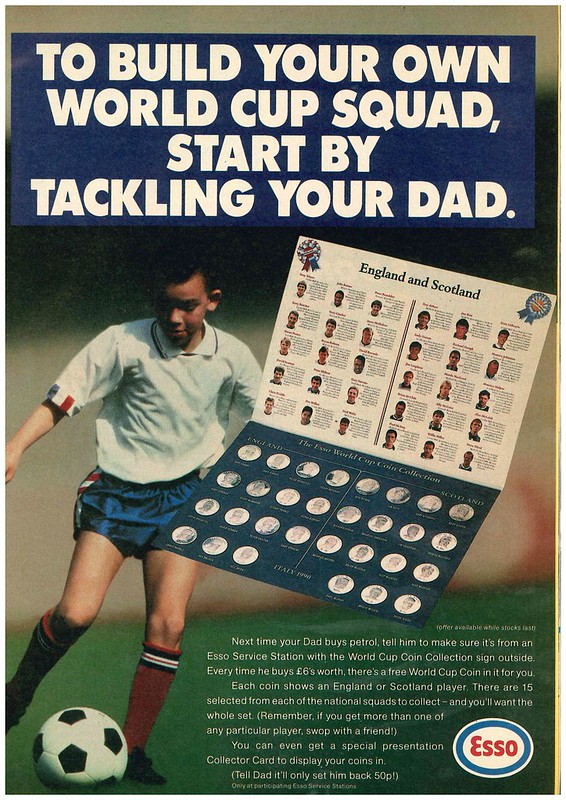 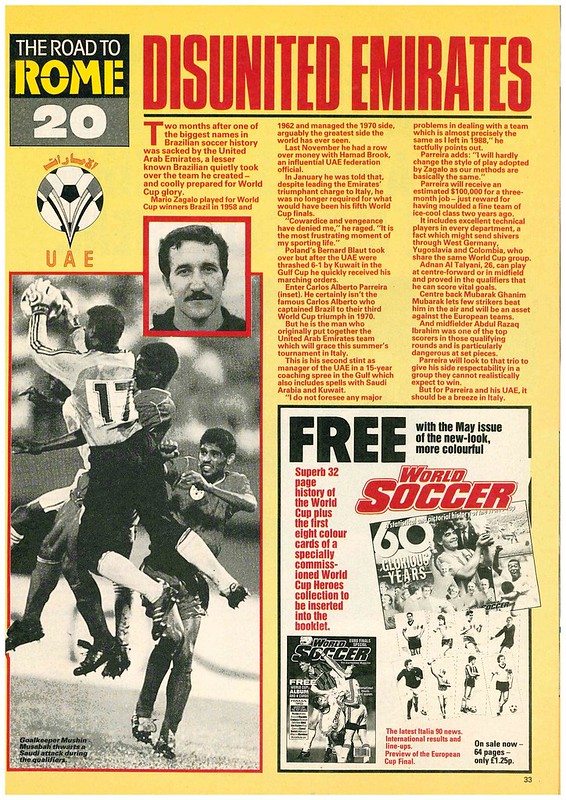 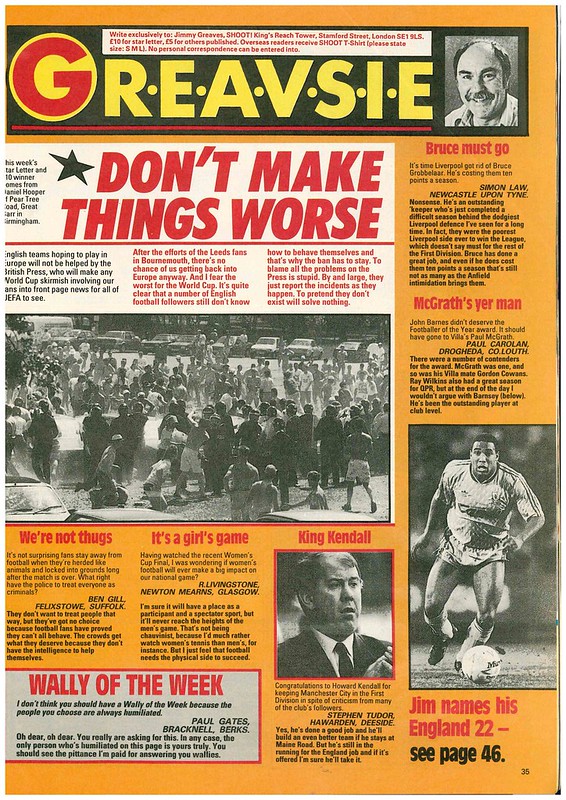 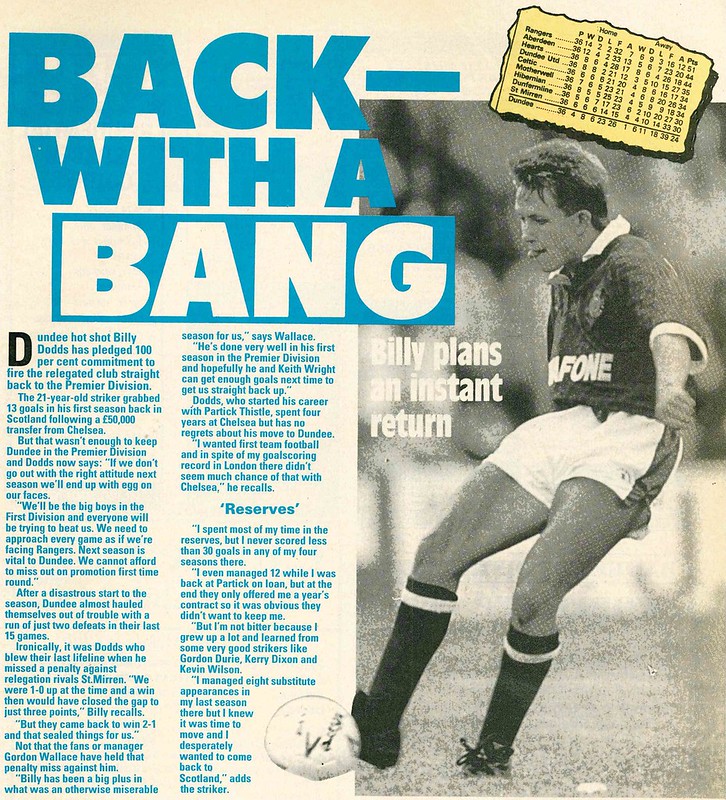 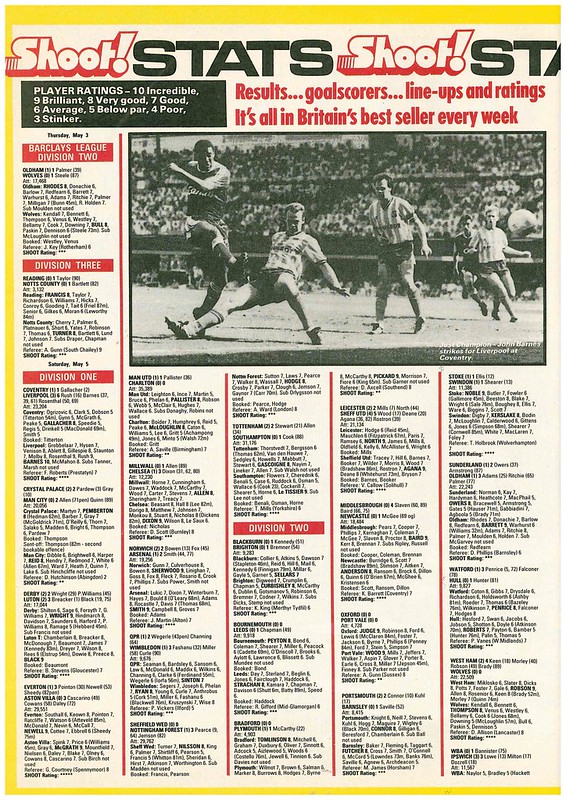 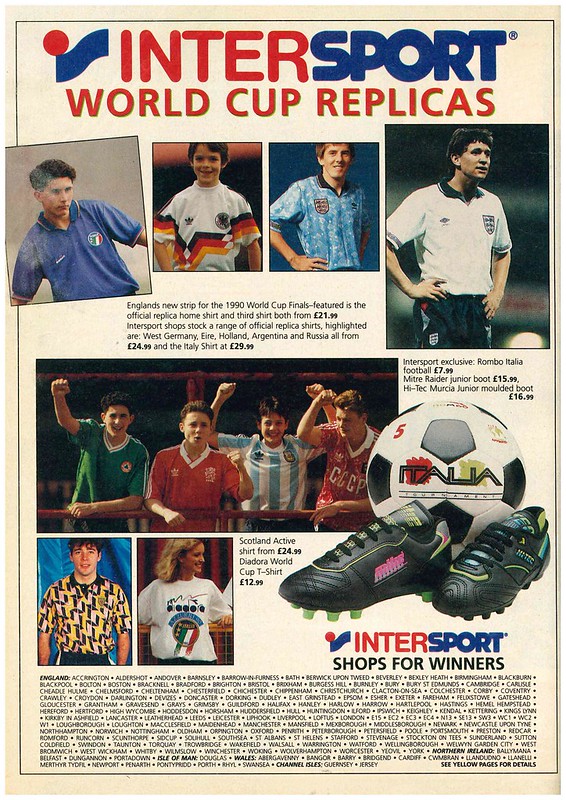