An expensively assembled team in Sky Blue are featured on the cover of this edition of World Soccer, but it’s not Manchester City, it’s Lazio.

In Jersey, there is an experiment taking place where a referee can move a free-kick forward ten yards if a defending player shows dissent or engages in unsporting behaviour.

In this edition, World Soccer has an article on satellite channels and receivers that can pick up football from around the world. One of those clubs you could watch, is Anderlecht, who get a page feature about their recent downturn in form.

Drugs were a major issue this month, with rumours of failed tests in Serie A being covered up, and one journalist suggesting that referees should be subject to random testing like players.

There is an article based on a quote from Ray Clemence that there are too many foreign goalkeepers in England, looking at the shotstoppers of the twenty Premier League clubs, noting that the two most promising English prospects, Steve Simonsen and Richard Wright, are playing outside the top flight.

Lazio get a four page profile, having spent £70m to try and win the Serie A title. They did manage it in 2000, but not since. One of those player in the expensively assembled sky blue outfit ……. was Roberto Mancini.

Two of those pages are used for an interview with Christian Vieri, who left Lazio the following summer in a big money move, becoming the world’s most expensive player when he signed for Inter Milan.

German football is in crisis with the departure of Berti Vogts as national team manager, and the DFB being rebuffed, for various reasons, in their attempts to appoint Otto Rehhagel, Christoph Daum, Jupp Heynckes, Franz Beckenbauer, Ottmar Hitzfeld, Roy Hodgson and Paul Breitner, before eventually settling on Erich Ribbeck.

It’s not just Germany who had a change in manager, the departure of Spain manager Javier Clemente after a 3-2 defeat to Cyprus in their opening Euro 2000 Qualifier got a double page spread. He was immediately replaced by Jose Antonia Camacho.

Across the border in France, Vikash Dhorasoo gets a full page feature, as the most exciting prospect in French football.

Back in Germany, Keir Radnedge reports on the success of the two Munich clubs, currently first and second in the Bundesliga.

In England, Aston Villa are top with an almost all English team (Mark Bosnich from Australia being the only foreigner in their regular starting eleven) and have money to spend following the sale of Dwight Yorke. World Soccer suggest that money could be used to bid on another English player, Andy Cole of Manchester United.

A former manager of Cole, George Graham, has new employment, as manager of Tottenham Hotspur, a move that has divided the club’s fans, given his long association with Arsenal.

In Scotland, Marco Negri is in dispute with Rangers, with manager Dick Advocaat accusing him of lying to the media about his transfer situation.

Northern Ireland’s news is dominated by the resurgence of Linfield and Glentoran, looking to win their first title in 5 and 7 years respectively, but already pulling away from the chasing pack at the top of the table.

Also in dispute with their club like Marco Negri, was future Rangers players Frank and Ronald De Boer, who want to leave for Barcelona.

Bruce Grobbelaar made a comeback of sorts, playing for Zimbabwe at the age of 41, as well as being part of their coaching staff.

Brian Glanville uses his column to question Alex Ferguson’s record in the European Cup and World Cup, in the aftermath of a TV documentary where he referred to Paul Ince as “A big time charlie”

Glanville also uses his column to question the wisdom of those who want Terry Venables to return as England manager following England’s poor start to Euro 2000 qualification. 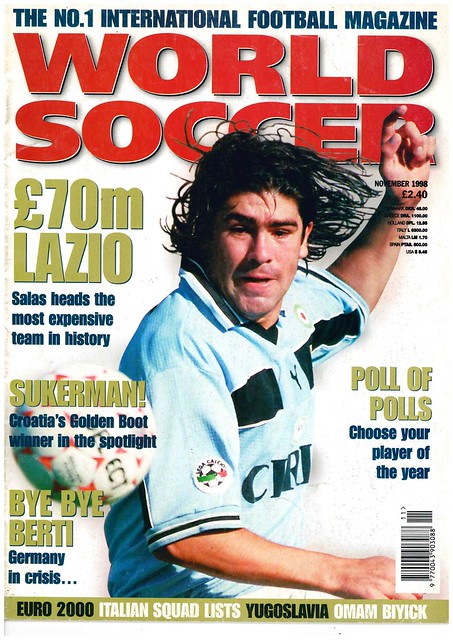 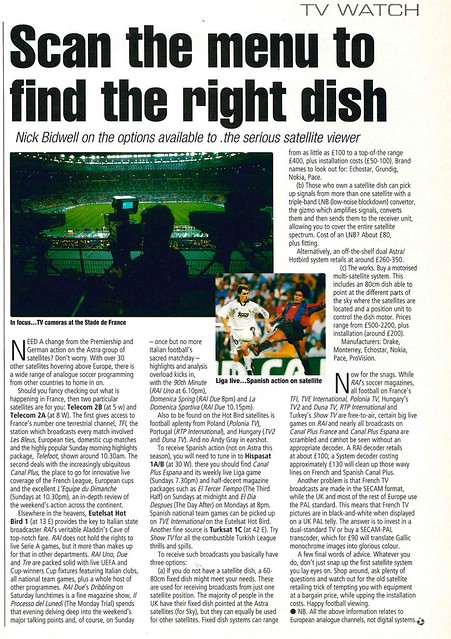 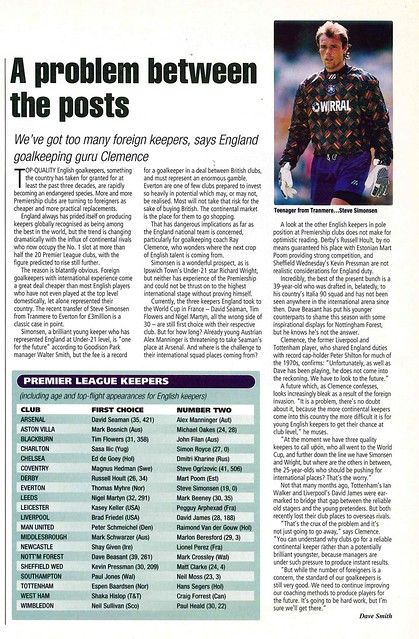 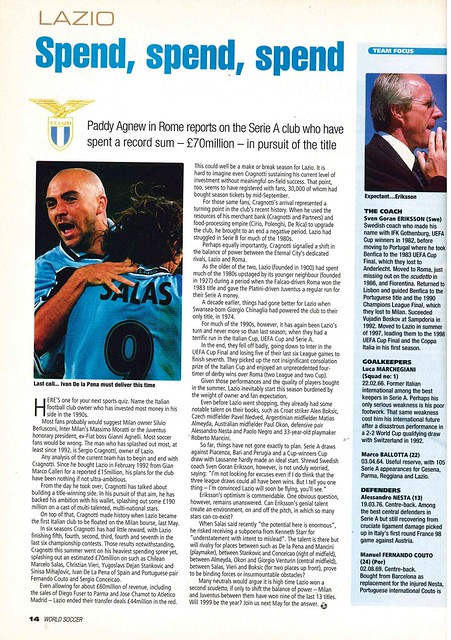 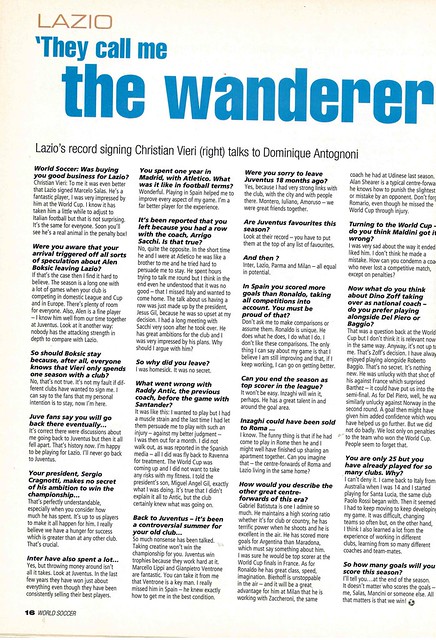 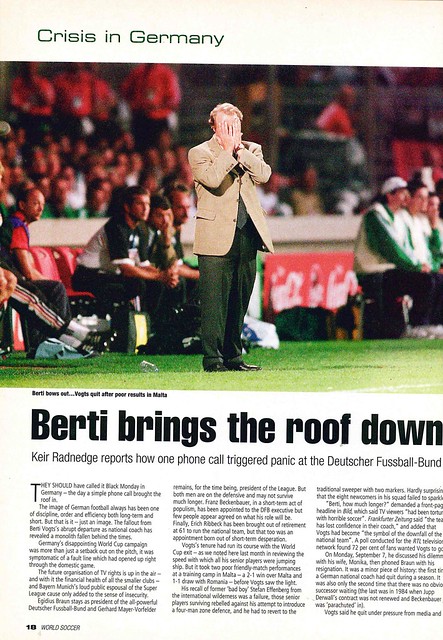 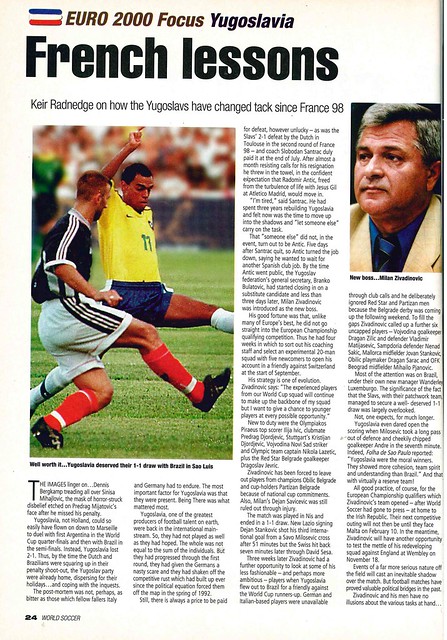 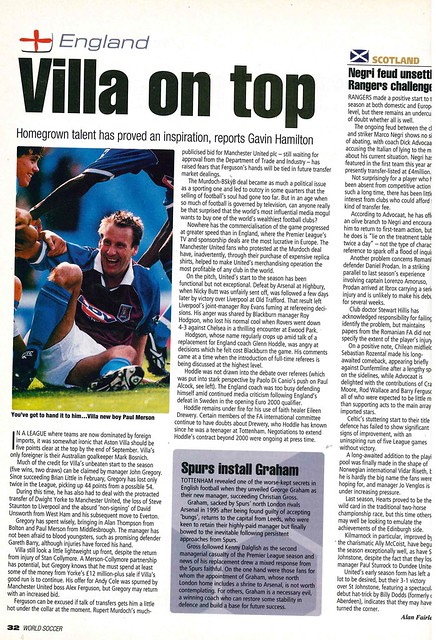 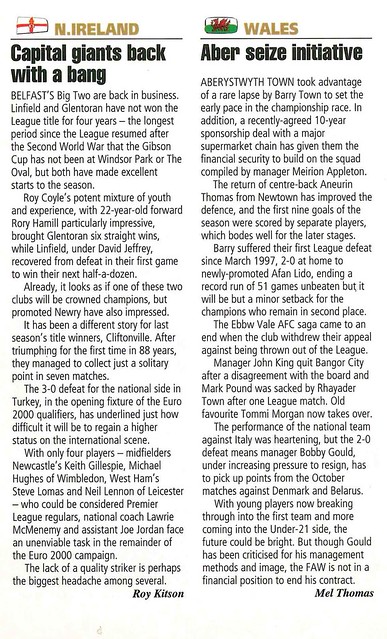 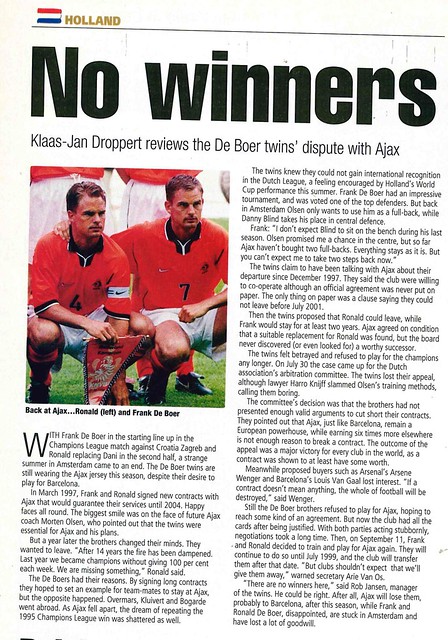 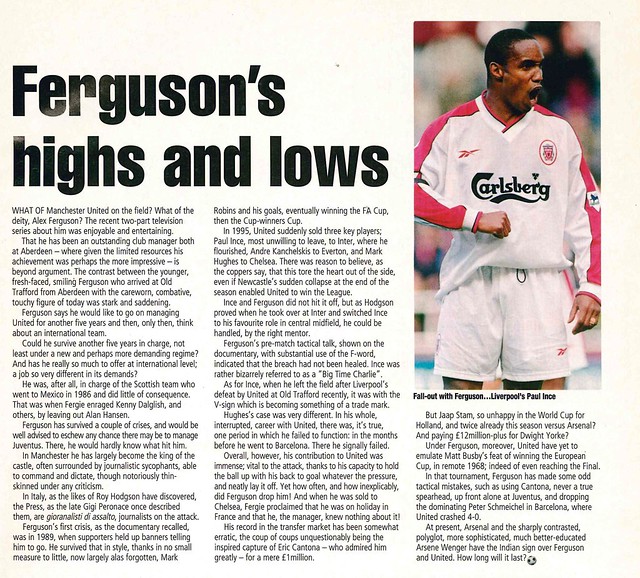 Seven cover stars as the 2000-2001 Champions League group stages get underway, as a player from each of the four (one Scottish, three English) UK teams involved, and foreign stars such as Luis Figo (Real Madrid), Zinedine Zidane (Juventus) and Patrick Kluivert (Barcelona)

Match does a double page interview with Ryan Giggs about his experiences in the European Cup, before turning over for a double page spread on selected teams involved. The four UK teams (Manchester United, Arsenal, Leeds United, Rangers) are previewed on the left page, while the right page has teams listed under ‘Foreign Faves’ and ‘The Outside Bets’

Eventual winners Bayern Munich are in ‘Foreign Faves’, and the preview says “Watch out for young Owen Hargreaves, the British teenage whizzkid” while runners-up Valencia were listed under ‘The Outside Bets’

After three poor league seasons (though they did reach two FA Cup Finals) since finishing 2nd in 1997, Newcastle United were now revitalised under Sir Bobby Robson, and Match had a joint interview with Warren Barton and Steve Harper about this.

In 2000, the internet was becoming more accessible for the public, and footballers were jumping on the bandwagon. Match met Jamie Redknapp and Rio Ferdinand at the launch of their own websites, though both players admit they’re not that internet savvy.

Redknapp says it’s a great opportunity to share his thoughts with the rest of the world, set the record straight about newspaper stories, and answer questions from fans. It’s basically Twitter, before Twitter.

Match then gives a guide to the best footballer websites, with players and managers such as Ben Thatcher, Harry Redknapp, Patrick Berger and George Boateng all having their own websites.

Patrick Berger’s website revelas that his first car was a Skoda.

George Graham gets interviewed about the state of English football, believing that English players should work on their technique, and try to be more like Germany or Holland.

Match does a double page spread on Sylvain Wiltord’s protracted transfer from Bordeaux to Arsenal, due to Bordeaux’s lack of willingness to sell, and his former club Deportivo La Coruna being entitled to a percentage of any future transfer fee.

Match does a double page interview with Eirik Bakke on his rise where he played a vital part in Leeds title challenge and played for Norway at Euro 2000, where it is revealed he is related to Monaco player John Arne Riise, who Leeds tried to sign that summer, but couldn’t agree a fee with Monaco.

Owned by IPC, who own Shoot and World Soccer, it did seem strange that they would add a third publication to their repotoire.

Ryan Giggs adorns the cover with the main feature not of him, but of how winning the double isn’t enough for Manchester United.

The editor’s note comes courtesy of the magazine’s editor Paul Hawksbee, who now presents an afternoon show on Talksport.

The lead story that week was Billy Bonds shock departure as West Ham United manager on the eve of the new season starting.

The topical cartoon in the news section is frankly disturbing.

Aston Villa had just signed John Fashanu, who was combining his football career with presenting Gladiators. In the cartoon, Fashanu is in manager Ron Atkinson’s office, when Atkinson asks him for a favour, which turns out to be Ron Atkinson becoming a Gladiator.

In other news, Nottingham Forest manager Frank Clark has urged star striker Stan Collymore to “Settle down and find the love of a good woman”

I’m not going to make a comment on that.

With or without the love of a good woman, Collymore was Britain’s most expensive footballer 12 months later after a £8.5m transfer to Liverpool.

The much hypes article on Manchester United explains that United’s share price rises when they win and falls when they lose. Hardly earthshattering revelations.

Meanwhile, ’90 Minutes Live’ is an opinion piece where fans are interviewed on an issue outside a ground.

Supporters were interviewed outside Ibrox prior to a pre-season tournament involving Rangers, Sampdoria, Manchester United and Newcastle United about a possible British Super League.

Match Of The Day, celebrting it’s 30th birthday that week, gets a double page spread in it’s honour looking back at it’s illustrious history.

With the Premier League season about to start, 90 Minutes predicted the league places for the season ahead.

They said Arsenal would be Champions, how wrong they were.

It did turn out to be an eventful season for Arsenal, with Paul Merson revealing drug addiction, George Graham being sacked for taking a bung, and on the pitch, they reached the European Cup Winners Cup final.

They were spot on with the prediction of Ipswich Town to finish 22nd, which they did, including a 9-0 defeat at Old Trafford.

In their foreign round-up, David Ginola featured prominently, unhappy that the PSG board vetoed a move to AC Milan. A year later, he ended up at Newcastle United. Tough break.

Towards the end is possibly the worst competition prize ever, as you can Richard Keys Sky Sports jacket, which aaccompanies a piece where the former TV-AM presenter is given a makeover.

If you can remember Sky’s coverage of the early years of the Premier League, it was clear he needed one.