It’s the FA Cup Semi-Finals, and this is reflected on the cover with a player from each competing club – Leicester City, Queens Park Rangers, Tottenham Hotspur and West Bromwich Albion – are featured.

As you open the magazine, there is a double page spread on the two games, with a player from each club giving their thoughts ahead of their game.

In news, Bobby Charlton was complimentary about Wigan Athletic, stating they had the potential to become a top flight club. They eventually would be, 23 years later.

After having their most successful season in the top flight, Brighton players are bringing out a pop record called “In Brighton”, described by captain Steve Foster as “It’s got a pop disco sound and it’s very complimentary about the team”

Talking of pop records, Northern Ireland have done one as well for the World Cup with former Eurovision winner Dana. It got better for the squad. As well as getting to do a record with Dana, they got a £77,000 bonus between them.

It’s all change at Everton with manager Howard Kendall placing his emphasis on young players, including goalkeeper Neville Southall, who he compared to Peter Shilton.

In competitions, you can win a trip to the World Cup Final in Madrid.

Phil Thompson uses his column to bemoan the standard of refereeing in Liverpool’s European Cup exit against CSKA Sofia, claiming they were robbed. Down to the Semi-Final stage, Thompson predicts that the final will be between Aston Villa and Bayern Munich,

There is a full page feature on club football in the USA.

There is a poster of Pat Jennings for a series called “World Cup Stars To Watch”. Jennings was rumoured to be attracting attention from clubs in North America. Not content with heading to Spain that summer, Jennings was also looking at trying to play in the 1986 World Cup.

In Scotland, the Scottish Cup is also at the Semi-Final stage, with both games being previewed. Danny McGrain’s column discusses a recent 5-0 win for Celtic against Rangers, but it wasn’t their Ibrox rivals they faced, it was a Hong Kong team with the same name, during a mid season break for Celtic.

Staying in Scotland, one of those Semi-Finalists, Forfar Athletic get previewed. Airdrie have tried a novel way to improve morale, by getting a comedian, Hector Nicol to entertain his team before matches. Nicol’s humour was described by Shoot as “Making Billy Connolly look like a choirboy”

With the World Cup approaching, Cameroon get a double page feature, with an interview with Francois Doumbe Lea and a profile of their manager, Branko Zutic.

Manchester City manager John Bond uses his column to clarify rumours about his son Kevin’s future, stating that he was staying at Maine Road.

In adverts, there is an advert for Panini’s World Cup sticker book, which is going to be free in Shoot in the coming weeks.

Going to the World Cup is Jim McLean, as part of Scotland’s backroom team. He combine that with his role as Dundee United manager, and Director at Tannadice, a role he has recently accepted.

1981-1982 was the first season of 3 points for a win in England, and Ray Wilkins uses his column to declare it a success, though admitting he’s not a fan of it.

In international news, El Salvador will only be taking 18 players to the World Cup due to costs, while Felix Magath faces a race against time to be fit for the World Cup due to injury, with the story accompanied by a picture of him being visited in hospital by Horst Hrubesch, Ernst Happel and Gunter Netzer.

In adverts, you could buy pyjamas in the colours of your favourite team’s kit – as long as you supported England, Northern Ireland or Argentina. There were also various club team options not pictured.

Shaw also comments on team-mate Allan Evans getting a Scotland recall, stating that playing against Dynamo Kiev in the previous round could be helpful for Scotland’s group game against the Soviet Union, as most of their squad is made up of Dynamo players.

He signs off by wishing Tottenham Hotspur good luck in their European Cup Winners Cup Semi-Final against Barcelona.

Villa and Spurs ties are previewed from the Spanish and Belgian viewpoints, with West Ham’s Francois Van Der Elst stating that the winners of Aston Villa v Anderlecht will go on to win the trophy.

The magazine ends with an interview with Martin Buchan, who states he is not planning to leave Manchester United, despite losing the captaincy. 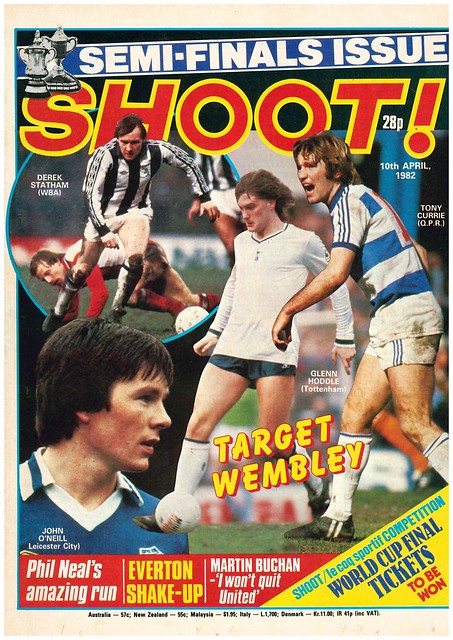 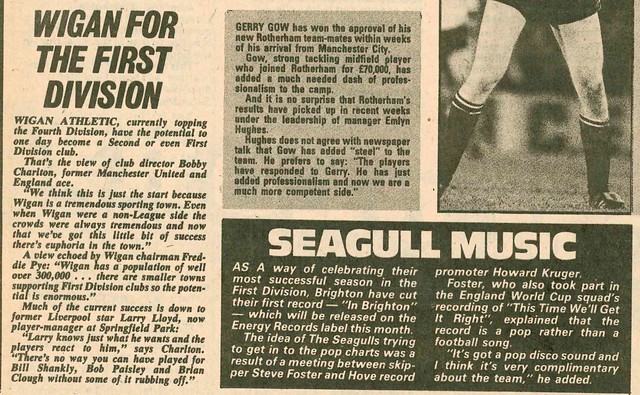 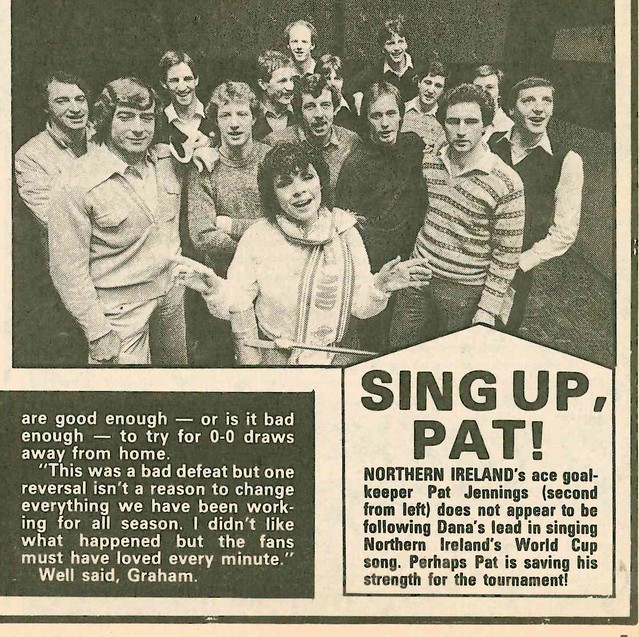 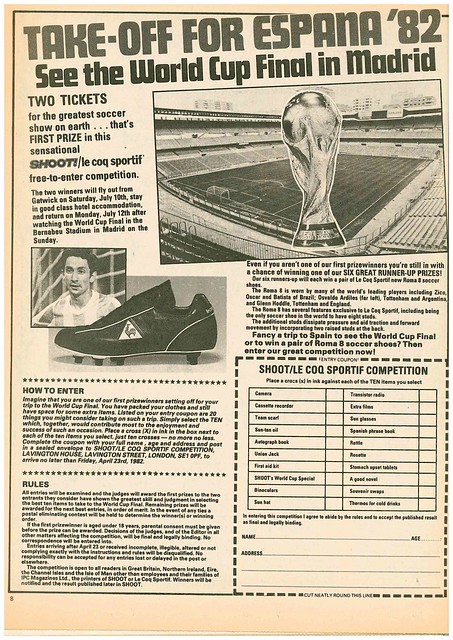 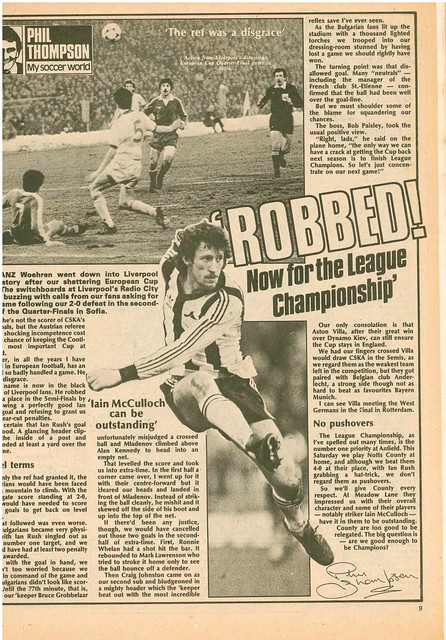 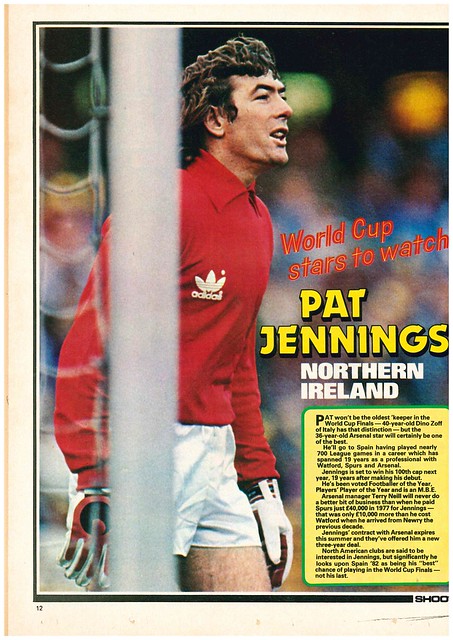 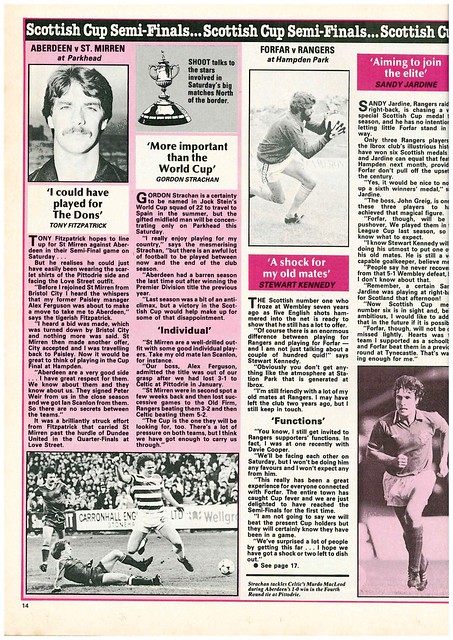 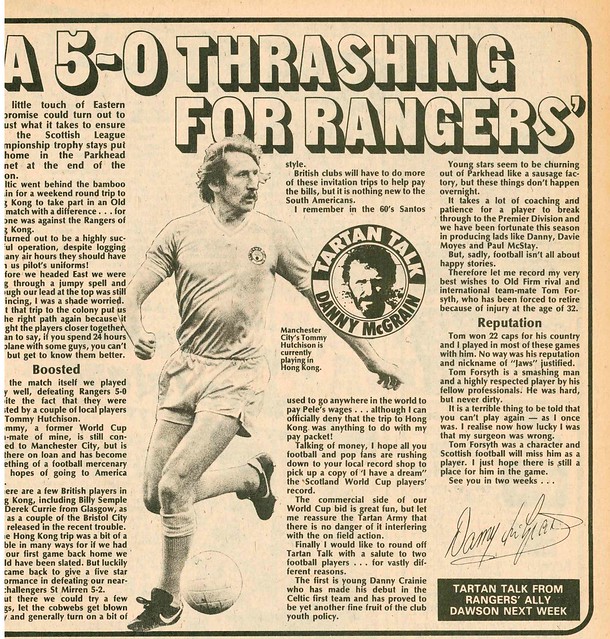 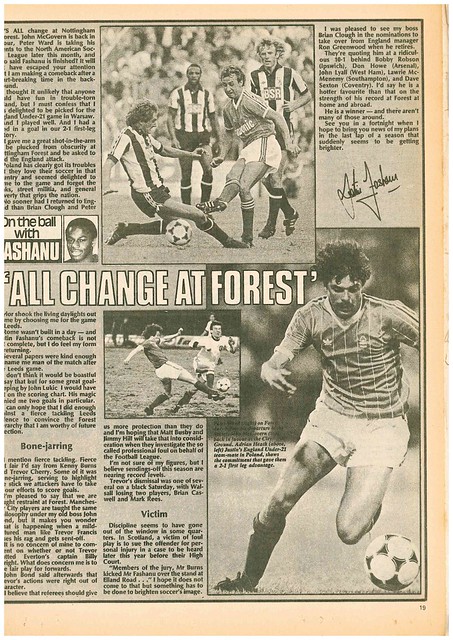 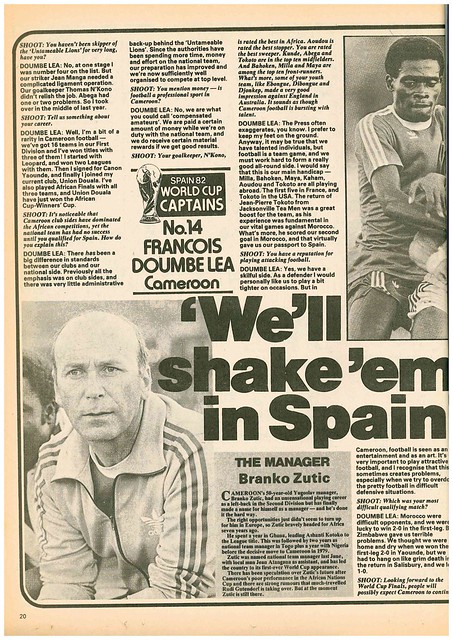 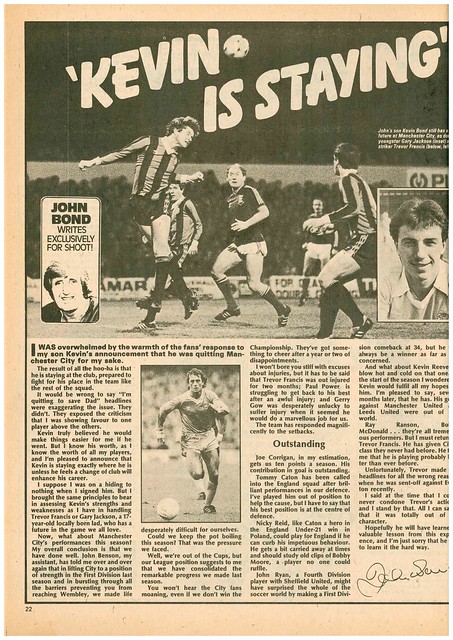 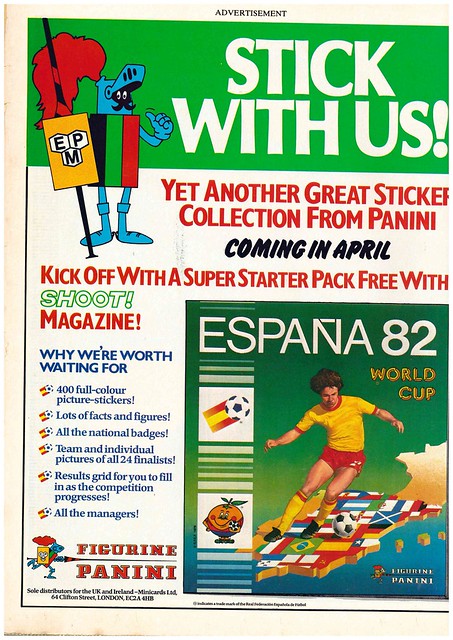 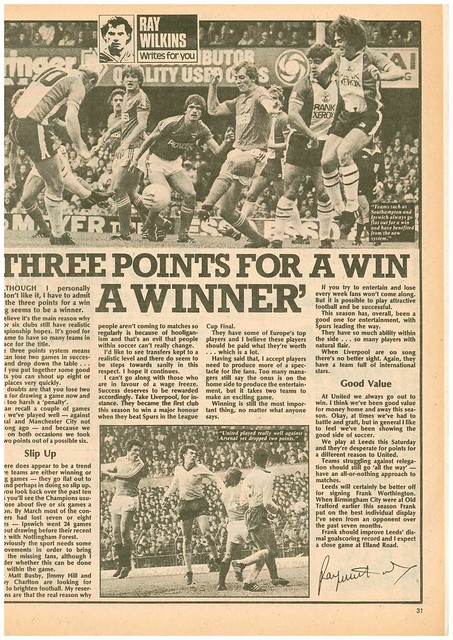 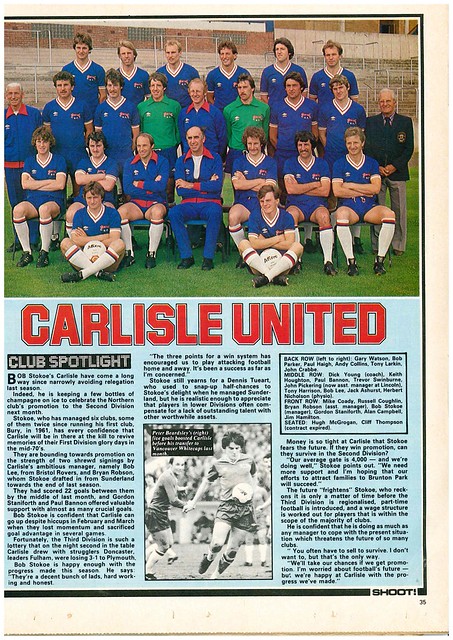 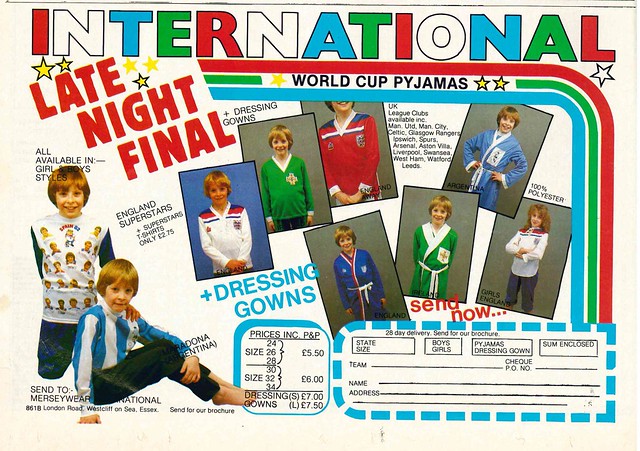 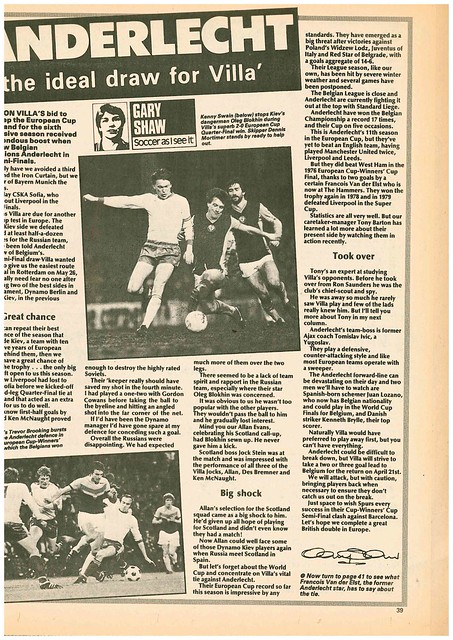 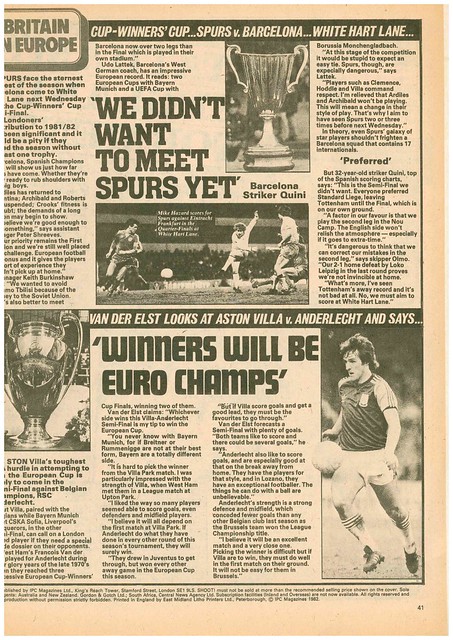 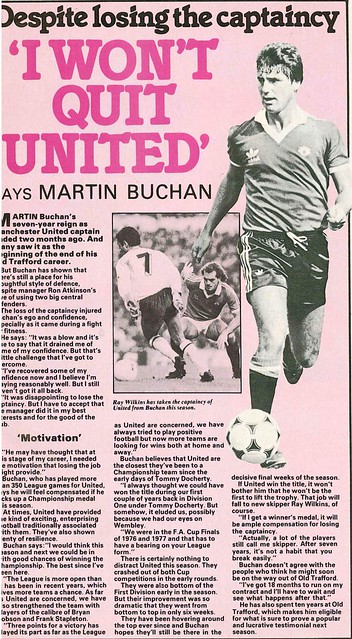