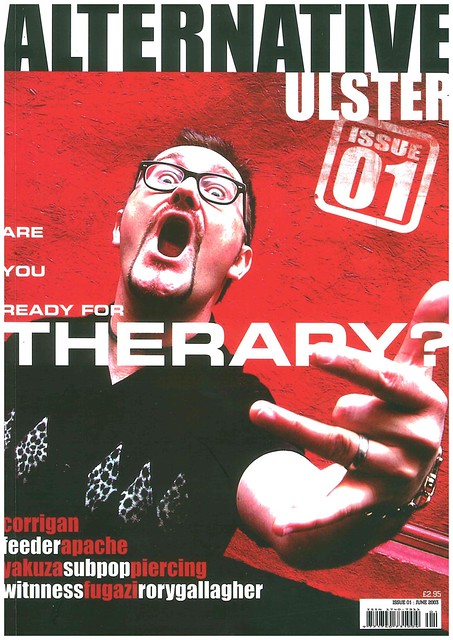 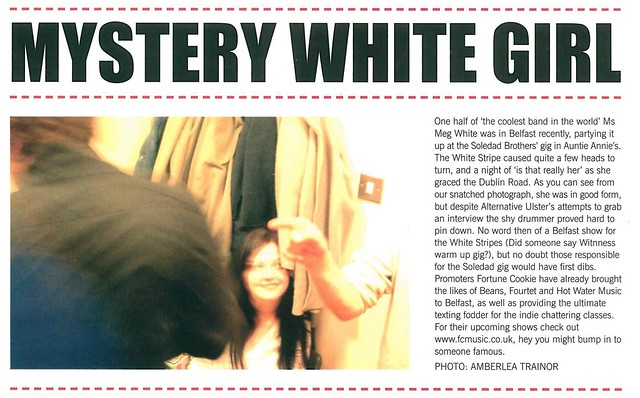 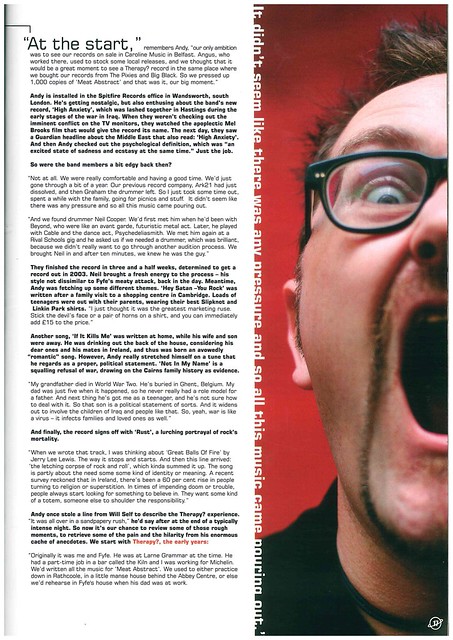 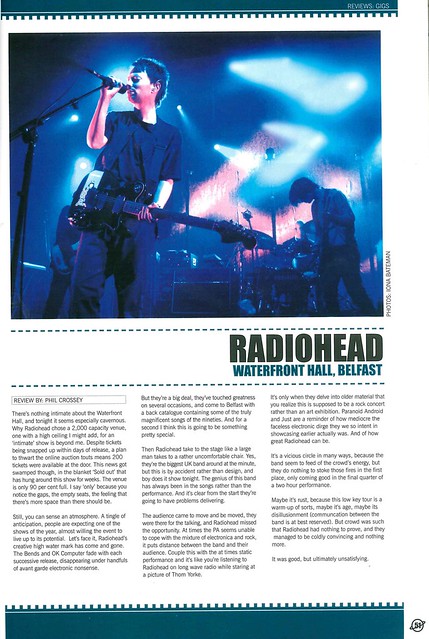 1. Chvrches and BBC Scottish Symphony Orchestra – Miracle
2. Talk Talk – Life’s What You Make It
3. KT Tunstall – Suddenly I See
4. Miley Cyrus – Nothing Breaks Like A Heart
5. Stereophonics – Chaos From The Top Down

Today, is St David’s Day, so I’ve got a treat for Welsh readers, a chart for you to celebrate your national day.

It’s not a Big Weekend, it’s the Biggest Weekend.

Not quite Radio 1’s Big Weekend, but an event primarily to fill the gap in the BBC’s schedules due to there being no Glastonbury this year, so the idea of Biggest Weekend was born.

It was a series of four concerts, one each in England, Northern Ireland, Scotland and Wales over two days over the May Bank Holiday Weekend. The days allocated for Northern Ireland would be Friday and Saturday.

Surprisingly, the Northern Ireland one was held in Belfast. I say surprisingly, because the main feature of Radio 1’s Big Weekend, was that it was held in towns or cities that don’t usually appear on tour schedules.

That was true of the other three venues – Coventry (England), Perth (Scotland) and Swansea (Wales)

Belfast was the choice for Northern Ireland, in Titanic Slipways in the East of the city.

This was a venue that had previous experience of hosting live music events, previously hosting Proms In The Park and Belsonic (in 2016).

I went to a couple of Belsonic gigs in 2016, and the big thing that stood out was that the stage was in a different location, facing the back of Titanic Centre rather than it’s back to the street outside.

Like in 2016, it was spatious. Very spatious, which made it easy for getting around on foot.

Each of the four concerts had a radio station leading it. For Belfast, it was 6 Music.

I wouldn’t be an avid listener to 6 Music, but when I do listen to it, they usually have decent tunes on it.

The line-up for this concert was varied. At £18 a ticket, even if you only saw one act, it would be worth it.

For me, there were two acts that stood out for me on the Friday, Manic Street Preachers and Beck.

Unsure of what time Manic Street Preachers would be on stage at, I booked a half-day off work, in case it was during my working hours.

As it turned out, when the set times were published on the Thursday, they would be scheduled for 6.20pm (they wre actually a few minutes late)

I could have went straight from work, but I made the most of the half-day, having a relaxing afternoon before arriving at the venue just before 5pm, to get a bite to eat before going to see The Manics.

It would be a performance without Nicky Wire, as news broke at lunchtime on Friday that he wouldn’t be onstage due to a family member being ill.

I didn’t catch the name of the stand-in, but he has nice legs according to James Dean Bradfield, talking inbetween songs, who apologised that he wouldn’t be wearing a leopardskin skirt like Nicky Wire.

One observation was that the venue had a lot of Wellends. I’m not sure why, he wasn’t performing, though it was the great man’s 60th birthday. I think they might have been there for Touts, who were performing on another stage in the venue.

Another observation was that the venue was infested with absolute fucking tramps. Puff puff vape vape everywhere you go. Standard for any outdoor event in Belfast sadly.

Anyone who smokes in a crowded public area is a dirty fucking tramp. There is no debate, it is a statement of fact. Belfast is infested with them.

Can we have just one outdoor event in Belfast that doesn’t stink of fags and vapes?

Eating outside on a nice day, going to a beer garden, going to a football match, going to an outdoor concert, walking down the street. Just some of the things you can’t do in Belfast without having to hold your nose and cover your mouth.

You can’t even queue for a bus for crying out loud.

A few years back, some people couldn’t even fly from Belfast to Glasgow because some fucking idiot couldn’t even go a short time without and lit up in the toilet, forcing the flight back to Belfast.

But yeah, i’m just a moany cunt and there’s not a serious social problem that needs to be addressed on a city and country wide basis.

Imagine being a smoker and thinking that you’re cool. Oh mate.

Mate. Mate mate mate. Oh mate. I really don’t know how to break it to you.

Cue the response that “Lots of cool people smoke, like Bill Hicks and David Bowie”.

Watching the TV coverage, every crowd shot had a vape cloud in the background. Utterly embarrassing as a showcase for Belfast.

Can’t say i’ve ever walked past Primark and seen a milly in her pyjamas having a smoke and thought she is so cool.

We are the majority and our enjoyment of events is being held to ransom by dirty tramps.

I am absolutely fed up of having to hold my nose and cover my mouth every time I go to an outdoor concert. This needs addressed and addressed as soon as possible.

Eventually, James Dean Bradfield and Sean Moore entered the stage, introduced by Stuart Maconie, jumping straight into International Blue, the lead single from their current album Resistance Is Futile (Yes, the most Manic Street Preachers sounding album title you could think of)

It was one of several new songs – Distant Colours, People Give In and Hold Me Like A Heaven that can stand up to any Manic Street Preachers classic.

Of course, the classics were played as well the first of those, Motorcycle Emptiness prompted and outburst of dad dancing from James Dean Bradfield. It was one of several dad dancing moments during the gig. It’s not a new thing from past experience.

I was a bit of a relative latecomer to The Manics, only really getting into them when they released Everything Must Go.

It was the follow-up to that album that provided the mainstay of classics, such as If You Tolerate This Then Your Children Will Be Next and You Stole The Sun From My Heart from This Is My Truth Tell Me Yours.

Sunny when I arrived at the venue, the weather had now got a bit dull. Manic Street Preachers, were anything but.

They ended on Design For Life, with Bradfield thanking everyone who attended, especially those who had seen them previously at The Limelight and Mandela Hall in the 1990s.

A good start to the music for me (there had been acts on stage from 1pm) with Beck to come. Orbital would be headlining the Friday night in Belfast, presumably because they have a song called Belfast.

Simple Minds were performing in Perth and had a hit called Belfast Child (As much as I like Simple Minds, that is an utter wank song) and sadly wouldn’t be coming to Belfast.

Manic Street Preachers more than made up for it.

To paraphrase Jim Kerr, they are still very much alive and kicking.

1. AJR ft Rivers Cuomo – Sober Up
2. Florence and the Machine – Hunger
3. Noel Gallagher’s High Flying Birds – All You Need Is Love
4. Arctic Monkeys – Four Out Of Five
5. Manic Street Preachers – Hold Me Like A Heaven

First of all, apologies for there being no Friday Five last week. It was due to a combination of packing for a weekend away and recovering from Noel Gallagher.

That meant I didn’t get to do a Eurovision chart. Better late than never, here’s a chart to get you in the mood for Israel in May 2019.

Firstly, an apology for there being no Friday Five. I was either busy or lazy, depending on how you look at it, and didn’t get a chance to do one.