Paul Ince, accompanied by the headline “JUST CHAMPION!” is the cover star of Shoot, as Manchester United have just won their first league title in 26 years.

The title success must have come too late for Shoot’s printing deadlines, as there was no features about it in the magazine.

On the inside cover, there is a poster of three of Juventus stars – Roberto Baggio, Gianluca Vialli and Roberto Baggio. Curiously, Baggio was pictured in action for Italy.

In news, Brian Clough has announced his retirement, and Shoot prints various tributes from players and managers.

Crystal Palace returned a lot of their allocation of tickets for the FA Cup Final, with Chairman Ron Noades requesting that the FA redistribute them equally to fans of the two finalists, Arsenal and Sheffield Wednesday.

Marco Van Basten has said that Manchester United are equipped to dominate European football for years to come, adding that the prospect of them playing in the following season’s European Cup is “An exciting prospect, but also a frightening one”

Cyrille Regis could be heading back to West Brom after being free transferred by Aston Villa.

There are rumours of departures at Manchester City, with Niall Quinn (Porto), David White (Aston Villa) and Keith Curle (Sheffield Wednesday) all attracting interest from other clubs.

Manager Peter Reid could also be on the move, as his friendship with Liverpool Chairman David Moores could make him a candidate for the manager’s job at Anfield if Graeme Souness is sacked. Reid was sacked by City in August after a poor start to the following season.

Liverpool and Leeds began the season at Wembley in the Charity Shield, and endured miserable seasons. Shoot gives two pages looking at where it went wrong for them both.

Colin Cooper has told Milwall he doesn’t want to be sold. He was that summer, to Nottingham Forest.

Stoke City, promoted from the Second Division (Third Tier) get a feature, where they already have ambitions of reaching the Premier League. They wouldn’t achieve it until 2008.

Grantley Dicks of Bath City gets a feature, mostly about his disciplinary record which matches that of his brother Julian.

Jimmy Greaves letters sees him admit he was wrong that Eric Cantona would be a bad signing for Manchester United, and announce he will be co-hosting (with Ian St John, of course) a show called Sporting Questions, a sporting version of Question Time.

In foreign news, Andy Herzog has a curious goalscoring motivation – his uncle sends his Austrian cakes when he scores, and dog food when he doesn’t. Marco Van Basten has given AC Milan a boost by returning in time for the title run-in, while in Spain, Sevilla’s two Diegos – Simeone and Maradona are in trouble for not attending a Spanish FA disciplinary hearing after a brawl against Cadiz. Both players were believed to be on holiday.

The was also a competition to win a VHS of 501 German Goals.

Peter Ndlovu gets a two page feature, focusing on his travels to play for Zimbabwe in World Cup and African Nations Cup Qualifiers.

Mark Hughes gets a double page feature, with tributes from team-mates and opponents, having become the 10th player to score 100 goals for Manchester United. He would have another milestone coming up, having just won his 49th cap for Wales.

Scotland have suffered their biggest defeat in 18 years and are certain to miss their first World Cup since 1970. Staying in Scotland, Jimmy Nicholl has announced his retirement from playing to concentrate on managing Raith Rovers. Nicholl had been linked with the Northern Ireland manager’s job, as Billy Bingham was expected to retirement in the summer of 1993.

Bingham did retire in November 1993, and Nicholl was interviewed for the post but was unsuccessful. He tried again in 2004, and was again unsuccessful.

Shoot announces the result of a recent Teletext poll to reveal Britain’s Most Fervent Derby. The winner was Rangers v Celtic with 18%, beating Newcastle v Sunderland (12%) 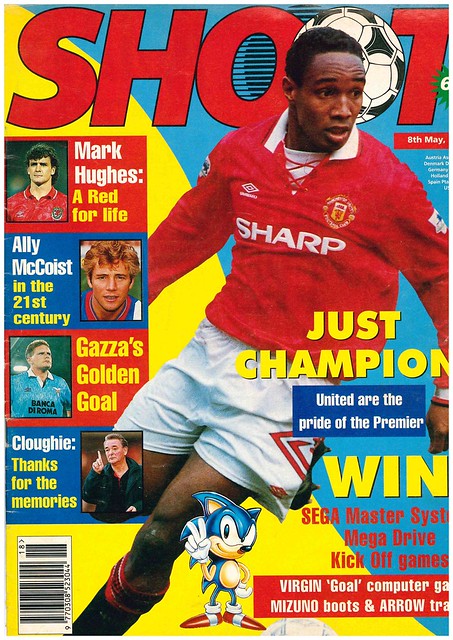 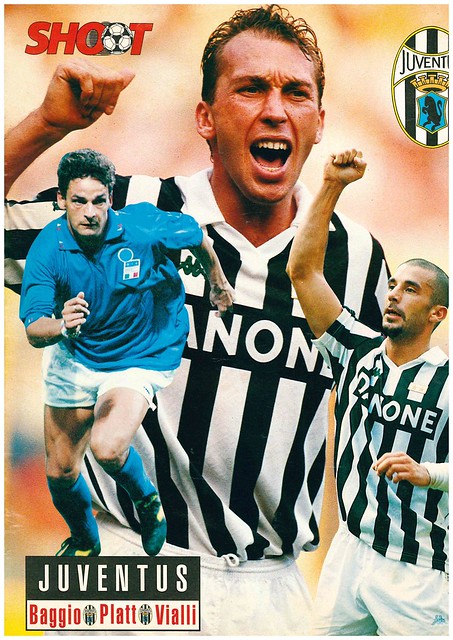 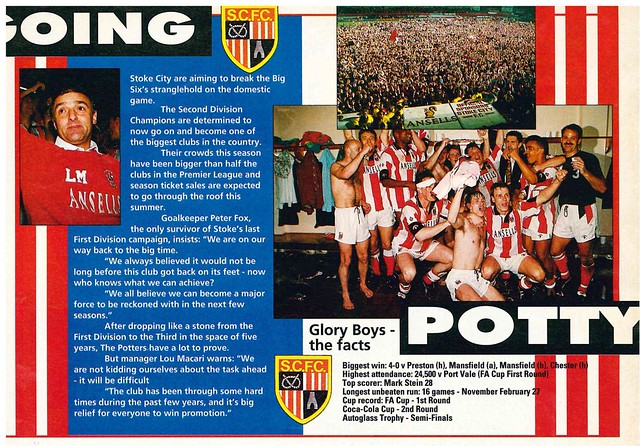 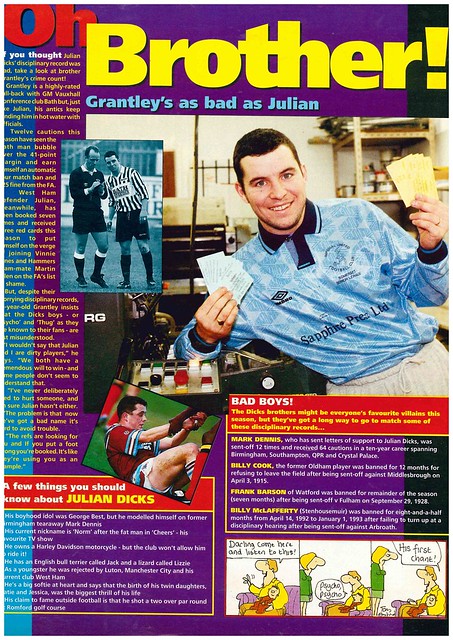 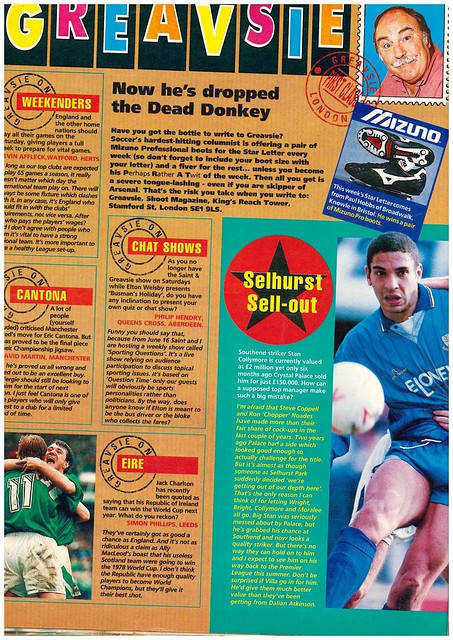 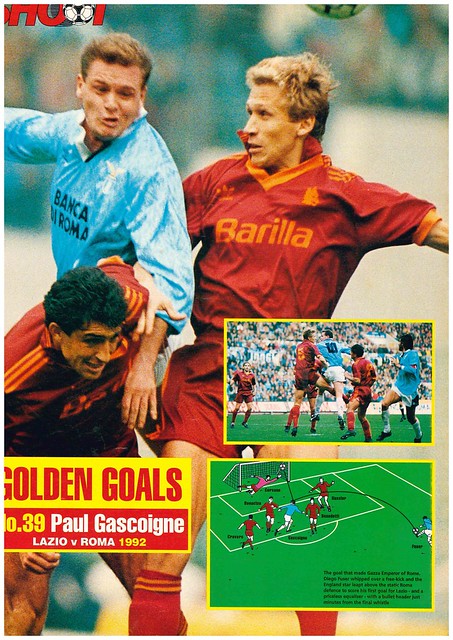 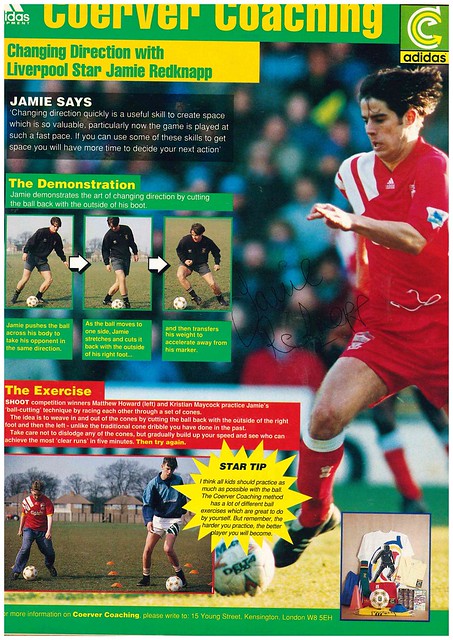 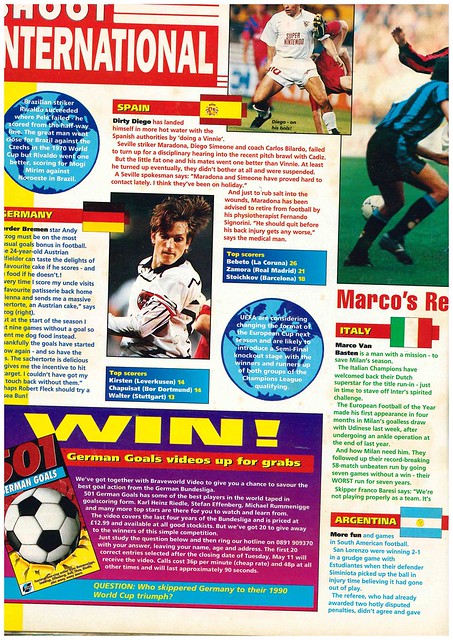 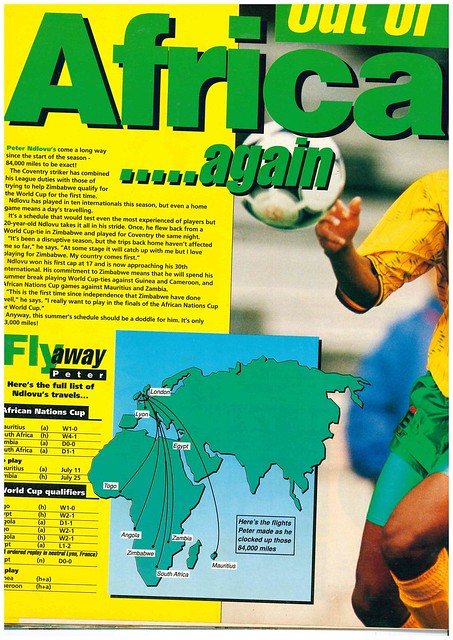 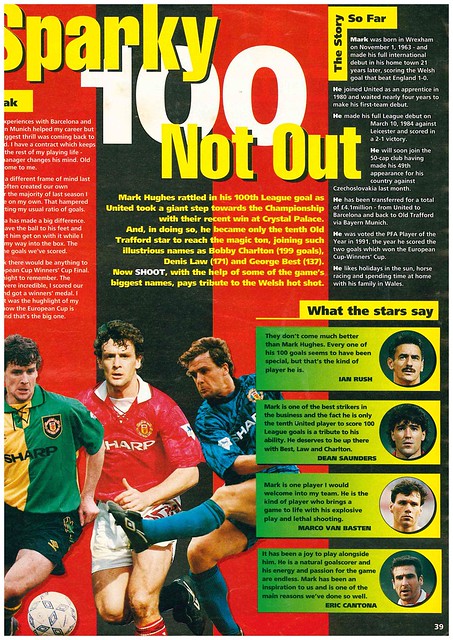 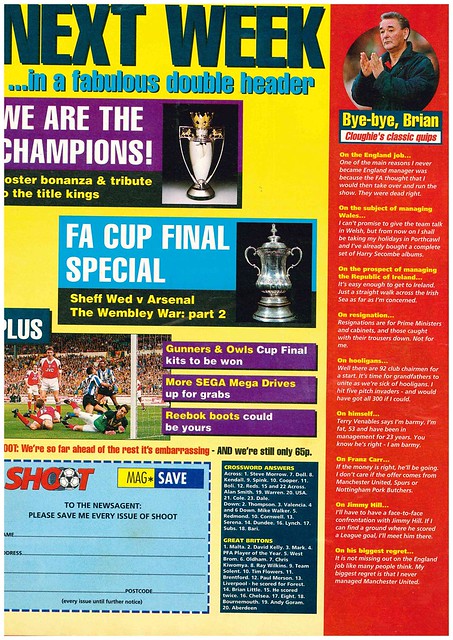 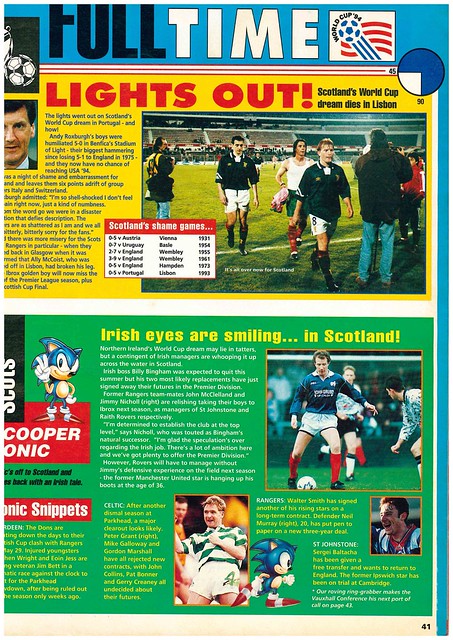 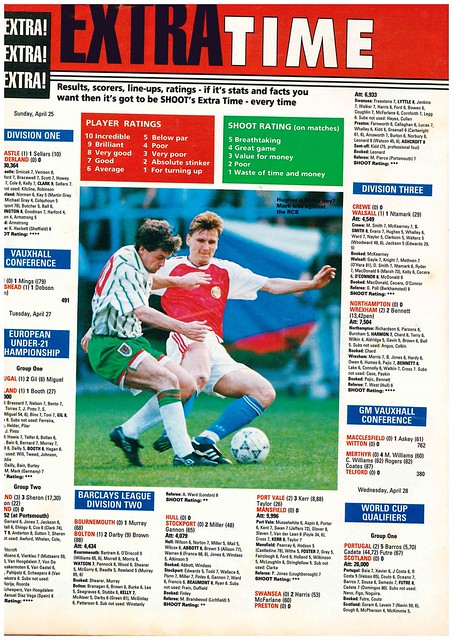 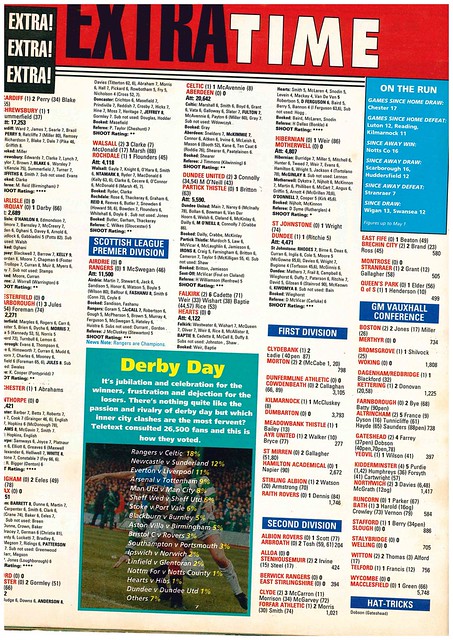 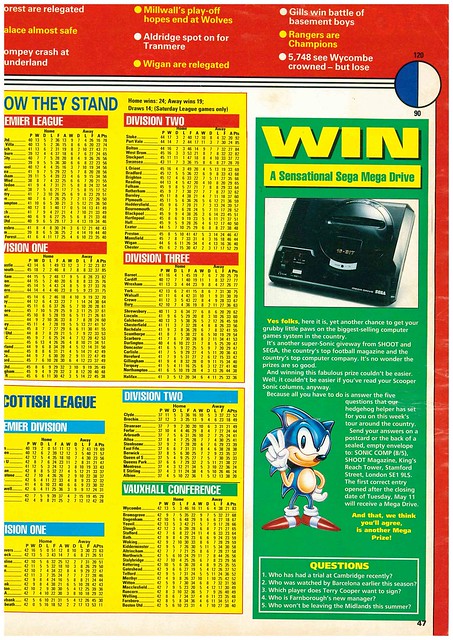 Tony Yeboah, having just scored a screamer for Leeds against Liverpool is the cover star of Shoot, with the headline reading ‘THE BEST GOAL EVER?”

In news, Chelsea manager Glenn Hoddle has been promised a Lamborginhi Diablo if Chelsea won the league in 1996. Chelsea finished 11th, but it didn’t stop Glenn Hoddle from being appointed England manager.

One of Hoddle’s signings for Chelsea that season, Ruud Gullit gets immortalised in the form of a double page comic strip of his career, called ‘The Ruud Gullit Story’

The story of two Aston Villa team-mates gets a rather curious introduction.

“The Bosnian War will be forgotten as two members of the warring factions declare peace in the heart of England” referring to the friendship between Mark Bosnich and new Villa signing Savo Milosevic.

The recent retirement of Marco Van Basten is marked, with a full page looking back at his career highlights, with the headline ‘THANKS FOR THE MEMORIES’

Jimmy Greaves uses his letters page to dismiss Trevor Francis claims that Tony Yeboah’s recent goal against Liverpool was the best goal ever, by listing his Top Six, with the winner being a goal for Ferenc Puskas against england in 1953.

A writer from Preston writes in to suggest that Gary Lineker and Alan Hansen should be put in charge of the FA.

Meanwhile, Newcastle United’s title chances get an endorsement from a ‘Jo Leon’ in Sutton Coldfield.

Joleon Lescott is from the West Midlands, and would have been in Shoot’s readership demographic in 1995. Surely not?

This edition of the Magazine Archive sees us look at Shoot from 28th April 1990.

This week, was focusing on the Rumbelows Cup (That’s Carling Cup in modern currency) Final between Nottingham Forest and Oldham.

Then, Forest were a top flight club while Oldham were riding high (Getting promoted in 1991, and being Premier League founding members in 1992) in the Second Division (That’s The Championship in modern currency)

With the two clubs not meeting in the league that season, the cover image is of an Oldham player in a challenge with Manchester United’s Bryan Robson during the recent FA Cup Semi-Final between the two sides.

Personally, I would have went with a split image of a player from each team.

Each team gets a double page spread preview

He rates each player in the starting 11 and 2 subs out of 10, with Nottingham Forest scoring 103 and Oldham scoring 104 with Cottee declaring that Oldham would win.

Nottingham Forest won the final 1-0 with a goal from Nigel Jemson, who 14 years later would be playing for Ballymena United.

Meanwhile, there is a competition to win flights and tickets to see England’s World Cup games against Republic Of Ireland or Holland.

Keir Radnedge’s column (He was the editor of World Soccer, owned by IPC who also owned Shoot)focusing on the rest of the world, sees FIFA President Joao Havelange stating that he wants to see China host the 2002 World Cup finals, while Japan have stated they wish to bid to host this event.

Japan did eventually host the 2002 World Cup, but in a co-hosting arrangement with South Korea.

That week, it was also announced that Portugal are wishing to bid to host the 1998 World Cup, in a candidate list which also includes Switzerland, Morocco, France and Brazil.

France were awarded hosting rights to the competition, which they won, beating Brazil 3-0 in the final.

Portugal (Euro 2004) and Switzerland (co-hosting of Euro 2008) have since gone on to host further tournaments, while Brazil (2014 World Cup) and Morocco (2015 African Nations Cup) are scheduled to host tournaments withing the next five years.

Morocco would also have a failed bid to host the 2010 World Cup, losing out to South Africa.

The build-up to that summer’s World Cup continues with team previews of Italy, Romania, Holland, England and Scotland.

There is also a double page spread of Stuart Pearce proving how hard he is by driving a tank.

He admitted that he almost joined the army after leaving school, and blames not getting in on telling them that he had an application pending with his local police force.

Jimmy Greaves letters page is an eye-opener as Richard Barlow from Heaton suggests that England should bring Ray Wilkins to the World Cup in Italy.

Julie Glover from Kent dishes it out to Greavsie over his prediction that Crystal Palace wouldn’t stand a chance against Liverpool in the FA Cup Semi-Final at Villa Park.

Paul Knauer from Avon writes in to complain about the Third and Fourth Division (That’s League One and League Two in modern currency) Play-Off Finals at Wembley as it devalues the prestige of the venue.

Jimmy Jones from Wallasey in Merseyside writes in to congratulate Kenny Dalglish on unearthing a world beater in Ronny Rosenthal.

Oh hindsight, what a wonderful thing.

In the latest league standings, Liverpool lead Aston Villa by two points with a game in hand, while Leeds, Sheffield United and Newcastle United are locked in a tight battle for promotion to Division One (That’s Premier League in modern currency)

In Scotland, Rangers are facing competition from Hearts and Aberdeen for the title, with Celtic 15 points behind in 4th.

The ad for the following week’s edition has the headline “STEWART HITS OUT”, referring to Tottenham Hotspur’s Paul Stewart.

Meanwhile, a double page spread is dedicated to an explosive interview with Charlie Nicholas, then of Aberdeen, declaring that he is leaving Pittodrie and that he is “Finished” with Scottish football.

He signed for the very much Scottish Celtic that summer.

Think of it as Corinthan figurines, but a bit bigger.