Mark Wright is the cover star of Shoot as he wants to be part of the England squad that goes to Mexico 86 after being dropped for England’s recent friendly in Israel.

His determination to reach Mexico was in vain, as a broken leg sustained playing for Southampton would rule him out, though he would get to play for England in the 1990 World Cup.

They wouldn’t get it as the match finished a 1-1 draw.

Another veteran hoping to go to Mexico was Kenny Dalglish, now player-manager at Liverpool, on the verge of winning his 100th cap in Scotland in the friendly against Romania. However, like the cover star Mark Wright, he would have the action at home after missing out through injury.

Not to be left out, Wales get a feature, as their recent friendly saw a changing on the guard, as Joey Jones retired as joint most capped player, while Malcolm Allen made his debut, and was already compared to Mark Hughes.

Wales are in Dublin for a friendly as the opposition in Jack Charlton’s first game as Republic of Ireland manager, and Charlton gets a full page feature.

BBC pundit Bob Wilson gets a double page column, where he states that Bruce Grobbelaar is the best goalkeeper in England.

Another Scotsman writing for Shoot is Charlie Nicholas, writing about his boyhood idol Kenny Dalglish, who scored six goals for Celtic against Kilmarnock in the first game Nicholas went to, and urges Alex Ferguson to select him for Scotland’s World Cup squad.

Bryan Robson uses his column to hit back at Kevin Keegan, who suggested that he should be playing a Sweeper role for England, stating that his best position is as an attacking midfielder.

This edition is all about the World Cup, as Hungary get a full page feature, looking at their chances in Mexico.

Hearts, billed as “The club that shocked Scottish soccer” get a double page spread looking at their success under Wallace Mercer.

1986 was an agonising year for them, as they lost the league on the last day, then lost the Scottish Cup Final the following week.

Staying in Scotland, Dundee United manager Jim McLean hits out at stayaway fans, fearing that a lack of gate revenue will force the club to sell stars such as Maurice Malpas and Richard Gough.

Transfer Deadline Day isn’t a modern phenomenon, as Shoot features Colin West, who signed for Watford on Deadline Day the previous year, and Shoot looked at the changes he had to cope with, moving clubs at short notice.

One player who moved more recently was Peter Davenport, who left Nottingham Forest for Manchester United, tells Shoot that he had joined his dream club, having stood on the Stretford End as a lad.

It was the continent where English players might be moving to in the future, with PFA chief Gordon Taylor warning that English football could be losing it’s star players to clubs from Italy and Spain.

It’s derby say in Birmingham as Villa and City go head to head as both clubs are desperate for points to avoid relegation, with Andy Gray of Villa and Wayne Clarke of Birmingham both interviewed.

Going back to the World Cup, Chris Waddle tells Shoot that he fears getting axed from the England squad due to his poor form.

On the back page, there is a profile of Liam Brady. 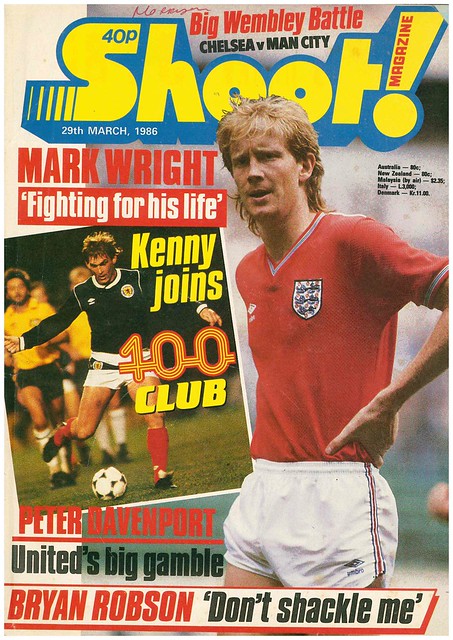 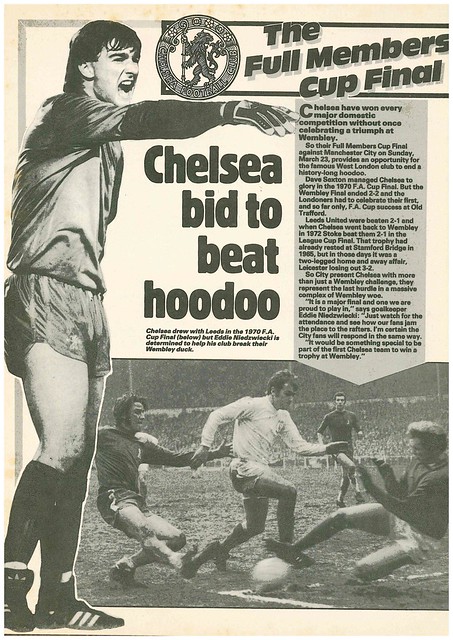 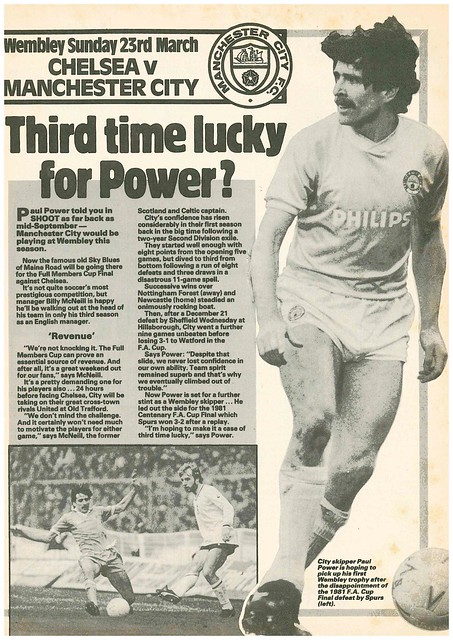 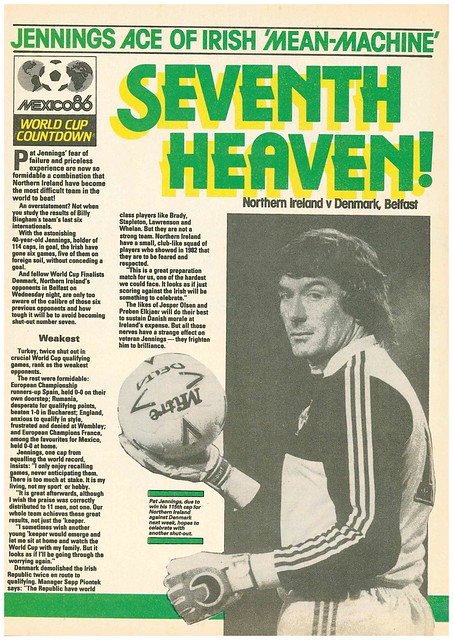 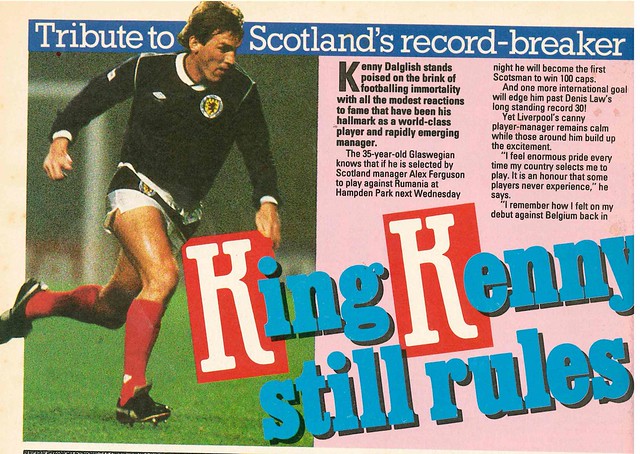 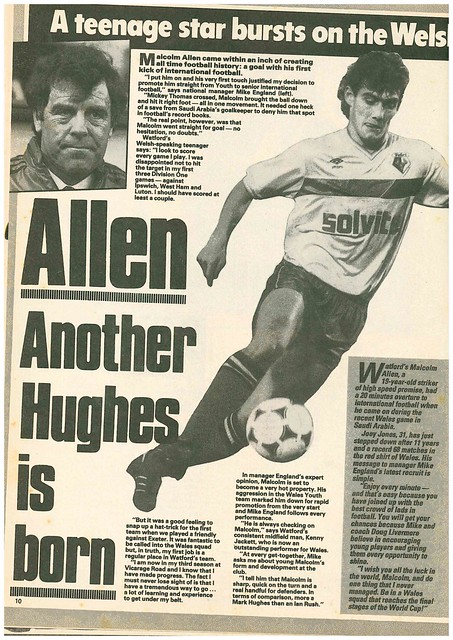 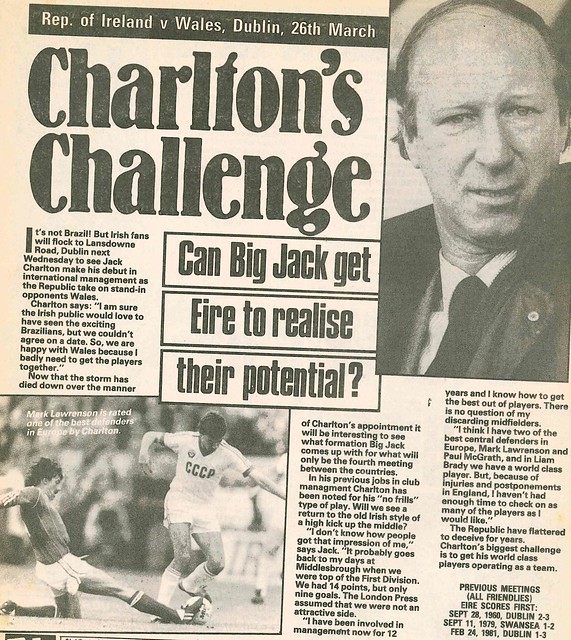 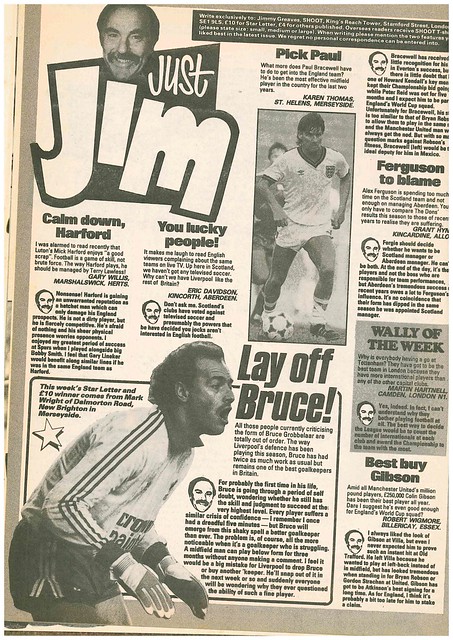 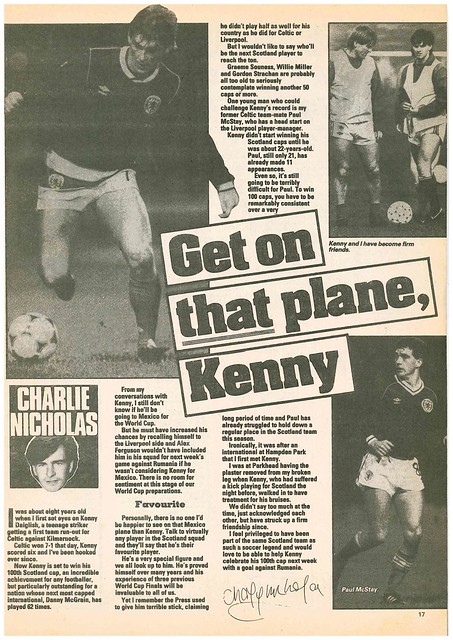 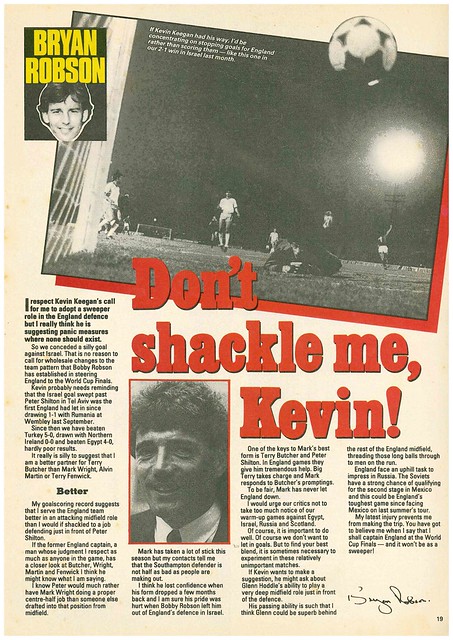 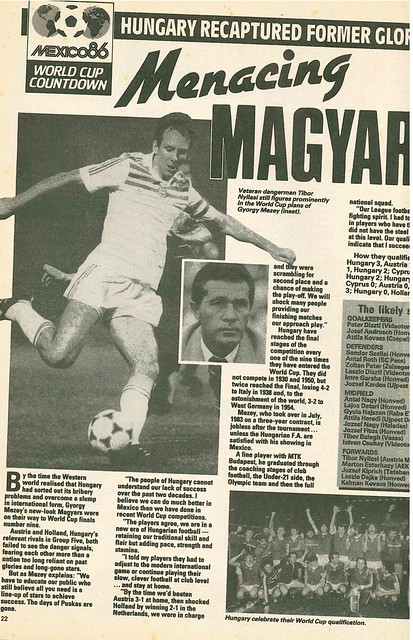 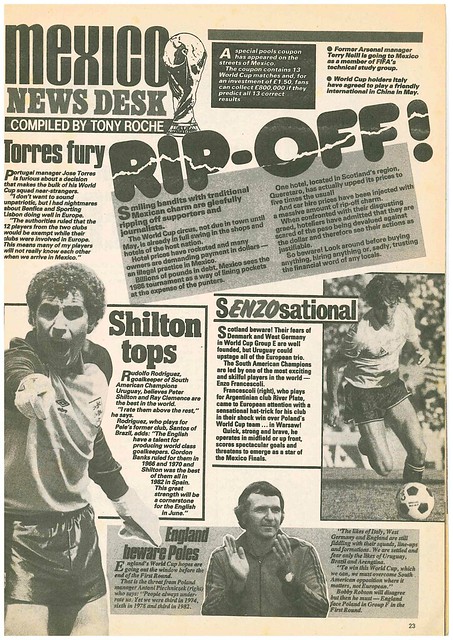 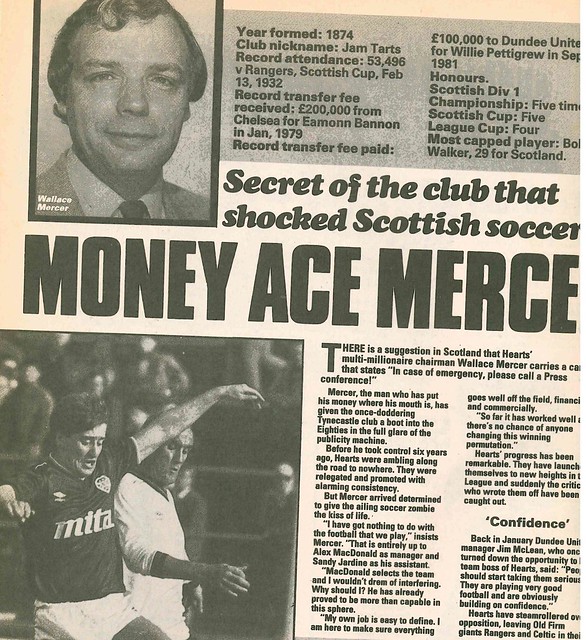 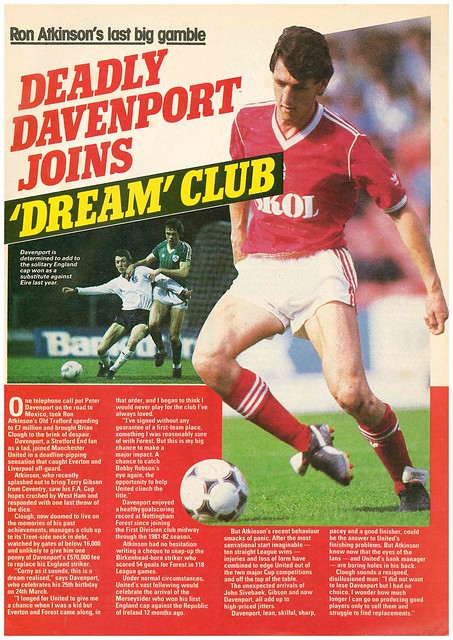 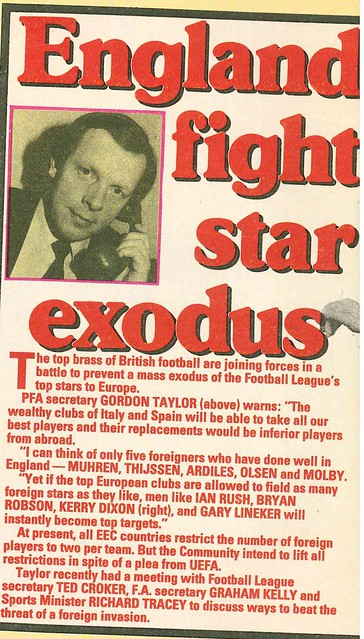 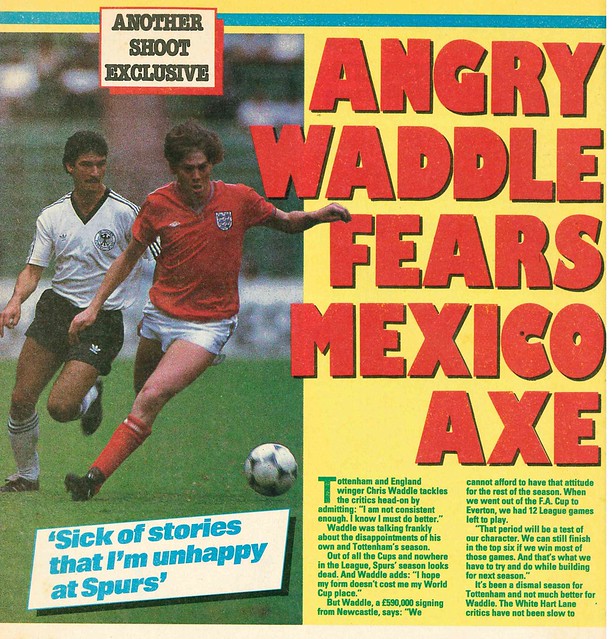 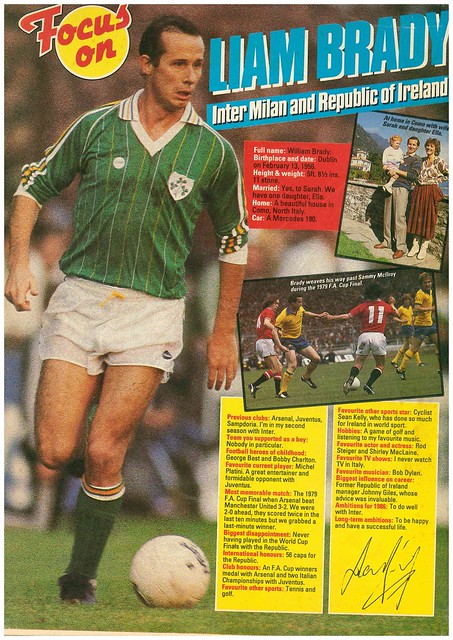 Mark Hughes, in the early months of his first season at Barcelona, is the cover star of this week’s edition of Shoot.

His fellow cover star Kerry Dixon is fighting back at critics who criticised his performance in England’s recent friendly defeat against Sweden.

Dixon will be on your TV screens at the weekend as his Chelsea team take on Manchester United, with United goalkeeper wanting revenge for the previous season’s defeat to Chelsea at Old Trafford during the title run-in. The previous season’s meeting was between two teams at the top, this time around it’s between teams in the bottom half.

In news, John Wark is wanted by Hearts, Aberdeen and Norwich, while Mickey Thomas is wanted by Wichita Wings in North America.

One man who did move was Kevin Richardson, who moved from Everton to Watford, and got a phone call from Elton John welcoming him to the club, and believed it was a wind-up from his former Everton team-mates.

Everton supporters with a tenner spare could join their Fan Club, advertised in this edition.

There were plans for a testimonial for Pat Jennings before the end of 1986 at Windsor Park between an All-Star British XI to take on a European XI.

In the editor’s column, editor Peter Stewart rubbishes the idea of a proposed “Super League”, pointing to the success of smaller clubs such as Wimbledon, Oxford and Charlton.

The same column also praises Luton Town for their ban on away supporters at Kenilworth Road, as they aim to combat hooliganism.

Brian Clough tells Shoot that he doesn’t want Forest star Franz Carr to get an England call-up, because his former club Blackburn will be due a payment as part of the transfer arrangement.

Talking of England, they’ve been invited to a tournament of former World Cup winners in Brazil in 1989 to commemorate 75 years of football in Brazil. England were paired in the same group as Brazil and Uruguay.

It was a tournament that Enzo Bearzot, Italy’s 1982 World Cup winning manager, won’t be taking part in, having just resigned from his role as national team manager.

Mark Wright is on the comeback trail after an injury during Southampton’s FA Cup Semi-Final against Liverpool which ruled him out of the World Cup in Mexico. He talks to Shoot about his experiences coming back from injury.

In Glasgow, it is young players that are the talk of the town, with Shoot doing a feature on breakthrough stars Tony Shepherd (Celtic), Ian Durrant and Derek Ferguson (Rangers)

Another (relative) youngster making a mark was 32 year old Wolves manager Brian Little, who gets a double page spread in what Shoot describe as “Football’s hardest job”

Cover star Mark Hughes gets a double page feature, where he lists his favourite things. Since you ask, his favourite bands are The Jam and U2.

Also getting a double page profile are Derby County, who Shoot describe as “on the march”, and so it proved as they got promoted to Division One in 1987.

The magazine ends with Charlie Nicholas uses his column to urge Scotland fans to stand by newly appointed manager Andy Roxburgh after a disappointing start to their Euro 88 Qualifying campaign. 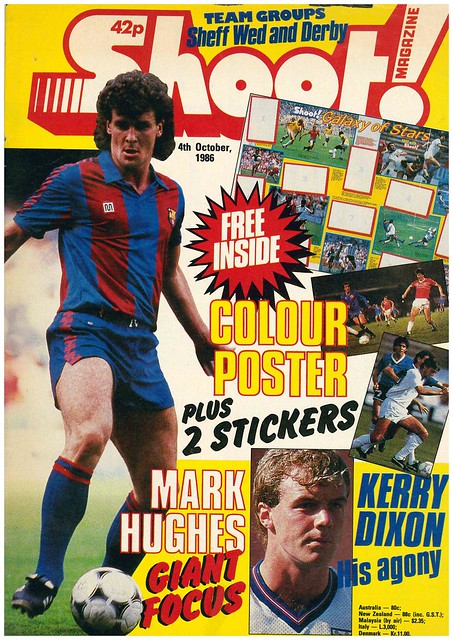 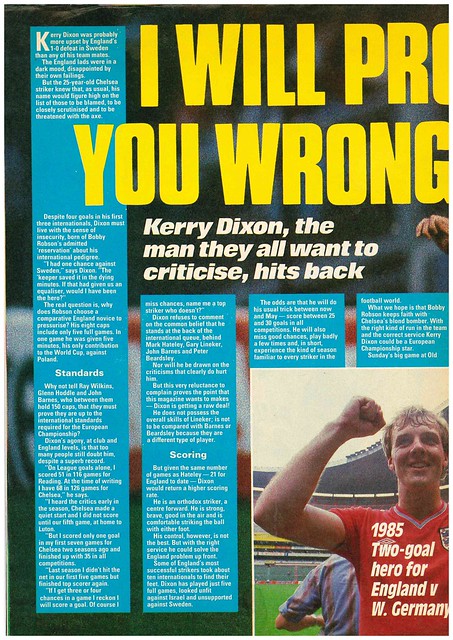 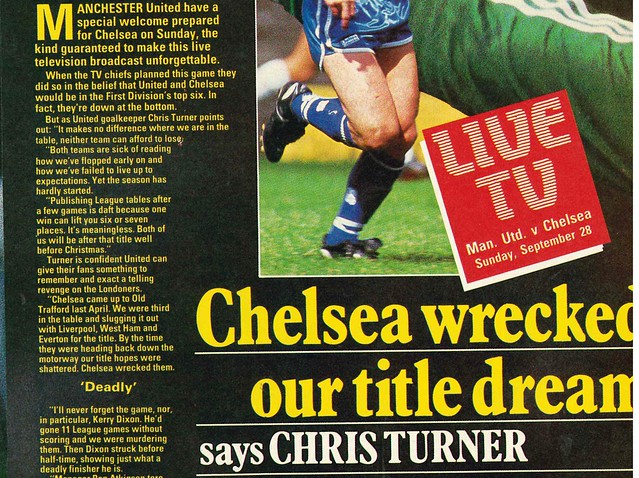 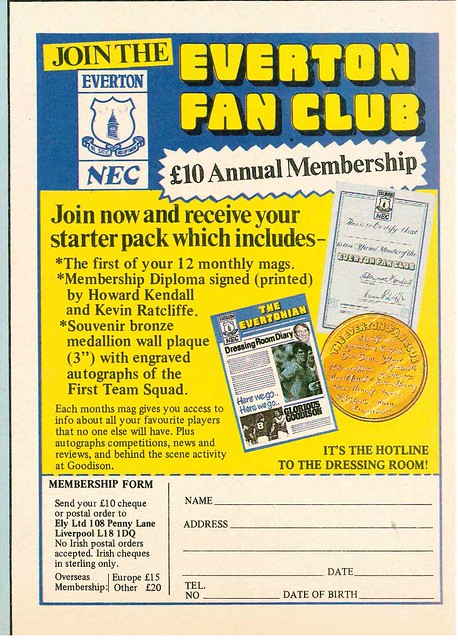 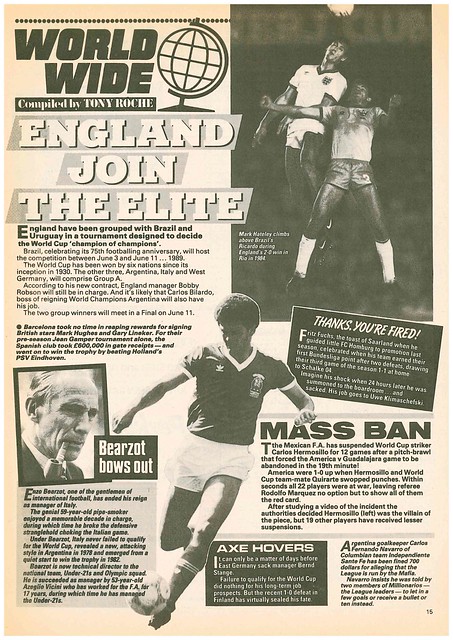 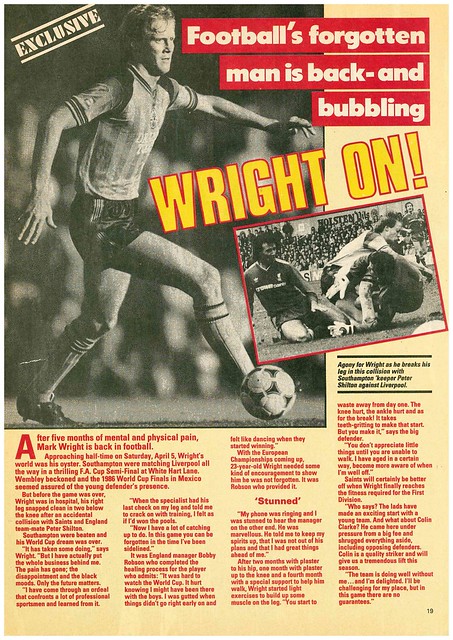 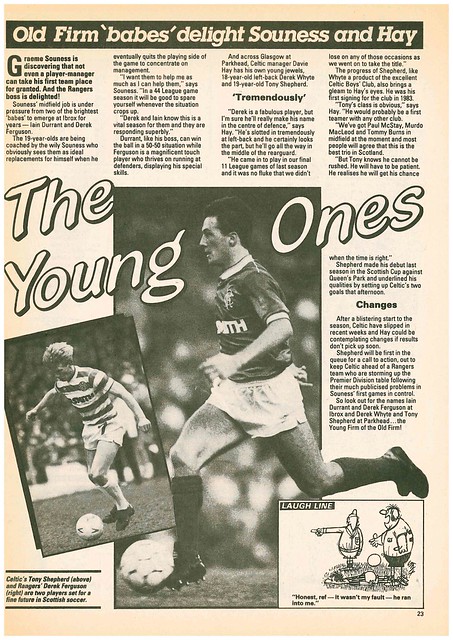 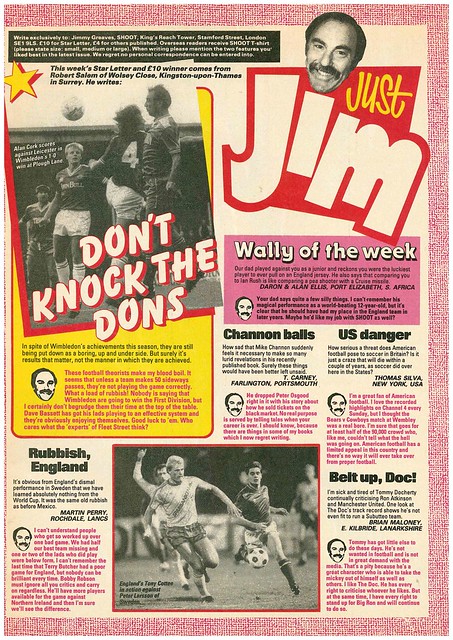 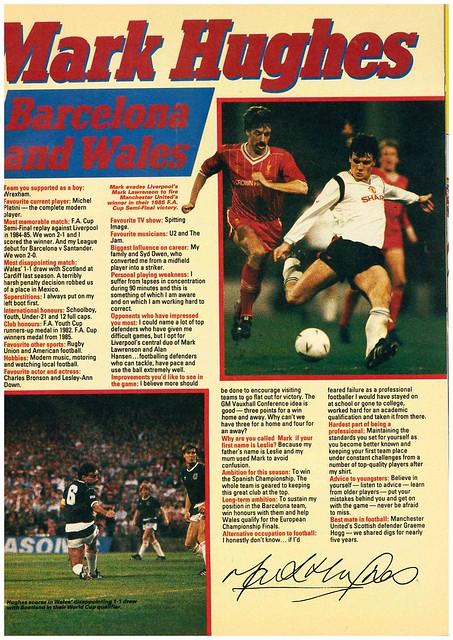 We are now in the summer of 1992 as Ray Houghton, soon to be sold to Aston Villa is the cover star of Match.

The page 3 star of this episode has long, flowing black hair …….. Darren Peacock.

Darren Peacock is being honoured as the player of the 1991/1992 season based on the average ratings in Match Facts with an average rating of 7.51 from 38 games.

Bizarrely, the clubs who finished in the Top Three that season (Leeds United, Manchester United, Sheffield Wednesday) didn’t have a player in the Top Ten.

A readers poll gives readers the chance to nominate their two centre-backs in England’s team for the 1994 World cup finals.

Bit of a pity that England failed to qualify.

Incidentally, alan Kernaghan did get to play in the 1994 World Cup …….. for the Republic Of Ireland.

In rumours that look a bit silly now : Arsenal want to sign Geoff Thomas and Keith Curle, Chelsea want to do a swap deal with Manchester United for Andy Townsend, Everton want to sign Duncan Ferguson from Dundee United (well, they did, but from Rangers two years later)

In actual news, Bristol City sign unknown Arsenal forward Andrew Cole for £500,000. Two and a half years later, he is Britain’s most expensive footballer.