I’ll save you all the usual boring cliches about what a year it’s been and go straight to the chart.

Congratulations to Taylor Swift, a two time winner having won it in 2012. I know you’re all eager to see if she’ll win it again in 2032.

If you haven’t heard the winning song, the video is embedded below.

And if you wish to look at archive charts, i’ve listed all the previous winners below.

After spending most of 2018 touring to promote his third solo album Who Built The Moon?, Noel Gallagher headed into Belfast, a city that he has a lot of history with.

Of course, he was at The Limelight (with 250,000 others) on the night Definitely Maybe went to number one, he has also been here on the weeks of previous album releases both solo and as a member of Oasis.

This album had an even bigger link to Belfast, with part of it being recorded here.

Noel Gallagher spending time in Belfast and I didn’t see him once, yet somehow I always manage to walk past Uncle Andy from Give My Head Peace at least once a week.

Support came from Baxter Dury, who sings a lot like his dad. If that’s your scene, you will enjoy him.

I would have preferred it if Blossoms were supporting him, as they did when he toured Mainland Europe last month, having previously seen them supporting Paul Weller in 2015 and Kasabian (well, supposed to) in 2017, as well as a headline gig at The Limelight in early 2017.

No pressure on Noel, but I was missing Linfield v Glentoran for this. As Noel entered the stage, Linfield had just gone 2-0 up. Noel was well on the way to being my favourite Gallagher as I missed a County Antrim Shield defeat to Ards to see Liam in concert last November.

I had a quick check again two songs in and it was 2-2 en route to a 3-4 defeat. It was now Noel’s job to cheer me up rather than entertain me.

Unsurprisingly, he entered to the sound of Fort Knox, a great introductory song with an epic build up with a 1990 vibe. You could just imagine it being in the background as you hug Tony Wilson or Peter Hook in The Hacienda.

Noel was on vocals for the “Hey hey hey” bits which didn’t really work as well live as it did on the record.

This then led in to Holy Mountain, the lead single from Who Built The Moon?, a song that took a while to grow, best described as Roxy Music with flutes. Amazingly, it works.

Everybody in the venue was punching the air as Noel sang “She fell, she fell, right under my spell”, as is tradition when you reach the chorus of a Glam Rock stomper.

The opening songs were dominated by songs from Who Built The Moon? It has it’s moments, but it’s weird enough to scare off teenage parka wearing fuckwits who previously turned up at his concerts acting like shitebags, meaning that this was a more civilised affair.

One of those songs was It’s A Beautiful World, which was the opposite of Fort Knox, which sounds a lot better live than it does on record.

This block of solo hits also included stuff from previous albums such as In The Heat Of The Moment, Riverman, Ballad Of The Mighty I, IF I Had A Gun and Dream On.

Three albums in, he can fill out a set with solo material, Oasis classics are now the minority. The his now Noel properly solo, or Noelo, if you prepare.

Noel then spoke to the crowd asking “What about ye?” in a very authentic Belfast accent, asking what had happened since he was last here, answering himself with “Fuck all”, as someone threw a baseball hat at him, he took a look at it and kicked it away in disgust, before asking “Who the fuck walks around Belfast wearing a Los Angeles baseball hat?” before making another fashion based observation that judging by the way people were dressed, there were a lot of Oasis fans in the building.

That got a cheer, it was a nice link to a couple of Oasis classics, Little By Little (sounding far better than on record) and The Importance Of Being Idle before Love Is The Law, and underrated classic from Who Built The Moon?

Another stand out track from Who Built The Moon?, She Taught Me To Fly was next. Just before that song, he introduced his backing band, The High Flying Birds. The loudest cheer was for Charlotte Scissor Queen, as this was the song she plays scissors on. There were also familiar (Familiar to millions, you could say) faces in the form of former Oasai Gem Archer, Chris Sharrock and Mike Rowe.

It was then back to Oasis for some singalong classics, Half The World Away and Wonderwall, before signing off on AKA …. What a Life.

Onto the encore, and an Oasis classic not usually performed by Noel, as it was sung by Liam, Go Let It Out, with a slightly more Primal Scream-ey vibe and no Noel shouting “PICK UP THE BASS” between verses.

That was then followed by a stripped back Don’t Look Back In Anger, Noel as per usual just letting the audience do the singing.

The show ended with a cover of All You Need Is Love. Oasis did covers of I Am The Walrus and Helter Skelter as B-Sides and frequently talked about their love of The Beatles.

Unfortunately, we didn’t get the balloon drop that has happened at other concerts on the tour when he performs this song.

Want to feel old? Definitely Maybe is the mid point between now and The Beatles splitting up.

As he left the stage, he told the crowd “I’ll see you down the road”

Whatever could be mean?

1. AJR ft Rivers Cuomo – Sober Up
2. Florence and the Machine – Hunger
3. Noel Gallagher’s High Flying Birds – All You Need Is Love
4. Arctic Monkeys – Four Out Of Five
5. Manic Street Preachers – Hold Me Like A Heaven

First of all, apologies for there being no Friday Five last week. It was due to a combination of packing for a weekend away and recovering from Noel Gallagher.

That meant I didn’t get to do a Eurovision chart. Better late than never, here’s a chart to get you in the mood for Israel in May 2019. 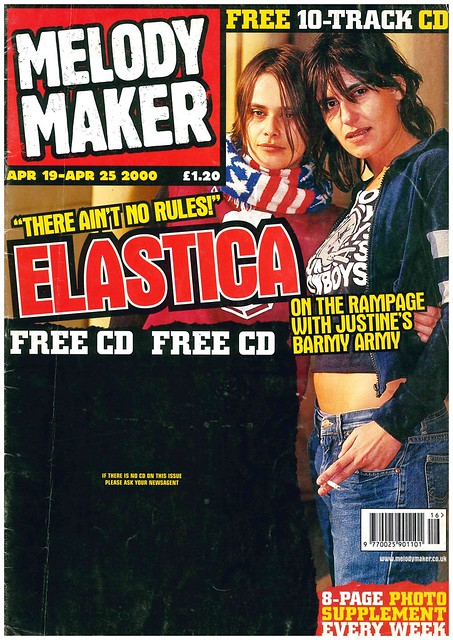 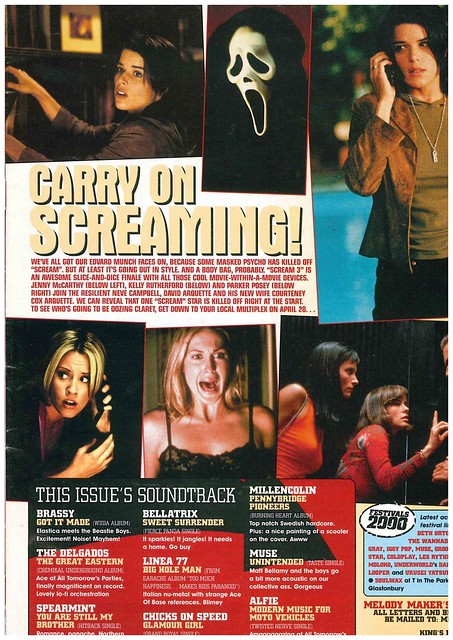 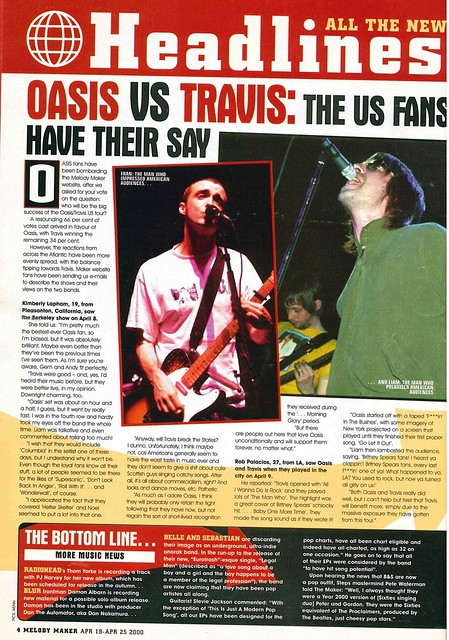 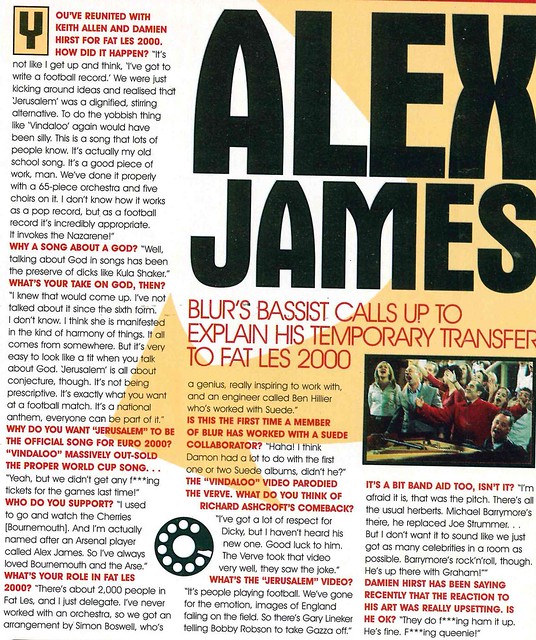 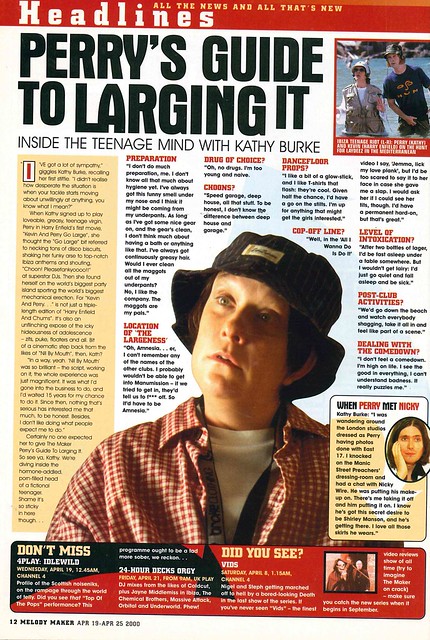 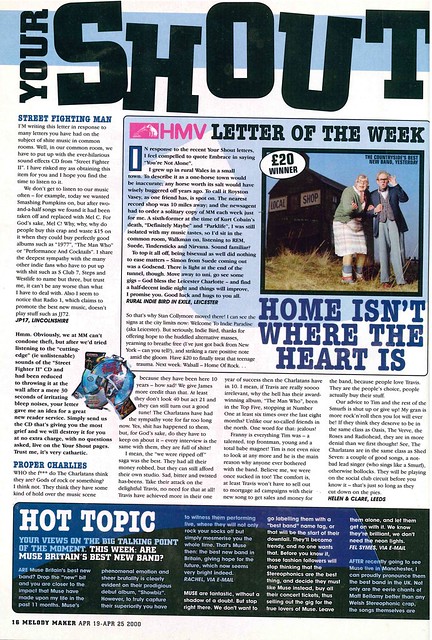 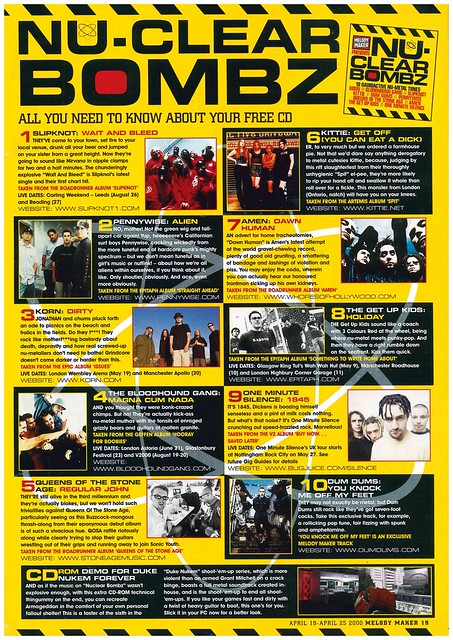 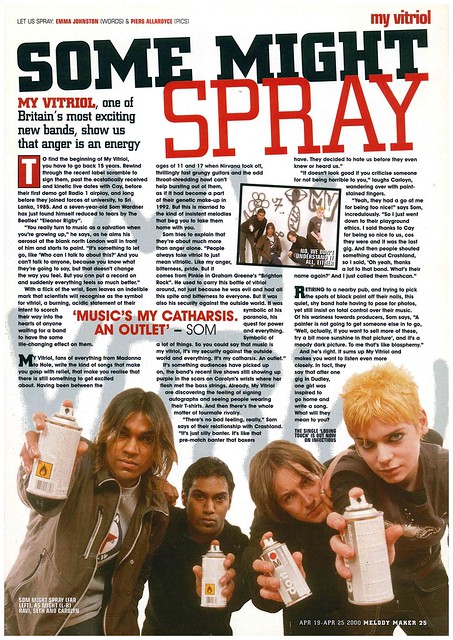 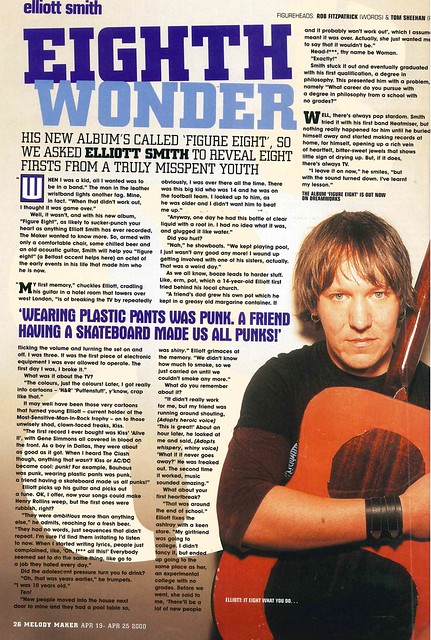 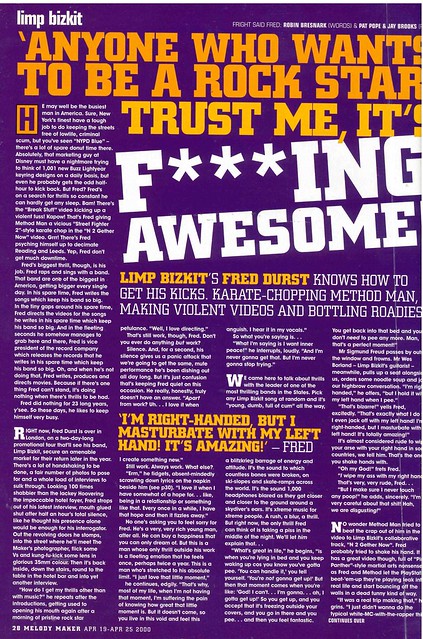 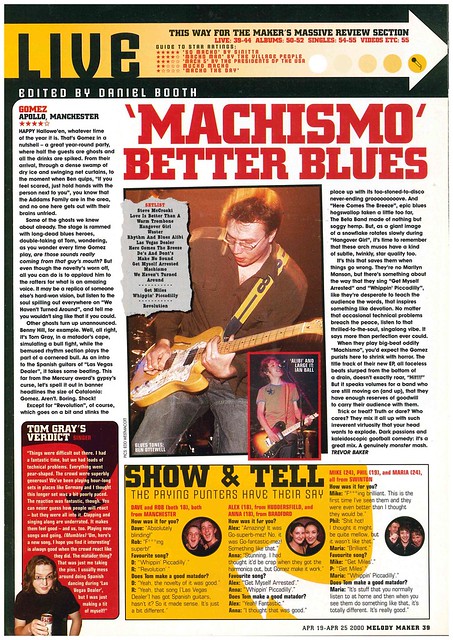 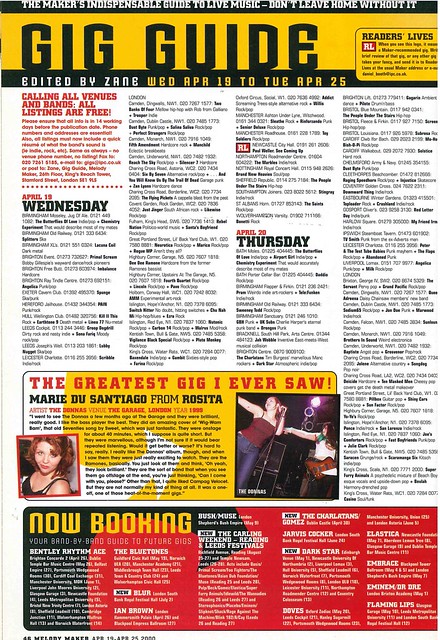 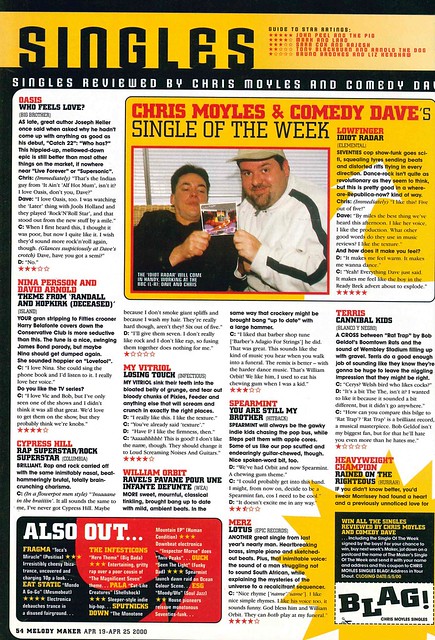 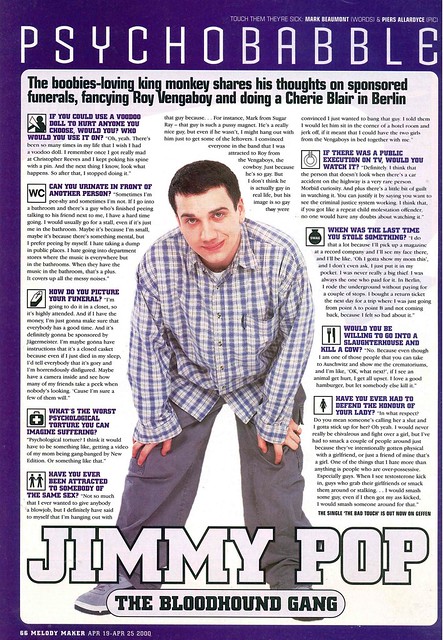 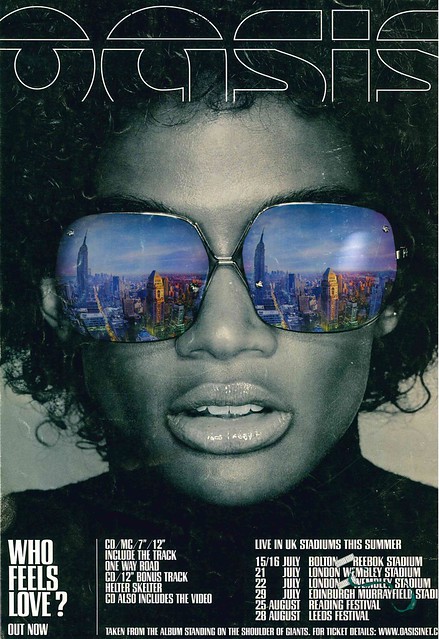 I’m very pleased to report that Liam Gallagher’s album is decent. Only 17 more days until he is in Belfast. As you were.

This week is a bumper bonanza of concert announcements of acts I like coming to Belfast in 2018. My bank account is going to take a beating ……. and then I have two family birthdays this week as well.

I’ve already got a Noel Gallagher ticket on presale, now i’m getting primed to get tickets for Stereophonics and Paloma Faith. Wish me luck.

Here’s some charts to get you in the mood.

Also, Monday is Phil Oakey’s birthday on Monday. I’m having a bit of a Human League thing at the moment, mainly due to the Top Of The Pops repeats on BBC Four. Sometimes it’s easy to forget how good a band is.

I’m really regretting not seeing The Human League when they’ve been to Belfast in recent years.

Liam Gallagher is the cover star of this edition of Melody Maker, as Oasis face what is described as a “Do or die” period for their career in America.

Noel Gallagher is fuming with his brother Liam for going on a “lost weekend” with Huey from Fun Lovin Criminals.

Mark Williams of The Fast Show is interviewed ahead of the release of Fast Football, a spin-off video starring Ron Manager, revealing himself to be a season ticket holder at Brighton.

There is also an interview with Charlotte Hatherley of Ash, taking up three pages.

Discussing their obsessions this week was Roddy Woomble from Idlewild.

Oasis are on tour in America, showcasing their new line-up in Philadelphia.

In posters, you could get one of Rick Witter dressed up as John Travolta in Saturday Night Fever.

Stereophonics gig in Glasgow gets reviewed, only getting one and a half stars out of five.

Nine Inch Nails gig in London got four and a half stars out of five.

Fun Lovin Criminals give their single of the week award to Baby It’s Cold Outside by Tom Jones and Cherys Matthews.

Shirley Manson of Garbage is the subject of a Q and A, revealing that she has a fear of exams. 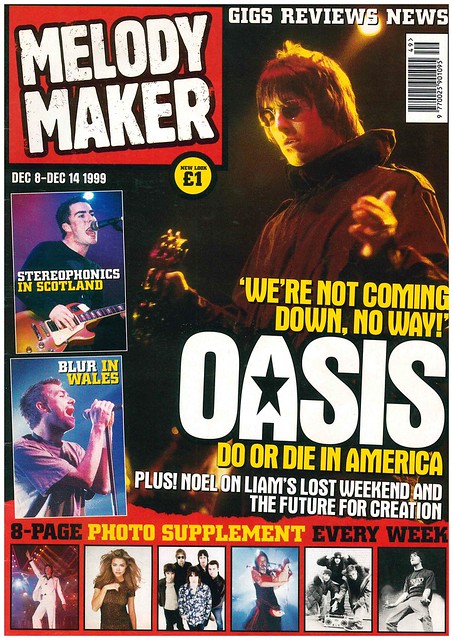 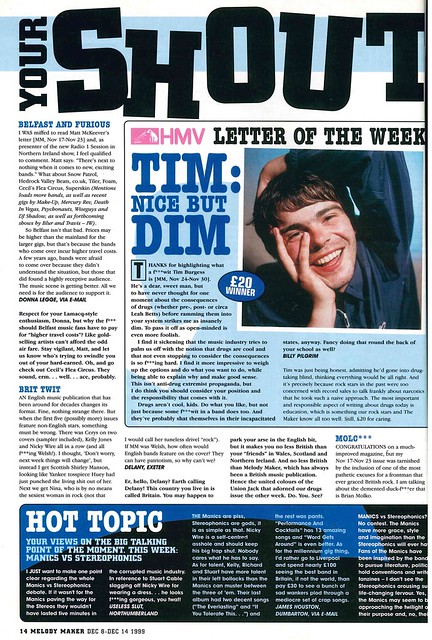 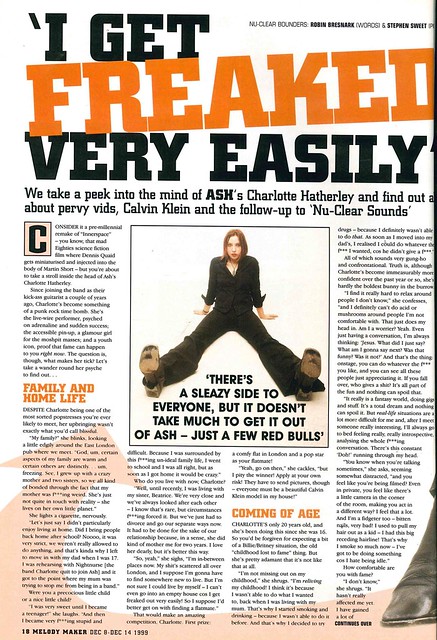 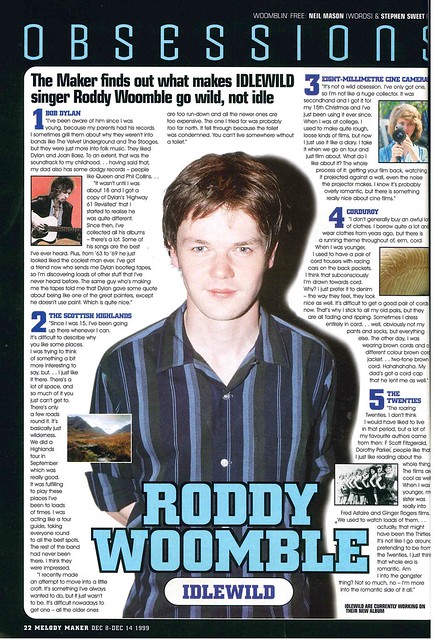 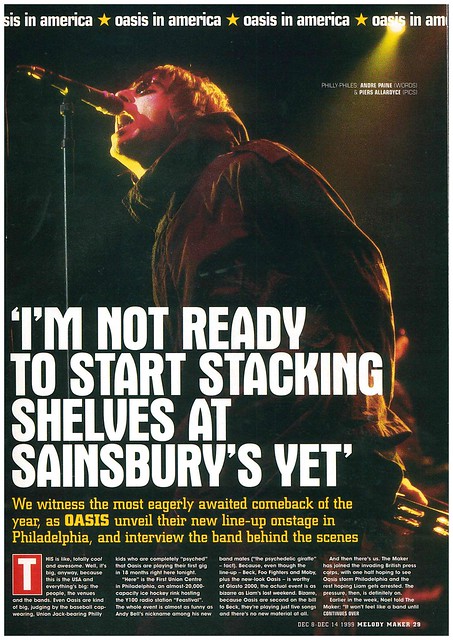 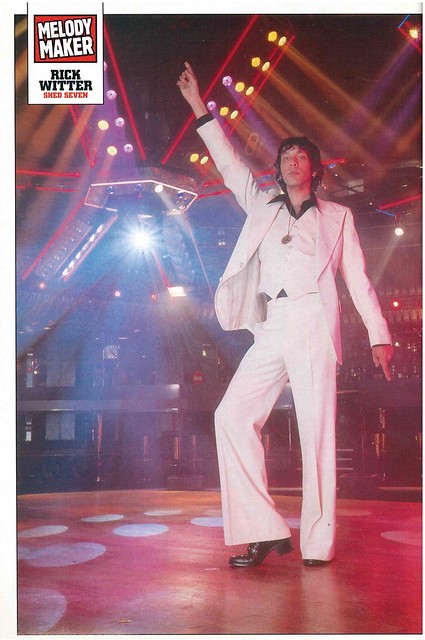 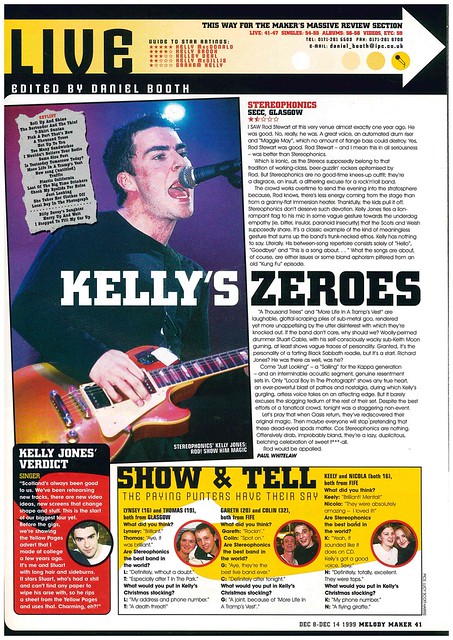 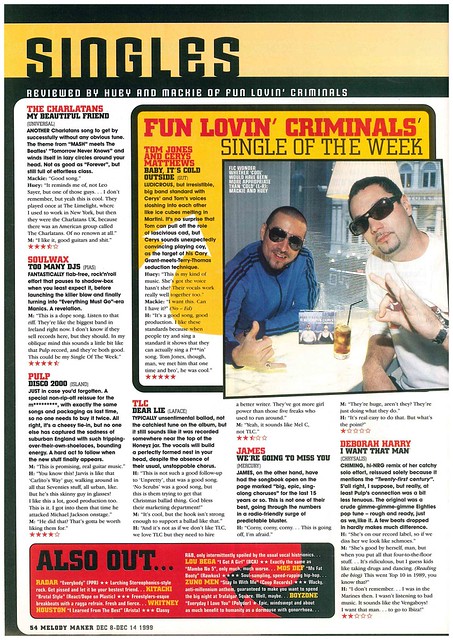 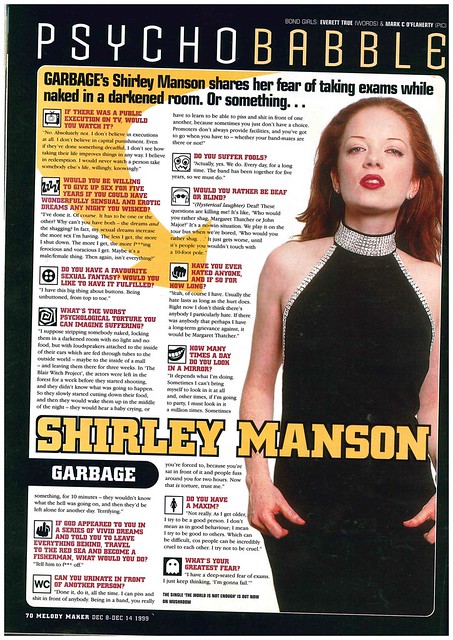