It’s the mid 90s, and Italian football can be found on Channel 4 on a Sunday afternoon. Such is the popularity, that it now has it’s own magazine. Gianfranco Zola of Parma is the main cover star, as Football Italia visits him at home.

Fabrizio Ravanelli and Alessandro Del Piero get a three page feature, described as “Juve’s Twins”, having formed a striking partnership as Juventus aim for a treble of Coppa Italia, Serie A and UEFA Cup.

Such as been Ravanelli’s form, he became the first Italian player to score five goals in a European club game, having done so against CSKA Moscow earlier that season.

“He’s a real star” says Ravanelli of his strike partner, adding “He’ll be leading Juve into the next century”

He was right, Del Piero was at Juventus, staying at the club until twelve years into the next century.

Such was the norm in the 90s was AC Milan picking up a trophy. Their latest one was the European Super Cup, won after a 2-0 aggregate win over Arsenal. This gets a double page spread.

There is a double page spread looking at the run-in to the season, and it’s all about two clubs, Juventus and Parma, aiming to win a treble of Serie A, Coppa Italia and UEFA Cup.

As Football Italia was published every three months, there was a four page look back at what had happened since the last edition was published.

Japanese clubs were rumoured to be trying to tempt Roberto Baggio away from Juventus, while Faustino Asprill was in trouble in his native Colombia after firing off a gun in public to celebrate the festivities. Another player in trouble was Walter Zenga, who has been given a driving ban for speeding.

Inter Milan are lining up a £20m double bid for Eric Cantona and Paul Ince, despite Cantona being in trouble in England for kung-fu kicking a Crystal Palace fan.

Milan’s match against Genoa is abandoned when news emerged of a Genoa fan being stabbed to death by a Milan fan. The following weekend’s games were postponed as a mark of respect.

Sampdoria manager Sven Goran Eriksson’s future is in doubt, with former Samp player Trevor Francis, in charge at Sheffield Wednesday, being linked with a return to the club as manager.

Anglo-Italian relations that month saw a Endsleigh League XI take on a Serie B select in Bari, with the English side winning 3-2.

Juventus want to sign Mario Basler while Parma have cooled their interest in Luis Figo of Sporting Lisbon.

Paul Gascoigne hopes to return from injury in April, sporting a new slim look after giving up beer.

All three European competitions get a round-up, with Italian clubs in the semi-final stage of all three.

In big transfer news, Paul Elliott signs for Channel 4 as a pundit, having played for Pisa in the 1980s.

When asked who the next British player to go to Italy will be, Brady goes with Matt Le Tissier, How suggests Alan Shearer or Stan Collymore. Souness also goes for Alan Shearer while Joe Jordan suggests Ryan Giggs. Ray Wilkins says none, that the gravy train was over.

None of those players suggested played in Serie A.

There are three pages looking at foreign players in Serie A, looking at the lack of German players.

Talking of foreigners in Serie A, the two English players playing in the league, David Platt and Paul Gascoigne get a full page profile.

Daniele Massaro gets a treble page profile, as he is now a key player in Milan’s team as his 34th birthday approaches.

In further Anglo-Italian news, the Anglo-Italian Cup gets a three page review of this season’s competition, won by Notts County, beating Ascoli in the final at Wembley. 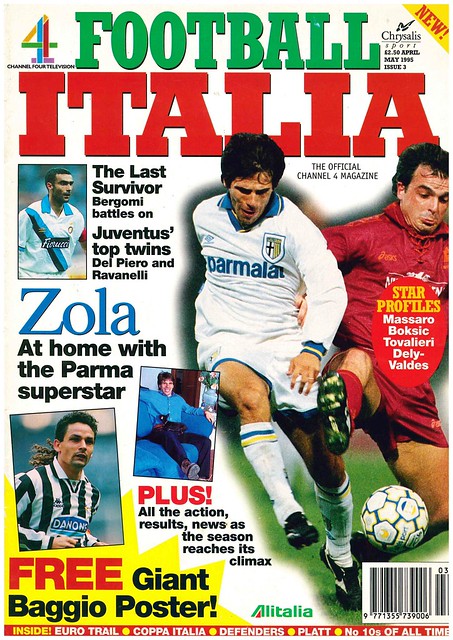 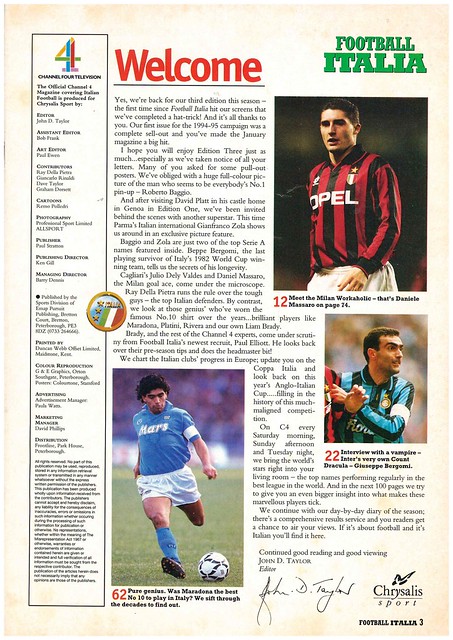 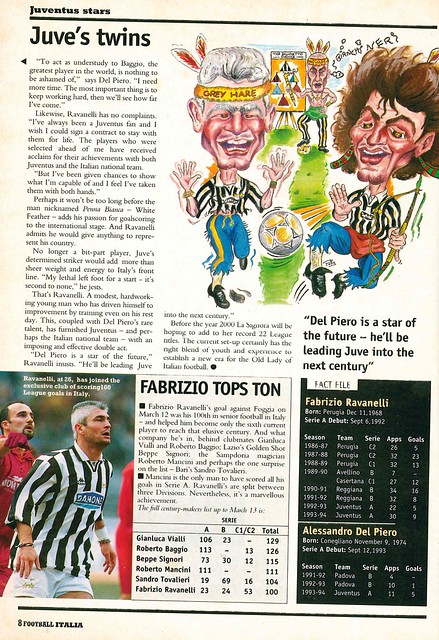 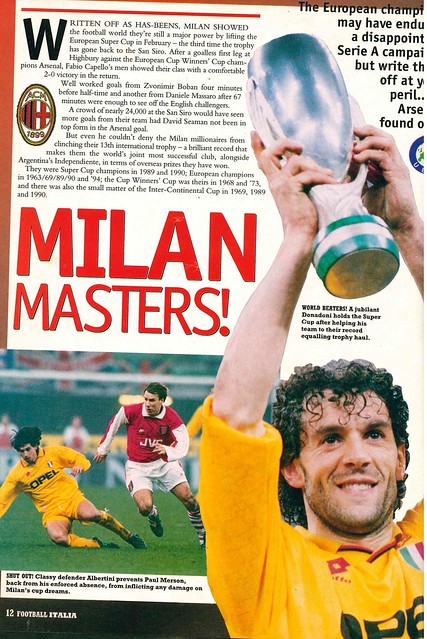 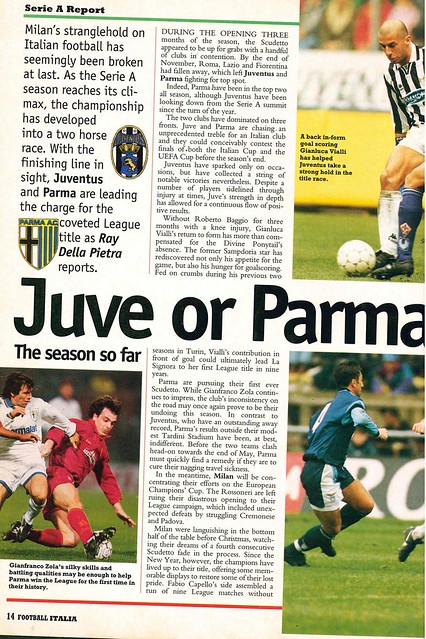 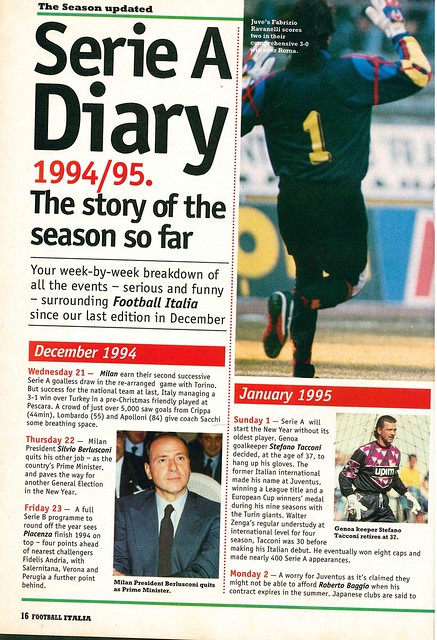 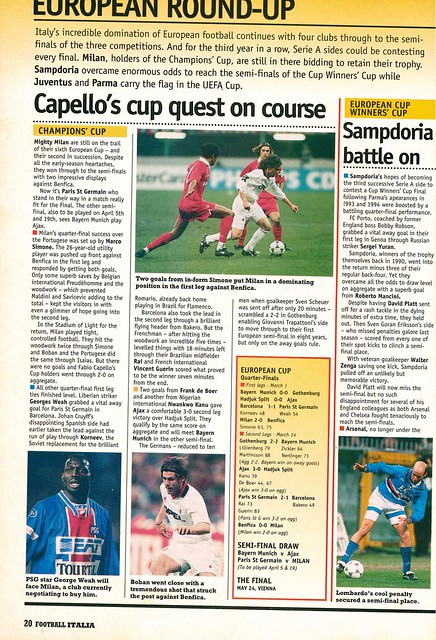 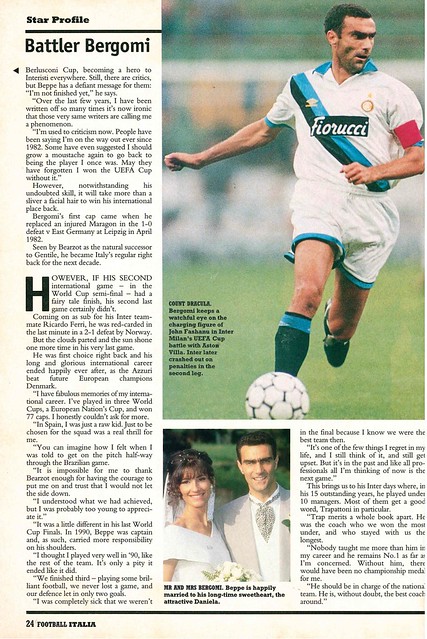 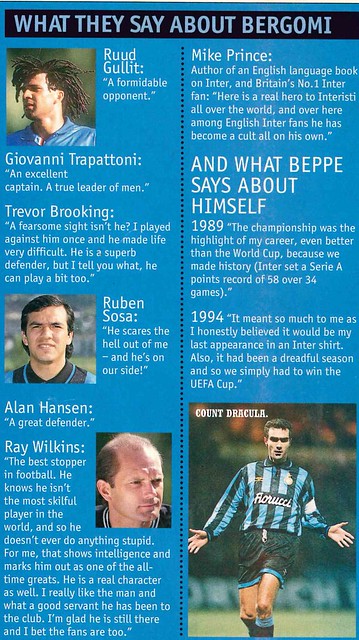 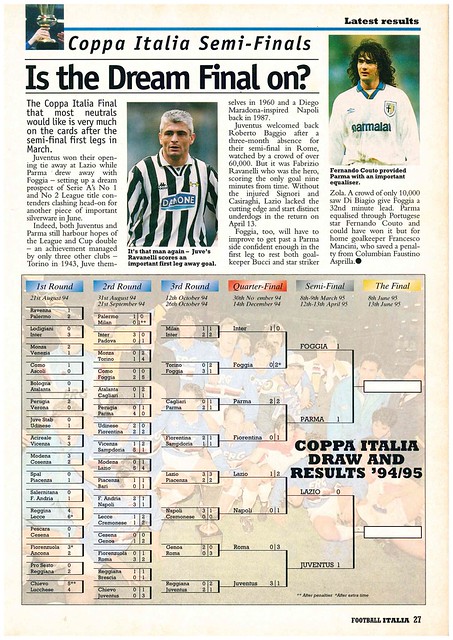 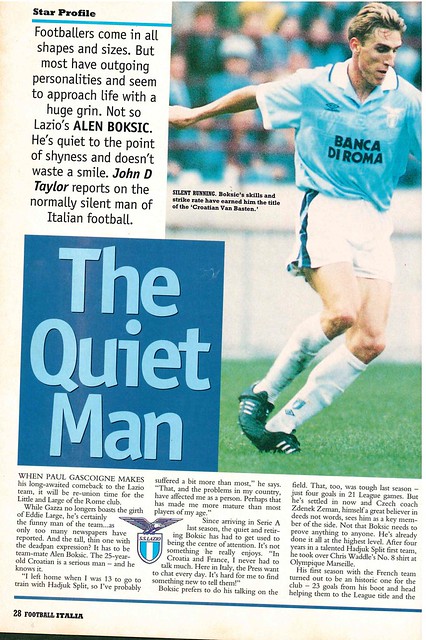 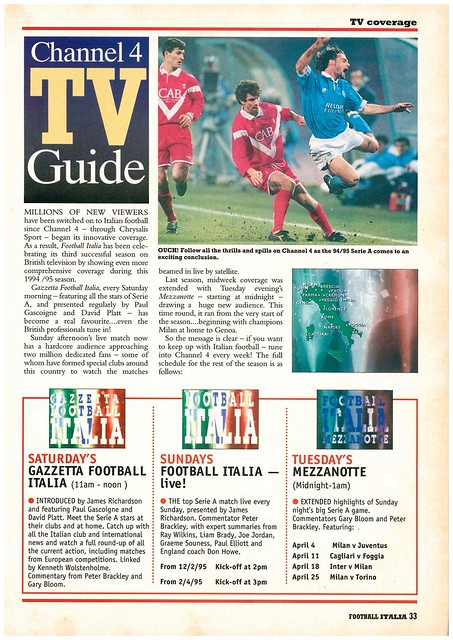 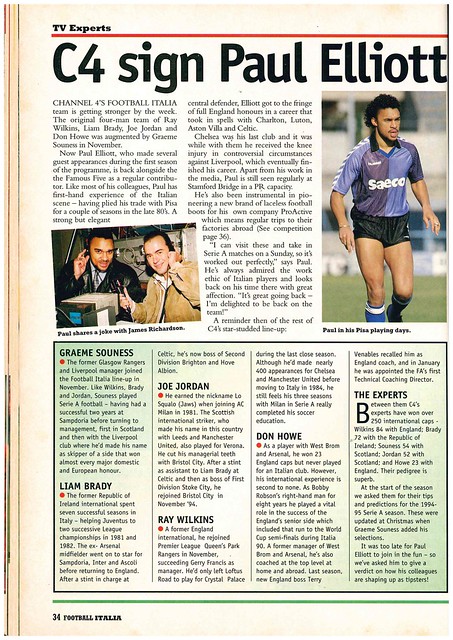 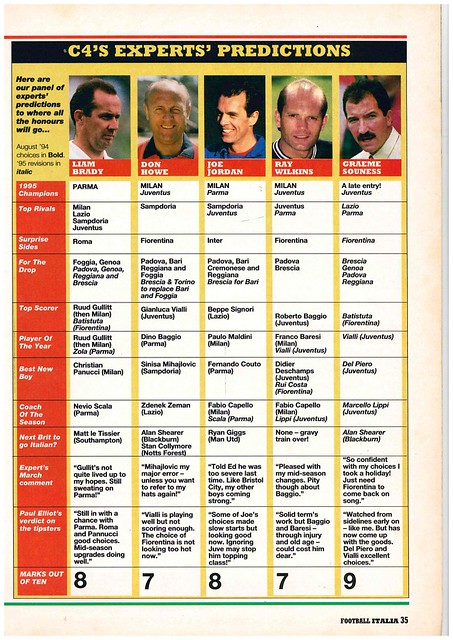 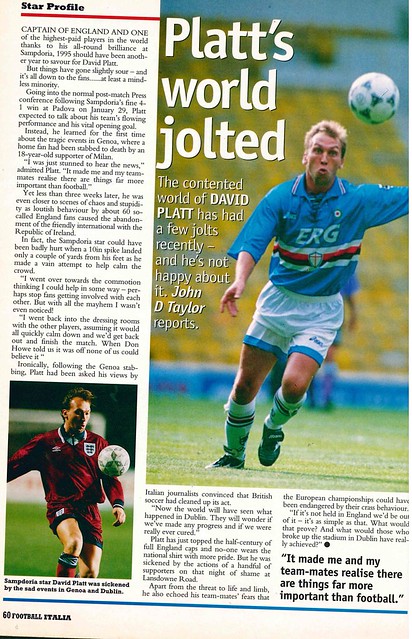 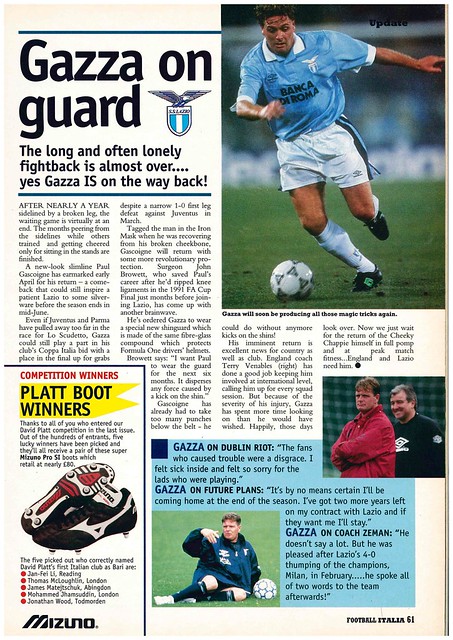 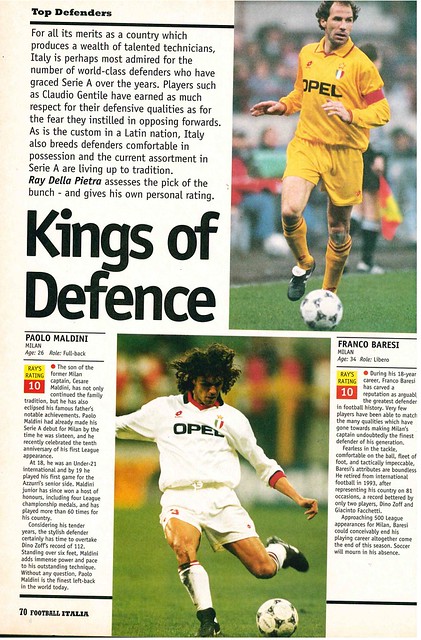 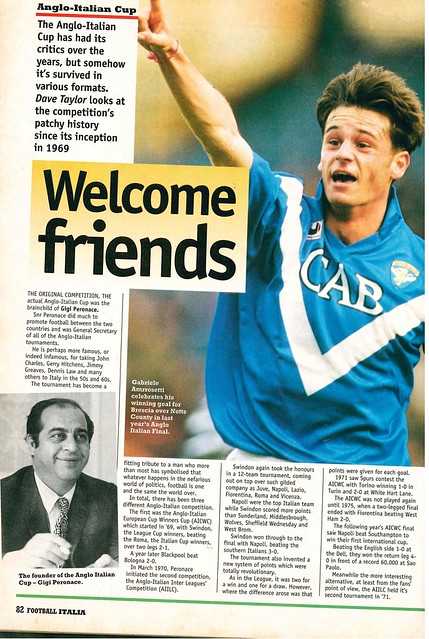 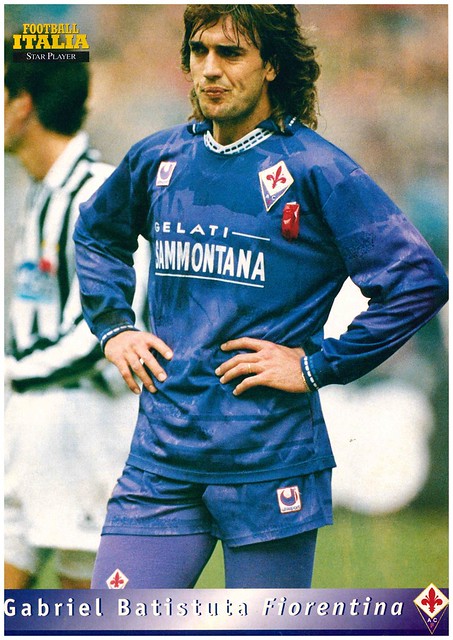 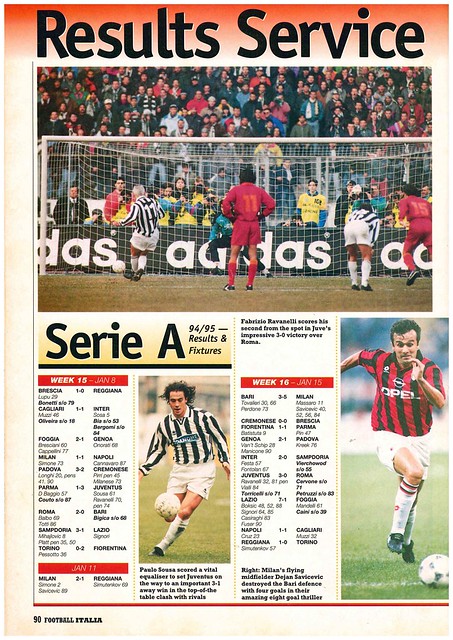 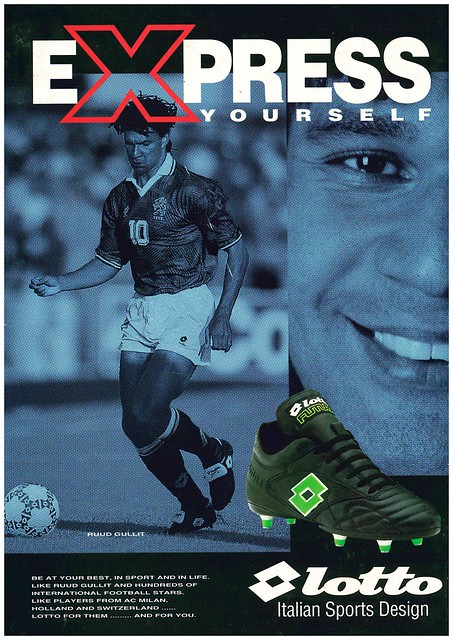 In this edition, it’s a special edition ahead of the 5th Round of the FA Cup, with Chelsea’s Paul Elliott the cover star.

On page 3, Gary Lineker is declared “Britain’s best striker” winning a vote against Ally McCoist by 64% to 36%

Though, as the poll didn’t include Martin McGaughey, I declare it to be flawed.

A double page spread is dedicated to asking top flight right-backs who is better, Lee Sharpe or Ryan Giggs?

The result is a draw, with Norwich City’s Welsh international Dave Philips unsurprisingly voting for his fellow countryman Giggs.

In actual news, unknown Frenchman Eric Cantona rejects the offer of an extended trial at Sheffield Wednesday to sign for Leeds United instead. He didn’t stay at Elland Road for very long.

There’s an exclusive interview with Thomas Berthold, whose 5 match ban for violent conduct against Wales would see him miss out on the whole of Euro 92.

We are now in the summer of 1992 as Ray Houghton, soon to be sold to Aston Villa is the cover star of Match.

The page 3 star of this episode has long, flowing black hair …….. Darren Peacock.

Darren Peacock is being honoured as the player of the 1991/1992 season based on the average ratings in Match Facts with an average rating of 7.51 from 38 games.

Bizarrely, the clubs who finished in the Top Three that season (Leeds United, Manchester United, Sheffield Wednesday) didn’t have a player in the Top Ten.

A readers poll gives readers the chance to nominate their two centre-backs in England’s team for the 1994 World cup finals.

Bit of a pity that England failed to qualify.

Incidentally, alan Kernaghan did get to play in the 1994 World Cup …….. for the Republic Of Ireland.

In rumours that look a bit silly now : Arsenal want to sign Geoff Thomas and Keith Curle, Chelsea want to do a swap deal with Manchester United for Andy Townsend, Everton want to sign Duncan Ferguson from Dundee United (well, they did, but from Rangers two years later)

In actual news, Bristol City sign unknown Arsenal forward Andrew Cole for £500,000. Two and a half years later, he is Britain’s most expensive footballer.