Nina Persson of The Cardigans, or Nina Cardigan as she has been dubbed, is the cover star of this week’s edition of Melody Maker, having been dubbed “The Sexiest Woman In Rock”

In other news, Ian Brown has made a comeback gig at Conway Hall in London, performing a cover of Billie Jean by Michael Jackson during the encore.

Oasis and Blur are also in news, with Blur subject to a South Bank Show special, while Oasis have announced Andy Bell of Hurricane #1 as a new member.

Blur were among the winners at the MTV Awards in Dublin, an event which gets covered by Melody Maker.

Skin from Skunk Anansie gets asked about the forthcoming new Oasis album, and she describes herself as being “intersted” in hearing it.

Mark McKeever won the letter of the week for e-mailing in to complain about how crap the music scene in Belfast is.

Cover star Nina Persson gets a double page interview, stating that the majority of her fans are female.

There are two pages dedicated to 1993, as Melody Maker looks back at the 90s, during the decade’s final days.

Brian Molko gets interviewed as Placebo are busy recording their third album.

Jonathan Davis of Korn talks about his five obsessions, one of which is playing a bagpipe.

In reviews, Melody Maker went to see Eminem, Red Hot Chili Peppers and Badly Drawn Boy in concert, though not at the same time.

Rick Witter of Shed Seven is subject to a Q and A, revealing that he would watch a public execution if it was broadcast on TV.

If you wanted, there was a lyrics sheet for So Low, Ocean Colour Scene’s new single.

In gigs, James (with support from Cast), Ian Brown and Shed Seven were going on tour in the coming weeks. 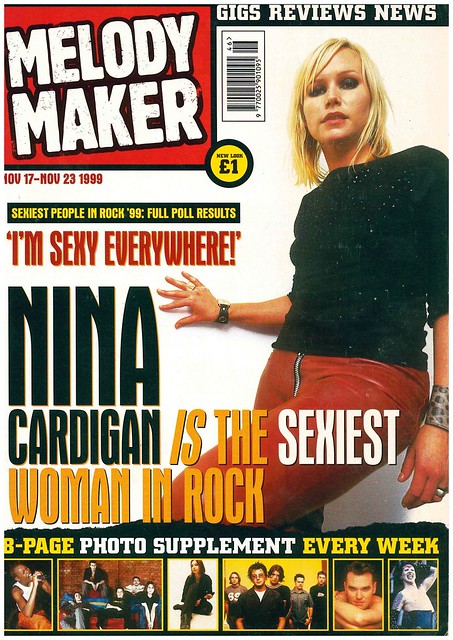 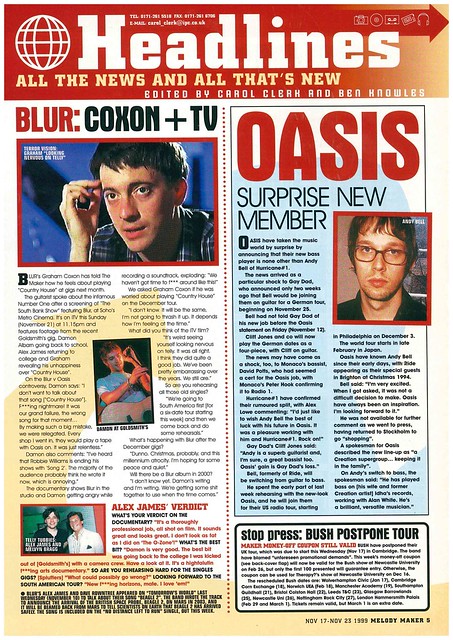 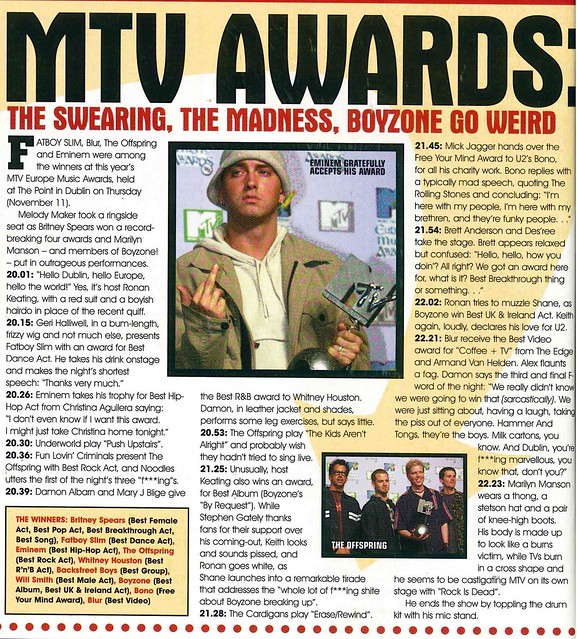 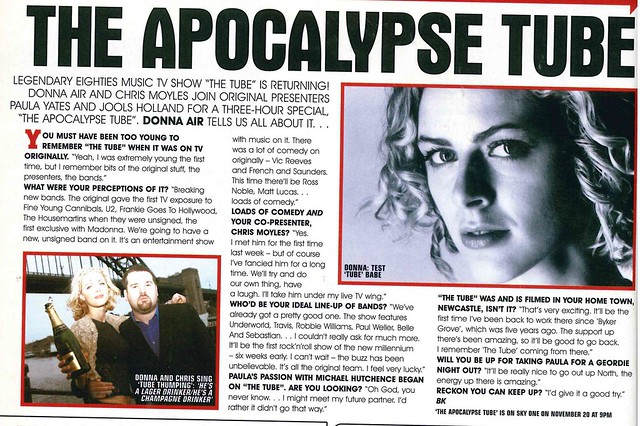 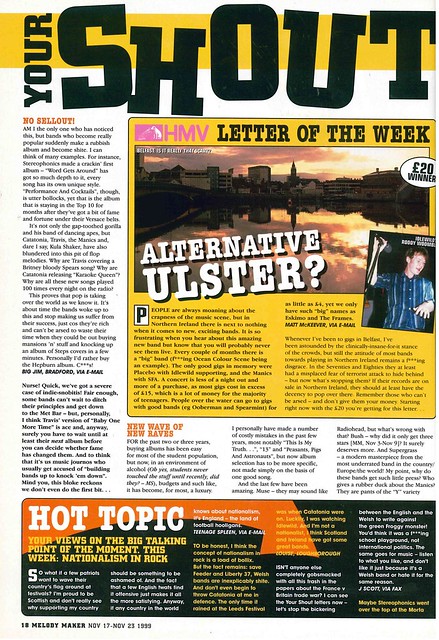 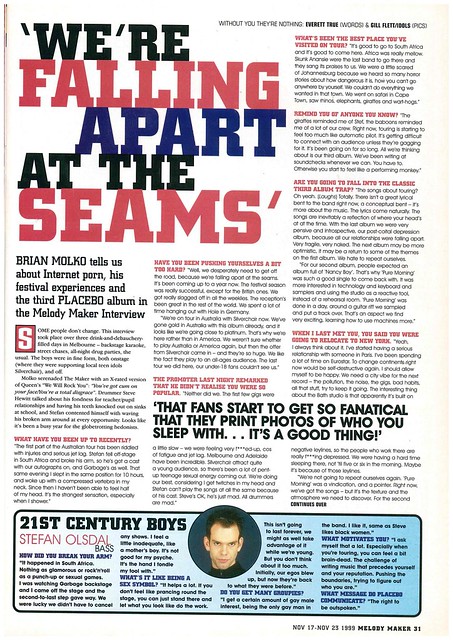 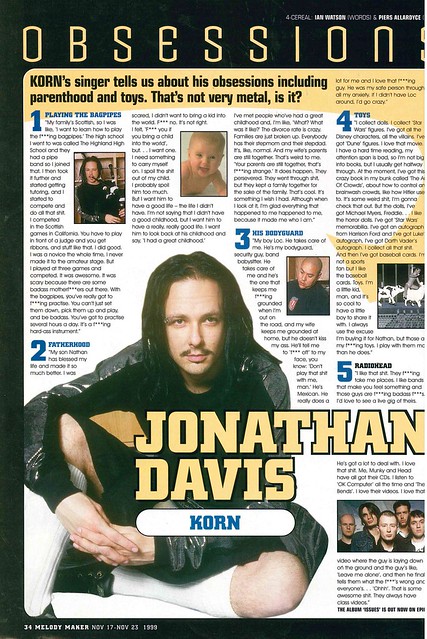 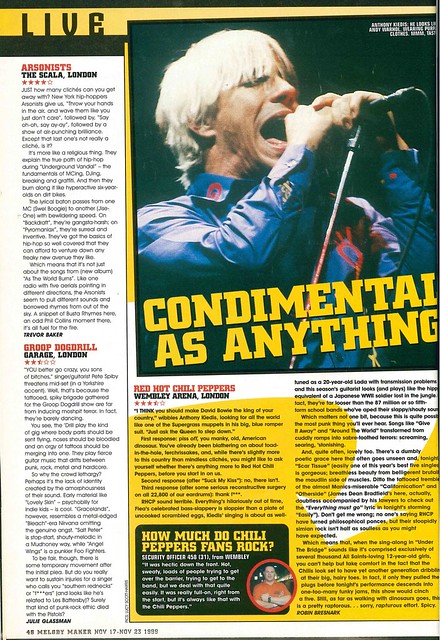 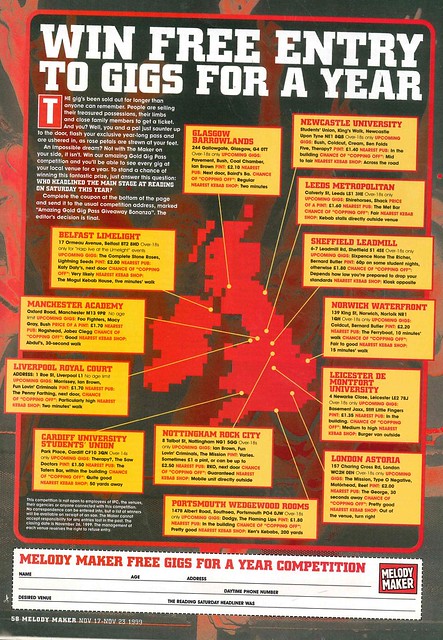 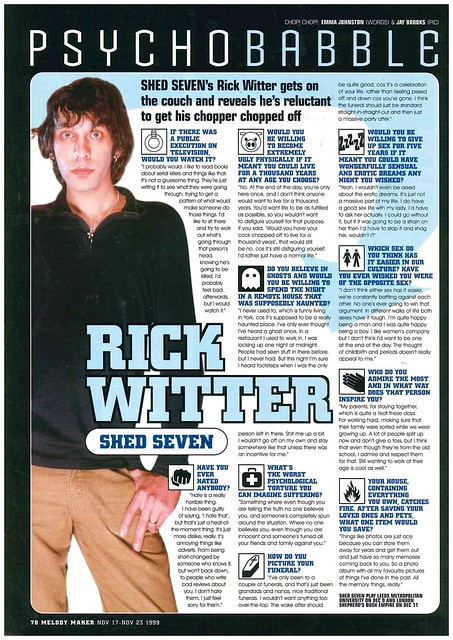 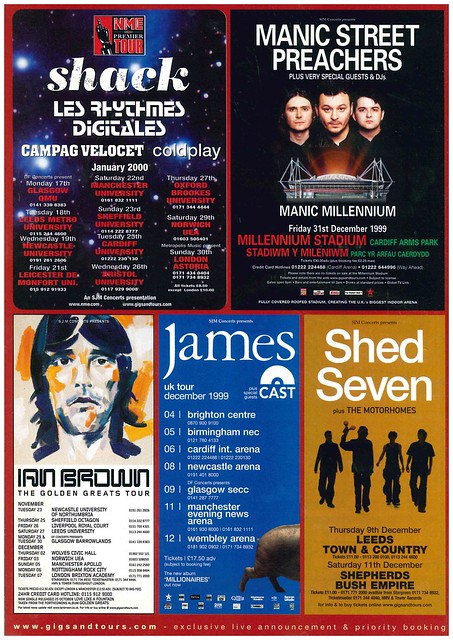 1. The Courteeners – No One Will Ever Replace Us
2. One Republic – Kids
3. Kasabian – Comeback Kid
4. Placebo – Jesus Son
5. Daughtry – Come Undone

This week saw the announcement that Coldplay will be doing a concert at Croke Park in the Summer of 2017. I’m going to admit something really uncool ……. I like Coldplay. Well, their singles, I can’t really be arsed listening to any of their albums in full.

I’m undecided if i’m going. If you are, here’s five songs to get you in the mood.

Forgot to comment on it last week, but Two Door Cinema Club announced a tour for January with no Belfast gig. That can mean one of three things.

1 and 3 sound quite tempting.

Christmas is almost upon us, so here’s some TOTP classics to warm you up.

Rick Buckler of The Jam isn’t far from 60 this week.

And Peter Buck of REM isn’t too far behind him.

And now, time for some Ace Of Base

While Nicole Appleton hits the big 40 this week.

Jim Morrison would have been 71 this week. Not sure what he would have made of this.

Remember the bald guy that used to be in Duran Duran when all the Taylors left? It’s his birthday this week.(Although he had hair during this performance)

And going in a completely different direction, here’s some Placebo.

And finally, a tribute to Mozart, much love popular entertainer, who died this week in 1791.