Before I wrap up the 2015-2016, it’s time for my favourite photos. Hopefully, you’ll agree. Feel free to vote for your favourite.

Taken at my very first game, back on 27th June 2015, I like the composition and framing of this.

Taken on my first visit to Taylor’s Avenue, I love how everyone is focused on the player with the ball (I think it’s Guy Bates)

Taken at Ballinamallard in September. I don’t know why I love this photo, I just do.

I was taking a photo of the corner, but this guy just got up and started to encourage Linfield players, which made the photo for me.

A photo of just the corner kick would actually have been boring.

Taken on that famous night against Greece just after Davis first goal, and trying to capture what it meant.

No filtering or magic tricks, that’s what the sky was like when Linfield travelled to Ballymena in December. Just had to get a snap.

Taken after the Irish Cup tie at Solitude in March, what it means to win at a ground you haven’t won for four years, and to do so in a convincing manner.

Taken at Dalymount Park, terracing that isn’t used anymore, other than to hang flags on. I like the composition of this.

I was on a day trip to Dublin in late June, so I took advantage of the teatime kick-off and close location.

It was a bottom of the table clash, and it was unsurprisingly tense, as Bray managed to dig out a 1-0 win.

Towards the end of the following week, was my first Linfield match of the season, a UEFA Cup tie against NSI Runavik.

I’d have to wait three weeks for my next Linfield match, the 2nd leg of the 2nd Round tie against Spartak Trnava, which Linfield lost 3-1, and 5-2 on aggregate.

England were the only unbeaten team in European qualification, and Bryan Robson uses his column to compliment the players who helped England get there, such as Gary Stevens, Paul Bracewell and suggests that Peter Barnes could be a long shot for the squad.

Shoot gives a double page photo spread to Pat Jennings and his saves that secured Northern Ireland the draw at Wembley they needed to qualify.

Terry Butcher will be a key man for England in Mexico, and gets a double page spread as he returns from injury, aiming to keep Ipswich in the top flight.

Alan Ball is the subject of a new series where Shoot collates quotes about a famous footballing figure, where former team-mat Gordon West reveals that defeat makes him cry.

Shoot’s editorial appeals to UEFA to allow English clubs back into Europe, after a season in exile as a result of the Heysel Disaster.

As well as Bryan Robson, Peter Reid jumps on the Paul Bracewell bandwagon, praising him in his column.

Linfield get a feature as they aim to win their 5th successive title in what is their centenary season, despite the absence of Martin McGaughey through injury.

Jimmy Greaves Letters Page has a letter suggesting that England’s 0-0 draw with Northern Ireland was fixed, but Greaves disputes this by praising Northern Ireland, who narrowly lost to England in Belfast and beat Romania home and away.

In news, Aston Villa are in danger of losing their shirt sponsorship deal with Mita Copiers as a result of the TV blackout due to a dispute with broadcasters, while the FAI and Sligo Rovers denied a claim by Leicester City player Steve Lynex that he was run out of town by a gunman when on trial at Sligo.

Mark Hughes offered tickets to a 12 year old Sheffield Wednesday fan to their visit to Old Trafford later in the season, after he was hit by a ball that Hughes hit into a crowd when the sides met at Hillsbrough.

Les Sealey had his car stolen, but what he wants back the most is his shin pads, which he has worn throughout his career and views them as lucky.

Aberdeen get a team profile, where talk of a Clean Sweep of Scottish trophies has been banned, according to Willie Miller.

In foreign news, Brazil’s older players such as Socrates, Zico and Falcao are worried that Mario Zagallo will axe them for the World Cup if he is appointed manager. Derry City’s crowds of 7,000 are the biggest in the League Of Ireland, while San Marino are applying for membership to FIFA and UEFA, and hope to enter the qualifiers for the 1990 World Cup.

David Williams of Norwich City gets a feature, having taken the unusual step of quitting as Bristol Rovers manager (He was a 30 year old player/manager) to become a player at Norwich City.

Mark Falco gets a feature, after having to fight off competition to gain a place in Tottenham Hotspur’s starting team.

Franz Carr of Nottingham Forest has made such an impression, that Bobby Robson has marked him as one of England’s stars of the 1990 World Cup. No pressure on him, as Shoot bills him “The new George Best”

Charlie Nicholas uses his column to cheerlead for Steve Williams, his Arsenal team-mate to be in the England squad.

Shoot does a feature on Charlton Athletic, aiming for promotion to the top flight, despite having to play their home matches at Selhurst Park.

Frank McAvennie is the subject of this week’s “Focus On ….” where he reveals his favourite bands are U2 and Queen. 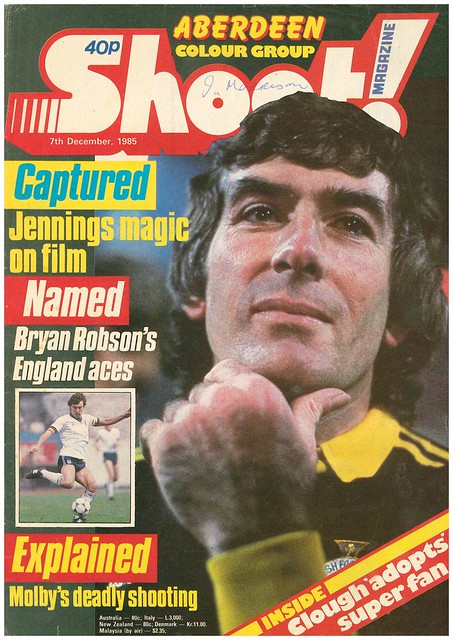 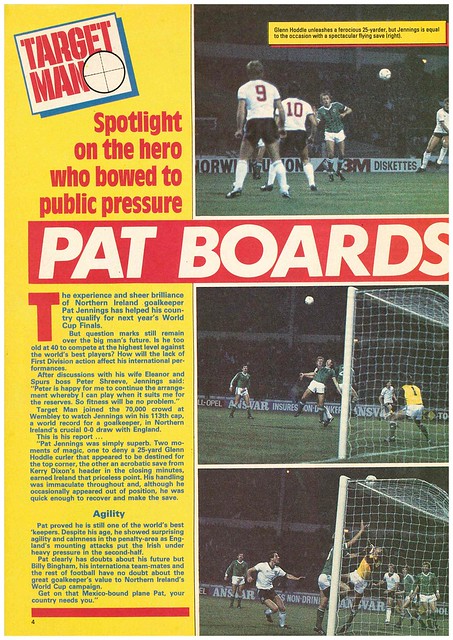 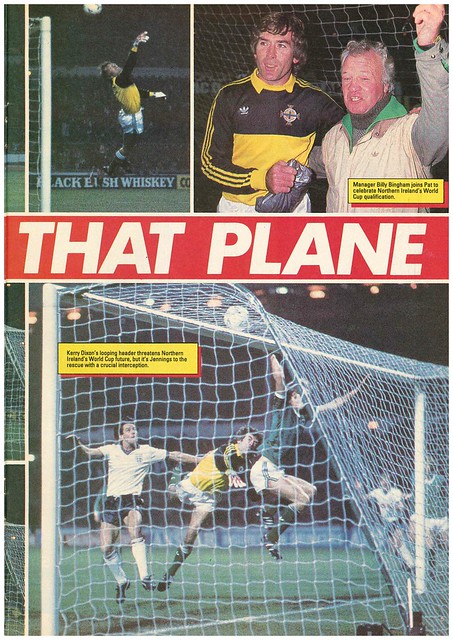 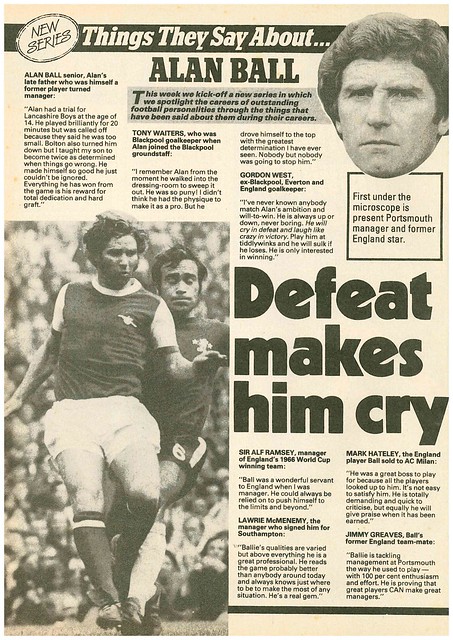 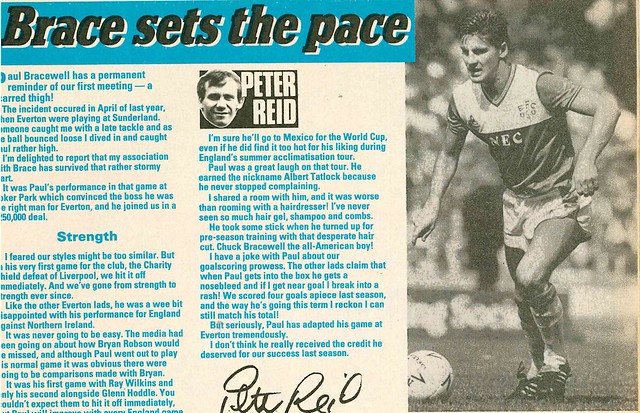 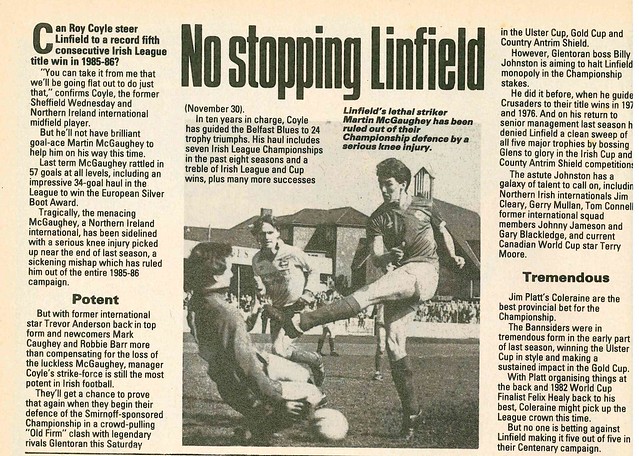 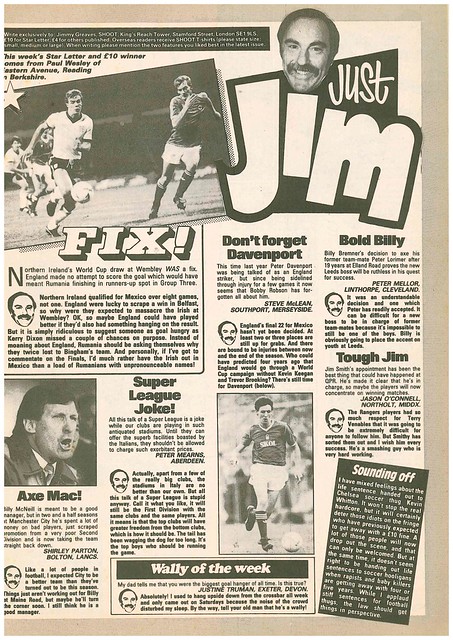 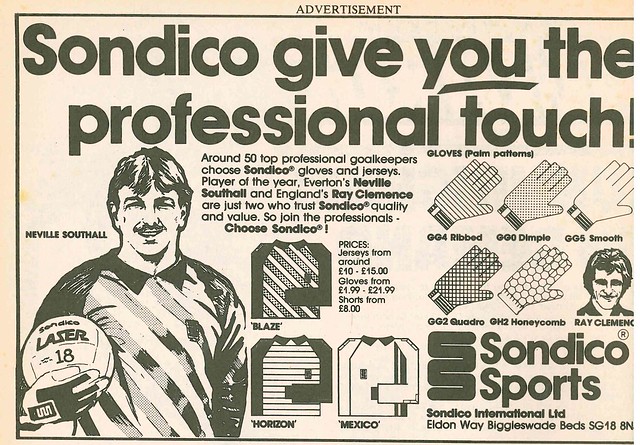 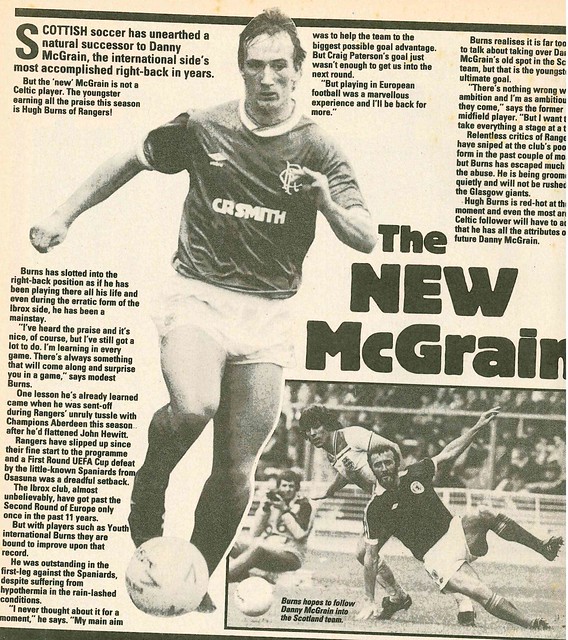 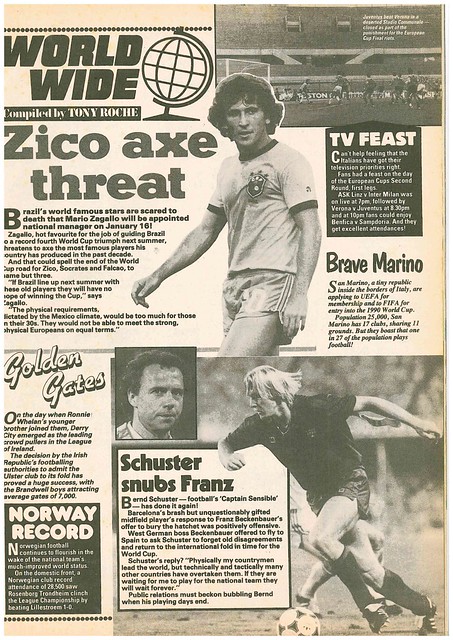 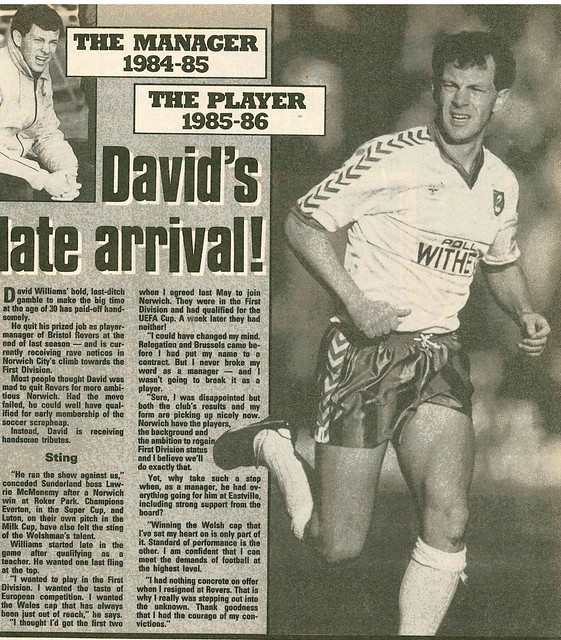 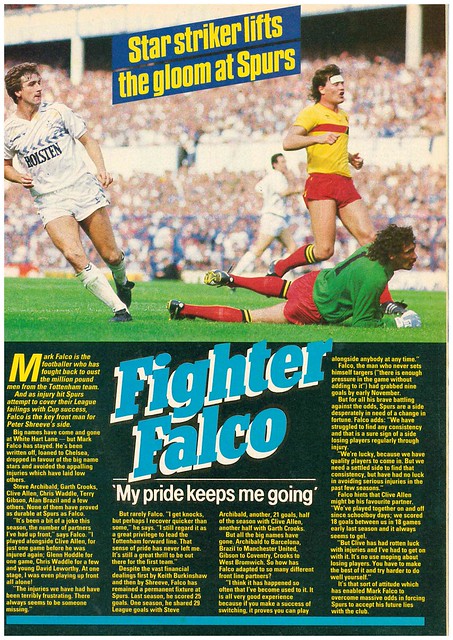 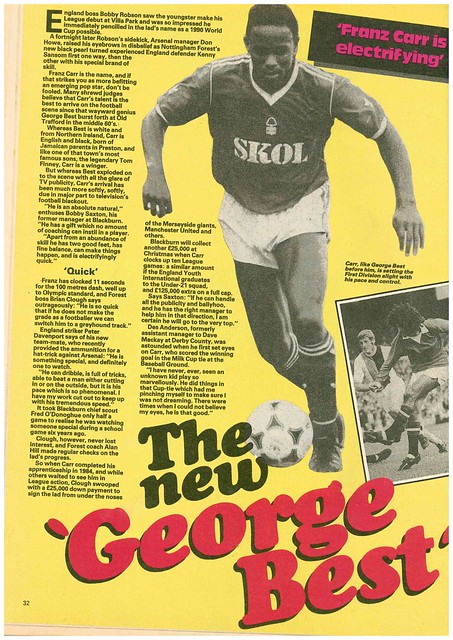 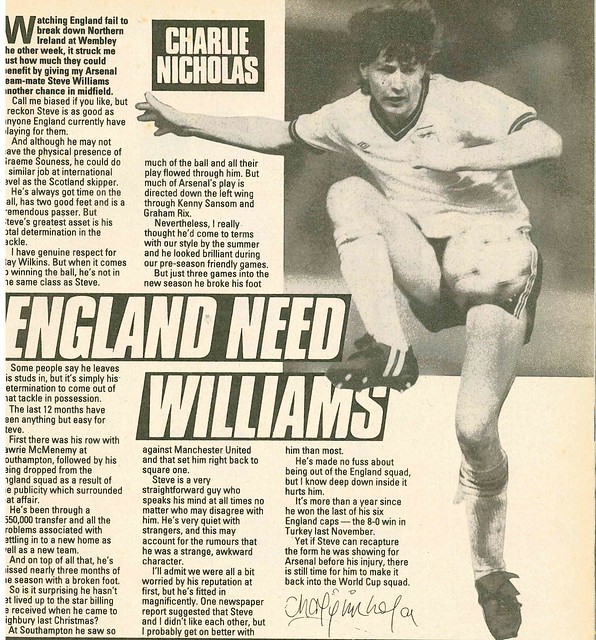 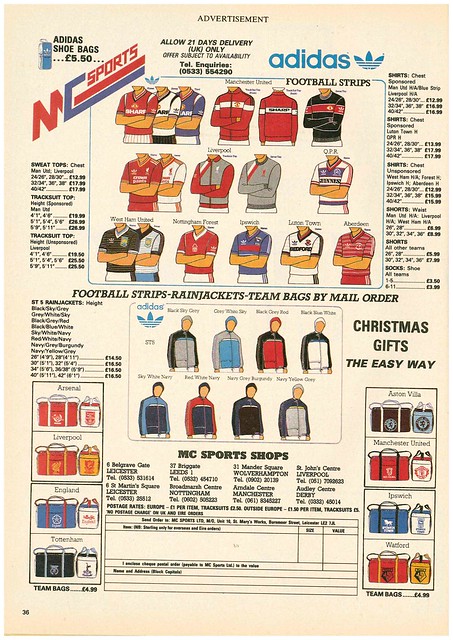 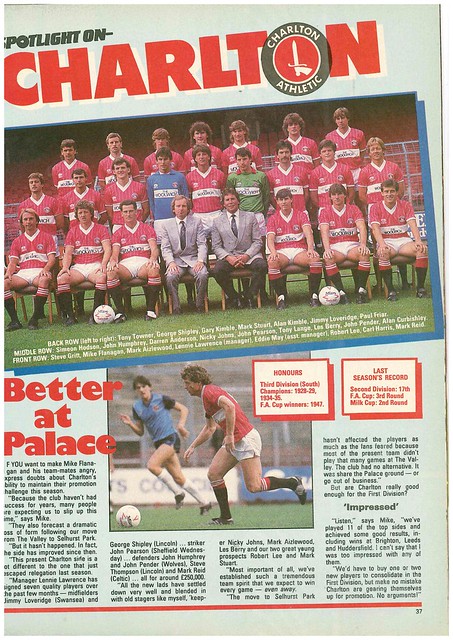 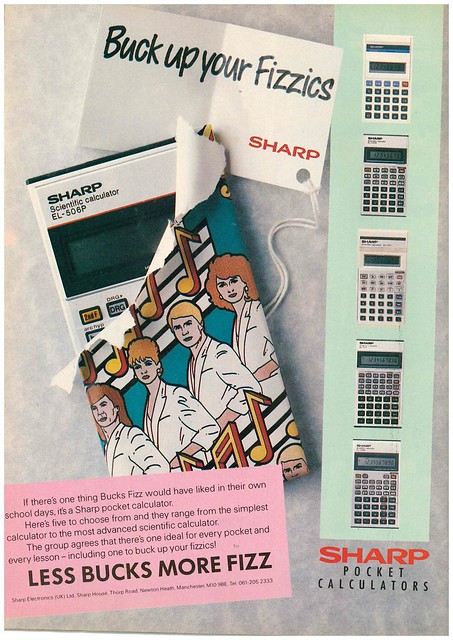 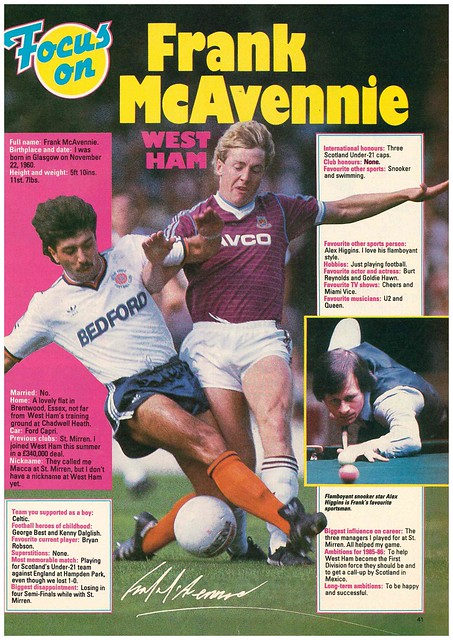 My football watching for 2015 is now over, so, it’s time for a statistical look back at the football I watched.

Red Cards : 10 (Doesn’t include Caoimhin Bonner being sent-off in the tunnel after the game)

No real curiousities, other than a match with kick-off delayed for an hour due to the weather

June 2015 began in Crewe, but only briefly, as I was on an 8.35am train bound for Liverpool, to spend a day in the city having been at Northern Ireland’s match at Gresty Road the day before.

While in Liverpool, I managed to spot some Street Art and get some photos.

In the middle of the month, my last football match of 2014-2015, as Northern Ireland took on Romania in a European Championship Qualifier, my first game in the newly rebuilt Railway Stand at Windsor Park, which was fast tracked to be open for that game due to problems with The Kop

The month ended with a day trip to Dublin. Naturally, there were Street Art photos.

That, was my photo adventures for June.

I was in Dublin for the day, and as Bray were at home, it would have been rude not to head to the Carlisle Grounds, on the DART line right beside a station.

Curiously, the 2014-2015 season also began for me at Carlisle Grounds. Like when I visited last season, Bray were struggling at the bottom end of the table and were desperate for points.

Like Bray, I had also seen Sligo Rovers play before, in their case against Bohemians in 2009. Like Bray, the only time i’d seen Sligo play ended in defeat. One, or possibly both, losing runs were going to end.

Given both teams proximity to each other at the bottom of the table, they were both desperate to get the points on offer.

Sligo’s pre-match preparation was dominated by the future of manager Owen Heary, or lack of a future. For a brief period during the first-half, visiting Sligo fans sang songs in support of him, with Sligo issuing a statement that he has stepped down.

Bray had made a bright start to the game, having some pressure on Sligo’s goal, but it was Sligo who had the first chance of the game when a cross flashed across the box by Cretaro, but Armstrong was unable to finish.

Within minutes, Bray struck when a scramble resulted in Sullivan firing home from close range after a team-mate failed to do so when he should have scored.

Sligo responded by having possession and attempts on goal. They were just that. They stung the goalkeeper’s hands but they were saves the goalkeeper should be making.

After all those shot, ironically, Sligo almost equalised when a tackle went goalwards. They also had a shot cleared off the line from close range that should have been scored.

Bray were glad to hear the half-time whistle, to allow them a chance to regroup.

The second-half was poor to watch, it was a typical bottom of the table clash with both teams desperate for points. Both teams were feeling the pressure. Neither of them looked like scoring in the second-half. There was no belief that they would.

With each passing moment, Bray fans were starting to fear that they would concede a vital equaliser. As the minutes ticked down, Bray were able to smother the game and hold on to possession.

There were still nerves. A speculative shot from Bray went over with 30 seconds remaining, prompting groans from the crowd and an angry response from manager Trevor Croly.

Bray were able to see the game out and get the three points which saw them leapfrog Sligo into 10th, and 1 point behind Derry City, who are now being dragged into a relegation battle.

Bray play Limerick (12th) and Derry (9th) in their next two games and are hitting a run of form just in time for these.

Now that 2015-2016 is up and running, next up is Linfield v NSI Runavik in the UEFA Cup on Thursday night. Linfield’s friendly schedule offers a trip to Knockbreda at the end of the month, a new ground for me to visit.

Another ground that i’ll be visiting for the first time to see Linfield play will be Belfast Loughshore Hotel Arena, or Taylor’s Avenue, in old currency.

I’ve just booked a trip to Edinburgh for the Festival, but of course, i’ll be planning to take in a game. The game on while i’m there is Hearts v Partick. There’s also midweek games on in the League Cup, so hopefully, Hibs will be at home, or even a team easily commutable (Fife/Falkirk) that week.

With regards to Manchester United, i’m looking at Sunderland in September and Bournemouth in May, and possible some more.

Over the past couple of weeks, i’ve been removing photos from my computer hard-drive in order to make more space to make my computer run quicker.

Whilst doing this, I happened to stumble upon some photos that for some reason, I hadn’t uploaded.

The first match is a League of Ireland clash between Bohemians and Sligo Rovers in June 2009.

I was staying in Dublin that weekend to use it as a base to head on to Slane to see Oasis, and had a spare Friday night, so I decided to take in the only League Of Ireland game on that night.

Bohemians won the match, at Dalymount Park, 2-0. Bizarrely, they wore their White away strip at home, due to Sligo’s all Black away strip being judged by the referee to clash with Boh’s Red and Black stripes.

Got a good photo position and the late daylight also helped me. Enjoy

Can’t imagine being too many other lost treasures on my hard-drive, but if there is, i’ll post them up.