May 2019 began with a busy Bank Holiday Weekend, starting off by going to see Echo and the Bunnymen at Custom House Square, Ulster v Connacht at Ravenhill, and then checking out Street Art as part of Hit The North.

The following weekend, I headed to Manchester to see United take on Cardiff City. The less said about that match the better.

On the plus side, I did manage to get some Street Art photos from the city.

That was it. The first two weekends of the month were busy, the second two not so much.

Echo and the Bunnymen live at Custom House Square

It’s a bit grim when visiting Street Art in Stevenson Square is more exciting than going to Old Trafford.

Headed over to Manchester at the weekend for United’s match against Cardiff City, but I made sure to get some Street Art photos while I was there.

A regular visitor to the city, I automatically know where to go in pursuit of Street Art.

I was a bit late getting into the city on Saturday, heading straight to Stevenson Square in the Northern Quartet, a hotbed of Street Art.

Thanks to websites dedicated to Street Art in the city, as well as local media coverage, I knew there would be new pieces waiting for me.

One of them was a mural of someone called Arya Stark, who sounds like a German midfielder being linked with an English club this summer that Championship Manager experts on Twitter rate as the new Lothar Matthaus, but is actually someone from Game Of Thrones.

I haven’t a clue who she is, or was, as I don’t watch Game Of Thrones, but I am aware through media consumption that she died recently, and this was Manchester’s tribute to her.

Obviously, an hour away in Liverpool, the tribute would have been black armbands and a minute silence at Anfield. YNWA Arya.

It took ages to get a photo of it as there was a queue of people getting photos when I arrived.

Beside it, is one of Ian Brown.

There are other murals on the Northern Quarter, on the shutters of Vinyl Revival, and on a board to cover a building site on Thomas Street, as well as the usual pieces on Tibb Street.

Sunday was spent mopping up what I missed, focusing on Ancoats, and spotting a work in progress on Spear Street.

And then, it was off to Old Trafford. The less said about that the better.

As a post script, last week, BBC Newsline did a feature about Belfast Canvas, but unfortunately, I can’t find a video of it online.

Meanwhile, BBC NI’s website has a feature on Street Art in Derry. I’m planning on visiting the city some Saturday in June, so i’ll be keeping an eye out for anything I see. Keep an eye out for that.

And here we are, what you’ve been waiting for, to find out the best song of 2016. Not long to go until it is revealed. Are you ready? Are you ready?

Thank you for your support over the past year and I’ll hope to bring you more Friday Fives and pointless themed charts throughout 2017.

Hopefully, over the past four weeks, i’ve helped you discover some songs you’ve never heard before.

If you haven’t heard the winning song, here it is ……

Want to get excited for music in 2017? Here’s four words for you – Liam. Gallagher. Solo. Album.

It’s that time of year again, where we have reached the halfway point. So, as is tradition, it’s time to look back at the 50 best songs of the year so far.

Queen, having just released their latest album Innuendo, are the cover stars of Q, in the early months of a year that would see the death of their lead singer Freddie Mercury.

Tom Jones feels the wrath of Q in their monthly “Who the hell does …….” column.

In news, Stone Roses are in Wales, working on an album they hoped to release that Autumn. It was slightly delayed …….. until December 1994.

Q does a four page feature on the work of Showbiz journalists at The Sun, Daily Mirror and Daily Star. You may recognise The Sun’s man, a young Piers Morgan, who boasts that he earns as much money as the Prime Minister.

Queen get a five page feature, mainly an interview with Brian May, covering the furore over their appearance at Sun City, with May defending the band’s appearance “The audience was mixed, as was our hotel. We were able to speak against Apartheid in interviews and play with black musicians in Soweto”

May also spoke about their post Live Aid revival, their decline in America, and Ice Ice Baby, which featured a sample of Under Pressure, which May thought wouldn’t sell as he thought it was crap. 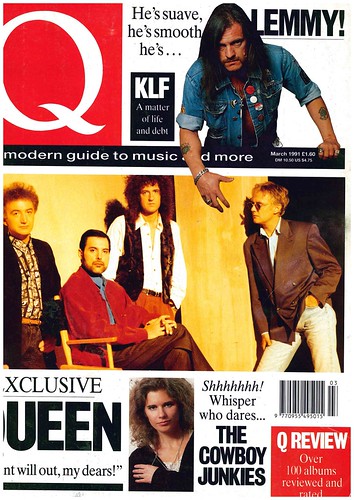 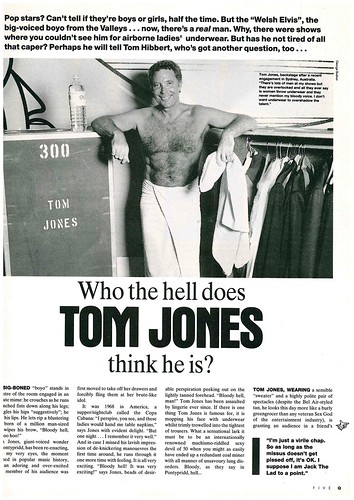 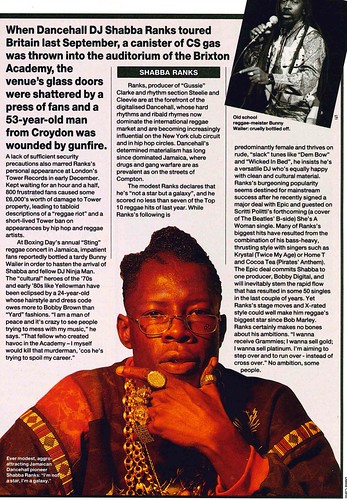 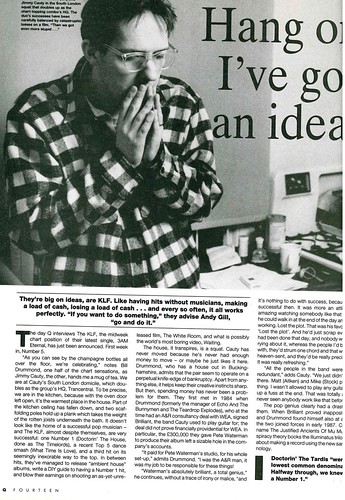 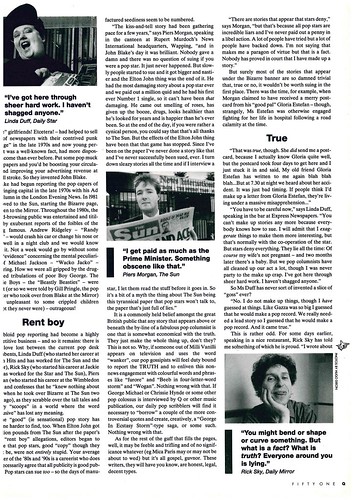 Not a lot of pop birthdays this week, but let’s get stuck into our weekly TOTP round-up.

Travis Barker from Blink 182 is another year closer to 40.

Incidentally, he shares a birthday with Faye from Steps, who, from next week, can be seen doing Panto in Belfast.

Anni-Frid from Superswedes (Actually, only three of them were Swedish, Anni-Frid is actually Norwegian) Abba (or Frida, as she’s more commonly known) turned 68 this week. ABBArasure anyone?

Mani from the Roses turned 52 this week.

And a Girls Aloud double birthday as both Sarah (17th November) and Kimberley (today) turn 33.

1. The Shins – Simple Song
2. Bruce Springsteen – We Take Care Of Our Own
3. Gotye – Somebody That I Used To Know
4. Dexy’s Midnight Runners – Jackie Wilson Said
5. Lloyd – Dedication To My Ex

As stated in a previous blog, I purchased Belsonic tickets for Madness and Two Door Cinema Club. Not going to lie, i’m pretty much excited about it.

This morning, I shall be desperately trying to get tickets for Noel Gallagher.

It’s great how much Belsonic has grown since it’s inception in 2008. I thought it was doing too much too soon, but it’s great to be proved wrong.

In honour, I shall do a Top Five for Belsonic and Tennent’s Vital.

With Oasis as the biggest band in Britain, Q has managed to get Noel Gallagher on the cover with the headline “THE GREATEST SONGWRITER OF THE 90s?”

Meanwhile, Mick Jagger is in the news after doing an online webchat with fans. Well worth getting dial-up for.

1995 was reviewed with most of the coverage focusing on the chart battles between Blur and Oasis.

Hope the Daily Express don’t find out about that last one.

Stone Roses get five pages dedicated to them, where Mani proclaims “We have the X-Factor”

Within six months, they had split up, before reforming in 2011.

Thus far, they have never appeared on an ITV talent show.

Noel Gallagher gets five pages dedicated to him. We wouldn’t have been happy if he looked at the album chart, as Oasis were number two behind Robson and Jerome.

John Lennon (The Beatles) and Freddie Mercury (Queen) make posthumous appearances in the top ten while Michael Jackson is at number nine, one place ahead of Pulp, which maybe inspired Jarvis Cocker to bare his arse at Jackson at that month’s Brit Awards.

Stuart Maconie’s round-up of the best of the (still fledgling) internet sees him review a Tina Turner fansite.

One of the greatest inventions of the modern era, and somebody is using it to show their love for Tina Turner.

The main features, however, were of Blur and REM. Guitarist Peter Buck comments “I Shudder to think that I might be playing in stadiums when i’m 51, like the Stones”

This month saw the launch of a column where musicians guest review singles. The honour of the very first one went to Andy Cairns, frontman of Therapy?

To celebrate the 50th edition, Vox asked 90s popstars for their review of the 90s so far, and what they thought would be on the cover of Vox in 2000 (Vox was actually wound up before then)

Noel Gallagher’s 2000 front cover is “OASIS – WHERE ARE THEY NOW?” – the answer would be, releasing their 4th album, while his hopes for the rest of the 90s would be for a second Stone Roses album, Man City to win a trophy and The Verve to do a gig on the moon.

Only one of those events happened, and it was the most far fetched suggestion, Stone Roses releasing a second album.

The Grid, a side project of Soft Cell’s David Ball list Bryan Adams being number one as the worst global event of the 90s, while suggesting that Oasis will be on the cover of Vox in 2000, as “We’ll all be having a 90s revival by then”

Nicky Wire’s Vox cover reply is “Hopefully Vox won’t exist by then” – His hope was correct.