Bryan Robson, in action for England, is the cover star as the 1986 World Cup gets closer.

The magazine opens with rumoured tansfer activity by the Old Firm, with Rangers wanting to sign Richard Gough (he would eventually sign in 1987, after a year at Tottenham Hotspur) from Dundee United and Andy Goram (It took until 1991, from Hibs, for him to join) while Celtic want to sign Stevie Clarke from St Mirren. That is ex Chelsea player and West Brom manager Steve Clarke.

Another Scottish player potentially on the move is John Robertson of Hearts, who has been attracting attention from Tottenham Hotspur.

With the World Cup getting closer, there is a double page spread previewing Poland’s chances.

Canada also get a preview. UK fans will get a glimpse of them before the tournament as they play England in a friendly at a 16,000 capacity venue, due to England manager Bobby Robson insisting that the game be played on grass, and not artificial grass that is used in Canada’s bigger stadiums.

Bryan Robson uses his column to argue the case for England as World Cup winners, giving a brief profile of the 22 players tasked with taking the trophy home from Mexico.

Swindon Town won the 4th division, and this gets a double page spread, with manager Lou Macari giving most of the credit to defender Colin Calderwood.

Also promoted and getting a double page spread were Norwich City.

In World Cup news, Socrates was left out of Brazil’s friendly against East Germany, while West Germany manager Franz Beckenbauer says this World Cup has come too soon for his team, but they have a great chance of winning the trophy in 1990.

The centre page poster is of AC Milan’s English duo of Ray Wilkins and Mark Hateley, settling in in Italy, complete with family portraits. Former Motherwell player Tom Hately wasn’t pictured, because he wasn’t born until 1989.

Charlie Nicholas uses his column to discuss the vacant manager’s position at Arsenal, suggesting that his preference is Alex Ferguson or Billy McNeill.

John Fashanu gets a full page profile, described as “articulate TV and radio star who listens to Dire Straits and Phil Collins”. His biggest ambition is to appear on The Cosby Show. Fashanu would be going to the World Cup in Mexico as a pundit for Nigerian TV. Fashanu describes himself as “Mean and nasty”

The magazine goes green for a few pages, with features on Northern Ireland and Plymouth Argyle.

There was an advert for the following week’s edition, which had a World Cup wallchart.

It was a World Cup that Trevor Francis won’t be playing. He tells Shoot of his disappointment of not being selected for England, and that he’s not planning on leaving Italy, where he is currently based. 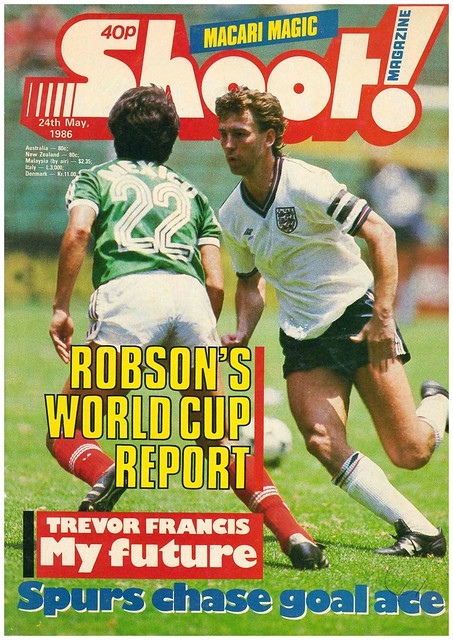 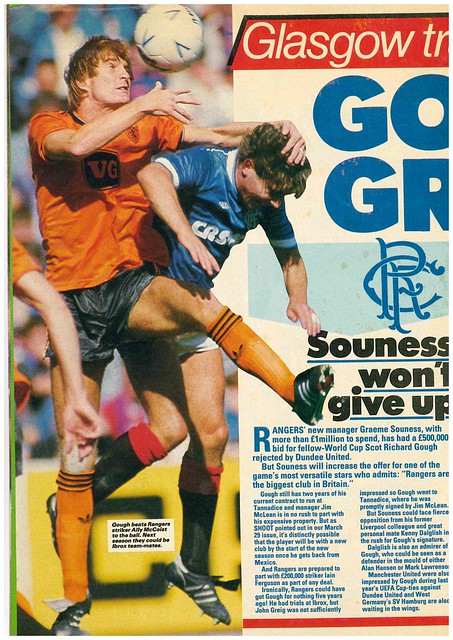 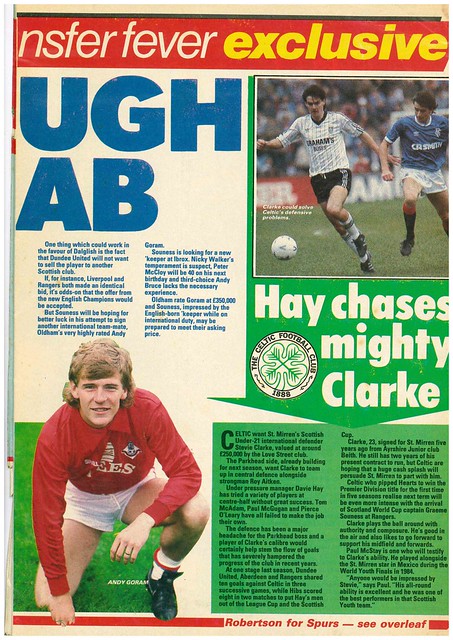 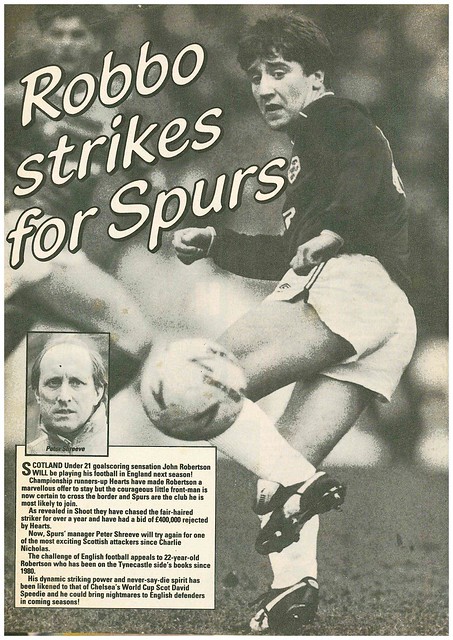 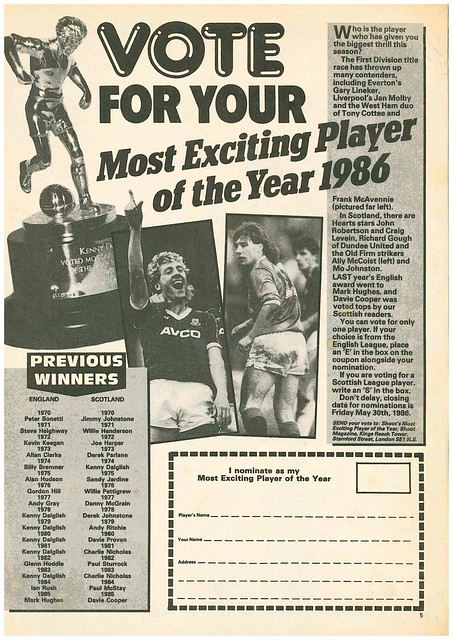 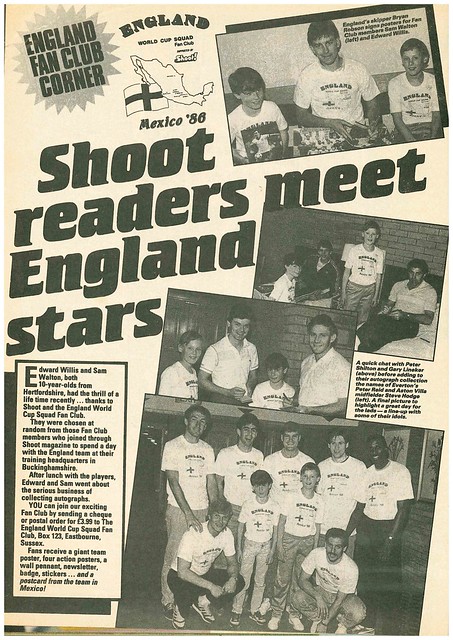 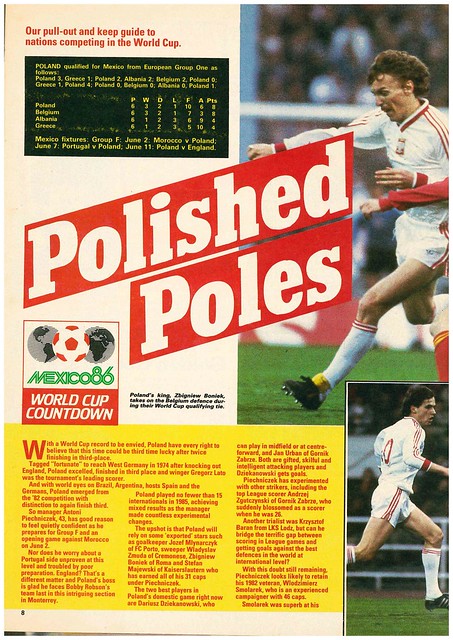 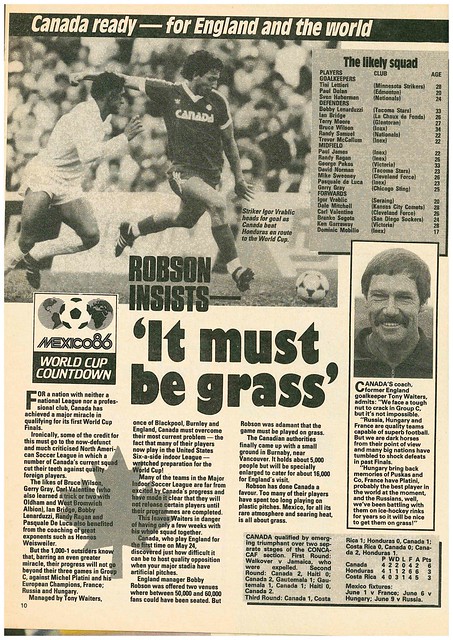 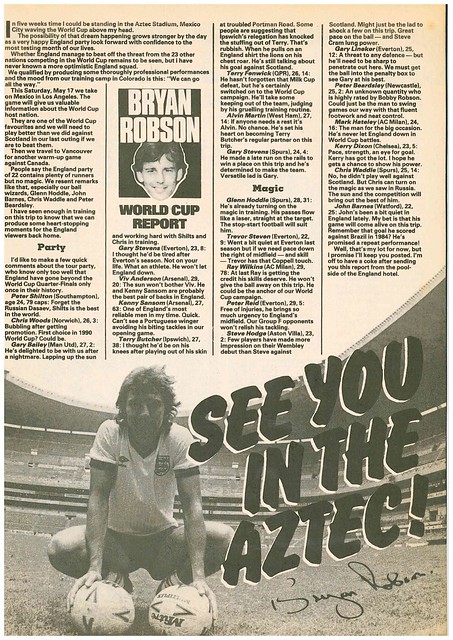 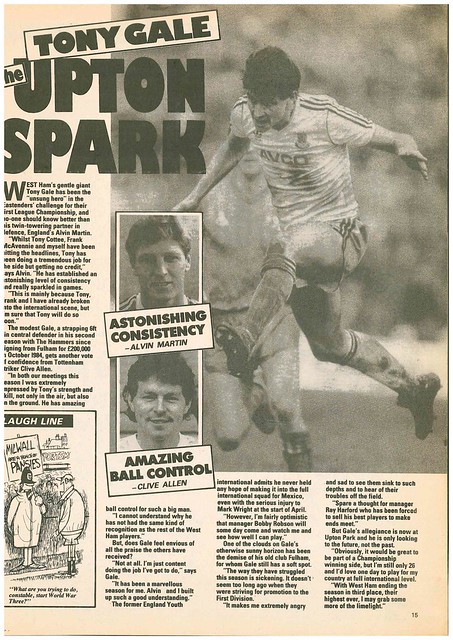 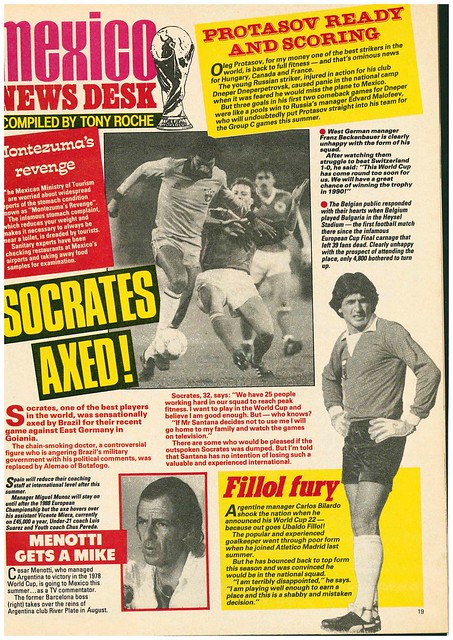 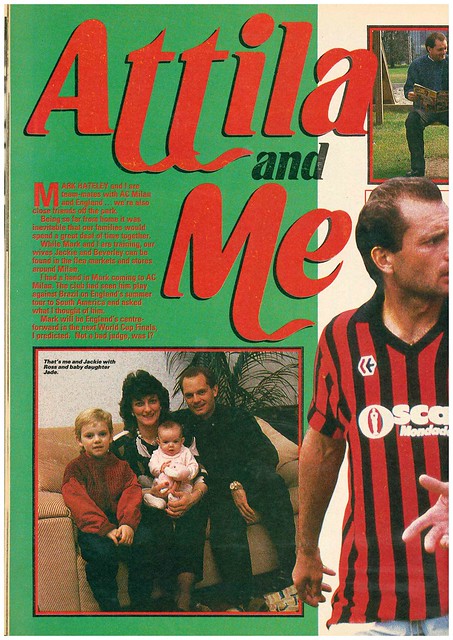 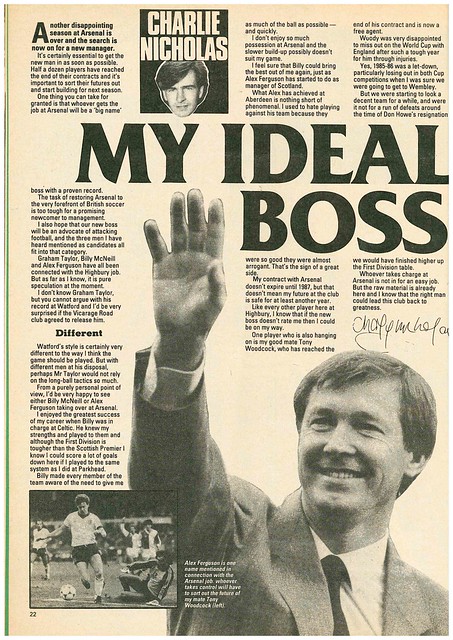 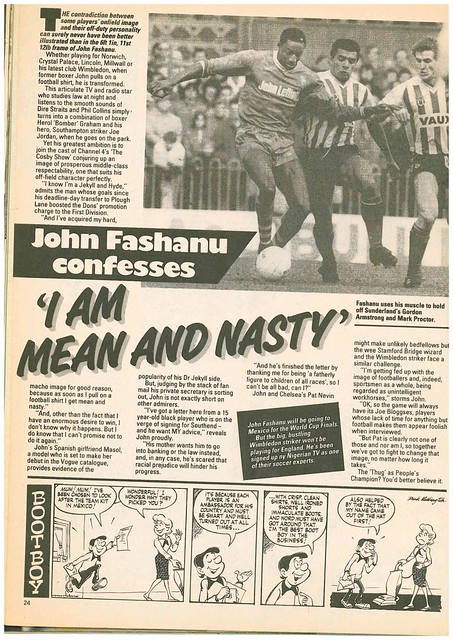 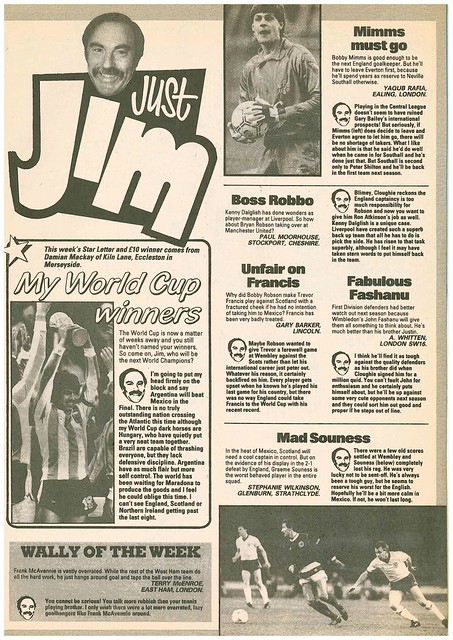 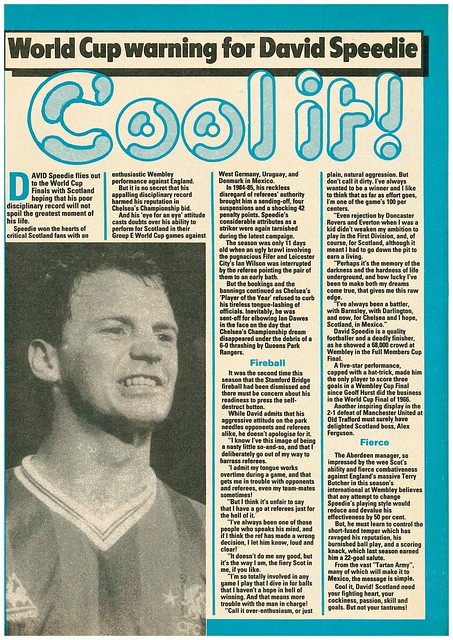 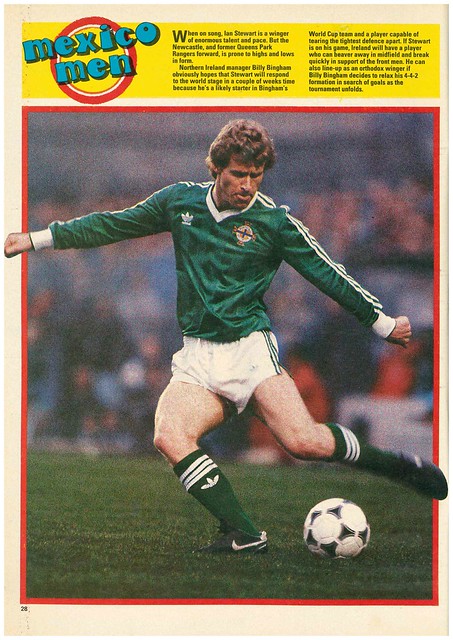 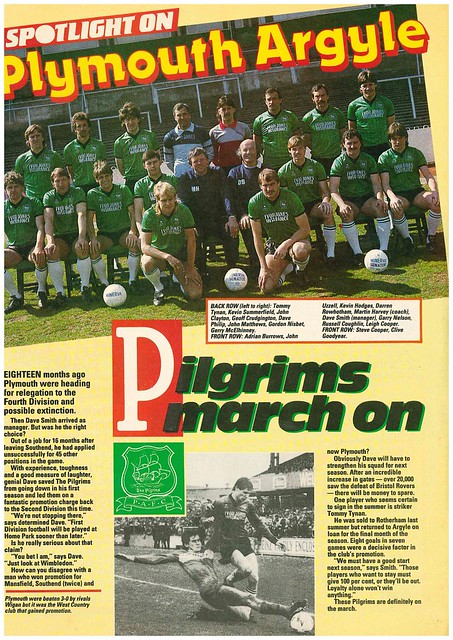 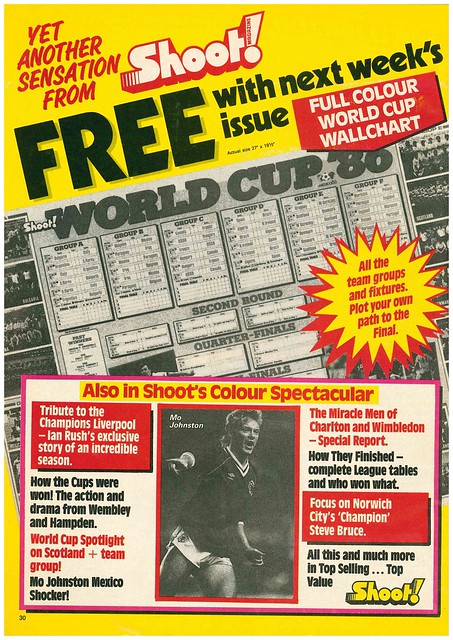 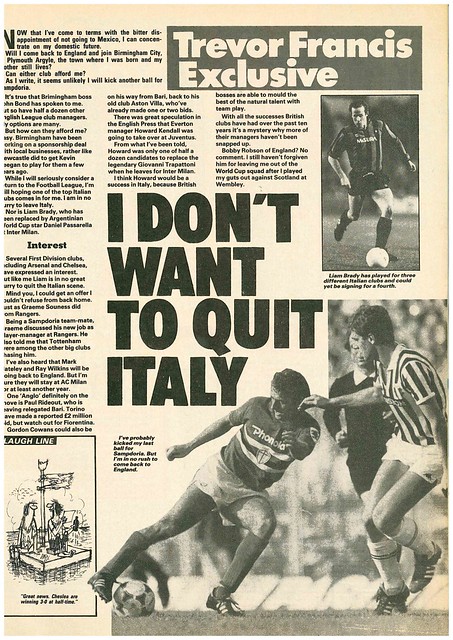 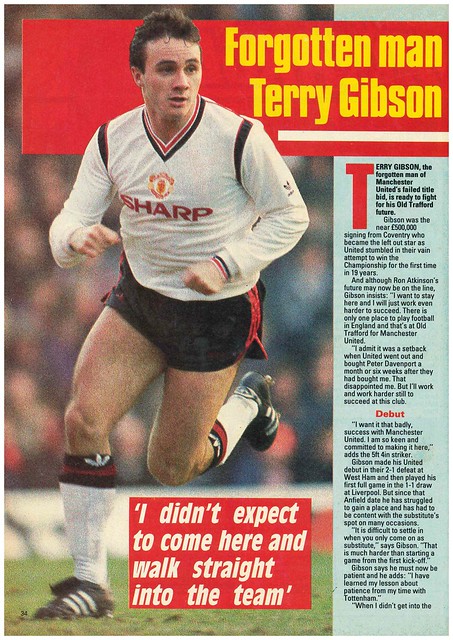 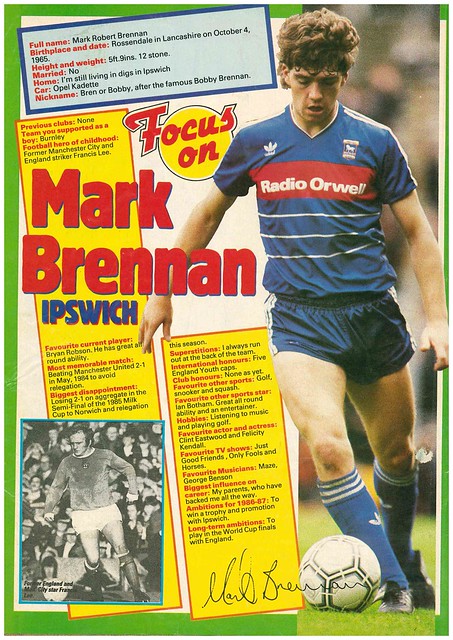