2018-2019 began for me in the middle of the World Cup, giving England v Sweden a miss to head to Wilgar Park to see Linfield start their pre-season against Dundela.

The following weekend, I headed to Dublin for a short weekend, taking in a match, Shelbourne v Drogheda United.

After that, was a ground being visited for the first time, Breda Park, to see Linfield take on Knockbreda.

That was then followed by a trip to Newforge as Linfield continued their pre-season preparation with a friendly against PSNI.

My first photo adventure of July came on the weekend of the Quarter-Finals of the World Cup.

Unfortunately, it wasn’t in Russia, it was closer to home, at Wilgar Park as Linfield began their pre-season preparations.

The following weekend, I headed to Dublin over the July Holiday, got some Street Art Photos, and went to see Shelbourne take on Drogheda United.

The month ended with two more pre-season friendlies for Linfield, away to Knockbreda and PSNI.

The last time I visited Tolka Park, I met the incmubent England manager Sven Goran Eriksson. I did keep an eye out for Gareth Southgate, but I couldn’t see him. He must have had other things on his mind.

As it was a Bank Holiday period on a Thursday and Friday, I decided to head to Dublin for an overnight stay on the Friday. Naturally, i’d be doing all the touristy stuff and spotting Street Art, the trip would also include a football match.

I had a choice of two games on the Friday night : Bohs v Sligo Rovers or Shelbourne v Drogheda United.

I plumped for Shelbourne v Drogheda, as it presented me with an opportunity for a potential last visit to Tolka Park, the future of the ground looking uncertain, with Shelbourne planning to move to a redeveloped Dalymount Park.

This would be my only game while I was in Dublin. Shamrock Rovers v AIK wasn’t postponed and needed to be played on the Friday, while there were no friendlies in Dublin on the Saturday, with Oxford United (v UCD) and Newcastle United (v St Patrick’s Athletic) playing in Dublin a few days either side of my visit.

They kicked-off in a sandwich, a few points behind UCD who are in the automatic promotion place, while themselves occupying a place in the Play-Offs, with the teams below them looking to take advantage of any points dropped and leap above them.

Getting to the ground was very easy. It did help that I had been there before. Certainly a lot easier than last year trying to get to UCD.

This was my fifth game seeing Drogheda United. The previous four (Linfield in 2006 and 2007, St Patrick’s Athletic in 2013, Bray Wanderers in 2014) had brought two wins and two draws. They were hoping I would continue to bring them good luck.

In the opening minutes of the game, Shelbourne had a glorious chance to score when Drogheda’s keeper was caught in possession, but the Shelbourne attacker dragged his shot wide. Drogheda responded immediately with a low shot that was easily saved.

It was a game where neither side really looked like scoring. There were very few clear goalscoring chances in the game.

With each passing minute, it was looking likely the game was going to finish 0-0. If there was to be a goal, it would more than likely be the only goal of the game.

On 89 minutes, Drogheda had a free-kick in a shooting position just outside the penalty area.

You know when somebody lines up a dead ball, you have a hunch that the ball is going in? This was one of those moments.

And so it proved, Sean Brennan fired home to give Drogheda the lead. Shelbourne still had time to equalise.

They had the ball in Drogheda’s half but never in their penalty area. Drogheda were able to hold out and get the three points.

Someone at Linfield must have been reading this blog, as they’ve just announced an away friendly against Knockbreda on Saturday. A new ground for me to visit. Looking forward to it.

This week, saw Easyjet announce new routes to Salzburg and Prague. That is very tempting. Prague especially. There’s a weekend in March 2019 where Sparta Prague, Dukla Prague and Bohemians Prague are all at home.

Might as well get a football trip to Mainland Europe before Brexit.

Paul Doolin of Bohemians and Denis Irwin are the cover stars of Irish Soccer Magazine, which you could have purchased for IR£1.50 at Tuthills. Sorry, I couldn’t get the sticker off.

The editorial focuses on Pat Dolan’s disillusionment with the League Of Ireland and his threat to quit, hoping that he doesn’t.

There is a preview of Republic Of Ireland’s forthcoming Euro 2000 away to Yugoslavia, stating that a draw would be a more than acceptable result.

That match would be postponed because of unrest in The Balkans, eventually being played in November 1998.

In foreign news, Manchester United, Liverpool and Arsenal are said to be involved in the creation of a European Super League.

There is a feature on TV coverage of football in Republic Of Ireland, as a new commercial broadcaster, TV3, is launched, and this is welcomed, as it means competition for RTE will mean they have to raise their game.

As well as looking forward to Yugoslavia, there is a look back at Republic Of Ireland’s opening Euro 2000 Qualifier, a 2-0 win over World Cup Semi-Finalists Croatia.

Eamonn Gibson has a column on British football, where he writes that the Bosman Rule and foreign import at other clubs have caused Manchester United to stand still. There is also a feature on the possibility of Wimbledon relocating to Dublin, after a recent poll claimed Dubliners were in favour of it.

There is a preview of domestic games in October, the highlight being the clash between St Patrick’s Athletic and Cork City at the end of the month.

There is also a preview of the games in September, a month that saw Brian Kerr awarded Manager Of The Month.

Cork City were recently in European action, and their defeat in the European Cup Winners Cup to CSKA Kiev gets a page of coverage.

In Dublin, St Patrick’s Athletic have announced plans to leave Richmond Park to build a new stadium at nearby St Michael’s Flats within the next five years, while the FAI have announced plans for a 40,000 all seater stadium, as well as redevelopment for Tolka Park and Dalymount Park.

The new commercial broadcaster TV3 gets a feature, focusing on their proposed football coverage, having bought the rights to Republic Of Ireland’s away Euro 2000 Qualifiers. 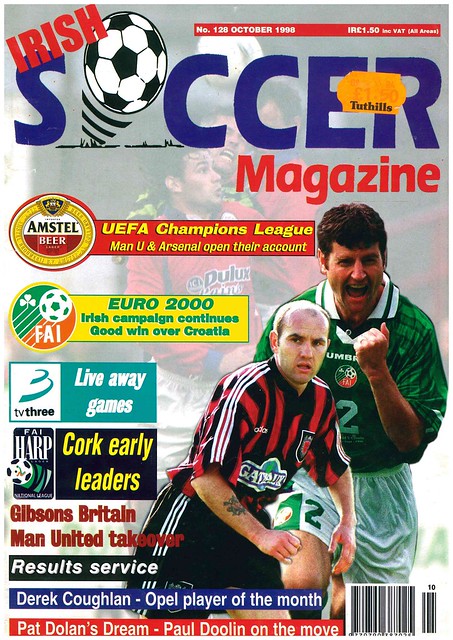 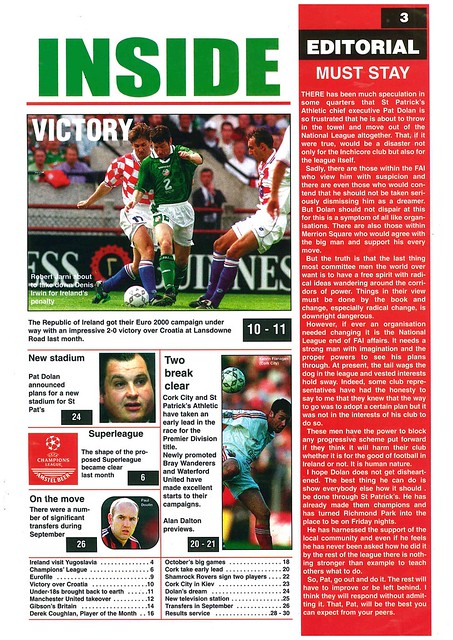 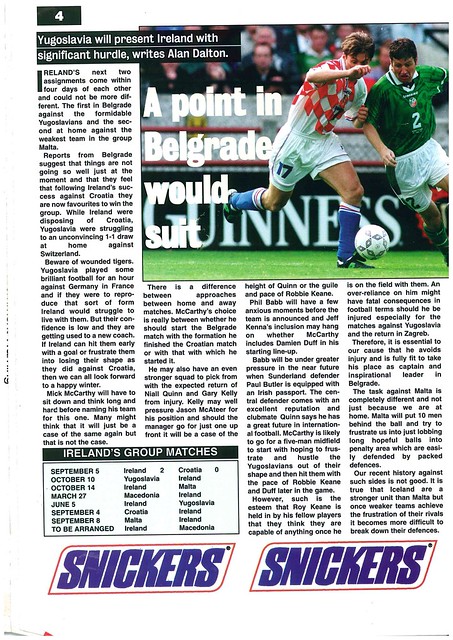 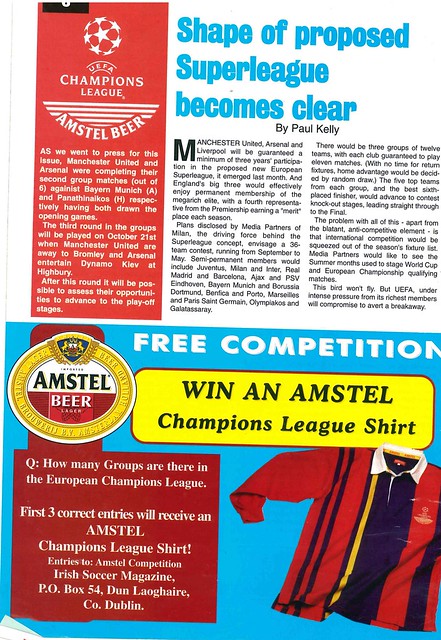 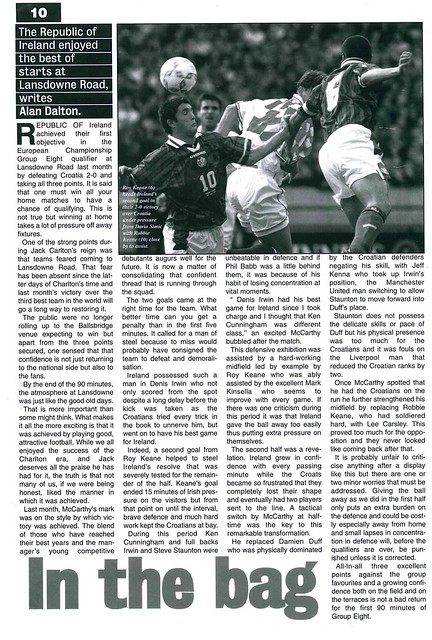 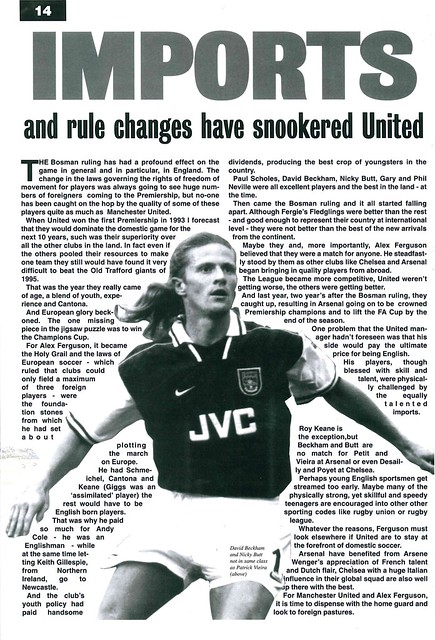 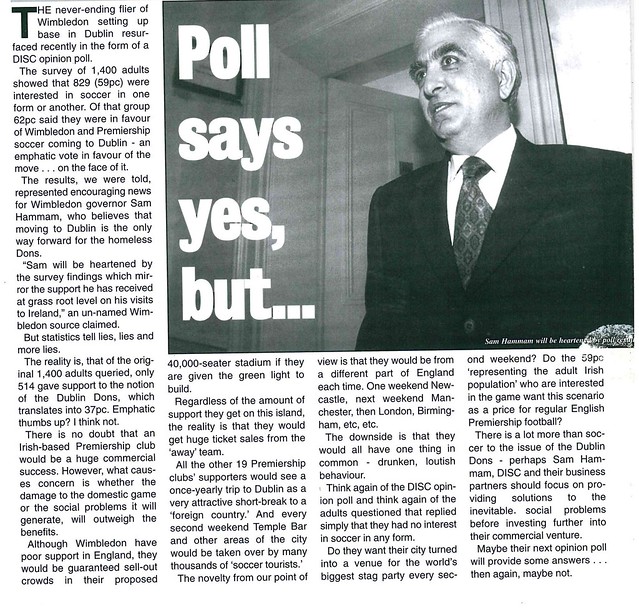 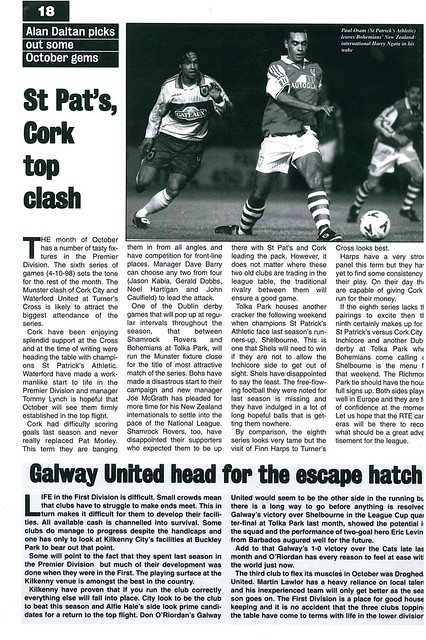 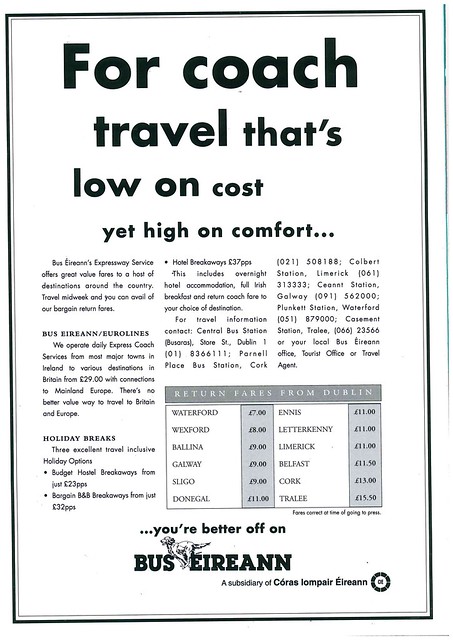 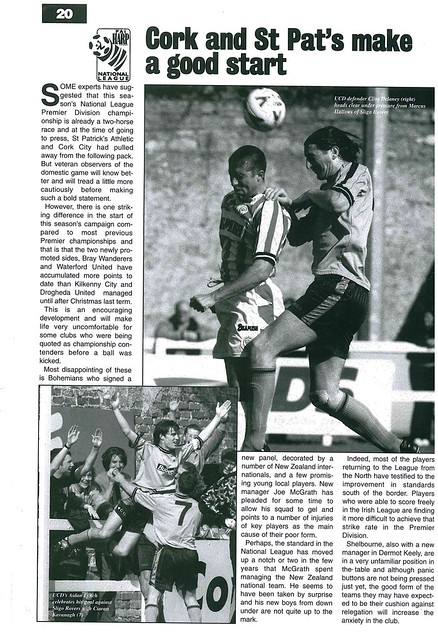 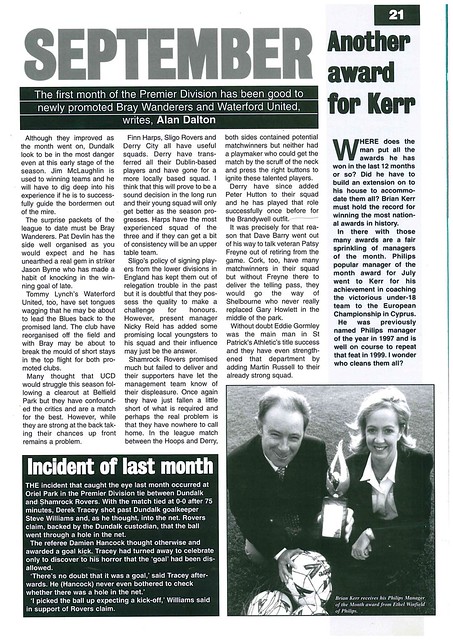 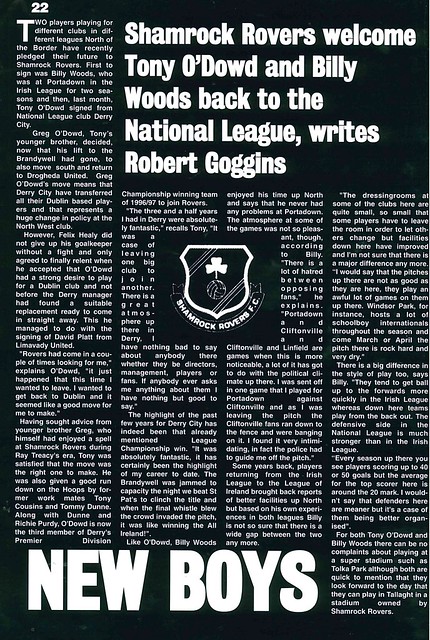 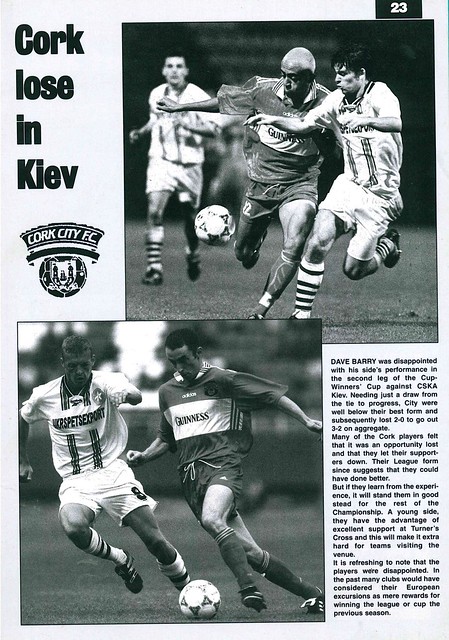 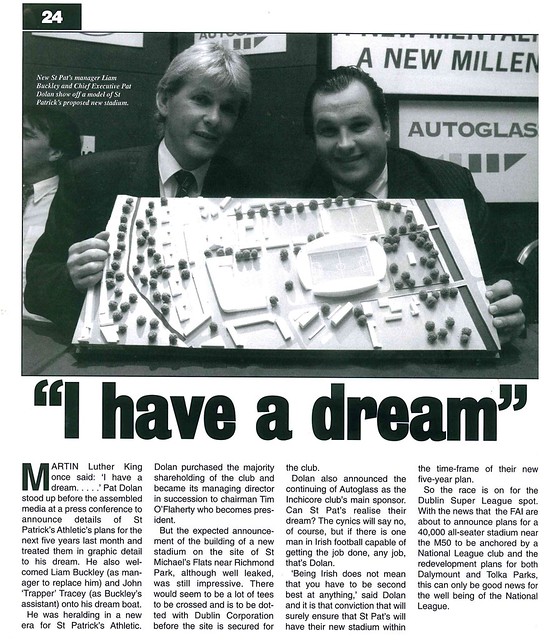 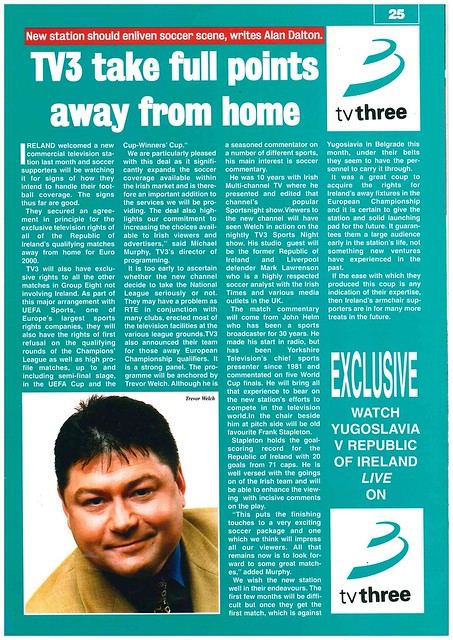 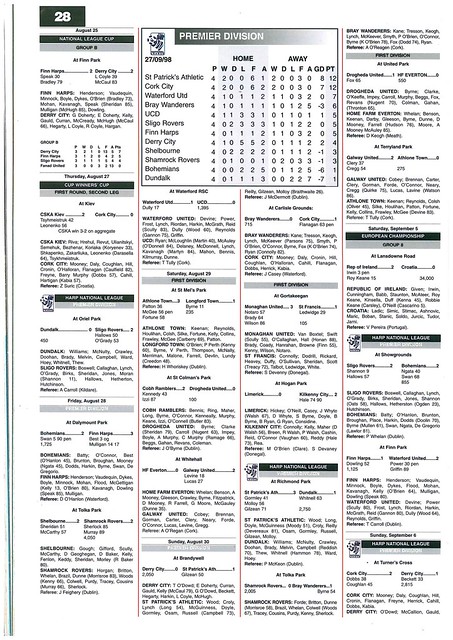