Bryan Robson, in action against Notts County, is the cover star, with the headline “Robbo’s Back”, as he is interviewed in this edition.

As you open the magazine, there is a double page feature on Wales European Championship Qualifier in Germany, where Wales need a draw to virtually qualify for the finals in Sweden.

Jimmy Greaves assesses the two teams and predicts a win for Germany, and so it proved, with Germany winning 4-1.

Bryan Robson’s interview is part of Shoot’s preview of England’s European Championship Qualifier against Turkey. Turkey had been good opponents for Robson, with 5 goals in his 3 previous appearances against them.

England’s previous game against Turkey saw Robson left out of the squad, and he thought his international career was over at the age of 34, but his recent form for Manchester United saw him earn a recall.

As it turned out, the game against Turkey was Robson’s last cap for England.

Another player making an England comeback was Stuart Pearce, who explains that he was left out of the squad for the recent friendly against Germany as he was serving a domestic suspension.

Elsewhere in the group, Republic Of Ireland face a crunch game in Poland, and Shoot interviews Mick McCarthy in preparation of this.

In news, Charlie Nicholas had all his medals stolen after a burglary at his house, while Celtic have had a bid rejected for Terry Phelan, while Chelsea are planning a move to sign Matt Le Tissier.

Also in Scotland, John Robertson of Hearts gets a double page interview where he says that Hearts are determined to bounce back after defeat against Celtic, their first of the season. Robertson also gives Shoot the lowdown on his Hearts team-mates.

Peter Ndlovu of Coventry City gets interviewed s he adjusts to life in England, telling Shoot that he mostly listens to the radio and watched TV.

Also adjusting to life in a new country is David Platt, who tells Shoot he is enjoying life in Italy, despite Bari not winning a game and their manager resigning.

I wonder did they discuss the matter a few months later in the dressing room when Rideout signed for Rangers?

Talking of Rangers, a reader writes to Jimmy Greaves to say that Rangers will continue to be minnows on a European stage due to a lack of competition in Scotland, while another reader asks about the possibility of Leeds winning the league, and Greaves says they need Lee Chapman to start scoring in order for that to happen.

In competitions, you could win a pair of Quaser boots, and get to meet Gary Lineker, Matt Le Tisser or Charlie Nicholas at one of their respective team’s home games.

Tony Cottee gets a profile, revealing that if he wasn’t a footballer, he would be a Fireman, or work for his dad as an Insurance Broker.

In ads, there was an advert for a teen mag called Look-In (possibly an IPC publication, I can’t verify) which had Rik Mayall as it’s cover star, talking about his role in Drop Dead Fred.

Alongside that, is an advert for the following week’s edition of Shoot, which comes with free Pro Set cards.

The magazine ends with a double page feature on Scotland’s European Championship Qualifier in Bucharest where a win would virtually guarantee qualification to the finals.

They lost, but other results went their way which meant they made it to Sweden. 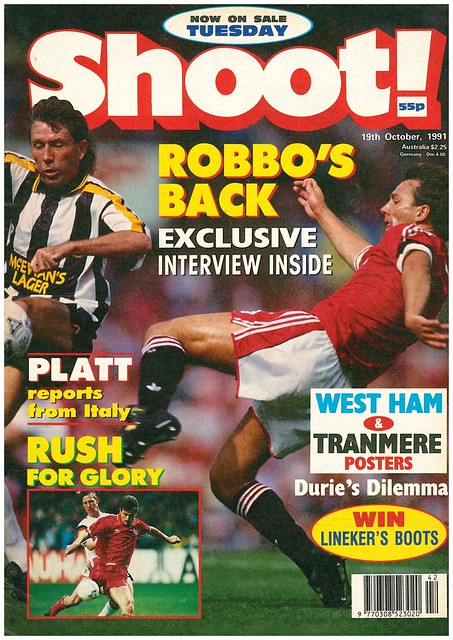 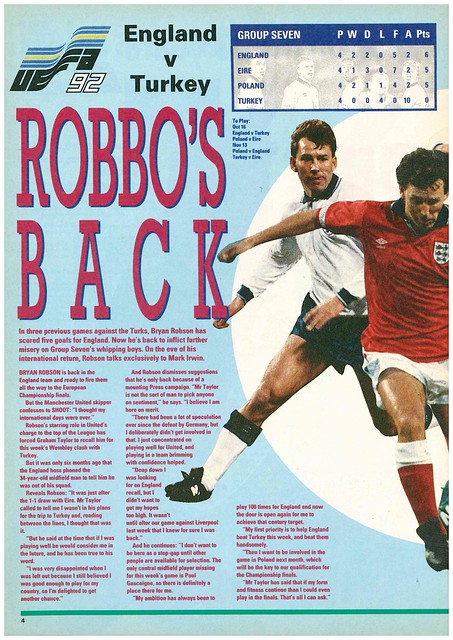 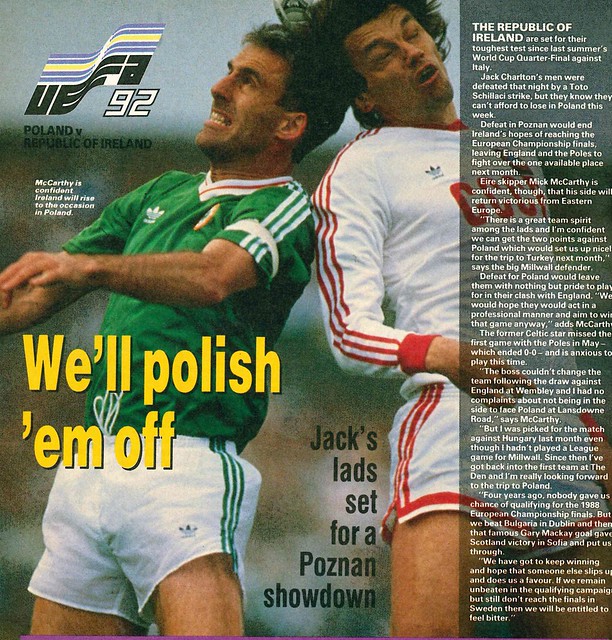 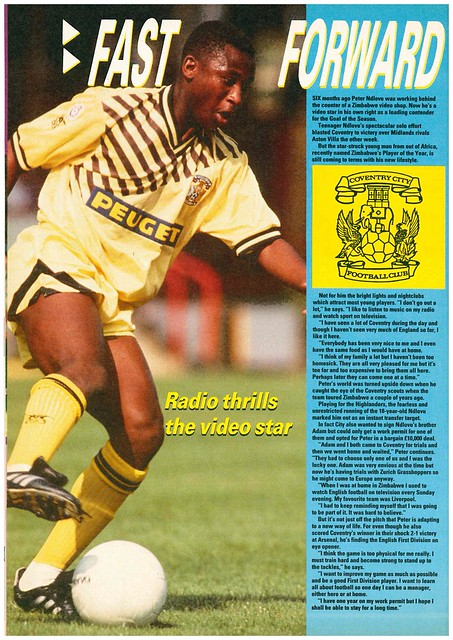 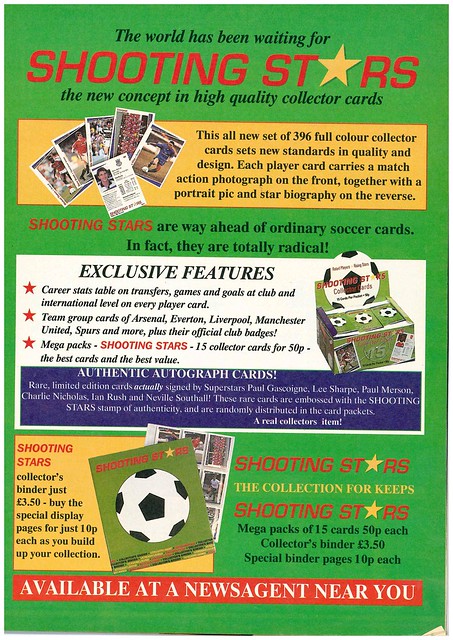 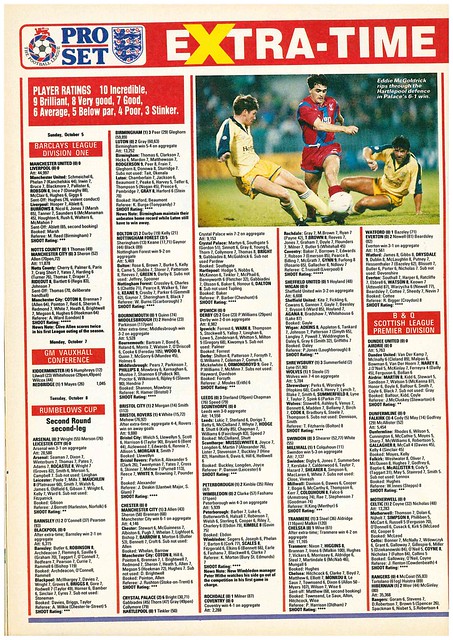 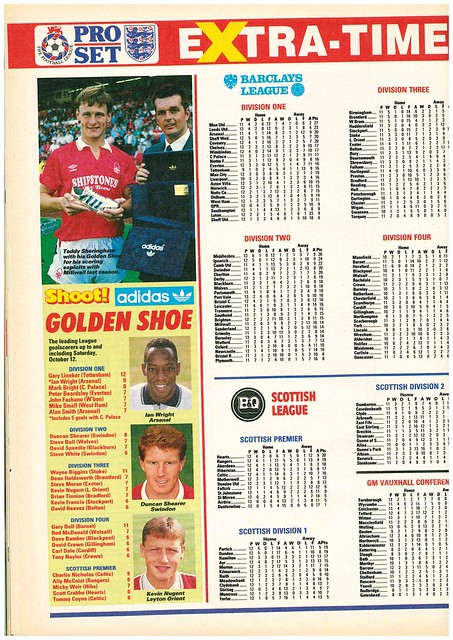 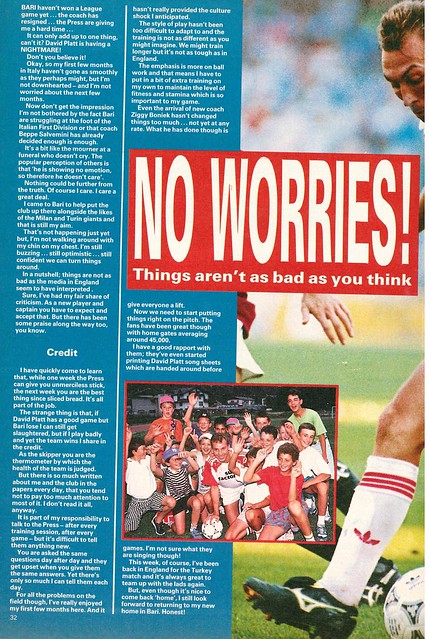 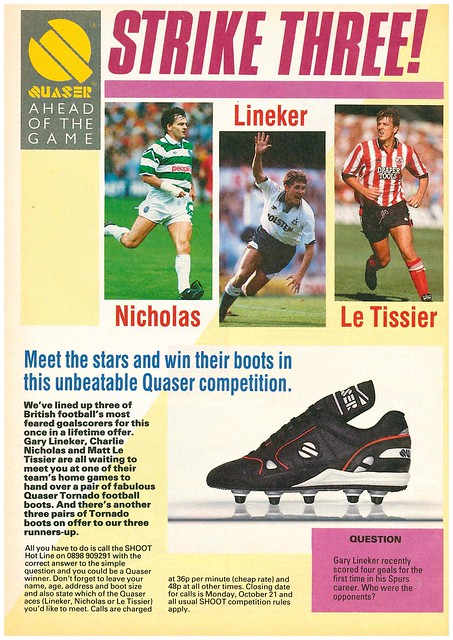 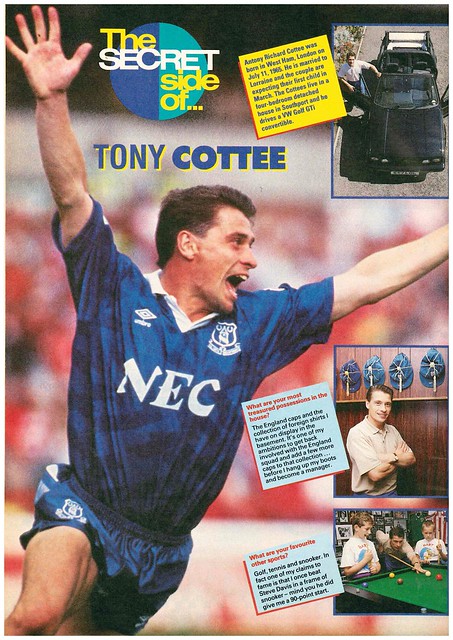 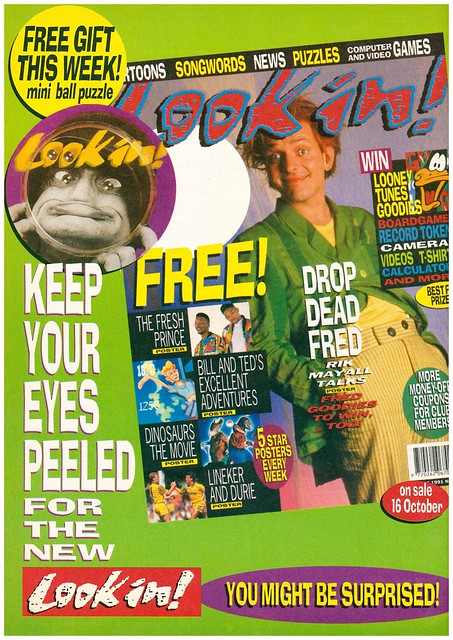 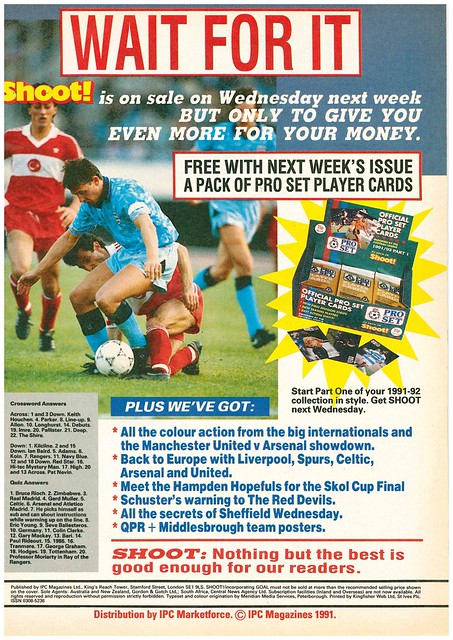 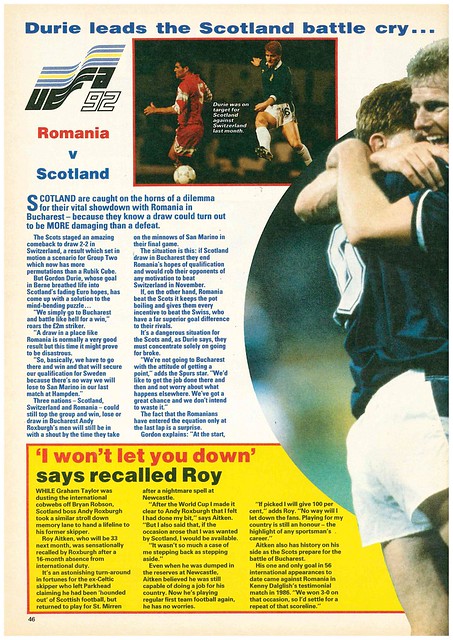 The editorial, calls for a change in the structure of English football, claiming there are too many games (there were 42 games in England’s top flight that season) as the national team is struggling as a result of players being too tired.

Shoot previews both FA Cup Semi-Finals, making the bold prediction that the final will be Wolves v Ipswich. The final, was Tottenham Hotspur v Manchester City. They also predict that it would be an Old Firm Scottish Cup Final. They were half right, as it was Rangers v Dundee United.

Andy Gray has a column in this edition, focusing on Scotland’s recent World Cup Qualifier against Northern Ireland (which finished 1-1), complaining about the defending for Northern Ireland’s goal, and stating that Scotland were confident of getting a good result in the return game in Belfast (It finished 0-0)

He states that Scotland were happy with two wins and two draws, but had expected the two wins to be at home rather than away.

He also previews the FA Cup Semi-Finals, unsurprisingly predicting his Wolves team would beat Spurs, and that Ipswich would beat Man City. He’s got a future in the punditry game, that boy.

In news, Arsenal are battling with Inter Milan, Juventus, Bayern Munich and Hamburg for Michel Platini, set to leave St Etienne at the end of the season, and TV Commentator Martin Tyler has a book about the history of the FA Cup Final ahead of this year’s game, the 100th FA Cup Final.

For just £1.60 plus P and P, you could have a framed portrait of the 1981 Aston Villa team. To be fair, they did win the league that season.

There is a double page poster of all four FA Cup Quarter-Finals, and the goals which decided them.

Derek Johnstone and Danny McGrain take it in turns to do a Scottish football column for Shoot, and it was Johnstone’s turn, hoping for an Old Firm Scottish Cup Final, so that Rangers could get the chance to avenge their defeat to Celtic in the 1980 final.

There is then a double page poster of the Home Nations (England in a friendly v Spain, Scotland v Northern Ireland and Turkey v Wales World Cup Qualfiers) and Republic of Ireland (v Belgium) internationals. Shoot describes Wales as “The best placed Home Nation to reach the finals”

As it turned out, Wales were the only home nation not to reach the 1982 World Cup finals.

Rotheram United, battling for promotion to the Second Division, get a full page profile, focusing on the success of their young manager, Ian Porterfield, with a team poster overleaf.

After 14 years without the league title, there wasn’t much cheer for Manchester United supporters in 1981, but they did win one trophy that year …….. Shoot’s Best Programme of all England’s top flight clubs.

Meanwhile, Shoot does a feature on promising youngsters at West Bromwich Albion dubbed “Atkinson’s Angels” featuring Remi Moses and Bryan Robson. Within six months, Robson, Moses and Atkinson would all have left Albion for Manchester United.

On the back page, there is a profile of Brighton star Steve Foster, pictured with trademark headband, where he reveals his favourite singers are Paul McCartney, George Benson and Dennis Waterman.

This edition of the Magazine Archive sees us slap bang in the middle of Euro 96, as Paul Gascoigne and Alan Shearer adorn the cover of Shoot, giving the reaction to England’s 2-0 group win over Scotland.

The rest of the magazine is dedicated to Euro 96’s other games with reviews and analysis.

Meanwhile Roberto Mussi says that Gianlunca Vialli, recently signed for Chelsea, will be a big star in English football.

It didn’t quite work out that way as the signing of fellow Italian Gianfranco Zola saw Vialli mostly used as a substitute, before becoming player-manager of Chelsea in February 1998.

Meanwhile, in Group D news, Turkey star Abdullah Ercan issues a “Come and get me” plea to English Premier League clubs. He never played in the Premier League.