It’s a new era for Irish League football, as the top flight is reduced from 16 clubs to 12, with Michael Gault and David Rainey being the cover stars.

Northern Ireland have just started their campaign to qualify for the 2010 World Cup, and there is a full page review of their opening games against Slovakia and Czech Republic, where they only got one point from those two games.

Prior to that, Northern Ireland travelled to Scotland, and this game also got reviewed, as well as supporters experience of the trip.

Aaron Hughes gets interviewed, telling NI Football that he enjoys living in London now that he plays for Fulham, having been an Aston Villa player the last time he spoke to them.

From one Northern Ireland player who used to wear claret and blue to one who does, there is an interview with Burnley striker Martin Paterson.

Irish League sides in Europe during the summer of 2008 also gets reviewed and analysed.

There was a story which was a load of balls. The IFA agreed a deal with Umbro to supply matchballs. In competitions, you could win a pair of Umbro boots endorsed by Peter Thompson.

Roy Walker gets a double page interview, having just been appointed as Ballymena United manager, a year after a two day stint as Glentoran manager.

Relegated on a technicality, there is a full page feature on Portadown, as they aim to return to the top flight at the first time of asking.

There is also a double page feature on Northern Ireland’s underage sides, as they prepare for a busy run of fixtures.

Tim Mouncey is interviewed, spilling the beans on his team-mates, revealing that Andy Hunter is the grumpiest player at Portadown.

Warren Feeney gets interviewed having signed for Dundee United, and his ambitious to win trophies at Tannadice.

There is also a full page feature on newly promoted Bangor, who have just made Irish League history by playing in the first game to be played on a Sunday, against Glentoran at The Oval.

There are also interviews with Peter Thompson (Stockport County) and Steven Davis (Rangers, loan move made permanent) as they begin the season at new clubs. 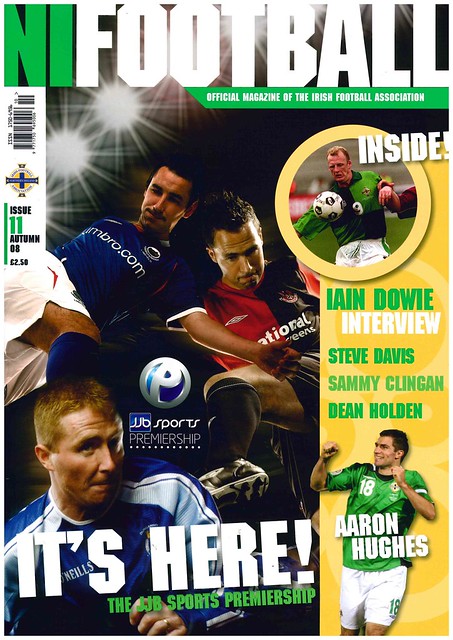 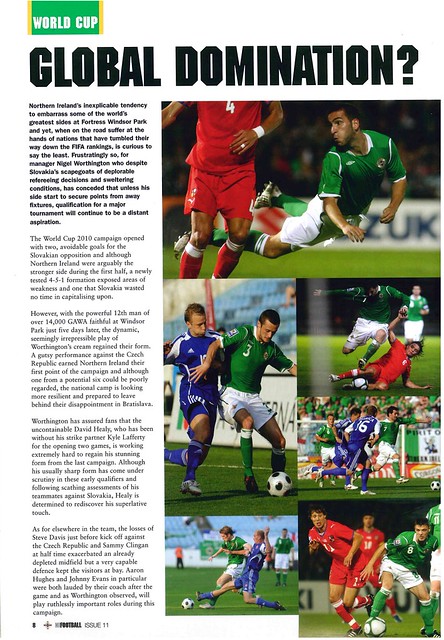 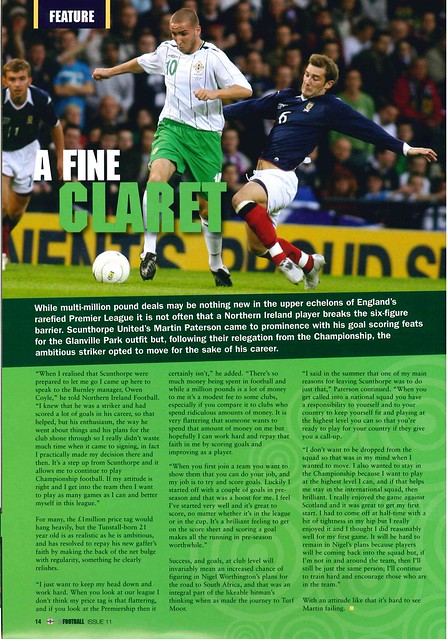 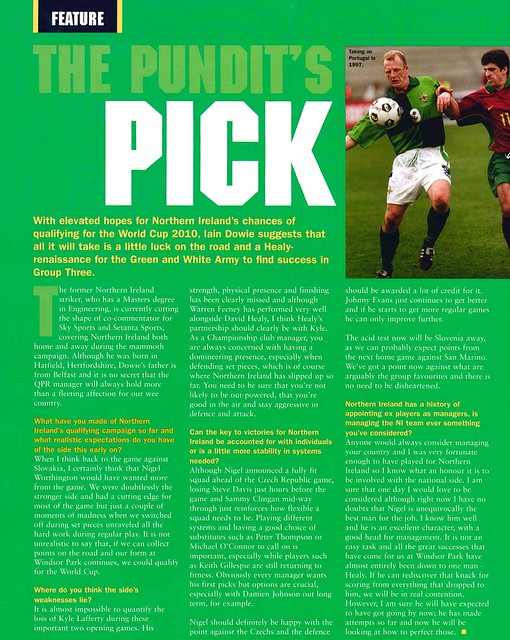 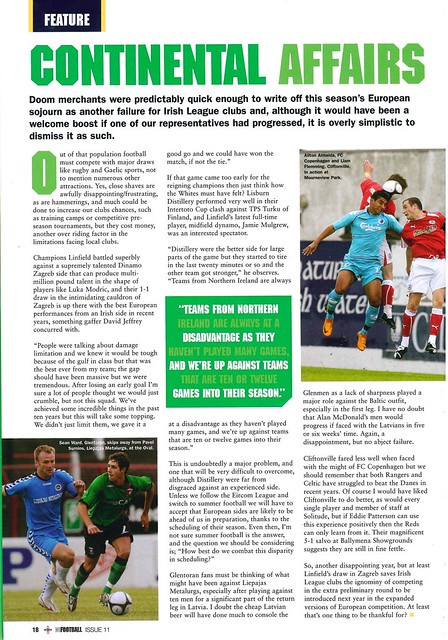 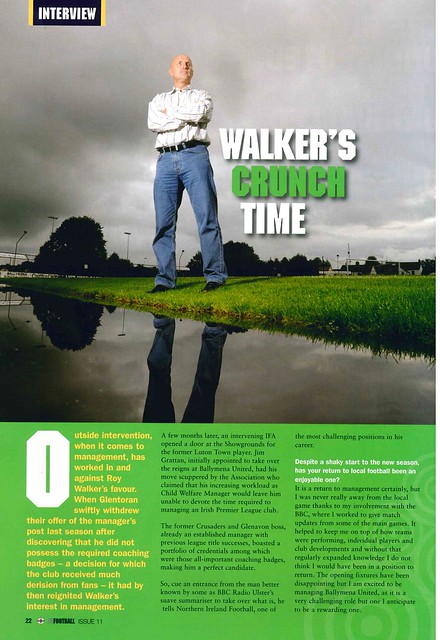 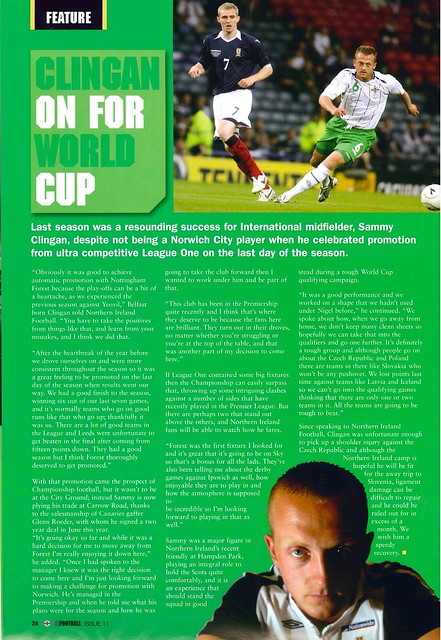 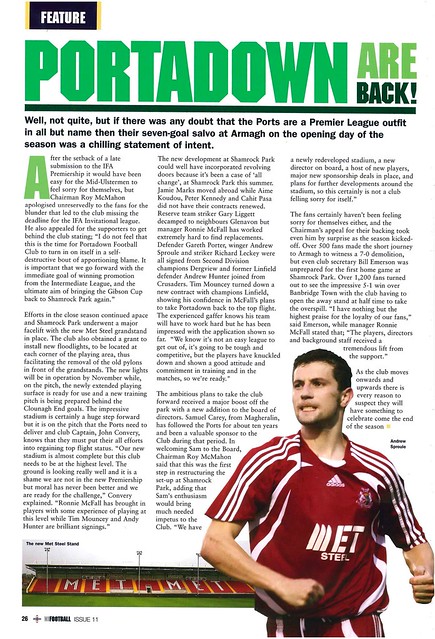 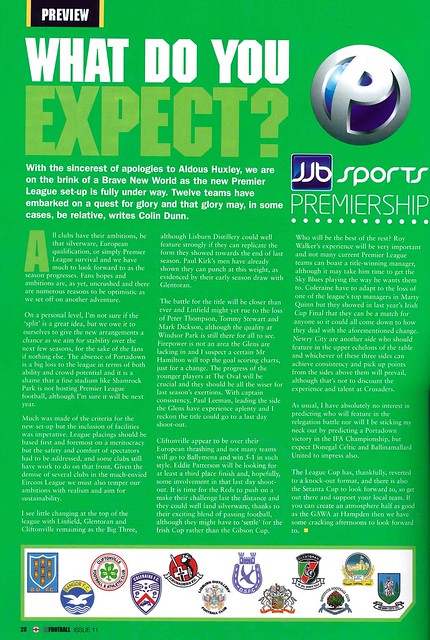 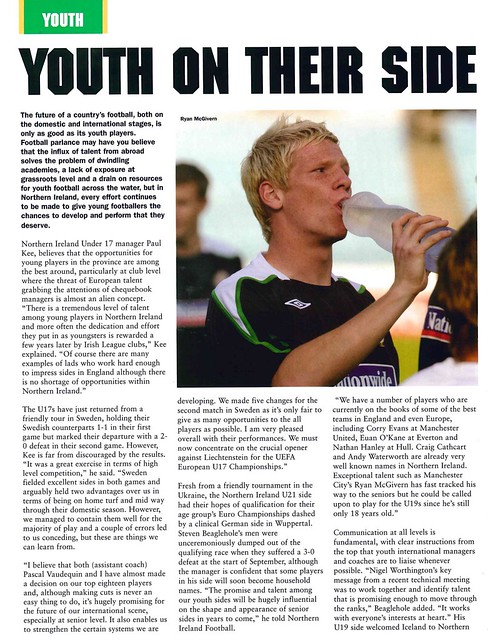 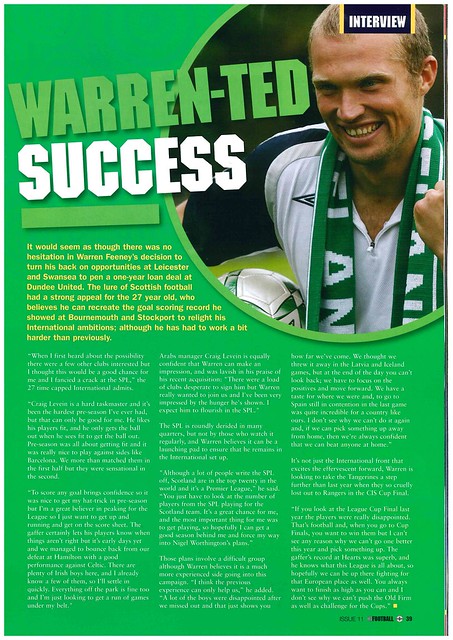 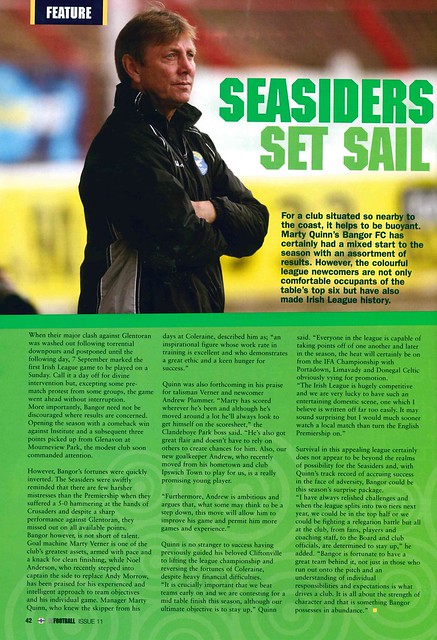 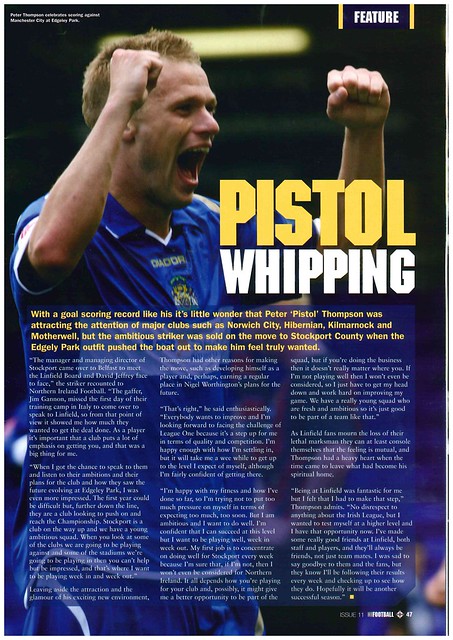 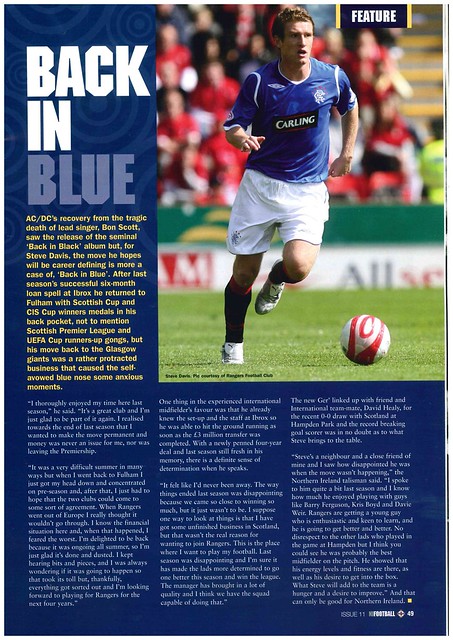 We might have had differences of opinion regard tactics, team selection and transfers through the years, but his service and success he’s brought to the club as a player and in this spell as manager, he deserved the courtesy of me going to his last game. Plus, i’d already bought a ticket two weeks ago, so I had to go.

With the title gone on Tuesday, today was all about signing off with a win.

It started off as end of season stuff. before Linfield came into it, making the most of their left sided players in the first-half, with all of the good play coming down that side. A goal came inside the first ten minutes when a cross from the left was scuffed in by Mark McAllister.

Soon afterwards, Glenavon equalised. I couldn’t fully see their goal due to latecomers standing in my road trying to decide where to sit.

Within minutes, Linfield were back in front when a cross (from the left) was finished by Ross Clarke, getting a long overdue start.

Clarke was fantastic today, running at Glenavon’s defence, putting fear into them, setting up chances and making things happen. Hopefully, we’ll be seeing more of him next season.

Linfield played some good stuff at times. Pity it didn’t happen in the four weeks previous. Peter Thompson, in his first start for a while, fired home from close range after a Mark McAllister shot was saved by Glenavon’s keeper to give Linfield a 3-1 half-time lead.

Glenavon’s league form has dipped since their Irish Cup Semi-Final win, and it was no surprise that Linfield started the second-half strong, going close through an Aaron Burns header.

Peter Thompson soon made it 4-1 before a lovely passing move saw Aaron Burns make it 5-1, the last goal under David Jeffrey.

Late on, Glenavon made it 5-2 on 83 minutes. Part of me thought it was going to end 5-5 like the West Brom v Man United game last season.

Within minutes of the final whistle, it was confirmed that the new manager will be Warren Feeney, effective from Thursday.

Interesting appointment. I wasn’t part of the recruitment process, so i’ll trust the judgement of those who were.

Already, there are those mocking his pedigree as Assistant Manager at Salisbury City, who have just finished in the highest league position in their history.

He knows the club and it’s history, and is young enough to be a long-term appointment (success permitting)

Interesting times with a new manager, and a stadium set to be redeveloped. Football is changing and Linfield are changing. It’ll be an interesting era, hopefully, a successful era.

One of Feeney’s opponents next season will be Institute, promoted to the top flight today after a 4 year absence. I’ve never been there, so will be looking forward to attending that game.

My football watching for the season isn’t over, as I got an Irish Cup Final ticket when in Lurgan today.

Linfield wise, the season is over, but it’s just over two months until the UEFA Cup starts. It looks like Linfield will be a seeded team, so hopefully, that will result in a winnable tie. A wee trip to North Wales would be nice.

Now is the time to do a Pre-Season Wishlist – Stranraer, Dundela, PSNI, Ards or Bangor, all away.

Can’t wait to start doing this all again in July.

A couple of weeks ago, I posted a blog looking at some of the football related graffiti and murals that have or are currently occupying wallspace in Belfast.

One of those featured was a ‘Welcome To Sandy Row’ mural, featuring images of Grant McCann and Warren Feeny in action for Northern Ireland.

Since it was uploaded, there has been an addition to the mural, which I noticed when I was in Sandy Row earlier today.

The image of McCann and Feeney now has a mosaic of the IFA crest above it.

Apologies for the poor composition of the photo, but the mural is situated in front of car parking spaces, and traffic going in either direction mean you have to take your photo from the footpath.

The original photo was taken on a Sunday morning, when traffic was lighter both in terms of parking and driving through, making it easier to get the photo I wanted.

You may also notice that a crowd has been added into the background of the image, and that the words ‘Our Wee Country’ have been written above the image.

Also tried to get some images of the sun going down over the River Lagan, with mixed results.

Was out today getting some photographs, and as promised, got one of the mural in progress in Sandy Row.

As you can obviously see, it’s a football themed mural. When I originally saw it, it was just Grant McCann, which led me to think that it was dedicated to local footballers, but the presence of Warren Feeney seems to have skewed that theory, as he comes from East Belfast (But he’s OK, he supports Linfield, like the majority of East Belfast residents)

I genuinely can’t wait to see what it looks like when it is finished. When it is, it’ll be posted up here.

Meanwhile, got some other graffiti today, including this one, complaining that a road sign should in fact be a tree.

Unfortunately, one of my favourite pieces of graffiti is now no more.

There’s enough wall space in Belfast for crying out loud.

Some other graffiti spotted includes this, this and this.