Roy Keane is the cover star in a weekend that Manchester United face Chelsea in the FA Cup Final.

It is his fellow Corkonian and United team-mate Denis Irwin who is interviewed, getting a double page feature.

Across Manchester, Garry Flitcroft shows Match around his house, showing off his Luther Vandross and Mariah Carey CDs. His dad is a builder and has told him to invest his money in property.

Arsenal’s win over Parma in the European Cup Winners Cup Final gets a double page spread.

There is a pull out of World Cup Group A, featuring USA, Switzerland, Romania and Colombia.

David Elleray gets a profile, as he gets ready to referee the FA Cup Final, revealing that Carrow Road is his favourite ground.

Alan Moore of Middlesbrough gets a profile, being predicted as a star of the future. 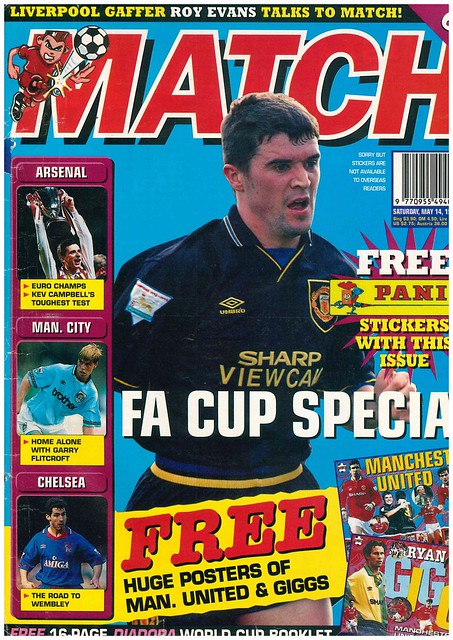 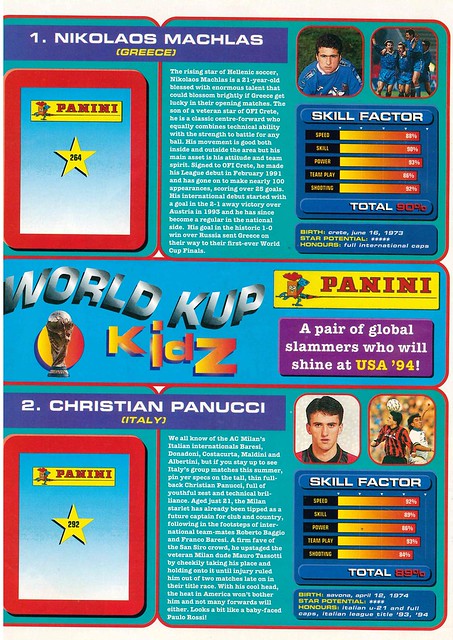 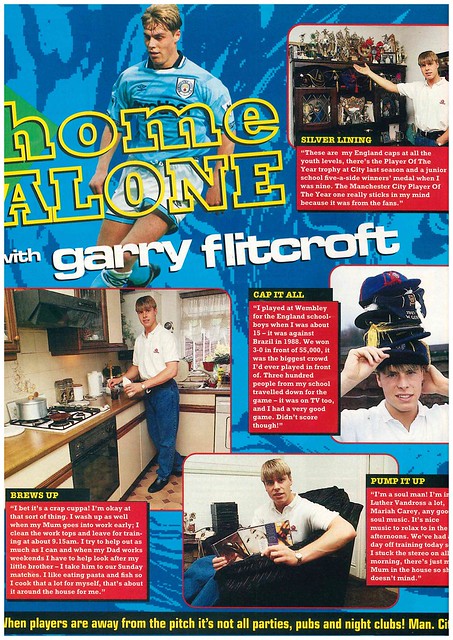 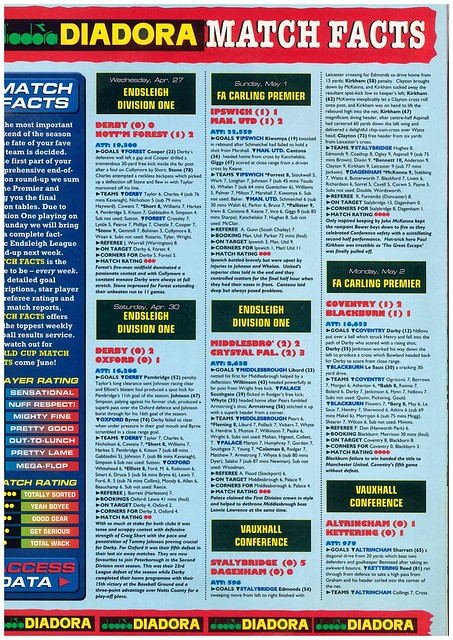 Rush gets a double page spread, saying that Wales will win and set up a Play-Off against a team from Oceania, due to Scotland missing the suspended Graeme Souness.

Unsurprisingly, Scotland think they will get the win, according to Shoot columnist Willie Miller.

The match ended in a 1-1 draw, a result which sent Scotland into a Play-Off against Australia, which they won 2-0 on aggregate to reach the World Cup in Mexico.

The game will be remembered for the death of Scotland manager Jock Stein, who collapsed on the touchline moments before the final whistle.

Sammy McIlroy gets interviewed about Northern Ireland’s game in Turkey, expecting Turkey to provide difficult opponents despite losing 8-0 to England earlier in the group.

Kevin Sheedy gets interviewed about Republic Of Ireland’s chances of reaching the World Cup, stating that they can do it. Sheedy had yet to win an away game in his international career, and would need to start doing so, with trips to Switzerland and Soviet Union coming up.

England’s game against Romania is previewed, with manager Bobby Robson singing the praises of Gary Lineker, who had only made his international debut earlier that year.

Bryan Robson uses his column to focus on players who are aiming to head to Mexico next summer, such as Adrian Heath, Paul Walsh, Peter Davenport, Steve Williams and Remi Moses.

Justin Fashanu also gets a profile as he hopes to get Brighton promoted from the Second Division.

Charlie Nicholas uses his column to express his fears after Scotland manager Jock Stein considers picking only domestic based players after having problems getting access to English based players.

One Scottish striker not worried about not getting picked is Kenny Dalglish, also player-manager at Liverpool, telling Shoot he’ll have no hesitation in dropping himself.

Meanwhile, there is disharmony with the West Germany squad, due to a row breaking out between Berndt Schuster and Karl-Heinz Rummenigge. Schuster was currently in international exile due to a disagreement with manager Franz Beckenbauer.

A dispute with broadcasters means that no club games in England are televised, so Shoot does double page photos of some of the best action. 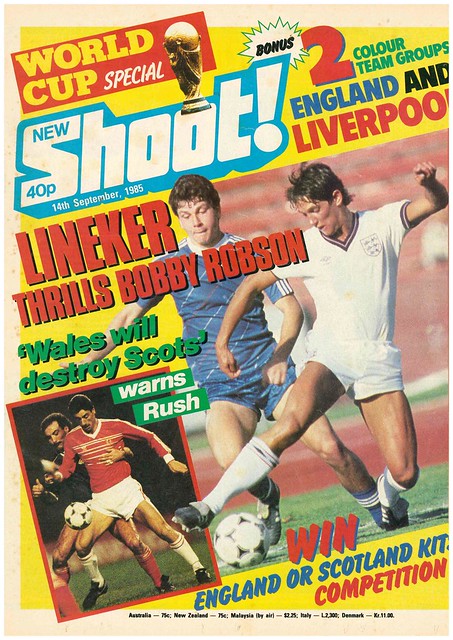 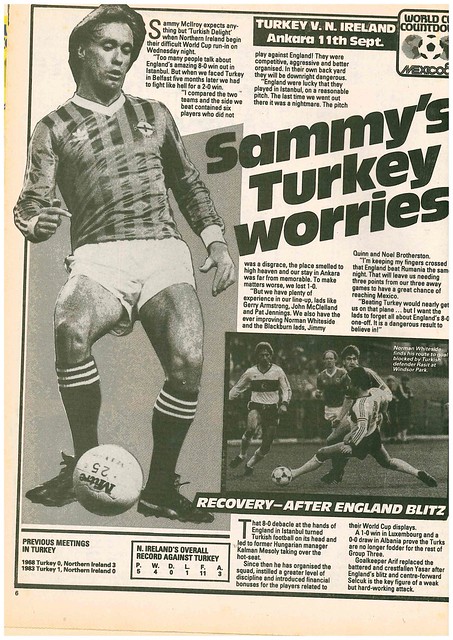 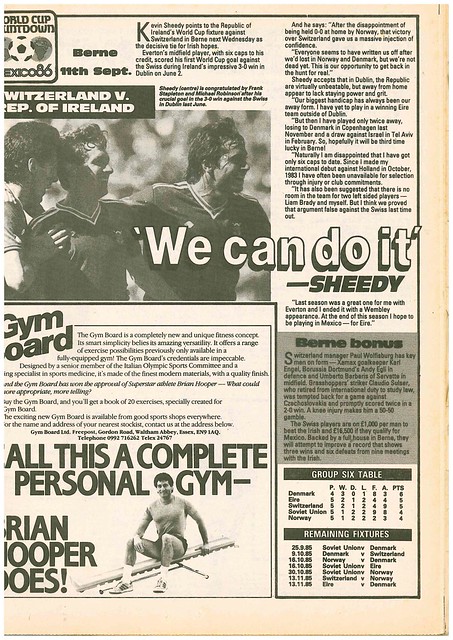 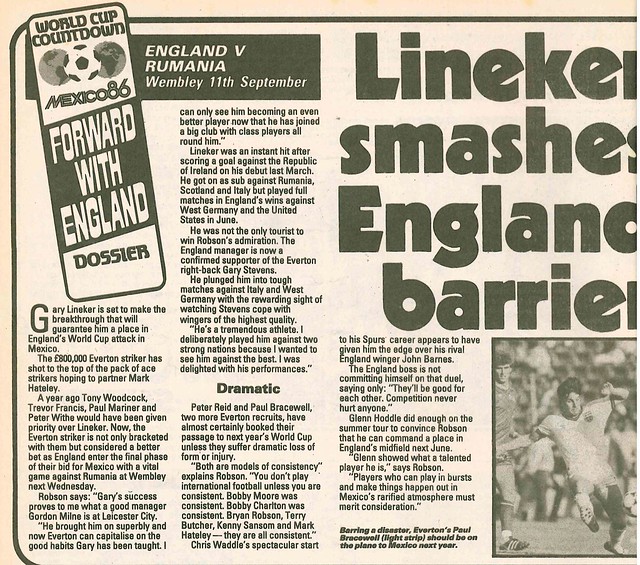 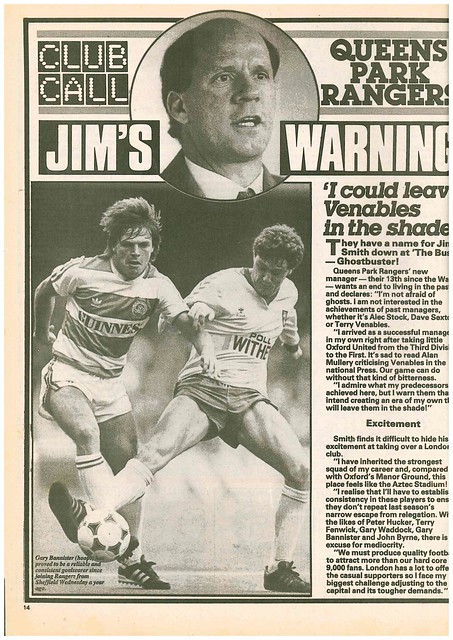 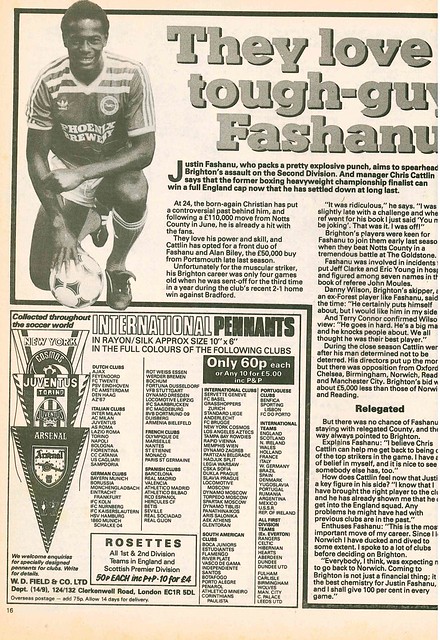 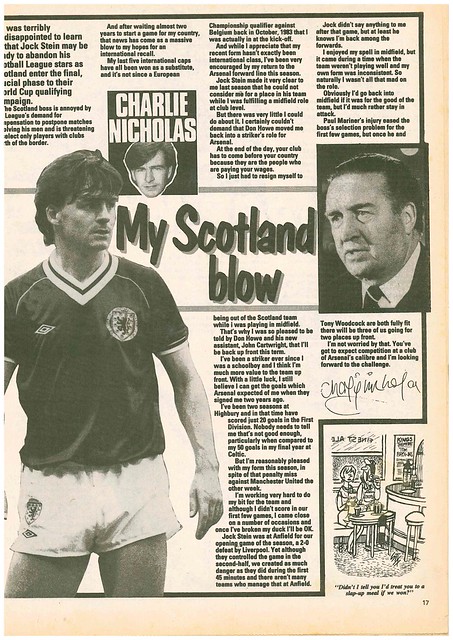 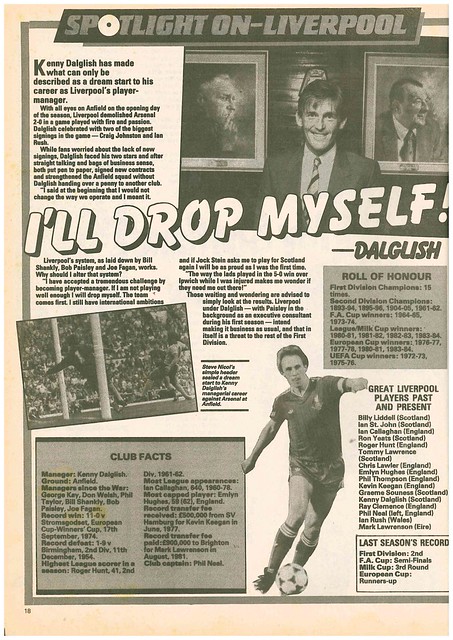 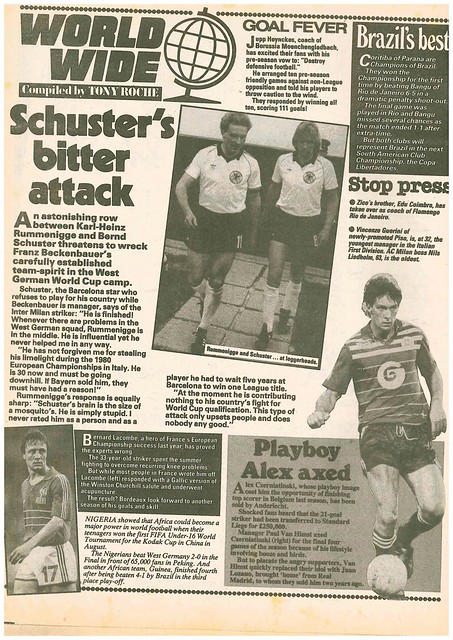 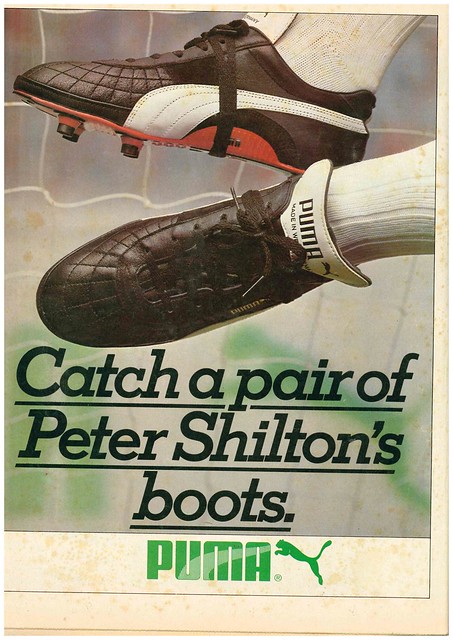 I hope you’ve enjoyed the month by month look back at the 2017-2018. The less said about what happened on the pitch, the better.

I took a lot of photos, so i’ve rounded up my favourites.

Feel free to vote for your favourite.

This was taken in June last year when The Oval was being used for filming a movie about Bert Trautmann, and was decorated to look like Maine Road. I went to get some photos.

I specifically wanted one with 1950s Maine Road and 2017 Oval both in the same shot, and this was my favourite from that day.

You have roadworks to thank for this photo.

I was held up heading to Ards v Linfield and missed the first couple of minutes.

This was the scene that greeted me as I entered, a crowd with their eyes fixated on the pitch on a warm summer evening.

You may be surprised that Robert Garrett is attacking and not defending, he had just kept the ball in play and was now being surrounded by two Dungannon defenders.

I just like the composition of this shot. Taken during Spartans v Linfield in Scottish Challenge Cup.

Me being arty farty. I love trying to get pictures of rainbows over football grounds. Taken at half-time during Ballinamallard v Linfield in November. A rare time that afternoon when it wasn’t raining.

Same match, everyone huddled in the stand to avoid the rain. I like the composition of this shot.

Taken during the Northern Ireland v Switzerland match in November, green and white flags were left out before the game for fans to wave. I decided to take a shot as they were being waved and got lucky.

Everything fell into place for this shot, the sky, a well worked goal, and the whole team coming together to celebrate.

I like this shot because it captures the emotion of a last minute equaliser as part of a late comeback that never looked like coming.

I was heading to the exit for a quick getaway (in my defence, it was an away game on a weeknight) and stumbled upon this framing as Matthew Tipton looked on as Warrenpoint took on Linfield.

Taken during Cliftonville v Linfield in February, the guy in the red coat makes it makes it with his celebration as Linfield players celebrate in front of their fans.

November’s football watching began with a long trip to Fermanagh to see Linfield beat Ballinamallard 6-0 in the pouring rain.

Up next, was Northern Ireland’s World Cup Play-Off against Switzerland. The following day, I headed to Ballymena to see Linfield take on Ballymena, giving me two disappointing results on successive days.

Results took an upturn in the final weeks of the month, as I headed to see Linfield beat the top two in the League, Coleraine and Glenavon, in successive weeks.

That was then followed by taking in Linfield’s defeats against Coleraine and Crusaders.

Thankfully, the month ended a bit better, as I went to see Linfield beat Ards

September’s football watching began for me in Edinburgh, seeing Linfield take on Spartans in the Scottish Challenge Cup. That was followed two days later with World Cup action, as Northern Ireland took on Czech Republic at Windsor Park.

After that, it was all about Irish League action, taking in Linfield’s matches against Glentoran, Crusaders, Ballinamallard and Cliftonville.

November began with a long trip to Fermanagh to see Linfield take on Ballinamallard. It was raining goals and raining rain as Linfield won 6-0.

From going West, it was going East that was next on my agenda, as Northern Ireland took on Switzerland with the aim of going to Russia. They lost 1-0.

The following day, it was a trip to Ballymena, to see Linfield lose 2-1.

The following Friday, the entertainment was of a musical variety, as The Killers came to The Odyssey.

The photos continued on a musical theme, getting photos of a Run DMC mural in Belfast, as well as some Street Art beside Apache.

It was back to football, seeing Linfield beat Coleraine and Glenavon.

The last day of the month saw me cycle to Lisburn to get some Street art photos, including a mural of Top Cat.

The Killers live at The Odyssey

The Killers live at The Odyssey Photo Album

In the first week of October 2017, I headed to Windsor Park to see Northern Ireland take on Germany in a World Cup Qualifier.

That was sandwiched inbetween me going out around Belfast to check out Street Art which was painted as part of Hit The North, these pieces were still works in progress when I went to photograph them in September

The following day, I went to my one Rugby match a year, as Ulster beat Wasps in the European Cup.

It was back to football the following day, seeing Linfield take on Coleraine.

There was a glut of concerts towards the end of the month, going to see Paul Heaton and Jacqui Abbott, OMD and Liam Gallagher, with Linfield’s matches against Ards and Crusaders sandwiched inbetween.

Paul Heaton and Jacqui Abbott live at The Limelight

Liam Gallagher live at The Odyssey

September 2017 began with a road trip, and a long one at that, to Edinburgh, to see Linfield take on Spartans in the Scottish Challenge Cup.

Two days later, it was another football match with an international feel, an actual international, as Northern Ireland took on Czech Republic at Windsor Park.

The following weekend was busy, taking in Ryan Adams at Ulster Hall and then Linfield’s match against Glentoran.

There was more football to follow, taking in Linfield’s matches against Crusaders and Ballinamallard.

The following weekend was football free but not photo free, as I was out capturing Culture Night, and Street Art painted as part of Hit The North.

The month ended with a trip to Solitude to see Linfield take on Cliftonville. The less said about which, the better.

March 2017 began for me with a trip to Seaview to see Linfield beat Crusaders in an Irish Cup tie. That was followed a few days later by my first concert of 2017, seeing Blossoms at The Limelight.

It was then back to football for a Monday night match between Linfield and Cliftonville, and then returning to Windsor Park the following Saturday to see Linfield take on Ards.

I was then out on the trail of Street Art, getting photos of a mural of a Dancer in Belfast City Centre.

The following weekend, I headed to Fermanagh to see Linfield get a late win against Ballinamallard.

I then headed out again in search of Street art, getting photographs of a new mural of East Belfast legends.

The month ended with a trip to Windsor Park to see Northern Ireland take on Norway in a World Cup Qualifier.

Blossoms live at The Limelight